The Gardners » Archives for December 1994

I seem to remember 1994 as being a year at work that passed pretty much without incident apart from a couple of traveling highlights. On the domestic front, I apparently didn’t do much other than a couple of days out and a big old long holiday in the summer. Apologies for this post having a lot of photos of America. The alternative was to create 15 separate posts. Nah ! One will do, it’ll just have to go on for a bit.

So in approximately chronological order, these are the things I did in 1994 which seemed worthy of remembering with photographs.

In the spring, my old school friend Doctor Sime got married at Clumber Park.

And then in the late spring I was invited to make a business trip to Houston to do some presentations on the work I was doing at the time. It gave me a chance to meet up with a few old workmates from the Grangemouth days who had since migrated to a new project in Houston. I think I visited an oil refinery in Sweeny (which I didn’t photograph) and the Houston Space Center (which I did) – I had an unplanned weekend to kill after being invited to meet with a second set of clients (who ultimately never turned up). And one of the guys managed to get some tickets to see the Houston Rockets and kindly included me in the invite list, which was good.

Around the August Bank Holiday I drove down to London for a house party organised by another old workmate, and in the process we went over to Hampton Court. How the other half lived, huh ! Although this may have been in May rather than August. My memory is somewhat fuzzy, to say the least. In fact, judging by the daffodils on one of the pictures, I would say that May is a better bet than August. But I can’t remember whether it was before or after Houston. 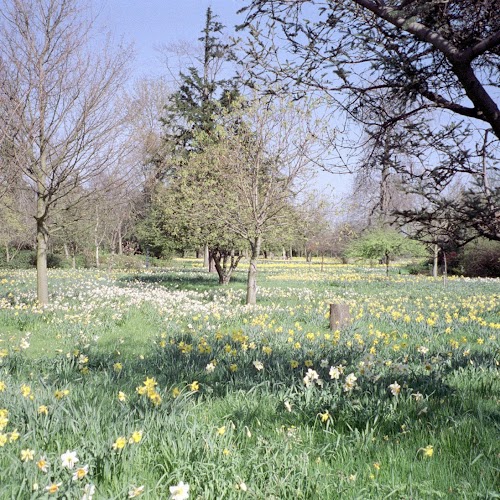 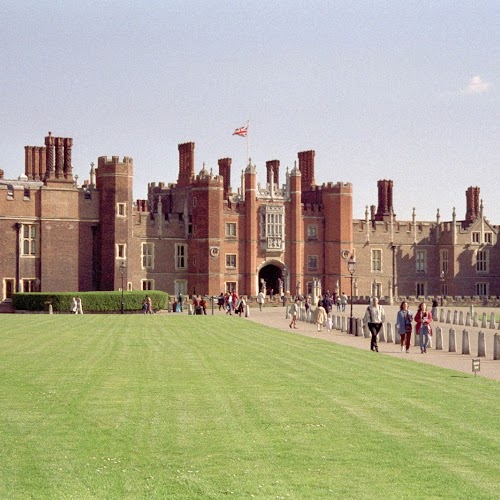 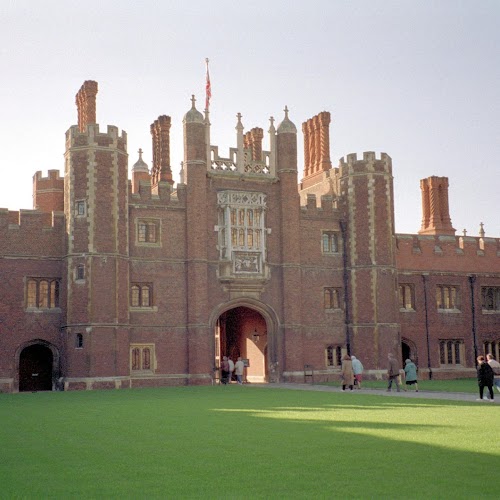 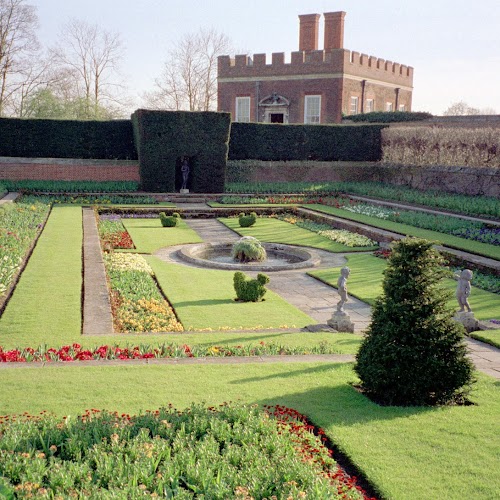 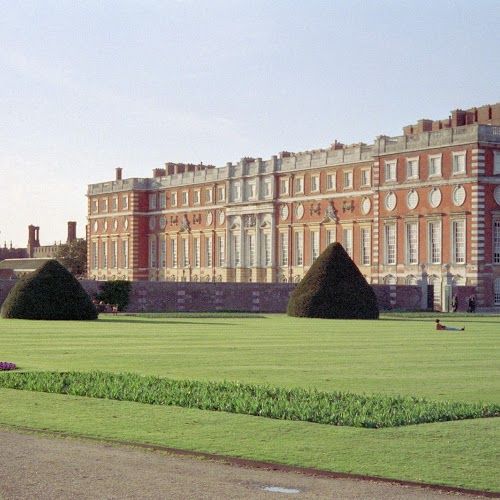 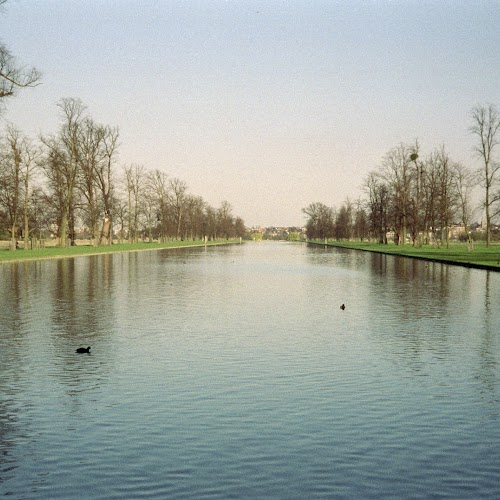 So I guess the highlight of the year was a long holiday in the great American Southwest. The official excuse for going was the old workmate “Big Phil” was getting married to a local in Denver – going native, as it were. There was no particular need for that trip to take the 17 or so days it did, other than that it’s a long way to go for a short stop. So Brewster and me made our way over to Denver from London, and picked up our rental car looking forward to a good old drive around the place. No particular plans – one doesn’t do that kind of thing on a road trip – one just goes where one feels like, don’tcha know ! Aside from booking a hotel for your first few nights, that is.  We met up with a whole host of old workmates in Denver. Kipper and Muscat arrived from Singapore via Los Angeles, I think, and I remember Mark, Stevie and Andy popping up from wherever they were at the time.

So we started with 3 days in Denver, including a bit of a walk round the downtown area, a drive up to the Red Rocks Amphitheatre (where U2 recorded their concert film Live at Red Rocks. Technically I suppose U2 played it and someone else recorded it. I doubt Bono was walking backwards and forwards changing tapes in a cassette player throughout).

And after all that “city break” shenanigans it was time to get on the road and see ourselves a bit of geography, and quite a lot of geology. It’s a good area for that kind of thing, by virtue of there being not many trees hiding it all.

First day out of Denver we drove down to Colorado Springs and went for a walk around the Garden of the Gods. And then we drove up and down Pikes Peak. Then to finish our day we drove over to Cripple Creek and finished our day by staying over in Pueblo  – I remember the lady at the check-in of the motel thought it strange we were on holiday in Pueblo. Don’t worry, we’re not stopping long !

On the next morning we drove over to the Royal Gorge near Cañon City, which is apparently has the highest suspension bridge in the world (i.e. the biggest drop underneath). The bridge itself is narrow, not fit for vehicles, and could best be described a “rickety”, but it’s quite impressive to walk across. The guide books also say that Cañon City in the 19th century had a choice between hosting the State Prison and State University of Colorado and plumped for the former, obviously believing there was no money in education. This might be an urban myth, but whatever, the two big universities in the state ended up in Fort Collins and Boulder whilst Cañon City is home to the Colorado Territorial Correctional Facility (which is a big name for a prison).

After this we went to the Great Sand Dunes National Park a little further west. At the time it was only a National Monument, having been upgraded to a National Park in 2004. The dunes weren’t upgraded though – they were big and sandy enough already. From here we picked our way quite a long distance across country and spent a night in Taos.

The next day we traveled over to Santa Fe to marvel at the adobe everythings and wondering at the huge mouthful of it’s full name ( La Villa Real de la Santa Fé de San Francisco de Asís ). I also bought an Australian style slouch hat, which won me an accusation of being Australian on more than one occasion. We spent that night in Santa Fe. Apparently neither here nor Taos were worthy of any photos though.

So the next morning we headed of west towards Arizona, driving around Albuquerque and joining I-40 heading west. We parked up in Holbrook after doing about 300 miles in the car.

The next day promised to be more interesting. Starting from Holbrook our first port of call was the Petrified Forest NP just out of town. Fantastic stuff – this is what a drive in the desert should be about. Hot, dusty, not many people around, Park Rangers from Yorkshire (not sure how that one got in there), that kind of thing.

And from here we decided to head over towards Flagstaff, making a stop at Meteor Crater on the way. Home for the night was a random non-descript motel on “the strip” just east of downtown Flagstaff. It had been a long day and we were glad of it.

I think we must have stayed 2 nights in Flagstaff, or moved up to Tusayan, because we did far too many things to have stayed there just one night. There was definitely a late afternoon stop-off at Sunset Crater Volcano National Monument.

And a considerable amount of Grand Canyon. 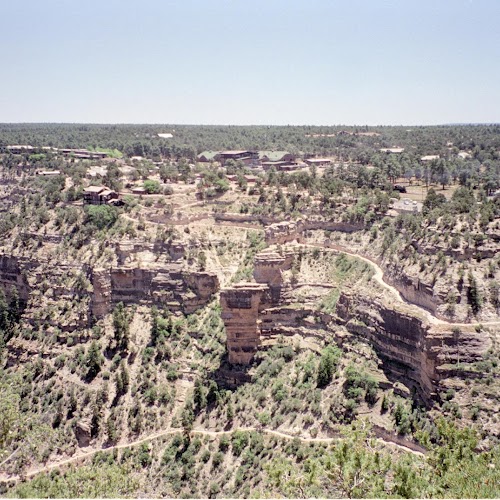 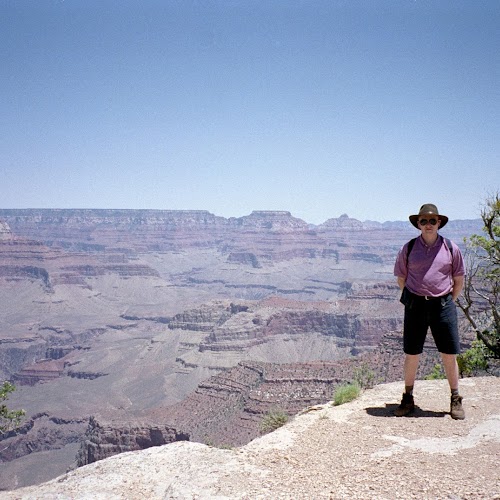 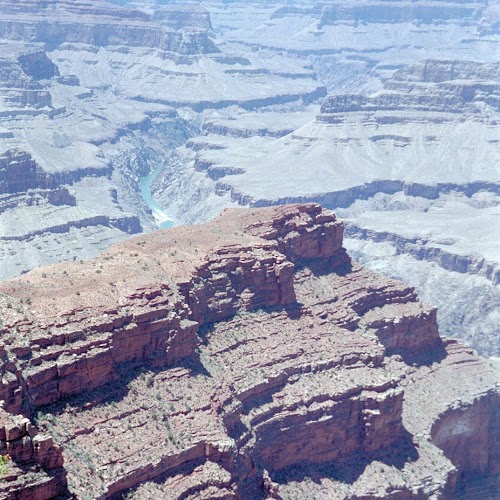 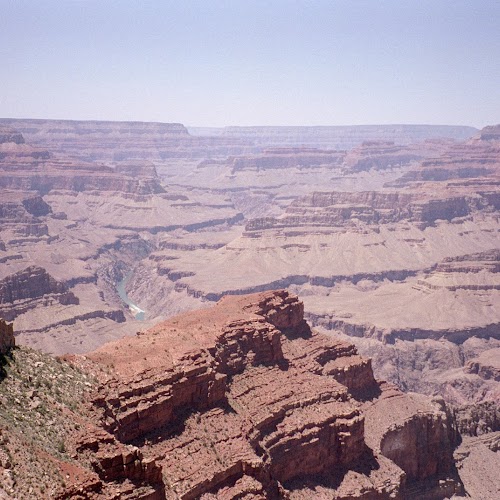 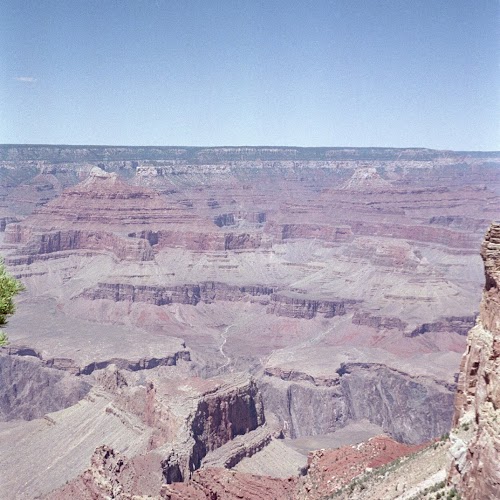 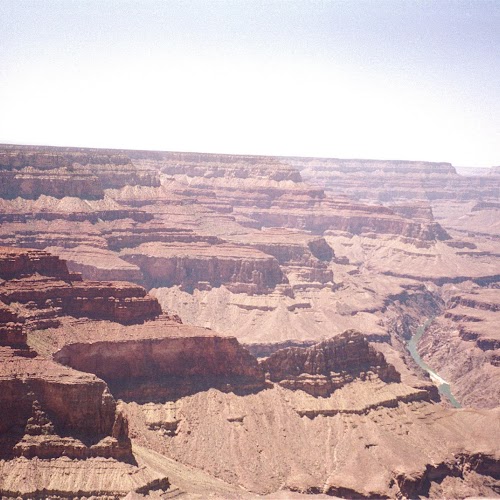 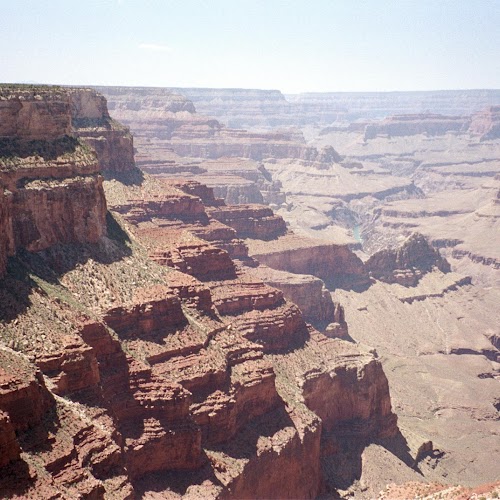 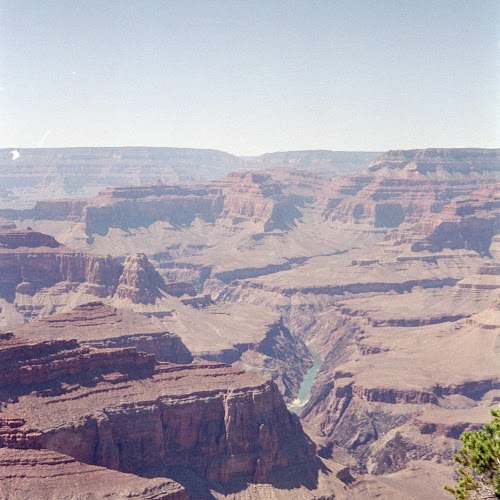 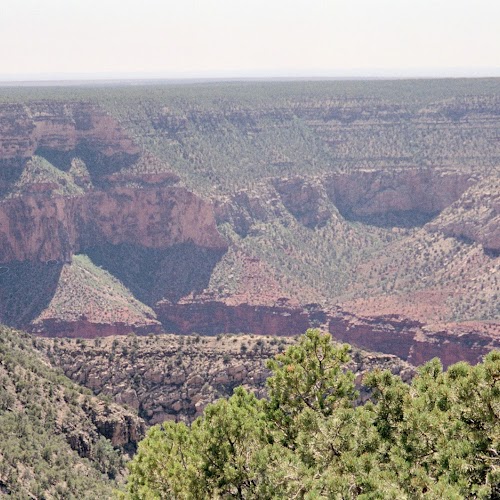 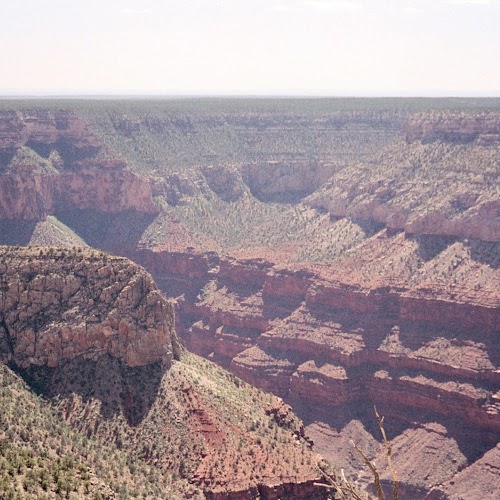 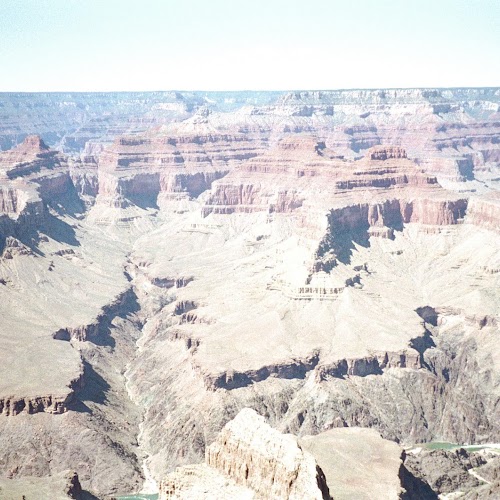 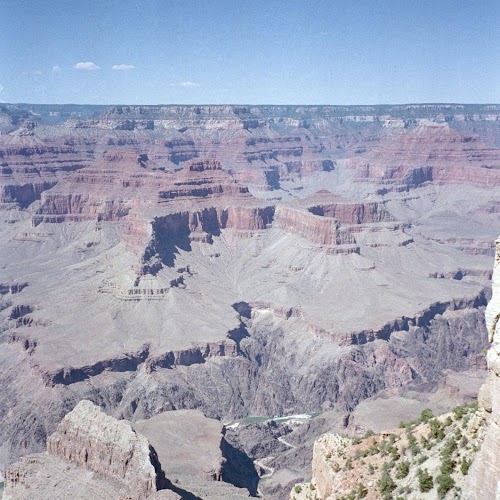 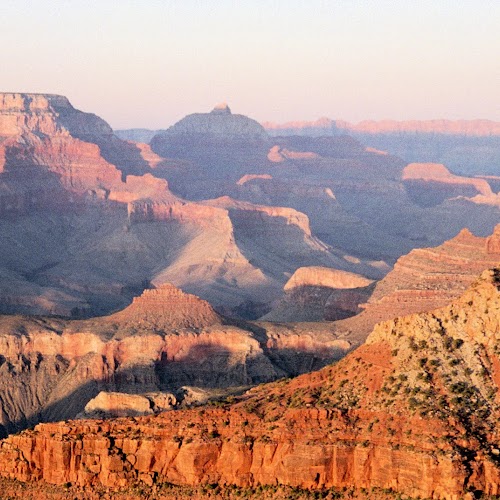 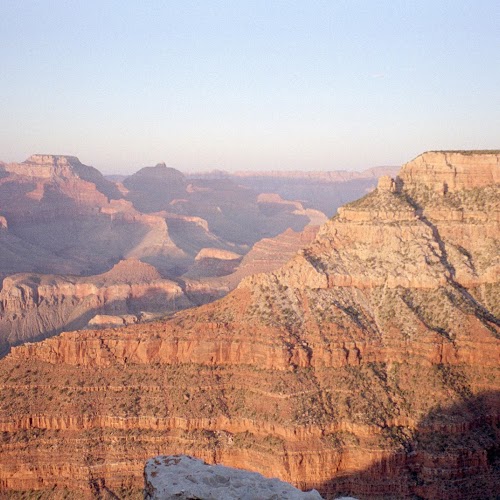 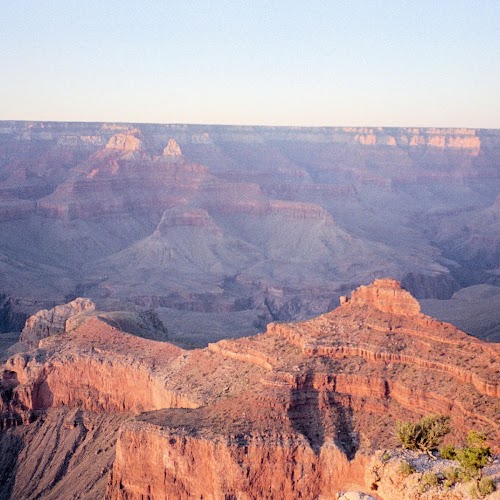 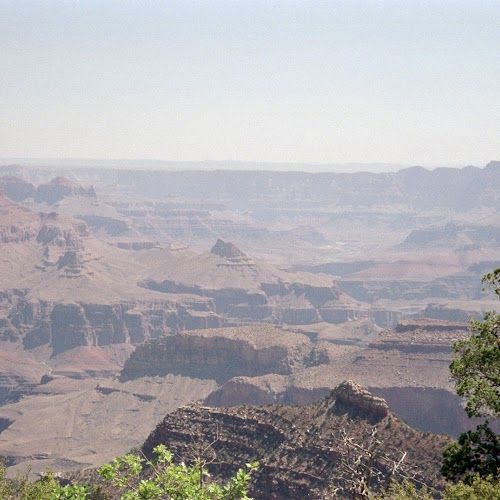 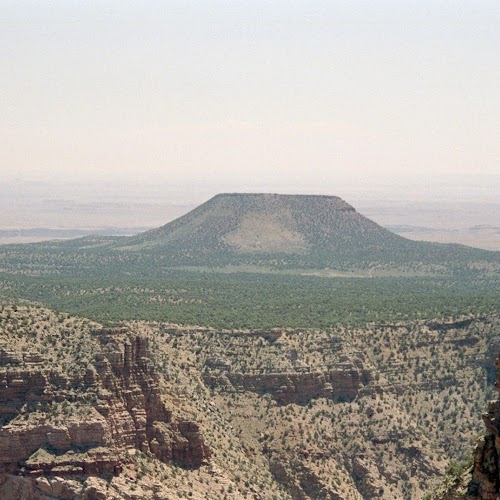 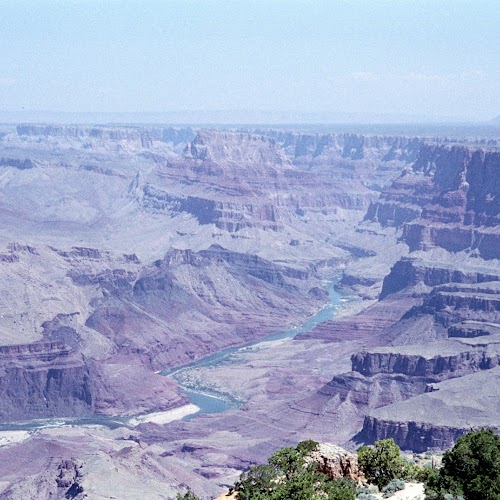 And on departing there we drove up through Northern Arizona and through the Navajo Nation up to Monument Valley, one of the highlights of the trip. More “proper” desert up here. We continued on and spent the night in Blanding, which we thought lived up to it’s name. Something about ending up in a town with no beer.

Next day we were heading north towards Moab, but first up we “popped” round to the Natural Bridges NM.

Whilst in Moab, two things came as nice surprises. Firstly, it’s not a dry town. In fact, it has a couple of nice breweries making a selection of fine ales, most of which were given a good testing. I remember a chili flavoured one. Secondly, both national parks there are spectacular, albeit in different ways. On our first morning there we went over to Canyonlands NP. To say we “went” there would be a little unfair. We touched the surface. It is a proper wilderness and is quite large in size, so we went to an area of the park on its east side (the Needles District), and did a bit of a walk, took a few photos, saw a jeep struggling to get down the “road” and decided it wouldn’t be a bright idea to try to get our rented Chevy Blazer up the same road, and generally backed off and went home for some more of that beer.

The next day we went to Arches NP for a bit of weird geology (again).

And then we headed south again. We stopped off in Cortez for a quick visit to Mesa Verde NP and carried on for another night in, I think, Montrose and venturing over the mountains back to Denver for our flight home.

Montrose is home to the Black Canyon of the Gunnison NP. As with Great Sand Dunes, this has also been upgraded from National Monument to National Park since we were there.

On the way over the mountains we made a lunch stop in Breckenridge before joining I-70 for the drive back down off the Rockies.

And then we flew home.