The Gardners » Archives for September 2011

Getting on a Bit

It was “The Other Stu’s” 40th birthday, apparently, and he’d decided to celebrate the occasion by dropping a load of tupperware around the countryside of Bedfordshire. He arranged a celebratory caching event at a pub in Ridgmont which we attended as a family of four. It was a very pleasant Saturday afternoon and perfectly fit for sitting outside and eating outside, despite it being September.

We met a few of our now fairly familiar caching friends at the event and say for a chat and some lunch for a while before heading off for a bit of a walk around the fields with Wavvy. We headed of for a fairly self-contained loop which lead over towards the M1 from the pub. It basically involved two large fields with a number of caches placed around the outside. Somehow here we managed to find both bonus caches for the series too, despite only having done about a third of the caches. There was probably some creative information gathering involved in that part, but we don’t talk about things like that.

Anyway, once we’d done at the pub we stopped off to grab a couple of random Church Micros before driving home.

The following morning looked like being a quiet one so I agreed with Kas I could get up early and go to attack the rest of the series (while they were hot). I parked in much the same place (in Ridgmont village) and headed eastwards to do the caches over the other side of the motorway. This lead me round in a big clockwise loop to cross back over the motorway again somewhat south of the village, from where the course took a diversion south across a couple of relatively barren fields. I seem to remember I cut the walking short because a couple of the caches appeared to be a long way away but also by the side of a road. So I went back in the car to fetch those once I’d finished walking.

It was another warm morning and I’d failed to take any food or drink with me, so by the time I finished (after nearly four hours) I was glad to be heading home. It was around lunchtime, as I’d started before 9am to make sure it didn’t take up the whole day.

The caches I found over the course of the two days were : 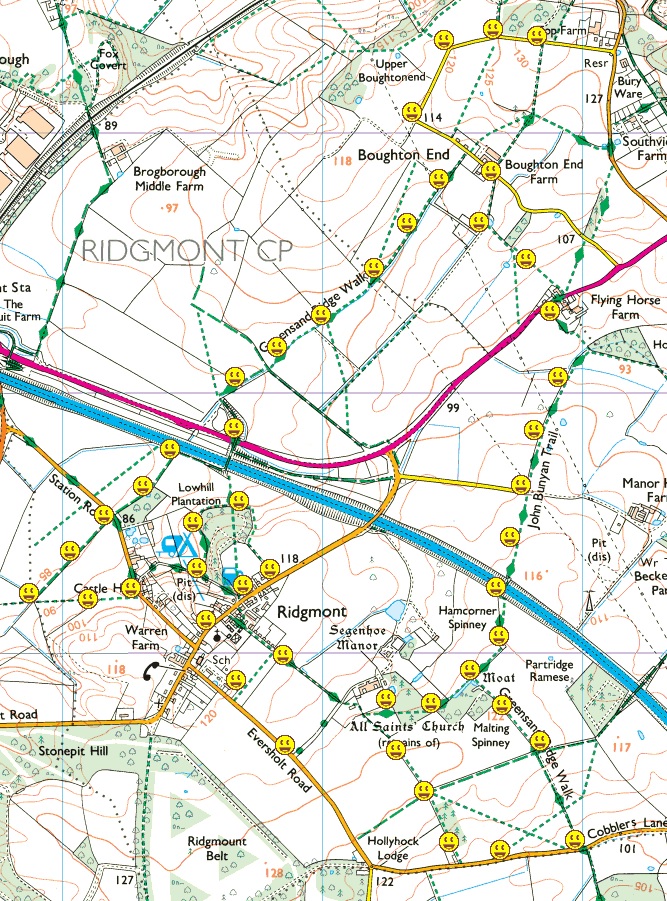 Bats in the Belfry

I’d been in Bangalore all week with work and had an overnight flight back which put me into Heathrow Airport quite early in the morning. I’d got an appointment up in the West Midlands for the evening, as we were having a win party for a bid I’d been working on earlier in the summer. The event was being held at The Belfry golf resort. The timings were such that it seemed a bit pointless going home, as the girls would all be working or in school, so I wouldn’t have seen anyone anyway. I therefore just drove straight up the M40 to Birmingham and set myself up for a bit of caching. I’d travelled in clothes suitable for caching and had some time available before I’d be able to check into my hotel room, so I thought I might as well. In fact, I’d sort of anticipated the possibility and had solved a few nearby puzzle caches to spice things up a bit.

I started my caching by doing a series on the minor roads running in between The Belfry’s many golf courses. Most had convenient parking nearby, although a few drew some disapproving stares from golfers, not that I minded that. I don’t like golf at the best of times. I particularly don’t like people playing golf and looking down on others like they don’t exist.

So after finishing that little series and passing by Aston Villa’s training ground for another, I headed south a bit towards Curdworth and did a few out in the countryside.

By this time it was getting later and I would be able to get into the hotel room, so I scooted off to do that. I didn’t really have much time left to grab a snooze, so I just got ready and set off for the evening event, at which I was a total zombie, having not seen a proper bed for about 40 hours. Never mind, at least my employer was paying for me to be in the hotel, which essentially means I got a day of caching at their expense.

On the following morning I grabbed a couple of other nearby caches on my way back home.