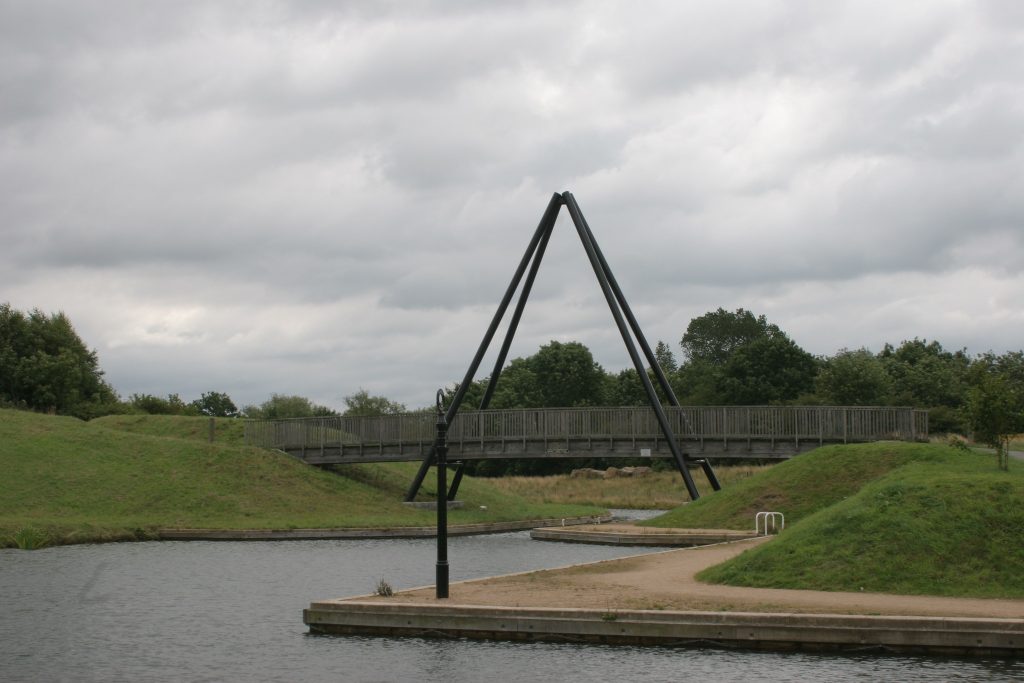 Blimey, wasn’t the weather nice today. Shame to be stuck inside for most of it working.

Back to the plot, I’m visiting my parents over the half-term week and have a fairly intensive programme to complete if I’m going to keep filling up The Matrix, so I needed to scoot out at some point to go grab a cache or two.

The closest non-smileys to here are over at Donisthorpe, a couple of miles away. Donisthorpe appears to be completely devoid of photos, at least as far as Wikipedia is concerned, but seriously it isn’t quite that bad. This whole area used to be fairly heavily into coal mining within even my living memory. My maternal grandmother’s second husband used to work at Rawdon Colliery, which also needs a Wikipedia entry writing. Much of Conkers Discovery Centre in Moira occupies land that used to be Rawdon Colliery, and the access road to the “Waterside” site at Conkers is along a street called Bath Yard – the former home of the pit bath house. It’s now been upgraded a little bit and is home to one end of the Ashby Canal, and has this natty little marina and bridge. Not many boats yet though, because the canal only goes about a mile and a half and doesn’t connect to any other navigable waterway. It’s also where the Conkers Parkrun starts from, so we know the area quite well. In fact Donisthorpe Woodland Park, and that’s where Conkers Parkrun goes too, innit ? It’s also where the Ashby Canal finishes at the moment. There used to be a bunch of caches in there, some of the first we ever did. Then they disappeared. Then a few more appeared.

And at the risk of getting all nostalgic, like, then came the 1980’s, so coal mining wasn’t in favour any more and most of the collieries closed. They were replaced by the succession of newly prettified woodland parks, lakes and activity centres that are the National Forest. No politics please. Whatever your views on the 1980’s the mines would have closed by now anyway, ‘cos there’d be no coal left. I should know – I spent 4 years at University in the mid-1980’s studying mining.

Let’s just say there’s a lot of immature trees, artificial lakes and suspiciously straight-sided hills round here and leave it at that, huh ?

My target caches for the day, however, were not in Moira. I was headed to the Hicks Lodge: National Forest Cycle Centre. There were potentially three on the radar, one that’s been here a year and a half (but I never got round to it), and a couple of relatively new ones that were, I believe, released on a day that helps me with my “366 Days Placed” challenge attempt. Result. Much of this area is full of the Grizzlies “GANI” series (Grizzlies: As Nature Intended), but I did most of those over a year ago, so that’s ancient history in caching terms. If the Earth had been formed on the day caching started, “over a year ago” would be before the dinosaurs, that would.

I must try to stop rambling and keep to the point.

So I took advantage of the nice warm weather at lunchtime to pop out for a quick walk and a bit of fresh air. Much needed, because I’ve had a dog of a cold for the last week and a half and I haven’t actually been out of the house since Sunday night, when we arrived.

First up was the rather impressively sized Grizzly’s 10K Celebration – a proper old-skool ammo can, although a spangly new one – see thumbnail at the top of this post. It was also good fun walking down there along a rather slippery mountain-bike track. And there was some undergrowth involved. Enough undergrowth that you might actually called it overgrowth, to be honest.

Second up was the rather more modest GANI : 9 – Stoned and Prickled – from the name you can take a good guess at what kind of cache it is. I walked right up to it. Job’s a good ‘un, as they say.

And then finally I banged Grizzly’s Silver Wedding Anniversary into the targeting computer to try to make it three, but sadly in the direction I was walking there was no way into the relevant field. I had a quick read of the description and realised I should have turned the other way at the previous junction, but then also decided I wouldn’t have had the time anyway, so I took a few more photos and mooched my way round the rest of the lake back to the park.

One small but significant highlight of the day – I didn’t have to pay to park because someone gave me their all-day ticket, so I handed down the favour to someone else as I was leaving. The receivers offered me money for my ticket. I told them I didn’t pay for it anyway, so “whatever”, buy yourself a coffee and feel happy ! But thanks for offering to pay for it.

Got a few nice photos too………..And I went back the following day to get Grizzly’s Silver Wedding Anniversary