I’ve been thinking about the Halloween Hides & Creepy Caches (Reincarnated) Mega Event for much of the year.

I went to a kick-off event in Northampton on the same day as I had my own event at Stowe all the way back in April (see Stowe Series Release). I seem to remember back in April it was a bit cold and damp, much like HH&CC event day in October.

Back to the plot, the plan was to get up to the event by 10, ready for opening time. I volunteered to take Wavvy and N12 with me – better to take a car full than to go alone. Saves the planet, keeps the cost down, and makes for more interesting stories………

Such as going to help Wavvy check his coordinates for the Milton Keynes Boundary Walk Golden Bonus, and not being able to find it, for instance. Can’t say where it is, but it was on the way. Suffice to say we got to GZ on Wavvy’s GPS and he had no recollection of the area. GZ on the iPhone was about 35 feet away, so we went there instead, and there was the cache, all shiny looking. Hmmm ! Must be something to do with triangulation of the cell towers or something. Anyway, one-nil to the iPhone.

N12 was well prepared when we arrived, despite saying she was expecting us at 10am – what’s that about ? She’s ready to go out an hour before we’re turning up. An hour before I’m going out I’m normally still in bed, especially when Kas and the kids are away, like today. In fact, it’s a bit of a miracle I was ready when Wavvy turned up, never mind an hour beforehand.

But meanwhile, back at the event, we made a relatively uninteresting drive of 35 miles or so up to Stanwick Lakes and miraculously found a parking spot right outside the building – someone was just leaving at 9.45am. So up we parked, and in we went, to meet up with a few familiar faces and a few rather scary characters. Well, it is a Halloween themed event. So we mooched about a bit waiting for the general “nod” from one of the organizers that the daytime caches were released. I picked up my spangly new glow-in-the-dark coin, and we went outside to gawp at the maps showing where everything was, then we heard rumour all was released and we were good to go. So we went.

I started by setting up the details for the WhereIGo released for the event, and we mooched into the first couple of zones, then we were off to the main business of the day. Not quite sure what we were expecting, but we ended up doing a 10 mile walk and picking up about 40 caches over a period of nearly 5 hours. Have to admit that it was a bit more than I anticipated for the first walk, but we can pride ourselves that we found everything we looked for. We did try our best with the two puzzles and also we tried to run about 3 multis at the same time, which proved interesting. But more of that later. Suffice to say that trying to complete one of those elimination grid, “Brian ate more sausages than the man who wore purple socks” logic puzzles is a bit tricky when you’re trying to walk at the same time. Thankfully though, Wavvy, N12 and I had been joined by a couple of others, so we had a nice big team for the onslaught. As we walked around, it became rapidly evident that this wasn’t going to be a day of solitude. For speed, we adopted the name of “Team Wizard” for our happy band, and within the first mile or so we were joined by Poshrule and a handful of others (or, more correctly, we joined them – as in, we caught up with them).

One highlight of the morning walk was passing the football ground. Only a highlight because it wasn’t what I expected. What I expected (quite reasonably, I thought) was that the football ground in Irthlingborough would be the home of Rushden & Diamonds, what with them being originally formed from Rushden Town and Irthlingborough Diamonds. However, unbeknowst to me, R&D were chucked out of everything last year due to there being some issue with finances, and later they dissolved. So Nene Park is, in fact, the home of Kettering Town – a move made last year after their previous ground was repossessed. Obviously financial times are hard for small clubs in Northamptonshire .

Back to the plot though, and not long after here we parted from an increasingly large crowd and headed off around the north of the lakes and onto the 4 (ish) mile “northern” loop that the guys had set up. This took us up into the village of Little Addington and back. Just after the village I felt the need to take advantage of the solitude, as it were. However it was not the most lonely day of caching I ever had. In fact, I only just about had time to do the business before the next team turned up.

At the far end of the walk we came back into the Stanwick Lakes park and then across the other side. Somewhere along here, one of our number decided he wanted to go a bit “off-piste” and cut over a couple of fields to rejoin the old railway line and back to the cafe rather than follow the full route around. At this point in time, the route back had no further caches apart from one that requires some crawling through culverts, so on the face of it the decision looked OK. Once we got over the first field, though, we were wondering at the wisdom of climbing over electrified fences and backtracking around impassable swamps.

Once back at the old railway line we finished our morning (now mid-afternoon) with a pop at a cache in a very large bird hide. I would like to say we found it, but at the time there were about 35 people there (or more) crawling all over the place. This was made infinitely worse by an absolute torrent of wind and slushy, hail-filled rain. enough to cause an enormous cracking noise as a big chunk of a nearby tree snapped off, just avoiding a few people. At some point in the proceedings someone shouted “found it” and the deed was done. We’re claiming a proper find, because it was one of the original “Team Wizard” that found it, although given the number of people it was probably just a matter of time. There was a nice Earthcache just along from here too. Can’t beat an Earthcache.

And then back to the cafe for a well earned drink.

After which we had a further walk out to catch one of the multis we calculated on the way around, and a handful of others that we didn’t pass on the first attempt – our loop took us away. So that was another couple of miles and another 5 caches before returning to the cafe to mooch around next to the now busy barbeque – a round of double cheeseburgers and a natter with a couple of American visitors ensued. Followed by more cheeseburgers / chicken burgers and some coke.

And then a quick walk out across the lakes to grab the WhereIGo with BingBongLong, who we bumped into in the car park.

And back to the cafe for a sit down – legs hurting somewhat.

In the cafe we met a few more friends and then prepped up for the evening event – this time we were named “Team Nightmare”, and we consisted of Wavvy, N12, BingBongLong, EmmaW, Emma’s mum and myself. Another 14 caches in the dark. Unsurprisingly these ran along all the bits of the park we hadn’t been through already, as well as a few we had. Again I would like to say we found some of these, but in all honesty, they were found mainly by just walking towards any group of torches we saw, safe in the knowledge there was a cache in there somewhere. Why don’t people dip torches in the same way we dip headlights in the car, by the way ? Couldn’t see where I was going most of the time. But it was a good walk nevertheless, in good company.

When we walked past the bird hide again it seems the cache was no longer there, or at least, Emma couldn’t find it. Busy day, maybe someone put it back in the wrong place. And then back to the car. In total I walked 15.7 miles during the day, which is a long way, I can tell you. You can see the route at here. Don’t ask me to walk round again. I ache.

But that left us with a bit of a problem. No misses all day, which is good, however a rather disappointing total of 59. That’s a big blouse of a number, that is. 59 just makes you want to say “why not one more then ?” 59 finds in a day is for rank amateurs. “Why not do one more then ?”

So we did one more. No walking, just a random Church Micro in Stanwick village. We drove a couple of loops in the car before finding a way into the car park that appears on satellite view, and we were rewarded with a parking spot about 10 yards from GZ. Someone else was also there doing “just one more”.

The cachemobile got us home safely enough. Wavvy’s car was still outside my house, the guinea pigs were happy to see me (but slightly hungry) and in the morning I found N12’s blood-stained knife in the back of my car. Oh ! And the plastic axe I bought off eBay to wear on my head was still on the dining table, where it had been all day. 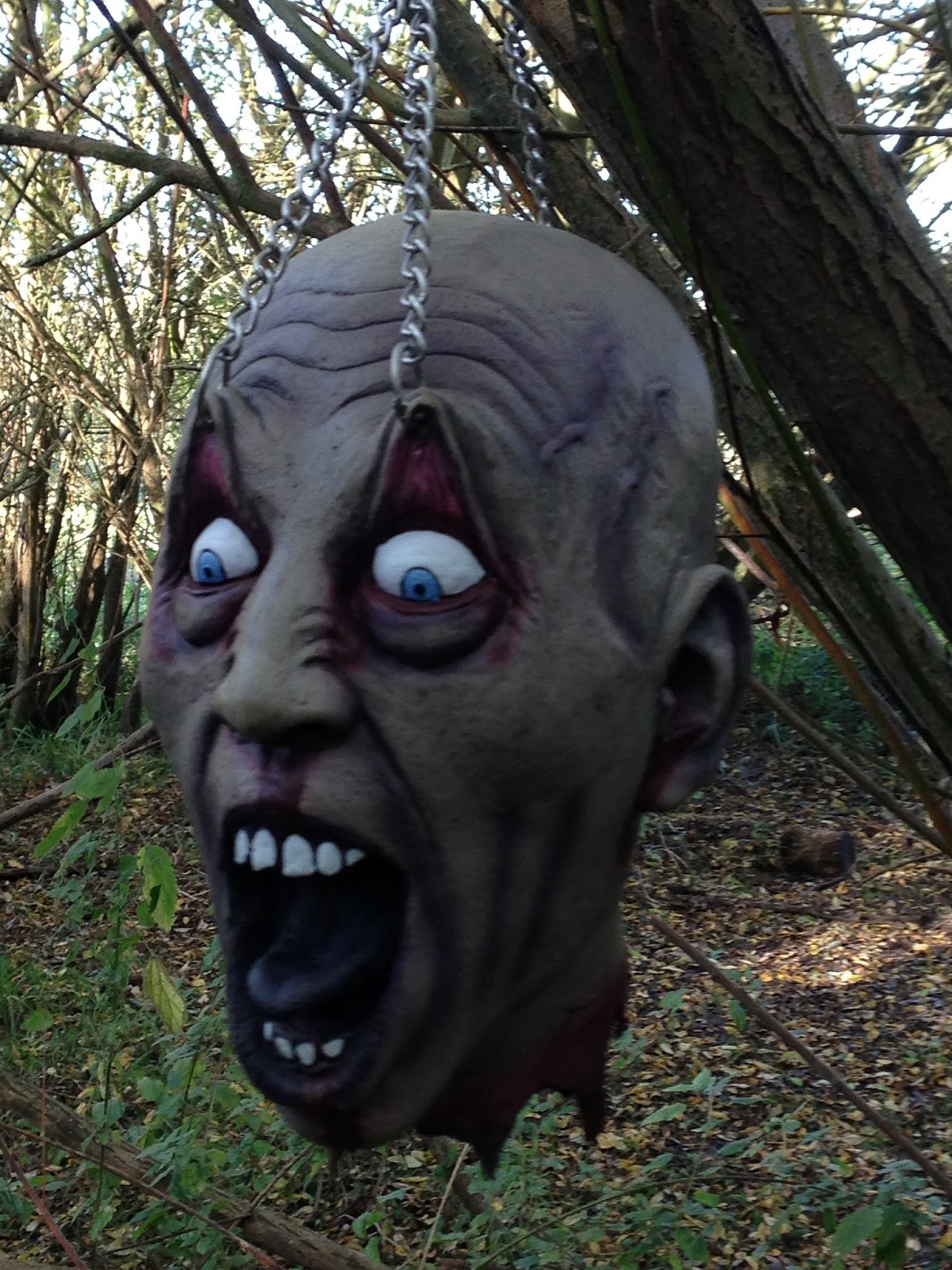 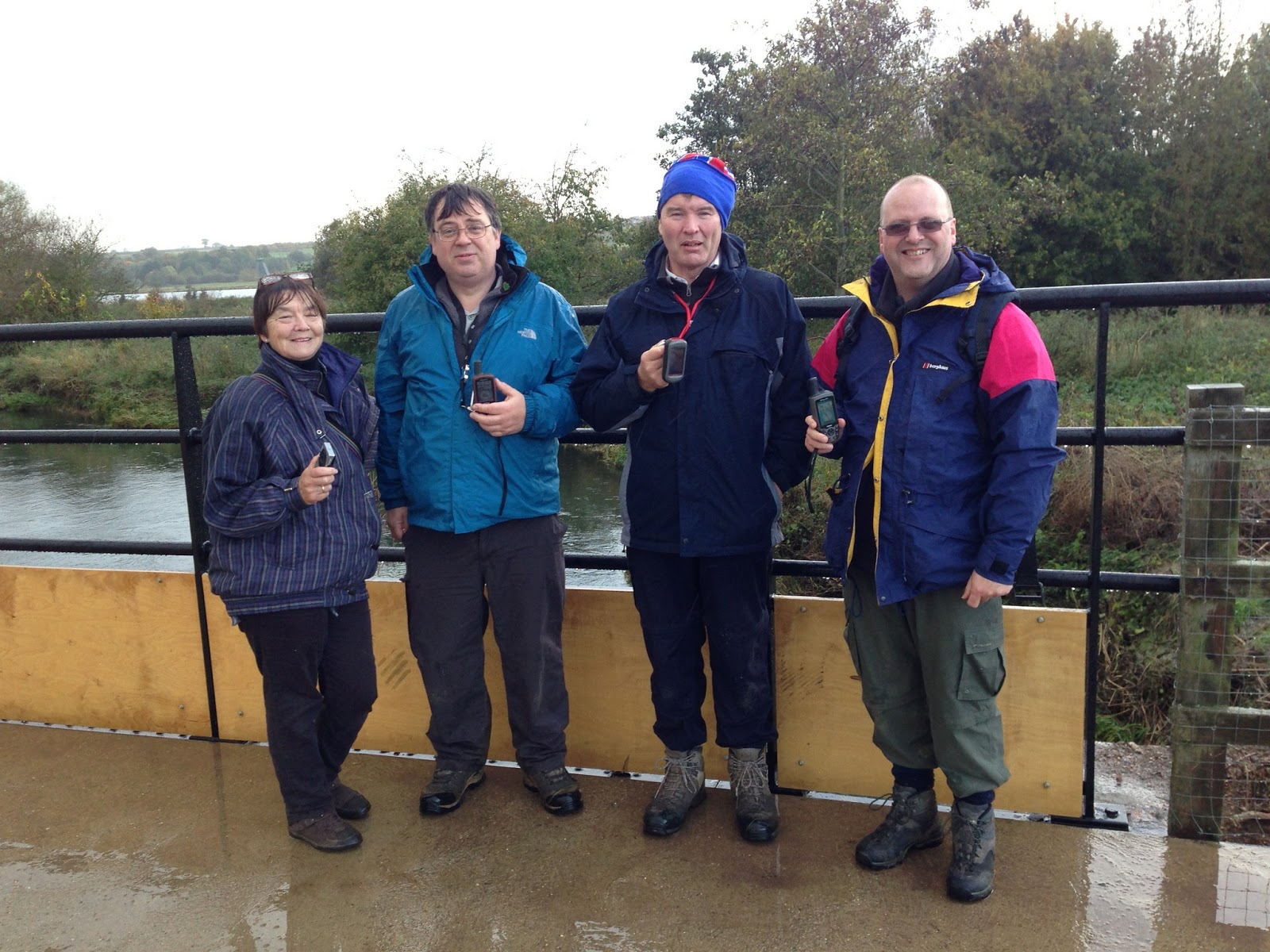 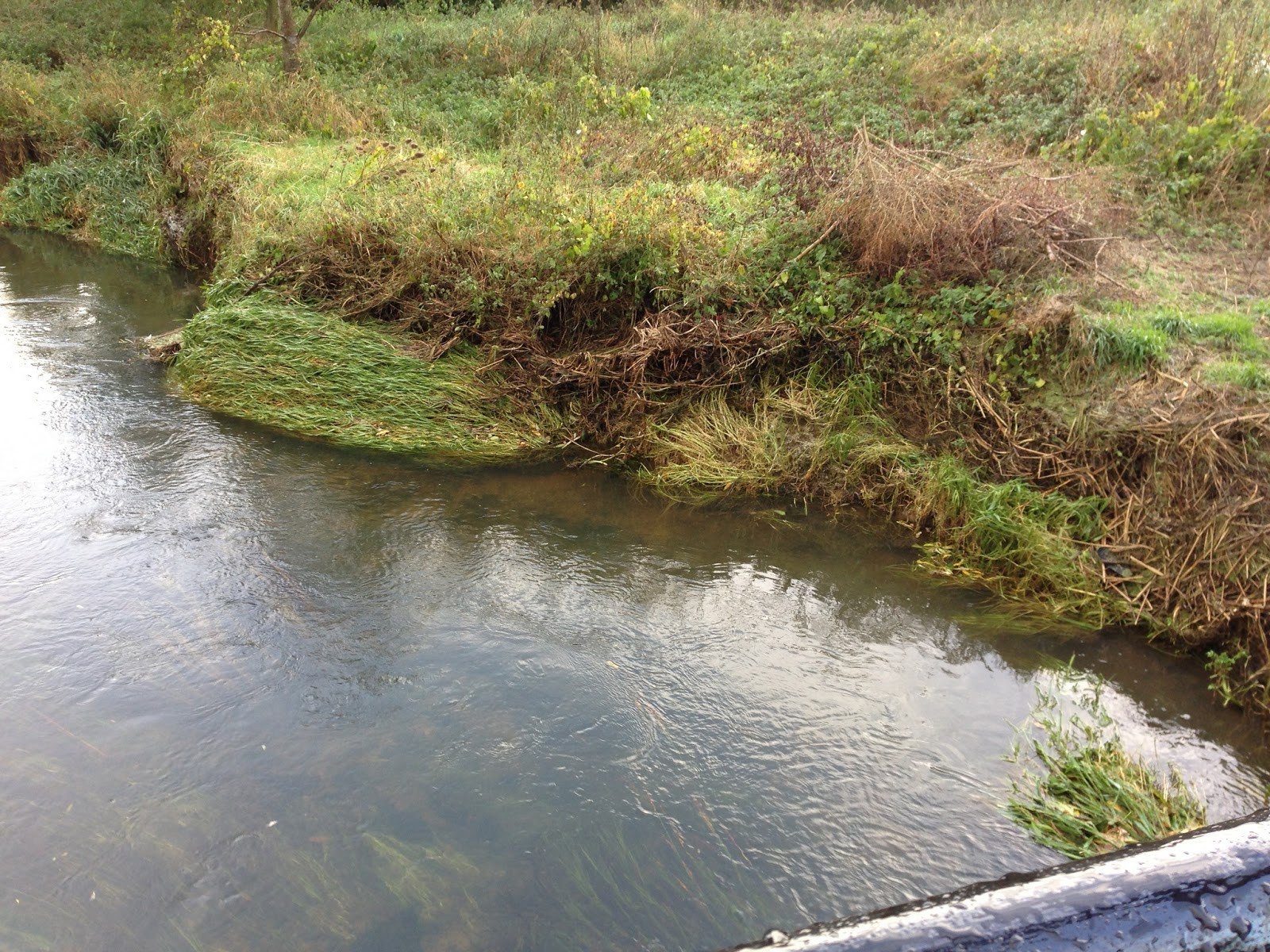 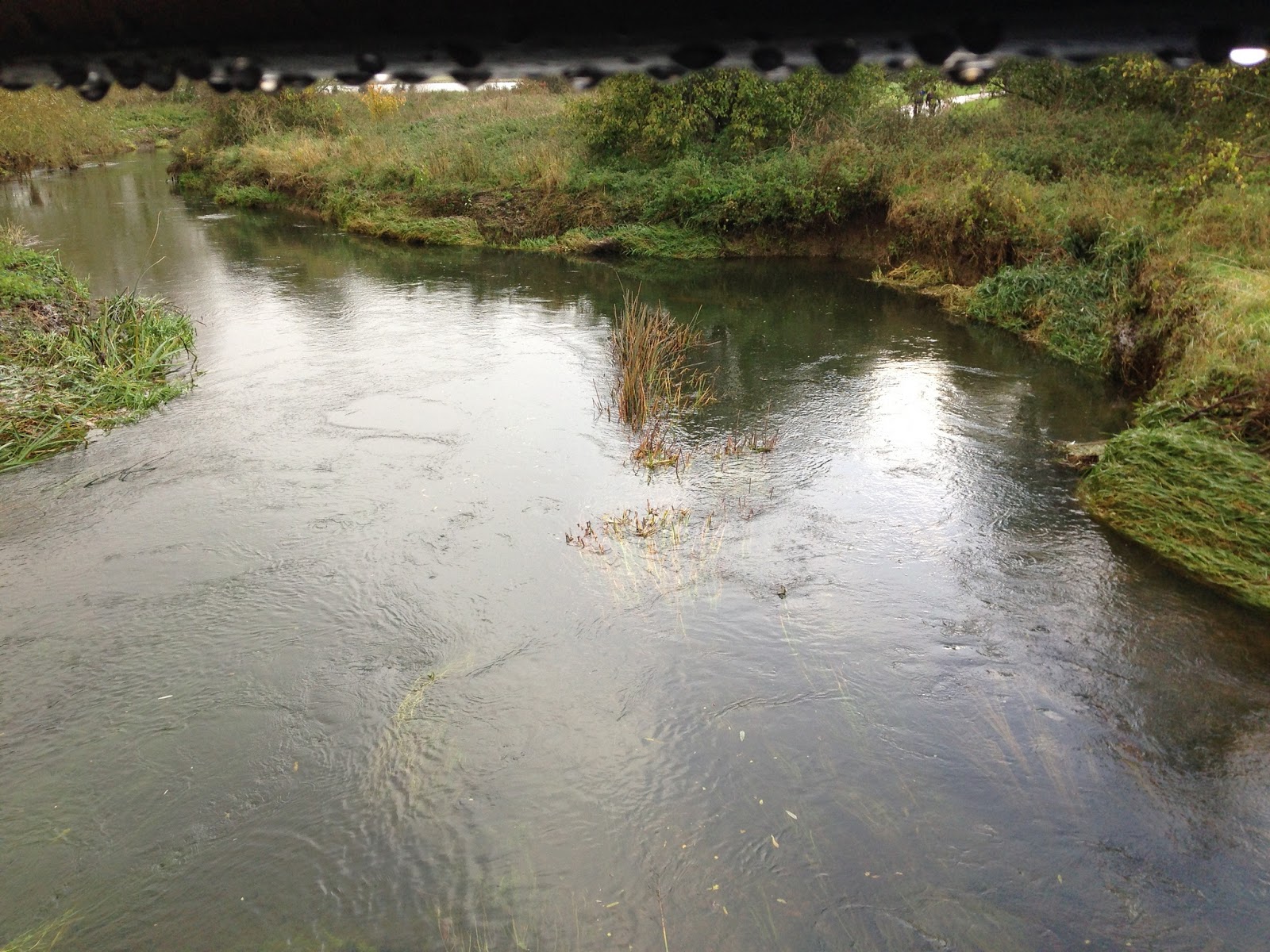 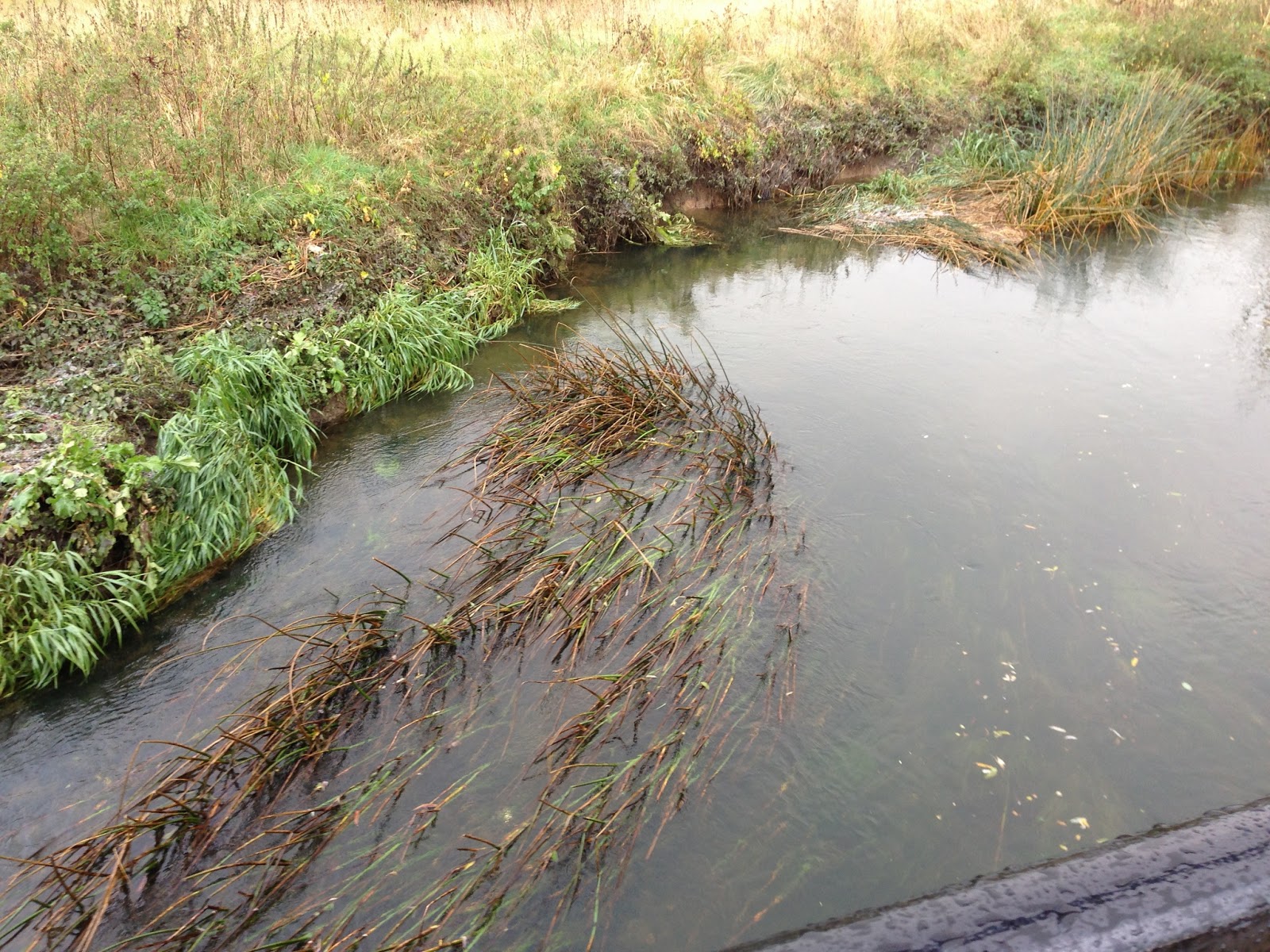 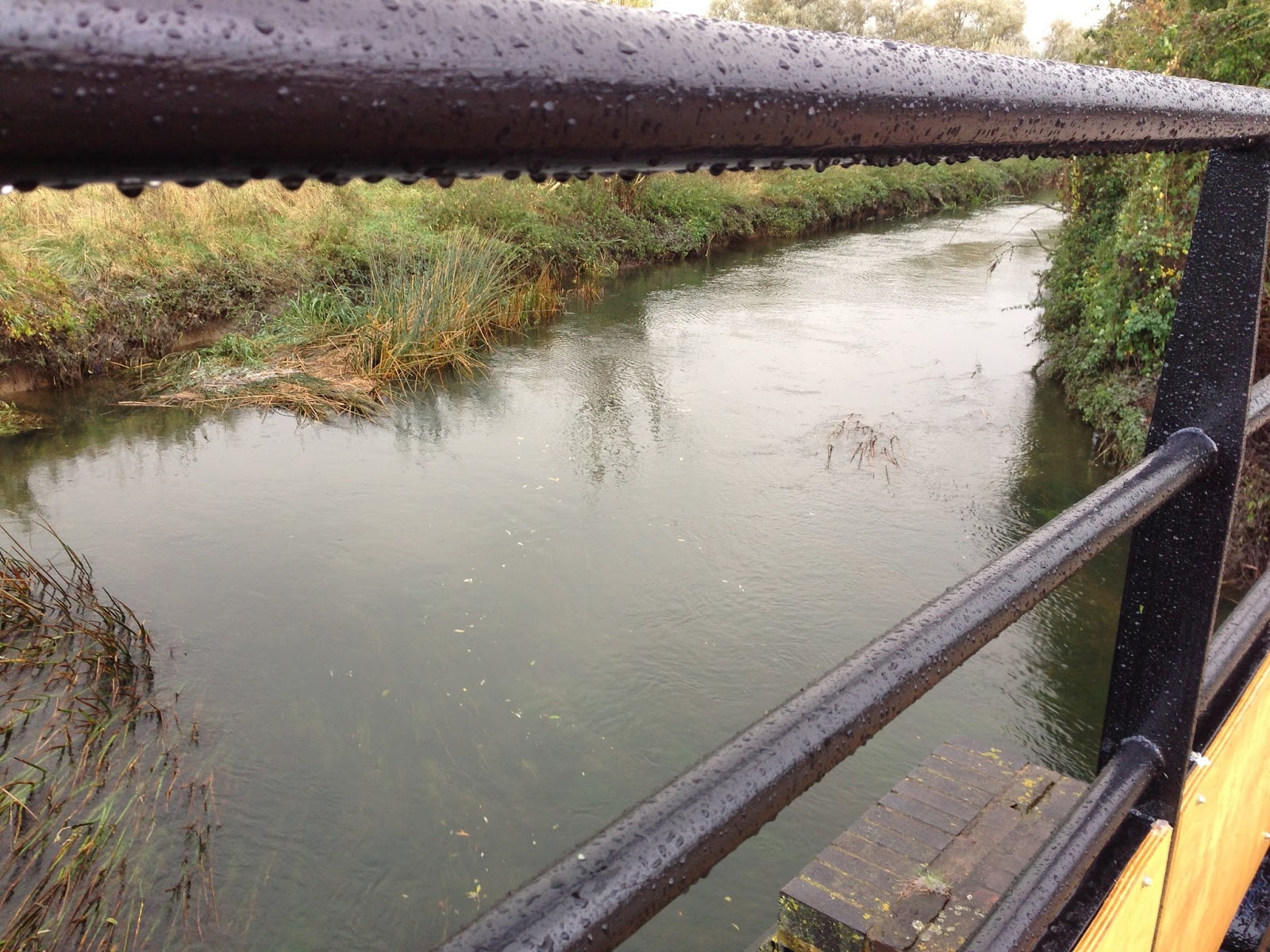 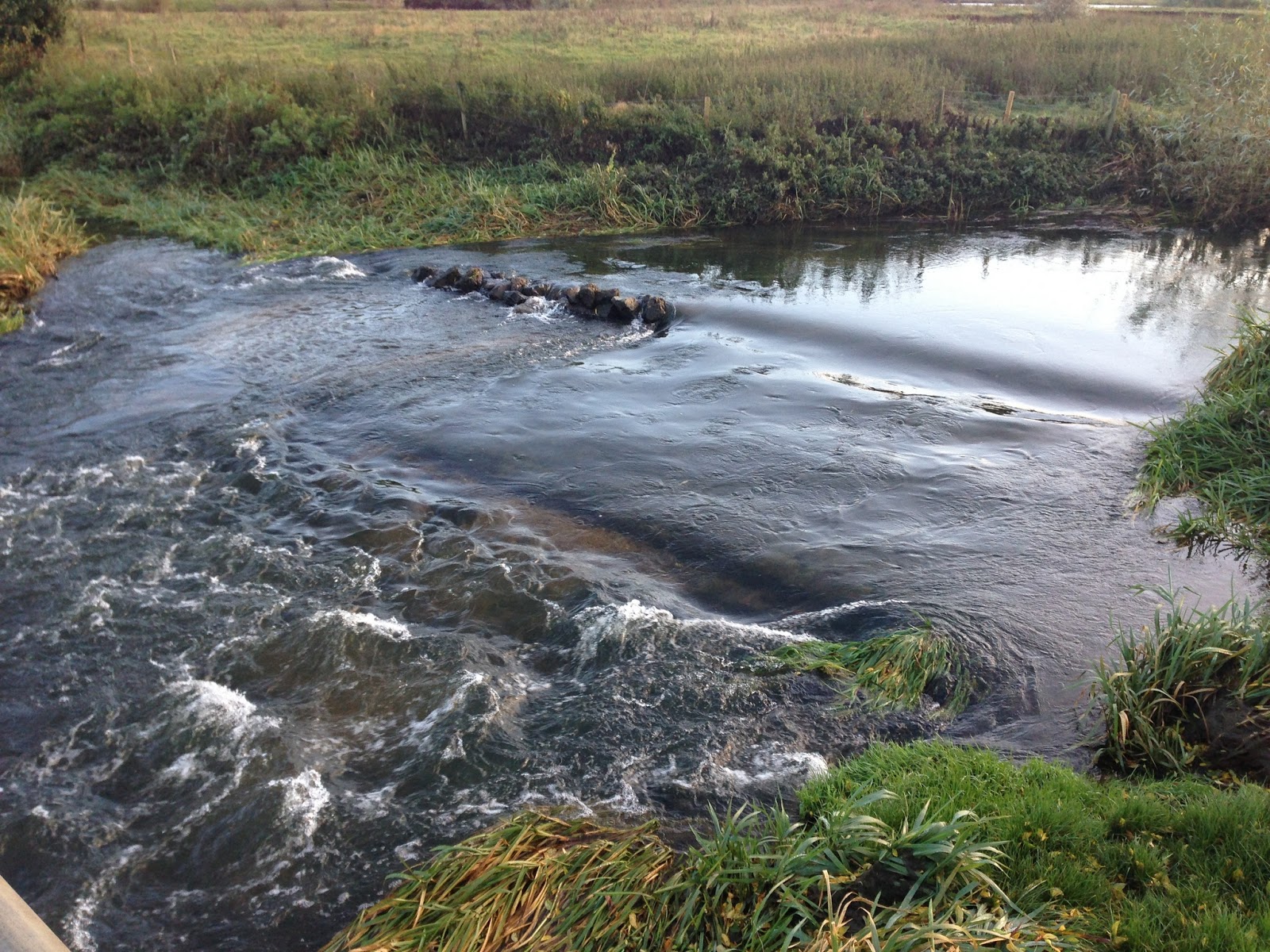 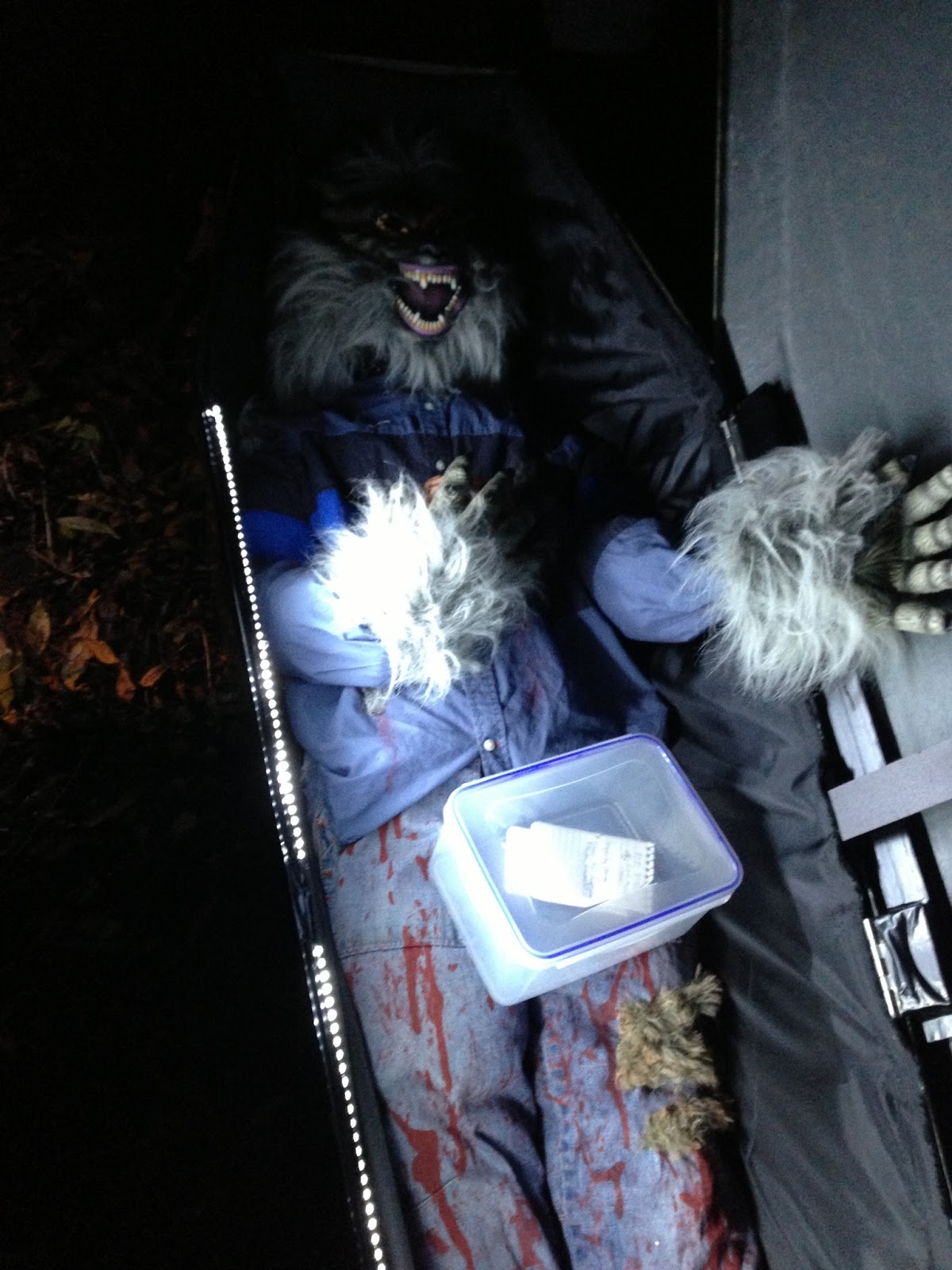 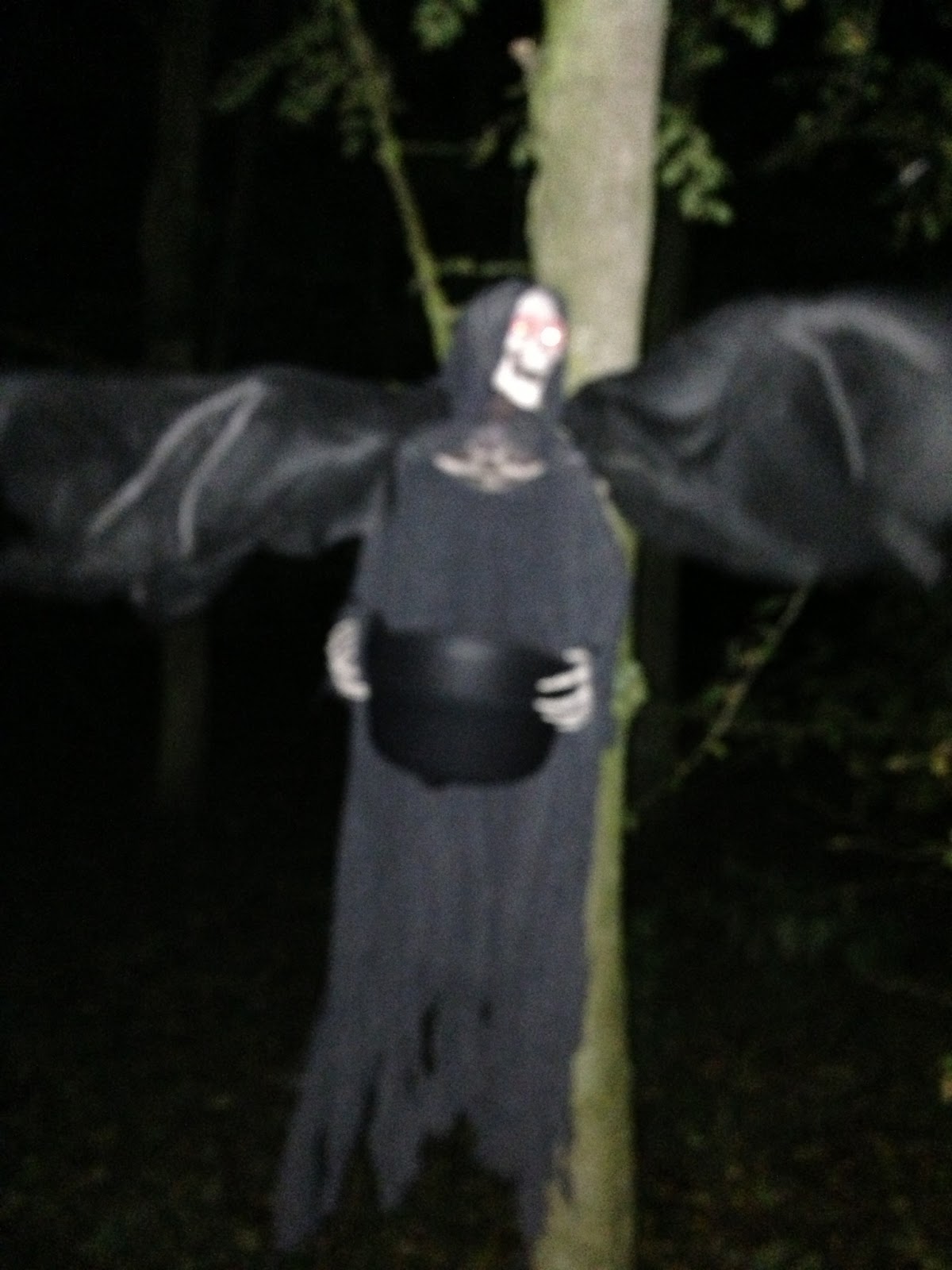