Sorry about that, but I just had to do it! It might equally well have been called “Knicketty Knacketty Knokke Heist”, but anyway, that’s by-the-by. We had some serious cachin’ to get done. 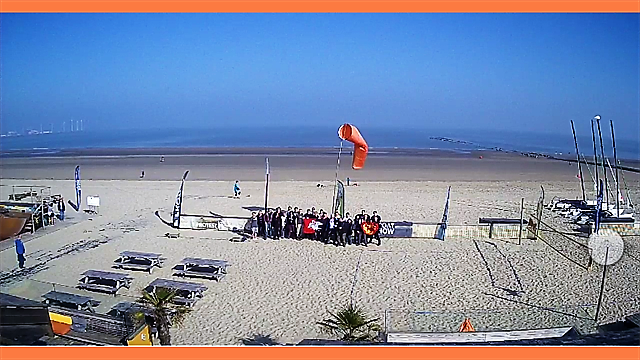 Our third day in Belgiumshire began with another hotel breakfast followed by a trip to a local bank (because the restaurant on the previous night didn’t take plastic and so cleared me out of Euros cash) and then to a Carrefour Local supermarket to grab some essentials for a day of caching, namely drinks, pastries and Pringles.

Our first target for the day was to head for an event on the beach near Zeebrugge that had been organised by a friend from the Beds, Bucks & Herts geocaching group. He’d been to the Mega too and needed to attend an event beginning with a “Z” to help complete a challenge cache he’s working on. Obviously there was some scuttling around the dunes to collect caches before the event, and an obligatory photo at the webcam cache on the beach. While we were at the event we also managed to (cough) acquire the codes for the 6 Mega Event lab caches that we hadn’t managed to get the previous day, from a bunch of Polish blokes. Result. Full house. Except now I’ve found 99 lab caches (because Brugse Beer broke with convention by not doing lots of ten). I will now have 99 lab cache finds for the foreseeable future, and my number of finds will continue to end in a 9 unless I attend an event and deliberately throw the result by only logging one of them.

From there we made our way around to Knokke-Heist, or more particularly to Heist-aan-Zee, to begin our main walk of the day. This was the “Kalf” series, running around a big wide loop to the south of the town and quite close to the Dutch border. It was quite a long walk and the weather was warm, so by the end of the 4 hours we spent doing it we’d had enough. We had done fifty-something caches by that time though, and we’d walked along a variety of terrains, most of which were pretty quick to walk over.

So by the end of the walk it was most definitely ice-cream o’clock. I stuck another couple of Euros into a parking meter and we retired to a nearby bar, where I had a giant coke and Ami had a vanilla milkshake, and we shared a rather fantastic strawberry coupe, containing strawberry and vanilla ice creams, squirty cream, strawberry sauce and a handful of fresh strawberries. You get the picture. Strawberry flavour. Lots of it.

We sort of toyed with the idea of doing a few drive-bys in Knokke-Heist but eventually, we decided that we’d found a decent enough quantity already, so we were off home for an early finish. Before going back though, we popped over the border into the Netherlands at Sint Anna Ter Muiden to do a single cache that celebrates the most westerly point of the European part of the Netherlands. Obviously there are some other bits of the Kingdom of the Netherlands in the Caribbean, but Sint Anna Ter Muiden is the most westerly bit in Europe. The geocache we did there was based specifically around the mistaken view of many Dutch that the most westerley point is up on the coast near Heist-aan-Zee, but it isn’t. It’s here.

There are a couple of boundary marker posts at the roadside here. One yielded the necessary information for the geocache, and another (the most westerley itself) nestles conveniently in the formal garden at the front of a restaurant/bar, which is entirely in Belgium apart from its conservatory and its car park. As with all border points on this trip, it’s a non-entity. There’s signs by the roadside advising you that the speed limits are different, but that’s about it.

The way back proved more challenging. I tried to get Ami to navigate on Google Maps, except they’re building a new motorway around the south of Zeebrugge, and Google Maps got its knickers in a twist.

When we got back to Bruges we were quite early, so we chilled in the hotel room for an hour (tending to our suntans) before heading out in the car to try out the pizza place we’d failed to get into on Friday night. We succeeded this time, but only because we agreed to sit outside.

The caches we completed on the day were :