Nothing much happened all morning to be honest, apart from a fairly busy hour where we met the site manager (and he showed us how to make the washing machine work), the villa was cleaned, and we met up with our rep from Thomas Cook and bought some tickets for Zoomarine.

I also took a walk up the road to find the nearest cache to the villa. It was disabled but after a few minutes and a bit of poking around with a stick I found it and it was in perfect condition.

Just after lunch we set of for Albufeira with a few things on the plan. First up we went to the Marina to book ourselves a boat trip and some paragliding for subsequent days. That all went swimmingly well.

After this we drove up to the Miradouro Casa do Cerro to do the geocache there. It was quite a strange place. A nice overlook but rather shabby, full of bins, and with a couple of people that we had to pick our way around. We did, however, manage to find the cache and move on fairly quickly. There was also a fairly challenging sequence of steep roads and dodgy roundabouts to get up there. Portugal is really hilly, isn’t it !

From here we headed up to one of Albufeira’s very ornate roundabouts on the main road that runs around the back of the old town. There were supposedly two caches nearby, but one was disabled due to some reworking of a bus stop and we didn’t find the other, which was annoying because it’s a puzzle that I’d spent ages solving. Ho hum ! The moment is lost now.

From here we decided it was time to go and find parking in the middle of town ready for the rest of the evening. Well, being honest, we had done some checking on car parks after a bad experience driving in circles round some dodgy streets a couple of days previously. We found the car park we used via the cunning technique of spotting things on Google Satellite View and then zooming in for a bit of Street View. In this instance it proved a lot more useful than the random Google Search route, which yielded a bunch of half-arsed comments on Trip Advisor (other travel review sites are more or less the same) and some location pins in totally the wrong place. Funny, that !

After parking up we totally failed to find a nearby cache and so descended the outdoor escalators onto the Fishermen’s Beach for an ice cream. Well, the ice cream wasn’t on the beach, it was at the back of the pedestrianized bit, away from the sand. The ice cream was good. Very good.

We had a bit of a walk from here up into the old town and totally failed to find another couple of caches, making 4 DNFs in a row, and making me wonder why I bother doing it for a pastime. Sometimes it can be very irritating.

It was rather warm and the kids hadn’t been soaked through for all of 3 hours so we went back down to the bottom of the hill and Kas took the girls for a bit of sea and sand action while I wandered off for a bit more caching. It was already about 5:30 pm by this time, as the day was running quite late. We agreed to meet up no later than 7:30 so we could have some dinner before attending a caching event on the beach.

Back at the plot, the caching continued in its rather average state. The first target was a trad I had to replace. The second was on a beautiful outlook point but I couldn’t find it, and the third was overlooking the marina. Thankfully I actually found the third one. I ran out of time here so legged it quickly all the way back to Fishermen’s Beach and back up the escalators to have another pop at the one on the cliff there. This time I found it, mainly because the one I replaced had exactly the same situation (in the top of a post). Marvellous. 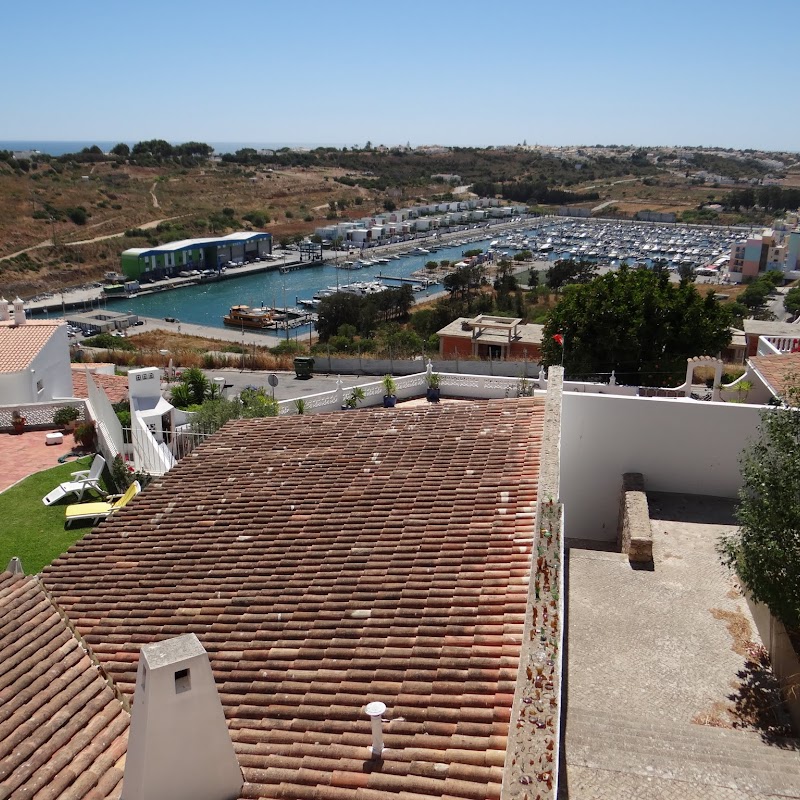 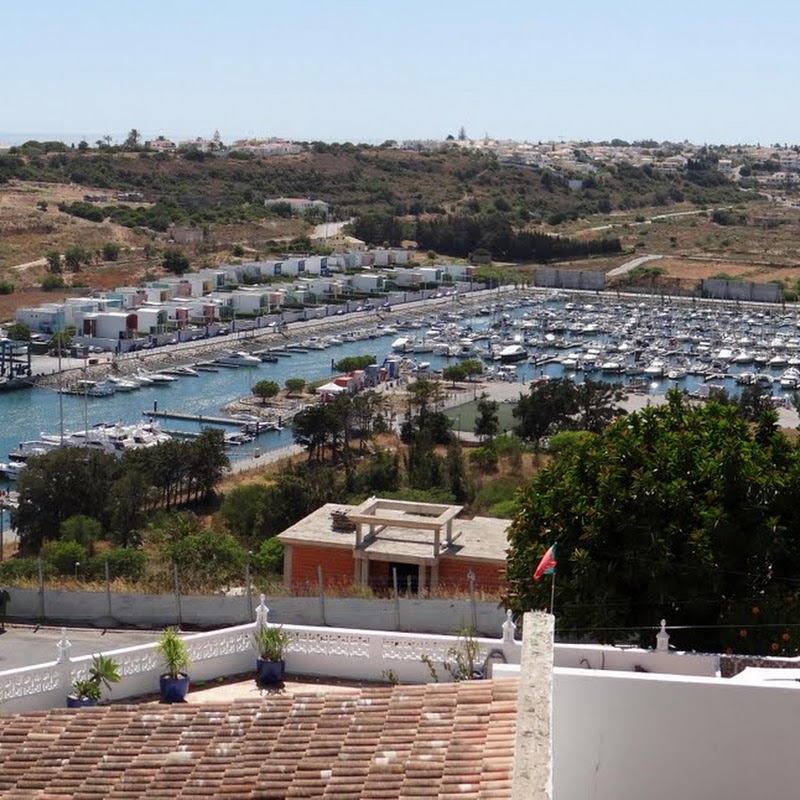 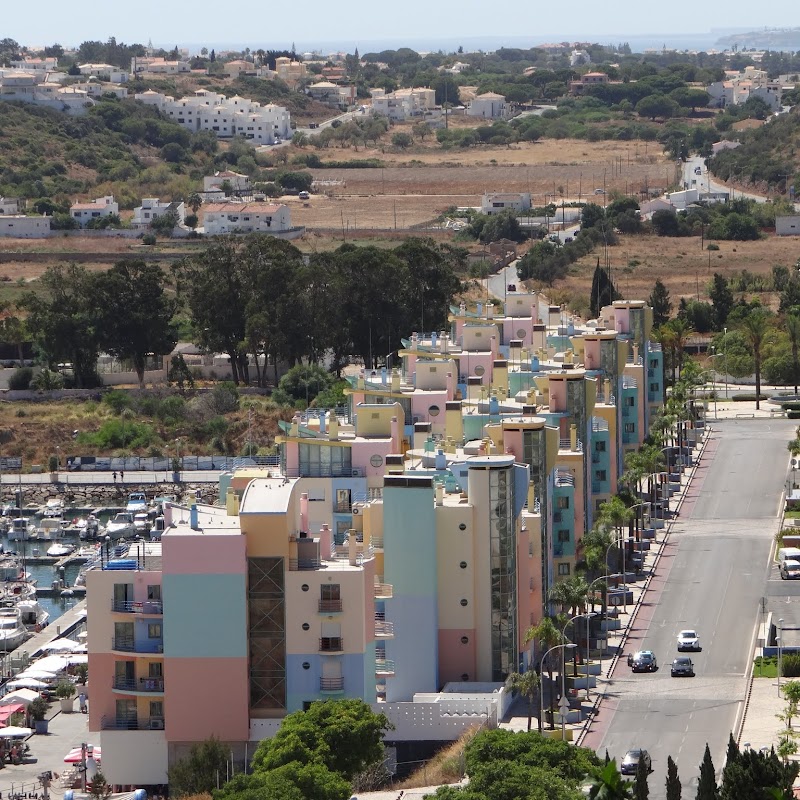 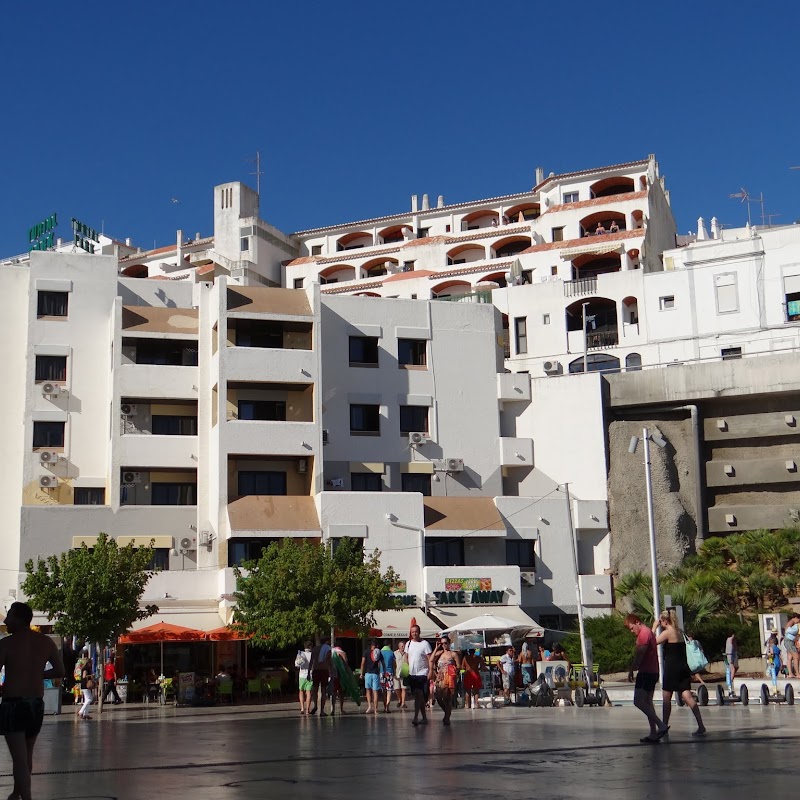 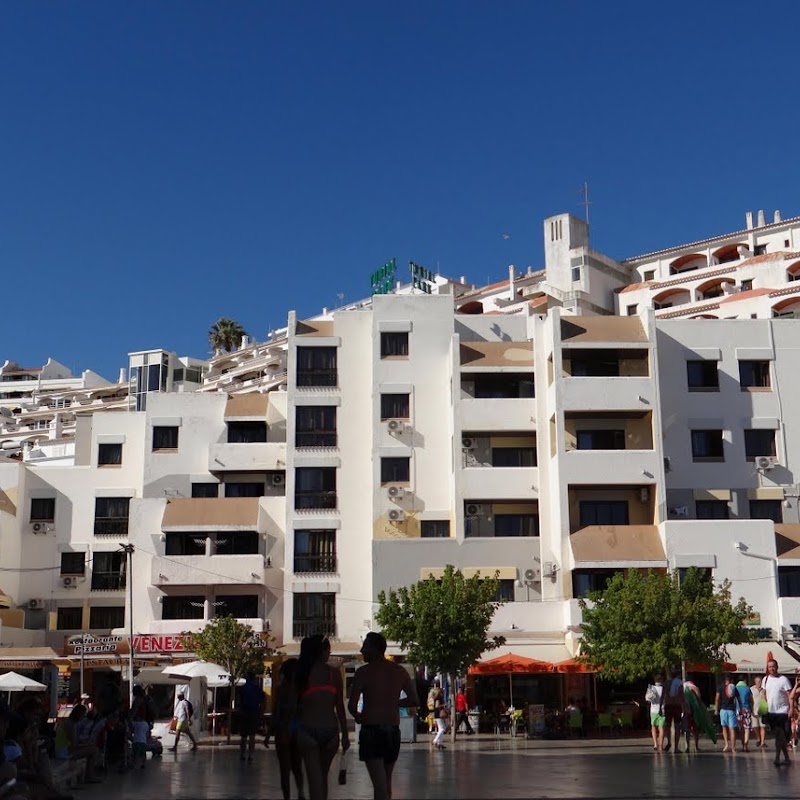 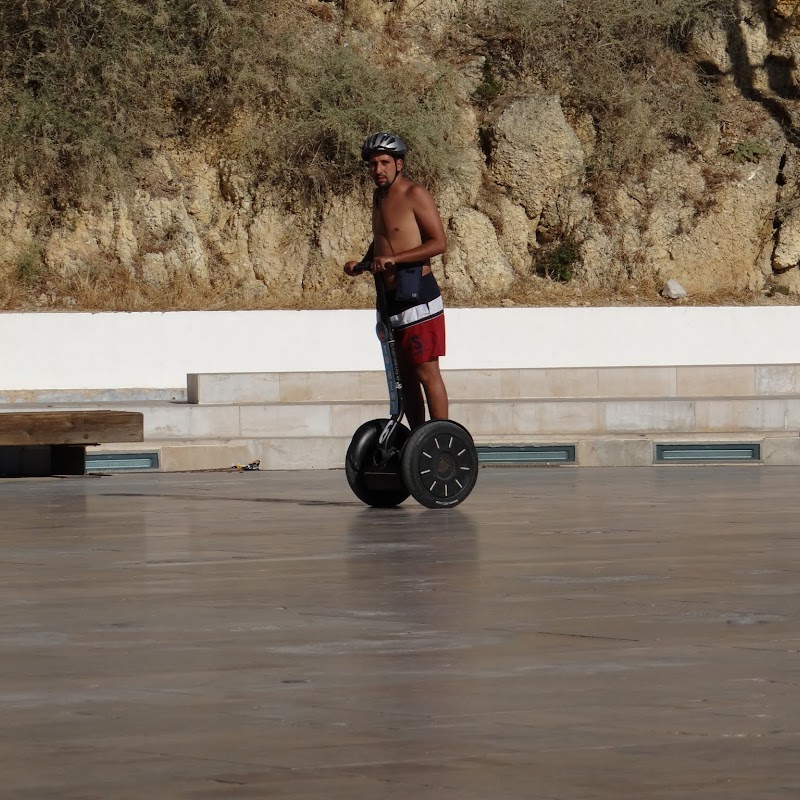 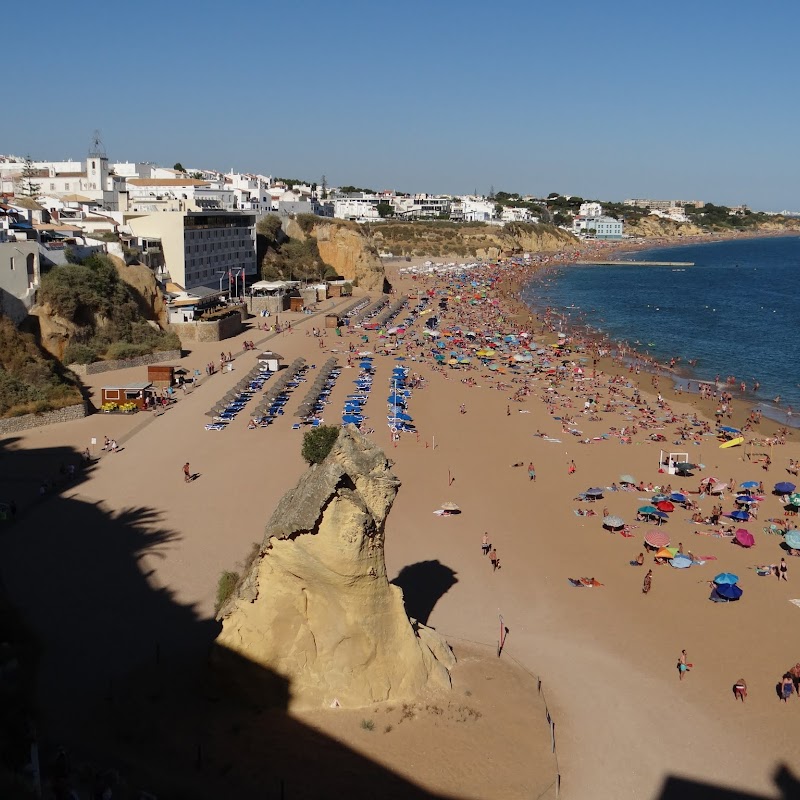 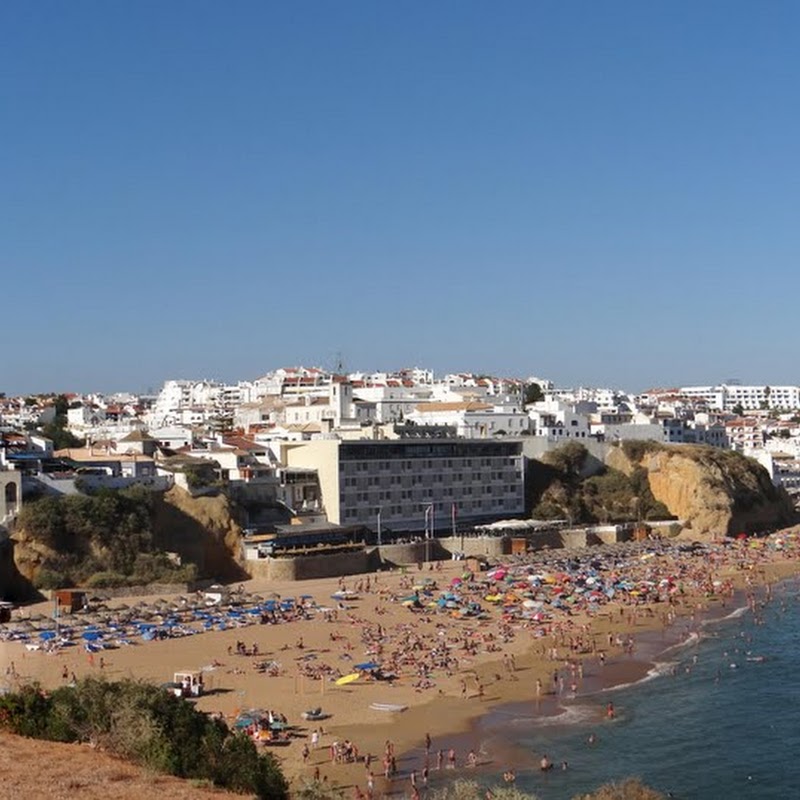 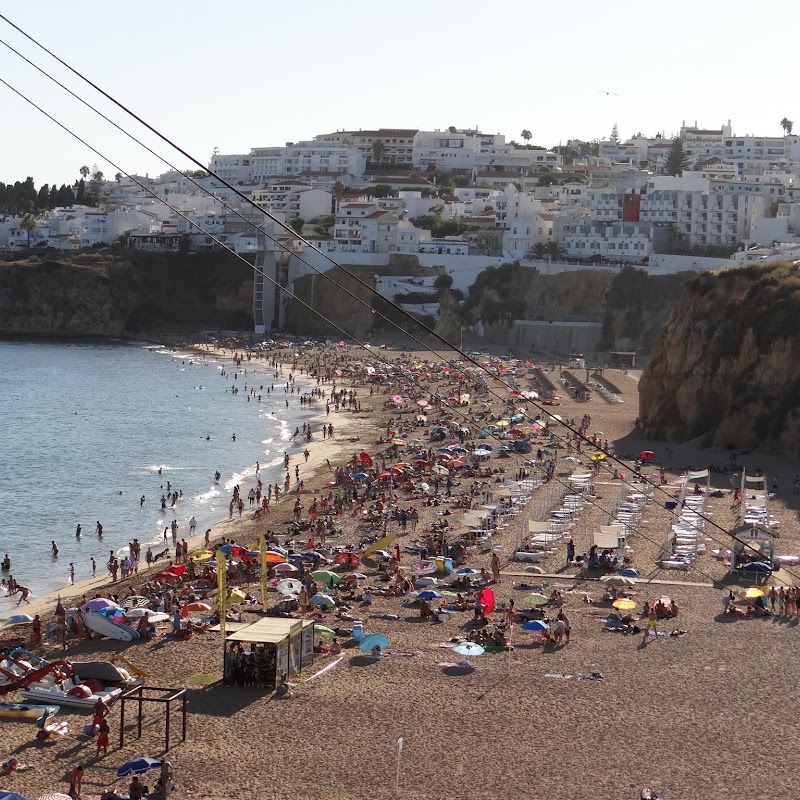 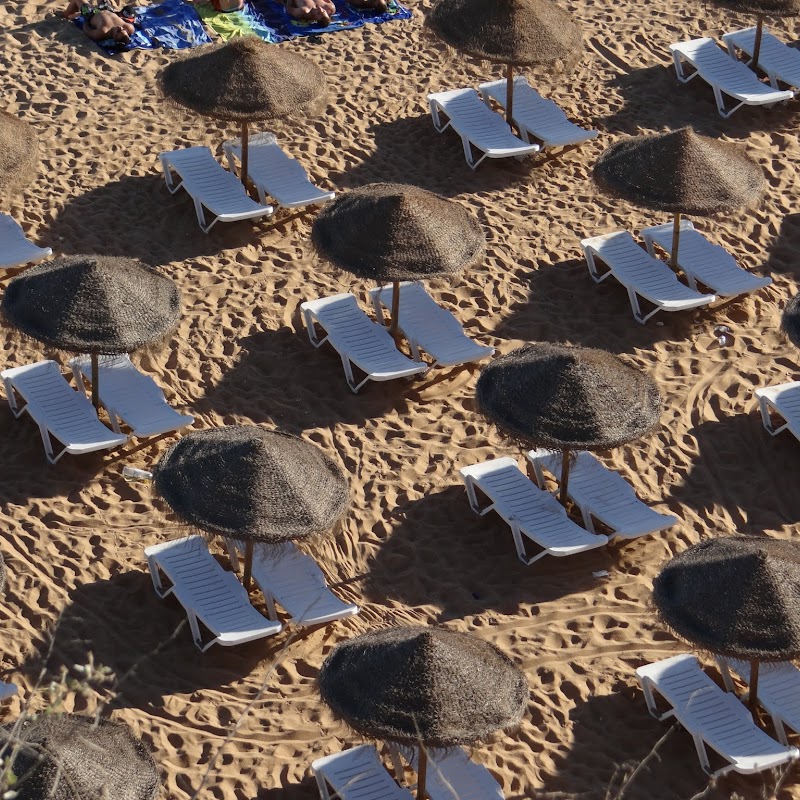 The restaurant was only a couple of hundred metres from the Fisherman’s Beach, so we took a leisurely stroll over there to attend the geocaching event, which started at 9:30pm. It was a bit quiet at the start, with us sitting there feeling a bit “Billy No Mates” and playing a game of “spot the cacher”, but eventually a likely looking family (adults with matching t-shirts) arrived, closely followed by the organizer, who spotted me straight away. It remained quiet for half an hour or so, but then suddenly at about 10 there were loads of people. They were mainly Portuguese (which actually surprised me), with a few other random Europeans and a couple of Americans. Sadly we made all of them speak to us in English all night.

The event was held right next to some statues of fishermen, which was soft of the point, because as the event was closing the host invited us all to go stand in and around the statues to get out photos taken. 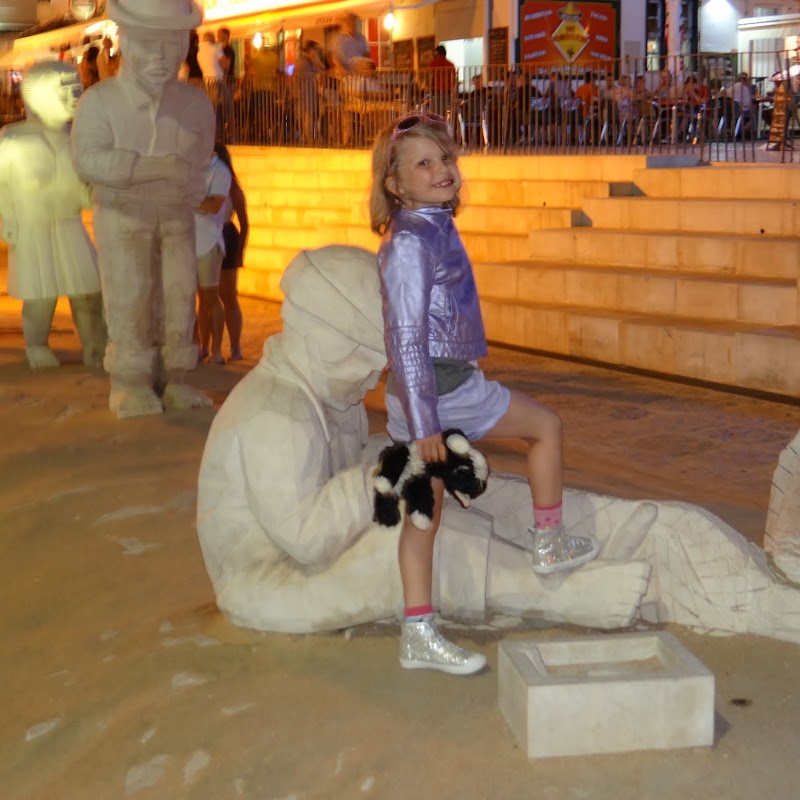 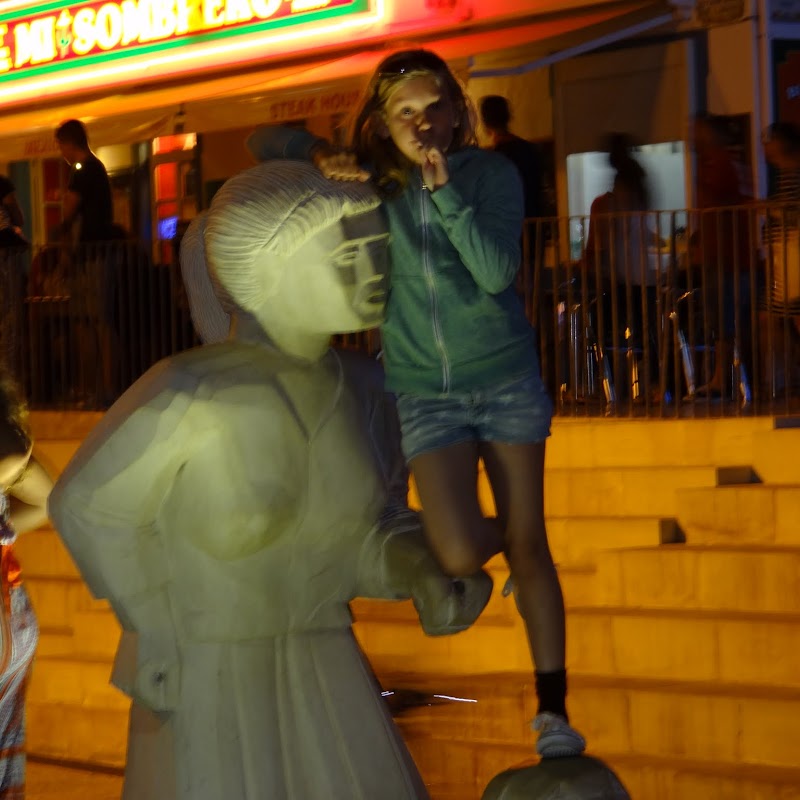 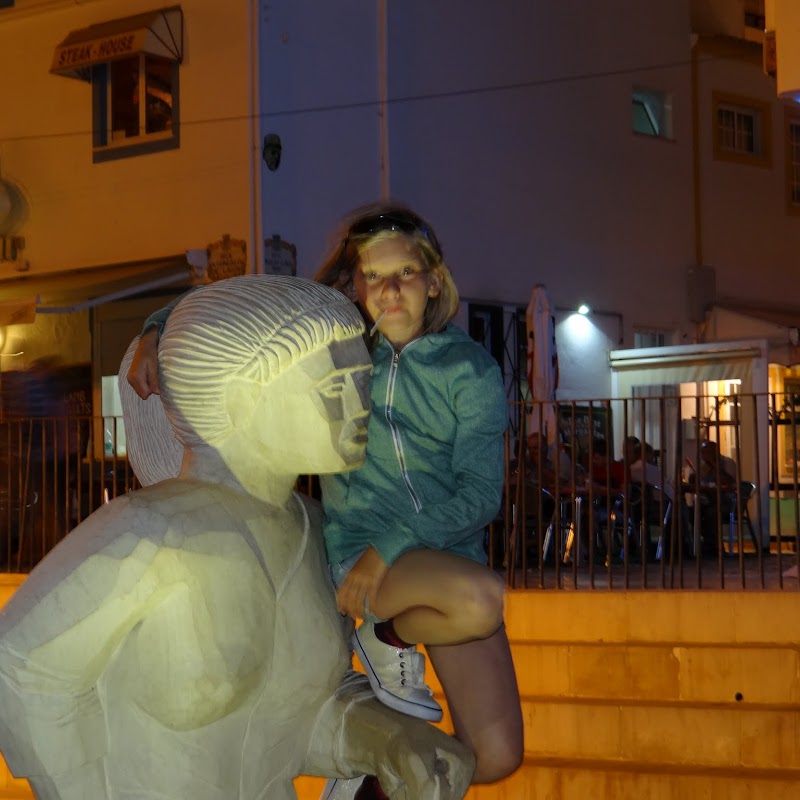 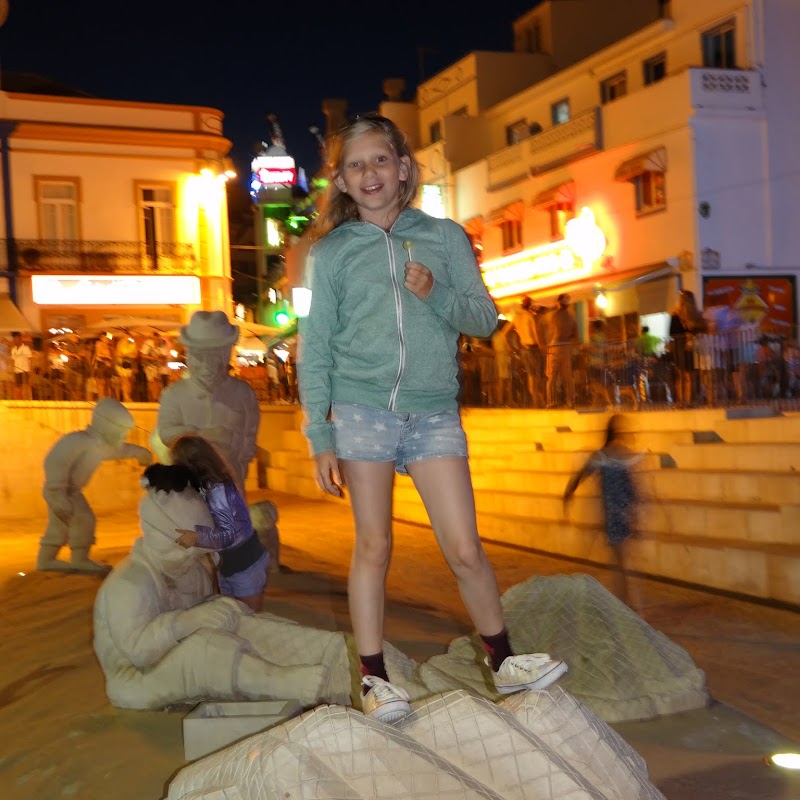 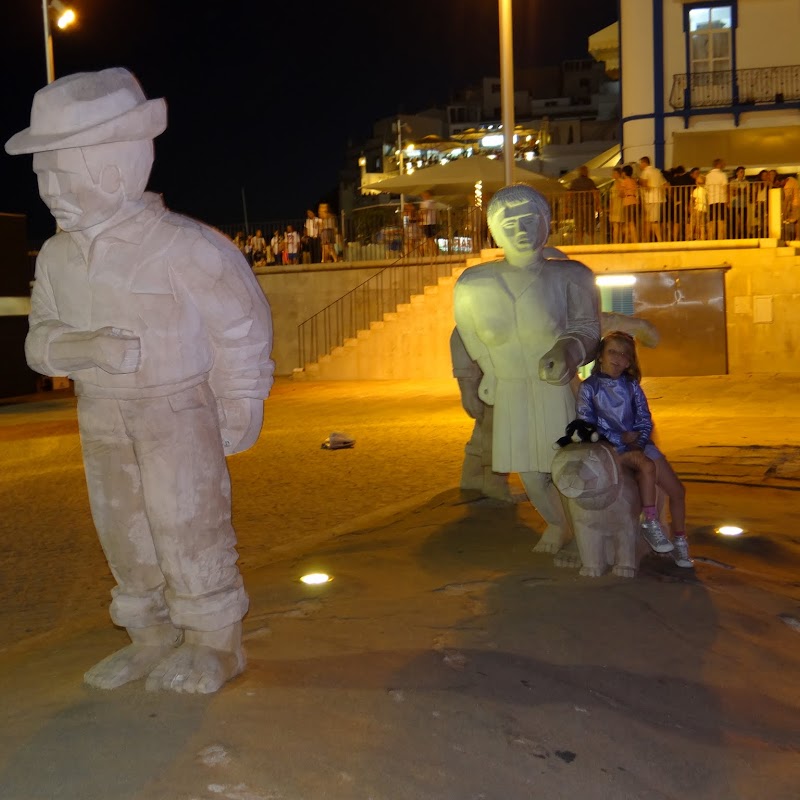 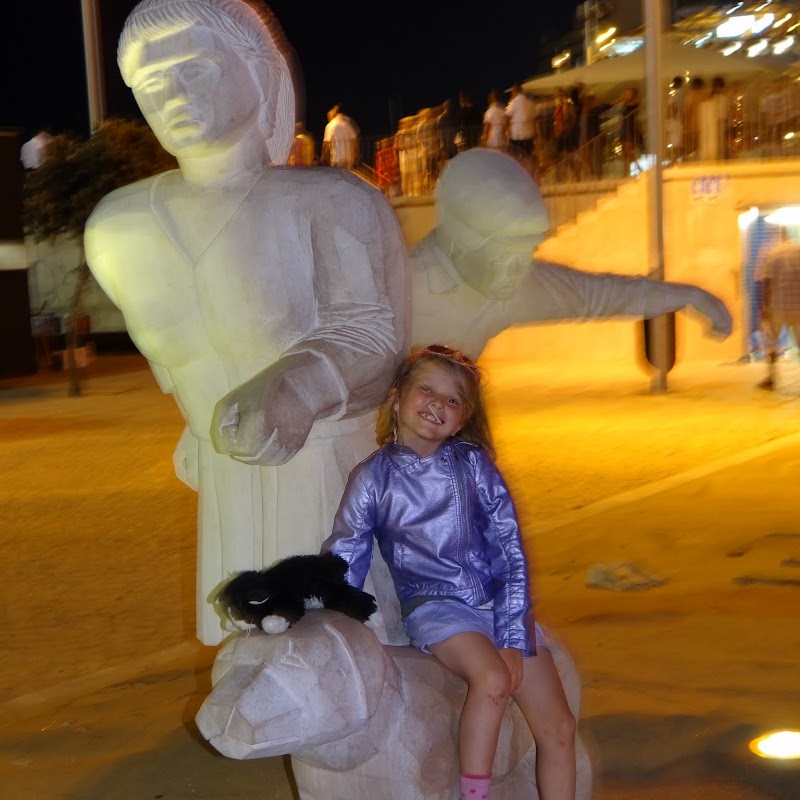 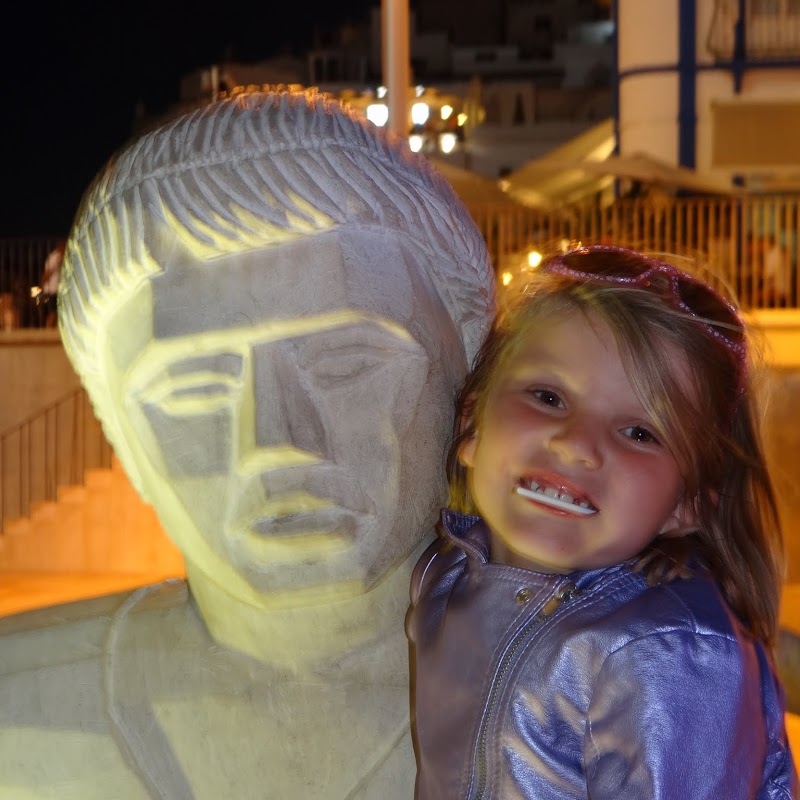 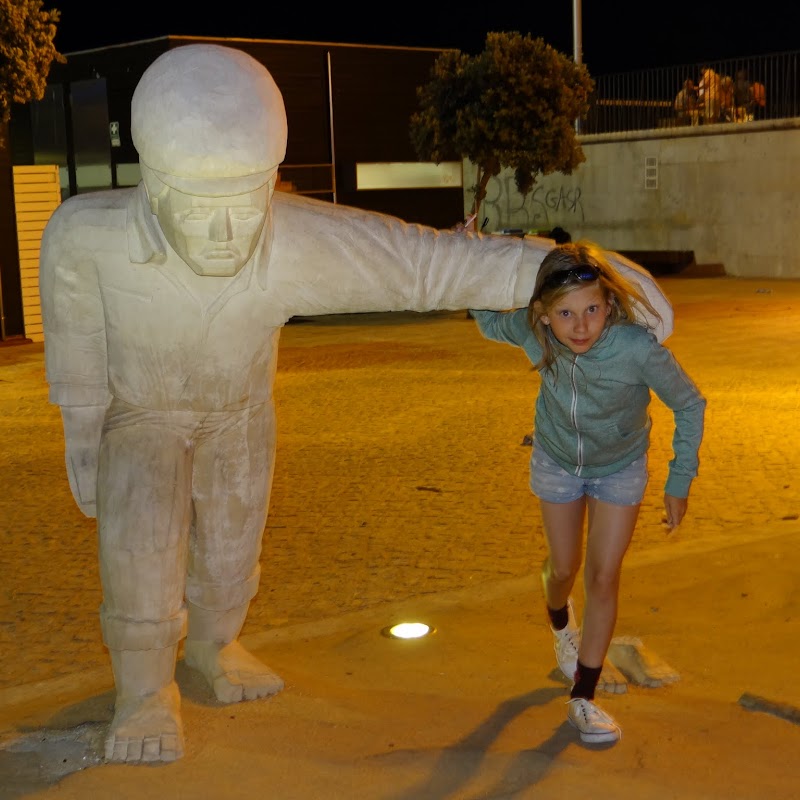 This was the first evening on the holiday when we hadn’t been around to JK’s bar, which felt a bit strange, but it was quite late when we got back. It was nearly 11pm when we got back to the car, so it was getting on midnight when we got home. The day went fairly well though, as days go.