In the grand scheme of cheesy, touristy things to do on holiday we had yet to achieve the heady heights last year’s trip to Italy. On that trip we ate bolognese in Bologna, we climbed the Leaning Tower of Pisa, we toured central Turin paying homage to The Italian Job, we got fleeced in Venice, we got hot and sweaty in Florence and we went to Lake Como to find the villa used in the shooting of Attack of the Clones. That’s some cheesy stuff…..

The best we’d managed this year was Kas’s epic run over the Col du Tourmalet a week previously, so we needed to address that situation quite urgently.

The best-looking option from where we were staying looked like a trip down to Avignon so we could go sing the song and dance on the bridge.

We started the day, as ever, with Kas going for a run while the rest of us had breakfast. From there, we drove entirely cross-country to get down to Avignon, taking the car’s recommended route south-east through Bagnols-sur-Cèze. It was pleasant if a little slow. It took us an hour or so to get to Avignon and when we parked up it was more or less midday.

Elizabeth the Satnav had taken us to a very large car park by the side of the river. There were plenty of spaces and we seemed to be only a few hundred metres from the first target of the day, which was the old medieval bridge that’s the subject of the song and dance.

The Pont Saint Bénézet was originally planned to be a massive walkway crossing the entire Rhône, which has a couple of major branches here at Avignon. It’s really a very big river and it occupies a very large valley. One can imagine that back in the day, when river management wasn’t so great, that the entire valley floor would flood fairly regularly, thereby necessitating a bridge which spanned the whole valley. There are similar items throughout Europe, including one famous (locally where I grew up) at Swarkestone on the River Trent. The bridge at Avignon is somewhat bigger. Correction, it was somewhat bigger. It isn’t now. As a strategic crossing point on the Rhône one of its primary purposes was obviously to allow the good denizens of the town to extract a few pennies each for use of the bridge. The history seems to say, however, that as a business enterprise it was a bit of a failure. This was mainly because every time there was a flood, one or more of the bridge piers got washed away, meaning the thing was probably never completed all the way across, and was in a constant state of rebuilding.

Just to completely destroy the romantic image, the song and dance were originally performed beneath the bridge (“sous le pont”) rather than on top of it.

What remains of the bridge now is four arches on the town-side of the river, which is all very convenient because it means you can walk onto the old bridge without having to take a massive hike around to cross the river at any point. There’s a charge to get on the bridge, but it was a relatively modest one by French standards and it was possible to get a multi-buy discount that included the Palace of the Popes too. That was us all booked up for the day, then.

From the car park we walked along the side of the river, stopping for a geocache or two (new department – Vaucluse) and found our way to the bridge. We wandered around a bit before finding the way in to the bridge – it involved going through the city walls and around the houses a bit. The approach from the city was quite easy, but from the riverside it took a couple of seconds of thought. The bridge itself was heavily populated but not the worst place we’d been. It was at least possible to find breaks in the people-traffic to take a few photos. You can see from the photos that we were also having a cloudy day. Still warm and humid, but cloudy. 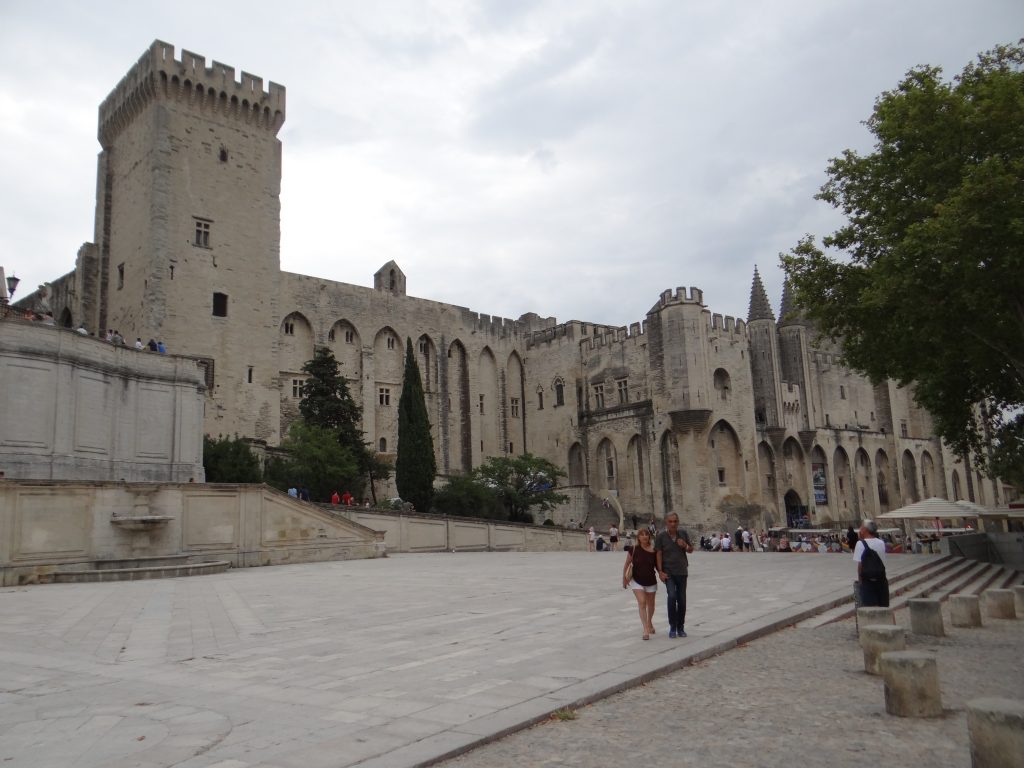 After the bridge, we took the short walk through the town centre to the Palace of the Popes, where I wasted an uncomfortable amount of time searching for a geocache in a particularly dirty area before giving up and moving on to use the entrance tickets we’d bought at the bridge. The palace was not quite what we were looking for in terms of entertainment. It’s a very grand building but inside it is basically airless. There’s not a huge amount of enclosed courtyard space that you can get to – the “paid for” zone consists mainly of two walking tours around different floors of the building. The first was quite short but we were getting a bit drained by the heat and lack of ventilation, so decided to see if we could just walk out. You can’t. You have to walk around the whole of the second circuit to get to the exit. We proceeded to do that as fast as our legs would carry us, no doubt drawing disapproving looks from the museum-loving other visitors as we went. Bum to that ! We were hot and bothered, and the Palace, impressive though it was, wasn’t helping with the hot-and-botheredness. The girls couldn’t even raise the energy for a half-hearted look around the gift shop.

Once back out in the open air it was evidently ice cream o’clock, and we stumbled across a very fine vendor of ice creams in a square just down from the Palace. These kept us company as we walked fairly slowly through the town and back to the car. The car was where I’d left it, which is always a bonus.

The drive back home along the same route was pretty uneventful and we got back to the apartment in the late afternoon. The girls fancied a quick dip in the pool, so we let them do that while I figured out the leaving procedure and Kas went over the road to check that the nice-looking restaurant was open in the evening. It was, and she booked us a table.

The restaurant proved to be one of the best of the holiday, and it was very pleasant to sit outside in a garden restaurant surrounded by trees whilst not being bitten to death by insects. We took our time and enjoyed the evening. We were in no rush to get back because the check-out time was quite late, so no particular need to rush home and pack bags. That could all wait until the morning.