After yesterday’s less than complete walk, I suggested today that we have a go at somewhere which, on the face of it, seemed relatively relaxed and not strenuous. I thought we might have a go at the Cirque de Gavarnie, on the basis that it’s one of the most perfect and spectacular examples of this particular geomorphological feature in Europe. The fact that it was 20 minutes away had some effect too, obviously. 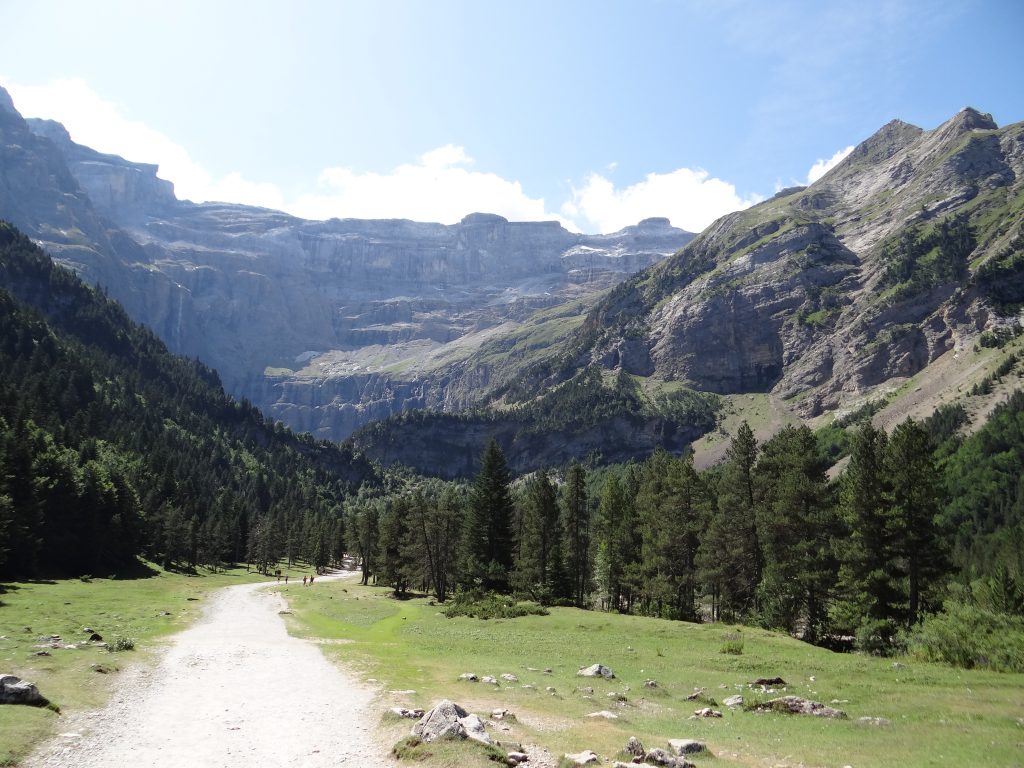 We got up and had a leisurely breakfast while Kas was out running. Eventually we left the house still fairly early, around 10am.

The cirque is up at the top end of one of the valleys that run into Luz Saint Sauveur, and the road up there proved to be pretty well surfaced and fairly wide. It was also covered in cyclists, but that was true of everywhere we went in the Pyrenees, so we were kind of used to it.

The village of Gavarnie is a small settlement that is big on the whole “outdoor activity” theme and is also fairly well catered for as far as car parking is concerned. In fact, the car parks are massive, and I can only surmise that this is because the walk to the cirque is one of the famous “must do” things in the area, much like walking up Helvellyn would be in the English Lake District. They may be massive, but mid-morning on a sunny day in summer, they are still full. Getting full, anyway. On the way up the valley I’d got myself into the middle of what turned out to be a group of four cars that were with each other (I didn’t realise it at the time). Anyway, everyone was going to the same place and I ended up parking second spot in a run of five cars. The occupants in the four-car big group seemed oblivious to the fact that we weren’t in their group, to the extent that one of their teenage members started peering into the back of my car and seemed just about to pick out one of the sets of walking boots. Seriously dude? I think we made the point eventually without too much argy-bargy.

When I started up my GPS (of course, because there were geocaches on the way) it said that the head of the walk, or the foot of the cirque, was about 3.6km away. The first of those km was though the village, so we strolled through in the rather warm conditions and Ami and I filled the bags up with cold drinks and biscuits while the other two found a toilet. 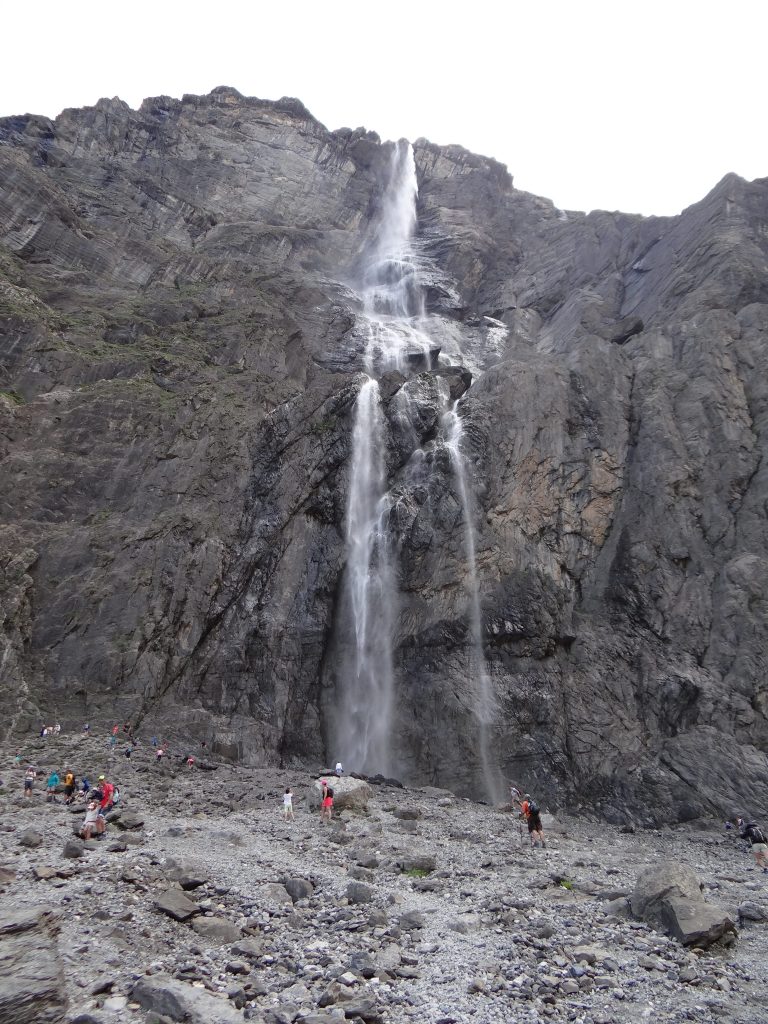 The walk to the cirque appeared to be fairly flat on the map, especially compared to the previous day, and for the first two thirds it certainly was. All the way while you’re walking out you can see the very impressive and substantial back wall of the cirque getting gradually larger. It looks big from the village. It gets amazing as you approach.

As you can see from the photo, the walk up was along a fairly wide and well-travelled path, leading eventually into a bunch of trees which completely hid the start of some relatively steep uphill. Eventually you break out onto a flattish area at the foot of the cirque where there’s a big open paved area and a cafe, which we weren’t expecting. We stopped here and the girls waited for me for a bit while ran up the side of a cliff to find a geocache, as you do.

When I came back we had a brief discussion about what we wanted to do, and the girls opted to go plodge in the stream in the bottom of the valley while I opted for one more earthcache, that involved walking right up to the foot of the waterfall on the edge of the cirque.

The walk up was supposedly a mile or so, but what I’d neglected to account for was the underfoot conditions. It started off as a reasonable mountain path, but closer to the back wall of the cirque it was basically loose and rather unstable rock. It was like walking up a sand dune only with bigger lumps. Every step involved pushing some rocks down behind me. It took me a while to reach the point required for the earthcache, a part of which involved waiting for the GPS to figure out where it was. Close proximity to a 600m high sheer rockface isn’t conducive to getting a good GPS signal. If the way up there was rough, the way back down was positively tricky. Having your feet slip away behind you whilst climbing isn’t so bad. Having your feet slide away in front of you is quite disturbing.

Once back on terra firma I met up with the ladies back at the cafe and we retired for some ice cream, water and coffee. It was reasonably priced given the location, and we sat for a while resting our achy legs.

The walk back was done with reasonable speed but also a fair amount of moaning due to aching feet.

The car was where I’d left it (which is good), and we were soon back down to the apartment and preparing for our evening. One of the pieces of preparation was washing a few clothes, which worked all fine apart from some oik deciding to take our stuff out of the machine and just dump it on the floor.

While we were getting ready there were large amounts of cyclists turning up in the apartment block. There was an event in the village on Friday evening and it seemed most of them were stopping overnight at our place. The event meant that many of the roads were closed off to cars from about 6 pm so that the cyclists could get to it.

We didn’t actually spend any time watching them, as a result of the fact that we had a reservation at the “Chez Christine” restaurant – the place we’d failed to get into on Saturday night and where I’d suffered the grumps on Wednesday too. Kas has made a reservation for Friday night and we duly arrived for our date.

Aside from the fact that they were very busy and the waitress was really overworked, it was probably the best restaurant we used in Luz. It’s Italian in style and we split a selection of pizzas and kinds of pasta between us. I think I had a risotto with chicken and mushrooms. It was well nice. For pudding the girls gorged on their usual things while I ordered a plate of cheeses. Mmmm! Cheese. And port.

We’d done much of the packing before going out, so when we got back the girls had a bit more packing to do while Kas and I did some cleaning. The apartment was one of those places where you pay a deposit against damages and they check prior to departure whether you’re good to go. They did offer us the opportunity to pay €85 to have them clean the flat on our behalf, but that seemed a little excessive. All we really had to do was to sweep the floors and brush the khazi. It was obvious that they sent cleaners in anyway before anyone else arrived, so I guess they were really looking to make sure you hadn’t done a dirty protest or smashed all the furniture. We hadn’t.