A couple of years ago I built a 25m length of new fence. It runs from the back of the garage to the corner of the garden. It took me a fair chunk of the summer to do it. Anyway, of that 25m length, 5m is behind the garage and 8m is behind the edge of the lawn. The rest is a straight run of fence that is all you can see from that part of the patio. We decided that we should break it up a bit by adding another planting bed. Indeed, we decided to make this the biggest of the planting beds, running a length of about 2.5m. It’s a very simple rectangular bed that runs along the fence line.

I was able to use the existing row of big concrete blocks that lie along the perimeter. There was nothing wrong with these and they formed a nice straight and solid edge. So I only had to dig a trench for a three-sided concrete base. I went to a similar depth to the concrete blocks, more or less. 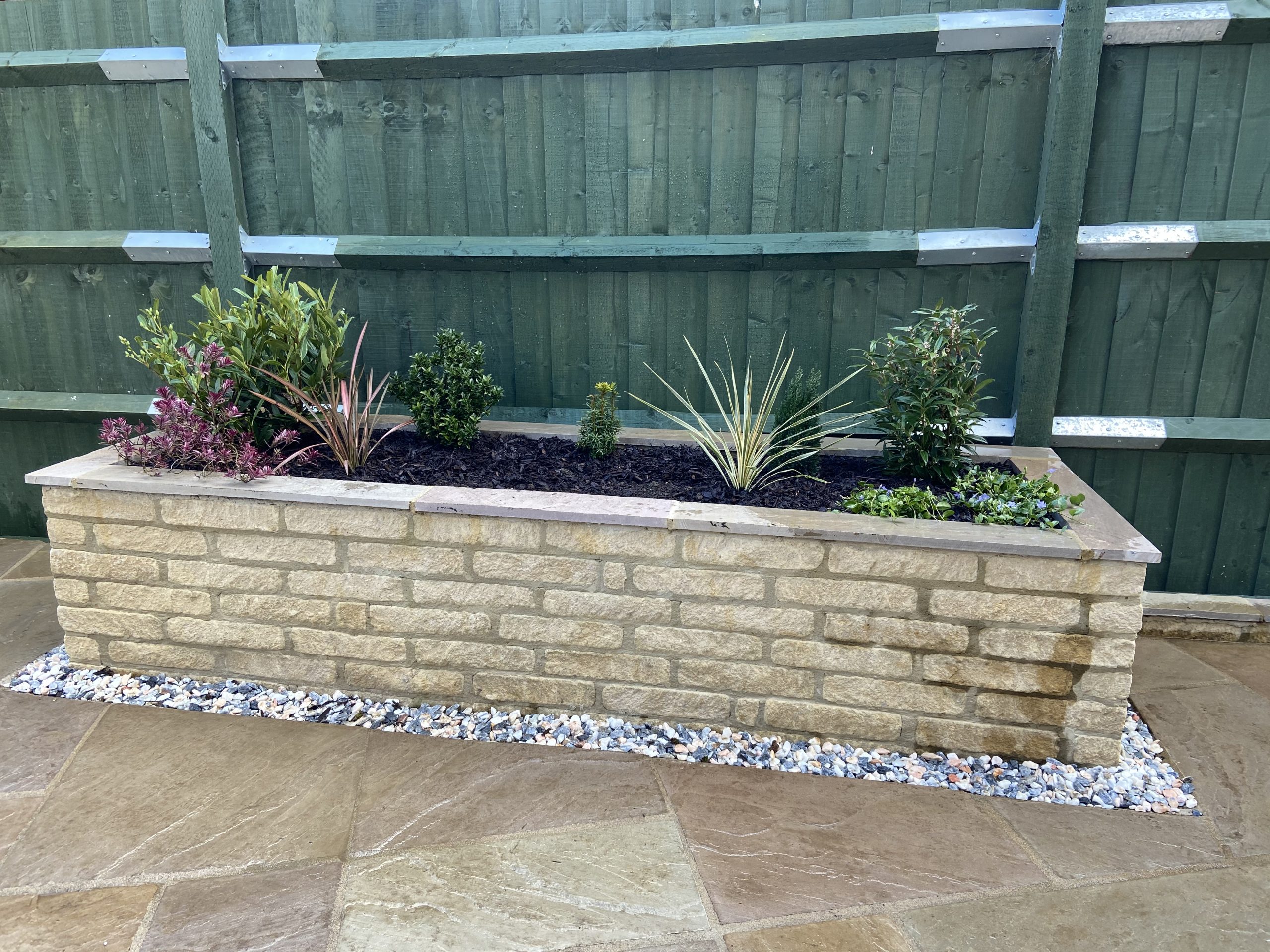 As with the other beds, I didn’t put a concrete pad across the middle of the base. That would mean finding somewhere to send excess water. What I’m actually doing is digging some of the clay out and refilling the bottoms with gravel, so they act as a bit of a sump for rainwater. We’ve never really had an issue with rainwater escaping from the soil, patio or beds before, so I made the decision that I didn’t need to do too much. I built a number of gravel soakaways to take water off the patio. I also didn’t put the slabs right up to the edge of the house. That would be better than it used to be, anyway.

I made the mistake of not planning to do this from the offset. I had to retro-fit some gaps in the mortar joints to allow the water in. The water that runs into in this bed seeps ever so slowly below ground level under next door’s path. If it comes down like stair rods then the water flows around the edge, but it used to do that anyway. The neighbour has a block-paved path along the edge, which has quite a good capacity for absorbing excess water. There’s a big gravel soakaway under there somewhere too. I therefore didn’t worry too much about drainage.

Back at the plot, this larger bed might become either the “desert” bed or the ericaceous one. Whatever goes into it, there will be a lot of it.

Fast forward to March 2021 and time to start planning the planting. Gardens centres were open despite the lockdown, so we were able to hack on with the plan. We decided that this bed was for me, so I planned a bunch of “partial shade” plants. On the first visit to a garden centre I returned with a prunus laurocerasus, a Sarcococca hookeriana and some vinca minor as well as a few unplanned other things. It now looks like a (part-planted) bed.