Side of the House

The Gardners » Garden Rework » Side of the House 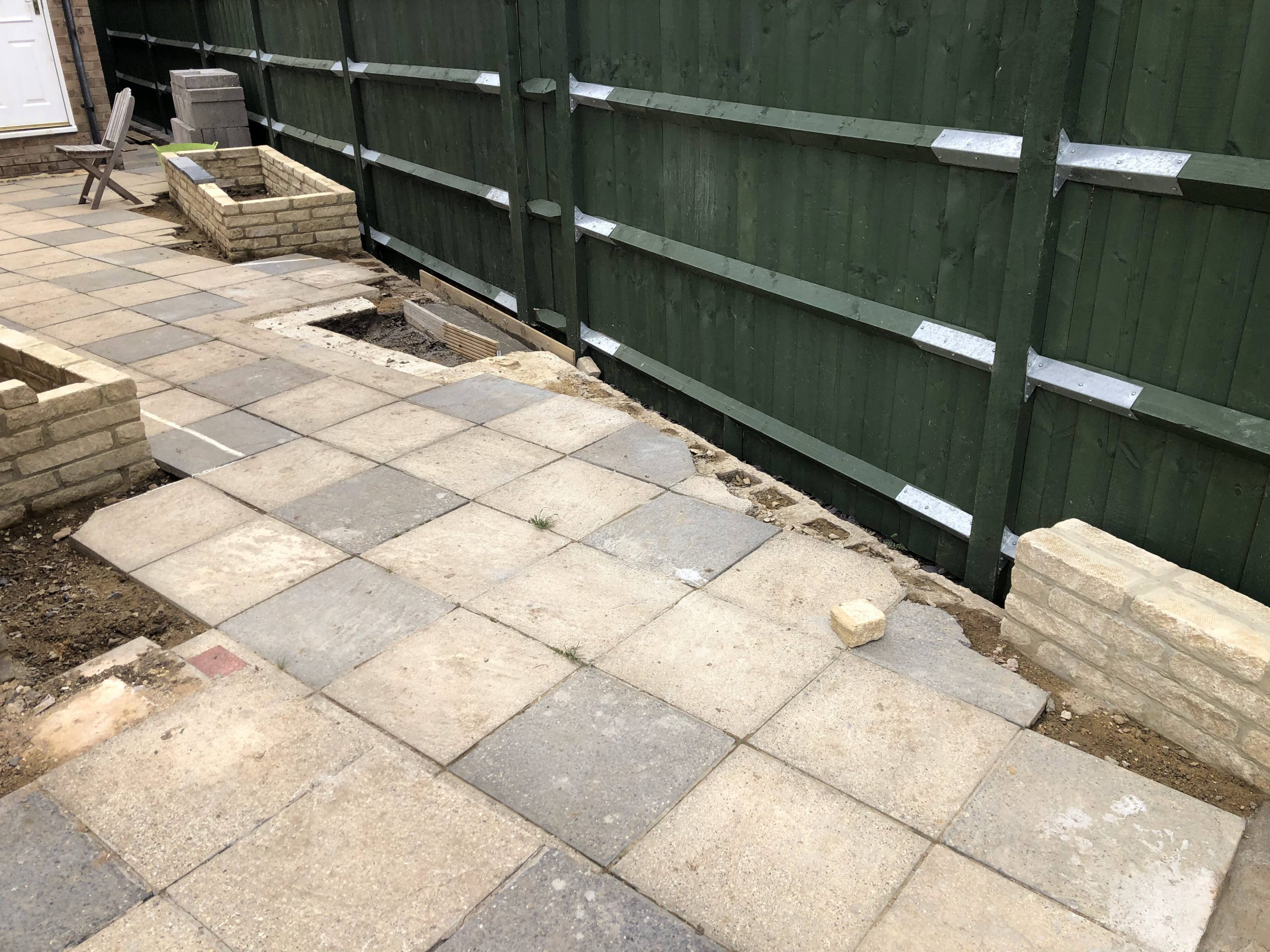 Over the course of the years we’ve lived in this house, the side of the house has been the biggest “unexploited” resources. There’s quite a big area around the side, but it presents several challenges that have made it either difficult to plan or low priority to complete. We originally planted a load of low-level beds and had some rather oversized plants in them. These gradually degraded over time as the plants became too large and the paving slabs around them discoloured and stained. We also has a pergola right at the narrowest part. This had a massive jasmine plants all over it, and the net result was quite a narrow opening from the back of the house to the side. It was plant that needed chopping back 2-3 times a year. There was also a step in between this area and the back of the house which I wanted to remove by creating a sloping patio. Finally, the area to the side of the house has very few right angles. It’s narrower at one end than at the other, and at the wide end the wall of the garage is not at right angles either to the house wall or to the fence. When we originally had the area paved the contractor did a bad job and gradually the paving sank so that the lowest point was against the house, meaning that water pooled at the edge.

The area should be one that we love to go and spend time in. It’s a big area and it faces south and is quite sheltered from winds, so it catches the sun and gets nicely warm whenever the sun shines. We’ve never really used it much because it looks a bit shabby and always makes me think that it just needs a load of work doing on it. It should be a nice relaxing area to sit in the middle of the day or, alternately, an area that is more sheltered in the evenings if we’re having a go with the firepit. 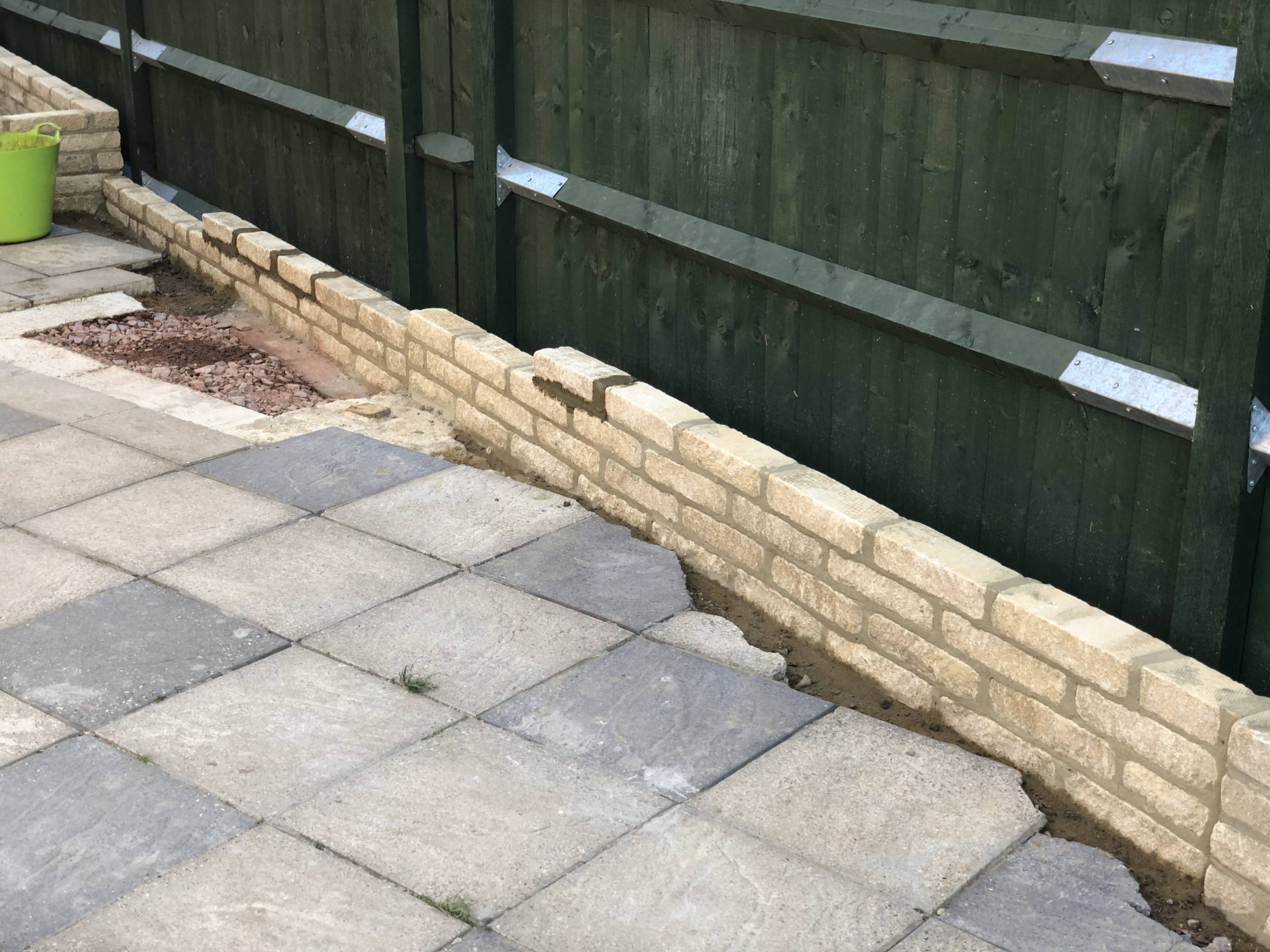 So the overall plan was to address all of those issues (apart from the lack of right angles, which we can’t really address without buying the house next-door). The first job was to remove all of the old beds and the pergola so we could, as it were, see the size of the task. Then there were plans for several new, brick-built planting beds and I decided that rather than leaving the new sloping patio with a bare (and not straight) edge of slabs I’d build a retaining wall down the edge and lay slabs up to that. When we originally did the patio here we laid a line of heavy-duty concrete blocks along the edge (to build up the land properly in comparison to next-door). We didn’t lay them quite straight because the fence line and house boundary aren’t quite straight. These blocks were still nice and sturdy, so it was easy to clean the old slabs off the top and then lay a brick wall directly onto the top of the blocks.

I didn’t really take photos of this area before starting, so the first photo on this page shows how it looked after I’d already cleared the edges and started laying bricks for the planting beds. The second photo shows what it looked like when I’d put the wall down the edge.

Of all the areas to work on, this one has caused me the most headaches. How do I pave down a slope? How do I cut around the beds because of the shape? Where do I send the excess water? What’s going to be planted in each bed? Many of the questions remain unanswered at the time of starting to write this post, but things moved on quickly as my level of confidence increased and as further effort was applied. 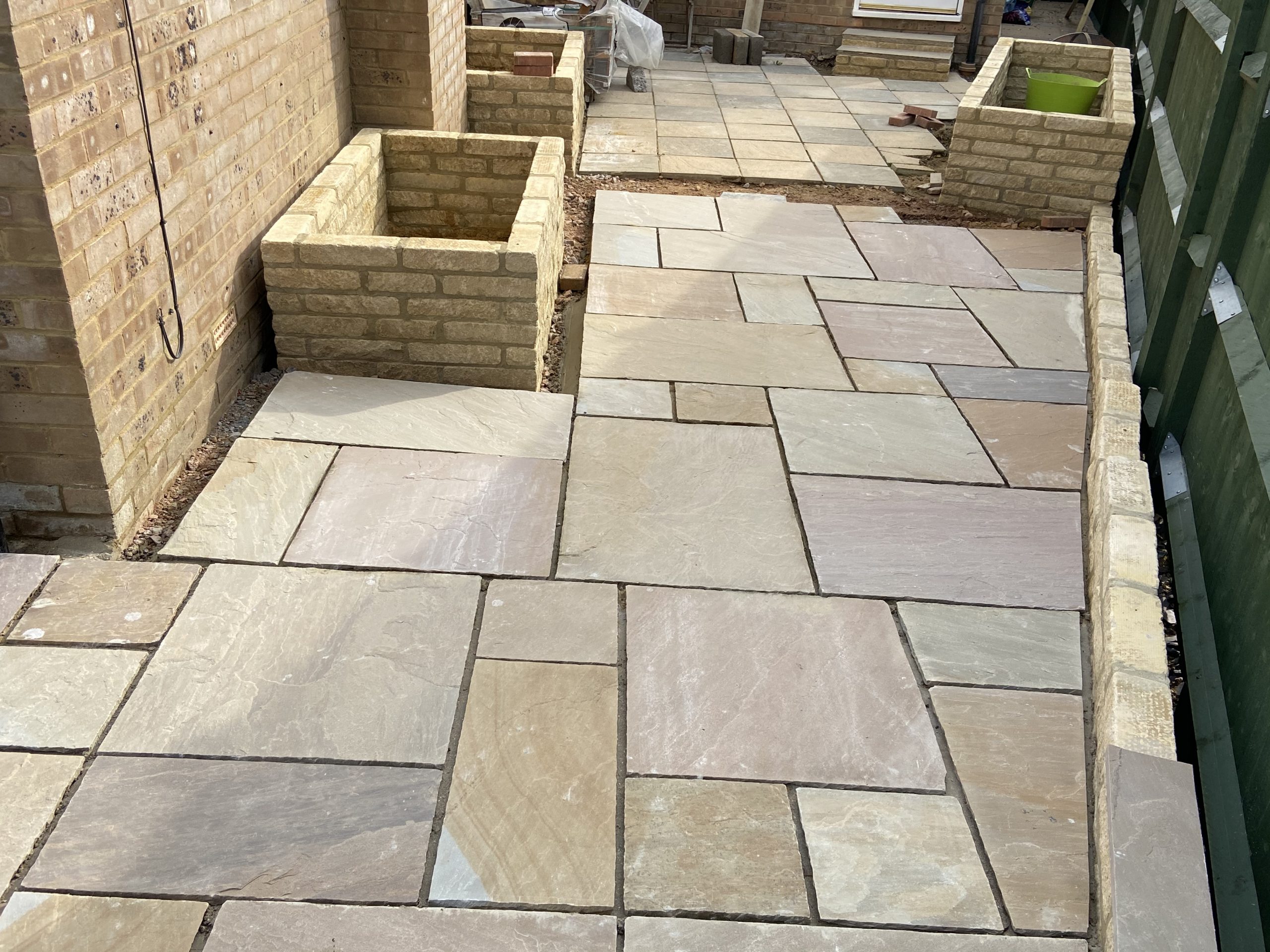 The third photo here shows how the slabs looked when I finished descending the slope. On this one the slabs aren’t finished (joints are empty and the faces aren’t cleaned or sealed) but you can see the picture. The area around the corner and down the slope represents about half of the total area around the side of the house. I was at this point by mid-October 2020.

During the final week in October, I took holiday again and set myself the objective of getting all the slabs down in this area. It proved to be a challenging target when it shouldn’t really have been. Three things got in my way. Firstly, when I removed the old slabs on my first day of effort it became apparent that the original patio guys hadn’t done a great job with the base. It was a bit damp and I was sinking straight into the wet clay – there was virtually no hardcore under much of this area. I therefore lost nearly two days digging out a load of what Geordies might refer to as clart, and then waiting for delivery of a bulk bag of hardcore to fill the hole in. On the Monday I spent the day dumping further rubbish into a skip I’d hired because I didn’t have the materials to do anything else. Secondly, on the Thursday it was precipitating quite badly. It was so wet that I really couldn’t do anything, so I went out and bought a new bike instead. To be honest, it rained on Wednesday afternoon too, but I persisted through it even though I should really have stopped. Finally, on the second Saturday I was interrupted by having to do some work. It rained much of that day too, but there would have been 3 hours in the morning and a further 2 in the afternoon if I’d been doing this instead of reviewing technical documents. 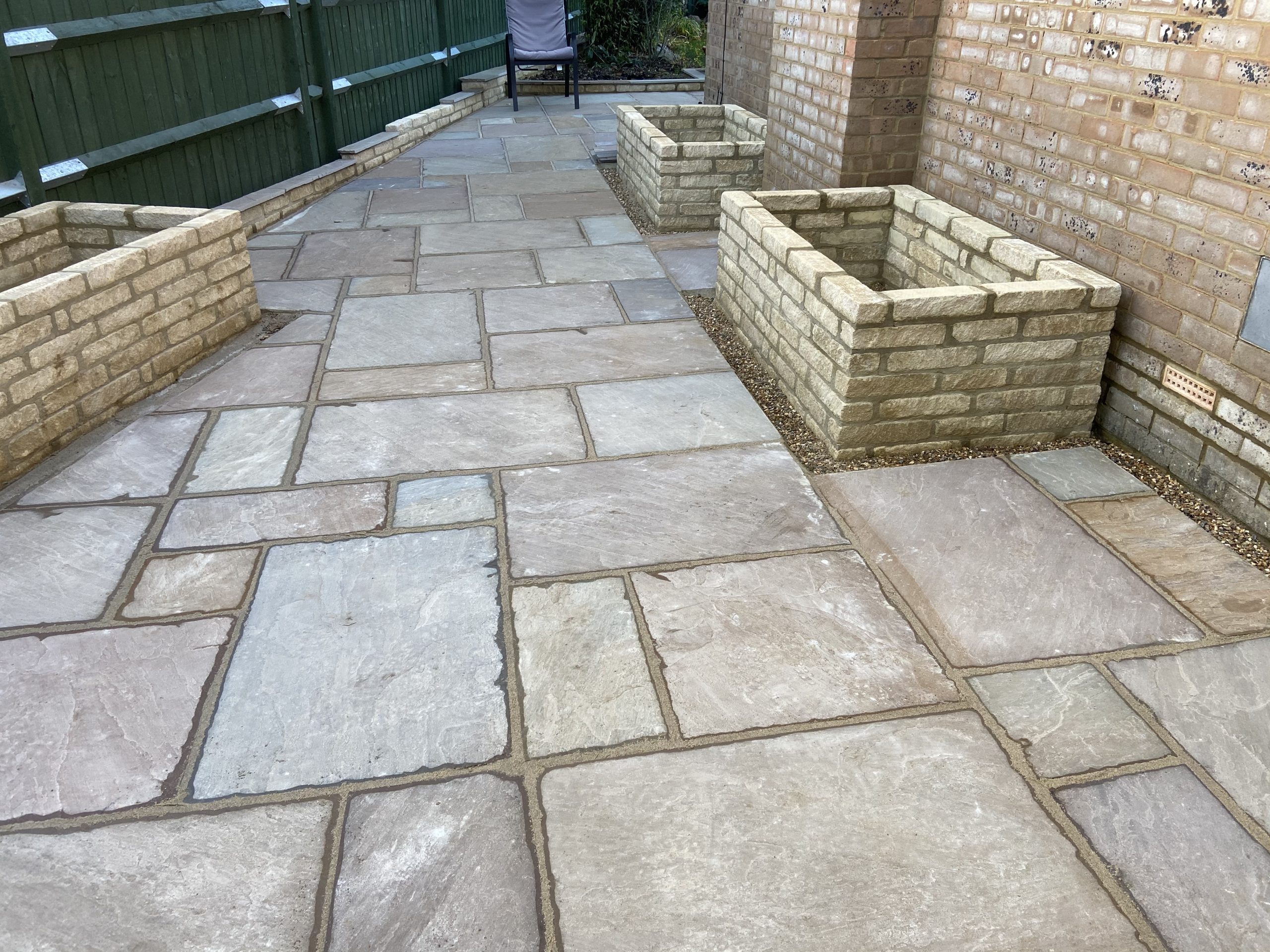 The net result is that after a further week of effort I found myself with about 3 sq,m. of slabs still to lay. All required cuts, so I expected it to take at least another full day. On the bright side though, I did manage to reach the back step of the garage and the fence, and all of the remaining parts could be reached by standing on the new slabs, so no more mucky bits. All the bases are laid, I just needed another day of cutting and mortaring down a few slabs. I guess I was being rather optimistic in assuming that a week in October wouldn’t ever be interrupted by rain.

The following weekend was dry enough to have a go at it. I didn’t quite get up early enough on the Saturday, so it was going distinctly dark when I’d finished the area around the garage. That left me with just a small area between the two planting beds (against the chimney breast) and really didn’t want to leave that for the following day, so I worked into darkness to finish it.

The weekend after that I finished all the edges on the Saturday and on Sunday I cut enough coping stones to do most of the sidewall and all of the funnily-shaped corner bed.

And the weekend after that, I filled all the joints, leaving the whole thing in the state shown in the fourth photo on this page. The joints need to be cleaned then the slabs needed to be cleaned and sealed. And I need to add coping stones onto the remaining three beds. If I finish this area before Christmas I’ll be happy.