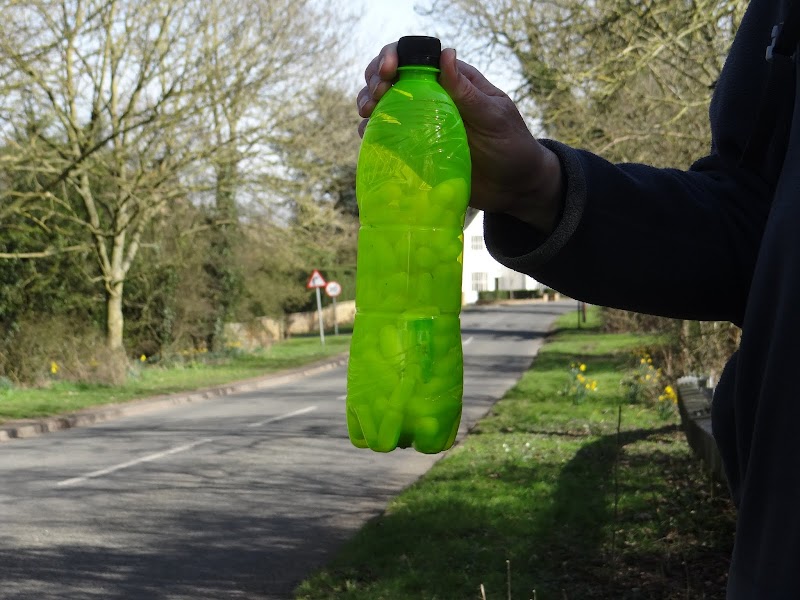 The geocacher in question is Washknight, and you can see the results of the experiment so far at http://washknight.wordpress.com/tag/washknight-interrogates/

1. When and how did you first get into geocaching?

I’d like to start by saying that it’s all the fault of my wonderful wife. No. really. I’d never heard of it. She’d been signed up for a few months and had never actually been out to find a cache.

As luck (or hard work) would have it, we were spending a long weekend in May 2010 in Marrakech on a corporate jolly that I earned myself after having a particularly good year. I was one of our top achievers in the EMEA region and as a result I got to join most of the other top 5% on a weekend away in North Africa. The invite was for two, so Kas came with me too, naturally. The juniors stayed at home with my parents.

The weekend consisted of a packed programme of corporate schmoozing with a very short window of just 3 hours on the Saturday afternoon for doing things not in the official programme.  It seemed a bit of a waste to go all the way to Marrakech and then come home again without seeing anything, so we booked an extra couple of nights in a hotel closer to the city centre (and somewhat cheaper) than the event location so we could have a look around before heading home.

On our final day Kas told me we were off into some random park near the city centre to try a new game. “Oooh er !” thinks I. The game in question was not quite what I was expecting, but it must have been OK because I’ve now done it nearly 5000 times in 4 years. I’ve done it in 15 different countries, in all bar 8 counties in England, and in several counties in Wales. Sometimes I do it with the kids, sometimes with friends, and quite often on my own. I’ve done it on every different day in the year.

2. Do you remember your first find?

Isn’t that a Pulp song ?

Absolutely ! It was the Cyber Parc Cache in the Cyber Park in central Marrakech. There’s a picture of it here.

I remember it mainly because we were, to say the least, comedy cachers. We were trying to use the official caching app on an iPhone 3. The GPS in those was suspect at the best of times, and there was no 3G signal either, so we were wandering around using only a compass and distance. It was hot, and we were being watched. And as I still had no idea what we were doing the conversation with Kas went along the lines of…

“What are we looking for?”

…and so on. But we did find it eventually – well, I found it because it was above Kas’s eyeline – and the rest, as they say in France, c’est l’histoire.

3. What device(s) do you use for locating caches?

That depends on what kind of a caching day it is. If I’m in town, or I don’t want to attract too much attention, or if I’m just doing a casual bit of caching I use my iPhone with the Geosphere app. If I’m officially “going out caching” (which is coded for “I’ll be away some time, and when I come back, I’ll be mucky”) I use my Garmin Montana 650 – the batteries last longer than the phone, it’s fully waterproof, and the GPS locator is (I have to admit after doubting it for a few years) much better than the phone.

I did once find two without any kind of GPS device. I stared at Google satellite view for a while, memorized the position and the hint, and then went for a walk. One of those two was quite a remarkable find. In a tree, in a hedge, and I found it by pacing out about 150 of my steps from a junction between 2 paths. Amazingly I found it in the third tree I tried. The other one that day was under a bridge, but I was still amazed to find it because it had been disabled after a load of DNFs.

4. Where do you live and what is your local area like for geocaching? (density / quality / setting etc)

I live in Milton Keynes. It’s very green for an urban area and we have standing permission from the MK Parks Trust to place caches so long as they’re not in dumb places where people will trample all the plants down. There are a lot of caches here, but mainly isolated rather than in walkable series.

5. What has been your most memorable geocache to date, and why?

The most memorable piece of tupperware was probably Sangam – It’s at one of the 4 centres belonging to the World Association of Girl Guides & Girl Scouts (WAGGGS) and it’s in Pune, India. It’s a simple little puzzle and I went there on an otherwise dead Saturday morning before catching a flight from Pune to Chennai (via Hyderabad – don’t ask!) in the afternoon. Given the location, I thought I’d better warn them. They were most welcoming and gave me a full tour of their site before abandoning me to look for the cache. And they gave me tea. And a biscuit. And before you get any dodgy thoughts about me, there were no girl guides there at the time apart from the staff, and part of the reason I went was so that I could raid their shop and bring home lots of bags, badges, and other stuff for my two daughters.

Without a doubt the best experience (and best find) was attending the first ever Giga Event in Munich this August. Myself and Travelling Pumpkin (daughter the elder) went down on the bus that Simply Paul organised. It was an excellent trip and a brilliantly done event.

If one of the kids is with me that would be Pringles, Maltesers and more Pringles. Otherwise we don’t get very far.

If I’m on my own it would be a small screwdriver, a notebook and my camera.

7. Other than geocaches and their contents, What is the weirdest thing you have discovered whilst out caching?

Simply Paul. Nothing else compares.

8. On a scale of 1 to 10 where 1 is I am obsessed by numbers and 10 is I am all about the experience and the quality of each individual cache. Where do you put yourself?

When I started I was probably a 9. Now I’m into it a bit more I’m probably about a 4. Most of my caches are done on quite long walks out in the country, where most of the caches are quite simple but the overall effect is a large total and a healthy suntan, most days.

9. Describe one incident that best demonstrates the level of your geocaching obsession.

Two whole days on a bus to attend and event. OK, it was a good event, and we visited 8 different countries on the trip, but that’s something that would be hard to convince a non-cacher about – especially the part about watching the Sound of Music on the bus’s TVs whilst driving back through Austria and Switzerland.

10. Have you picked up any caching injuries along the way?

Yes. I left a big chunk of my scalp hanging from a sharp stick in Blackpool one night. It was a hedge that had recently been cut by one of those massive council fastened-to-a-tractor things, and it was dark, and I didn’t see the pointy end. It might have been worse. I guess it was about 4 inches away from taking my eye out.

11. What annoys you most about other geocachers?

Seriously, I can’t be doing with all the stressing about logging protocol, and whether you’re allowed to find puzzles you haven’t solved and whether you can claim a find on a cache up a tree when you sent the kids up, and the like. It’s a bit of fun, innit !

12. What is the dumbest thing you have done whilst out caching?

There was an FTF hunt in Oakhill Wood one night. I have no idea why I went. The place gives me the willies in daylight never mind at night. And I went on my own.

I found it though.

13. What do your non caching family and friends think of your hobby?

The kids come caching with me sometimes. Kas comes out occasionally. She thinks I’m obsessed. But then she runs marathons for fun, so calling me obsessed is leaning towards the pot-kettle-black scenario. 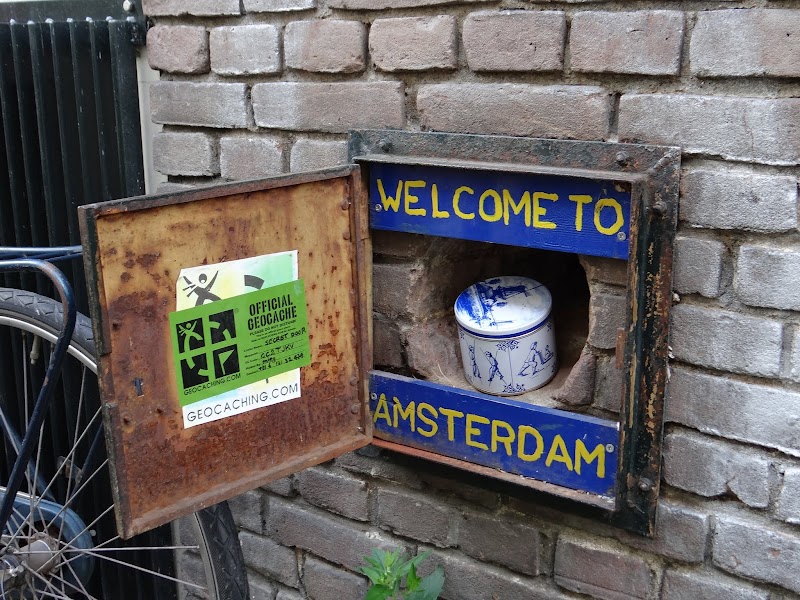 14. What is your default excuse you give to muggles who ask what you are up to or if you need help?

Most of the muggles I meet when out caching tend to fall into the “livestock” category. I’ve had very few human muggle incidents and to be quite honest I don’t spend a lot of time trying to disguise things – you see a lot of people out on the streets doing much more weird things than furtling around in the bushes. I have never been challenged in a threatening way. I generally go with the “I’m playing a treasure hunting game” line and see where the discussion takes me. A couple of times when people have been in my way and don’t look like moving I go with the old “you’re not really seeing me do this, and there is nothing here of interest” one, which is a surprisingly good way to knock someone off guard and make them relax.

15. What is your current geocaching goal, if you have one?

Probably colouring in all the English counties on my MyGeocachingProfile.com profile. As I write this post I have 6 to do – Essex, Suffolk, East Yorkshire, Isle of Wight, Devon & Cornwall.

16. Do you have a nemesis cache that despite multiple attempts you have been unable to find?

I used to have, until I found them all. As things stand now it would have to be the promise of something pretty spectacular to make me go back for a second attempt at anything. I have learned to embrace the inner quitter.

17. What 3 words or phrases best sum up what geocaching means to you?

Good question, if only because it requires at least three answers.

18. What prompted you to start blogging about geocaching?

I find it relaxing and it helps me sort of organize my memories. I’m a bit retentive at the best of times and I like to feel I’ve captured something about my trips other than the photos.

19. Which of your own blog entries are you most proud of.

I’m not one for championing my own work, generally, but I quite like Imbibing Imber.

20. Which other geocaching blogs do you enjoy reading?

Well, Washknight’s one, obviously. There are no others. (Can I have my fiver now please ?)