For our second stop in Greece we chose the magnificent collection of monasteries at Meteora. 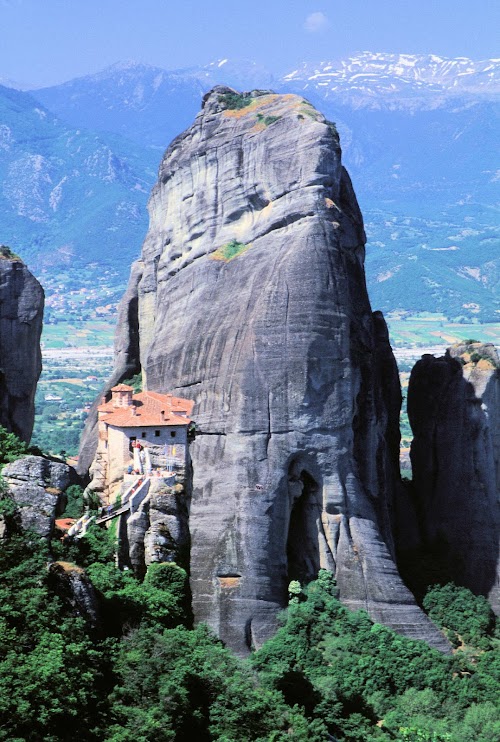 To get there, we picked up our rental car in downtown Athens and began the slightly risky driving experience of trying to get out into the Greek countryside. It definitely took some effort to get around and out of Omonoia Square and we lost sight of any direction signs for other bits of Greece, so eventually we just decided to drive in a straight line along the same road until we crossed a motorway. This gave us the opportunity to figure out where we were. Oh the joys of travel in the days when Google maps on the phone just wasn’t the done thing.

Once we found a motorway we picked our way around Lamia and on to Trikala and eventually to Kalabaka. From Lamia onwards it was off motorway, and hence a bit slow.

On the day we drove up we arrived in mid afternoon, so we had time for a quick recce visit up into the “monastery zone” to get the lay of the land.

The hotel we stayed at in Kalabaka was possibly the worst of the trip. It wasn’t bad as such, but it felt a bit half finished, especially in the bathroom. Still, we were only there for a couple of nights, so how bad could it be ? We’d pre-booked all our hotels individually on the internet before setting off, and we ended up with a bit of a mixed bag.

On the following day we did the full monastery trip, including driving up as close as we could manage to the four or five that are close to roads, and making a few extra stop offs at good viewpoints for taking panoramic photos. I remember we were actually trying to reproduce a shot we’d seen of the Rousanou Monastery that we’d seen in a coffee table photobook we owned, and which was the main inspiration for us going there in the first place. We sort-of got it.

The shot in question is the individual one on this page (not the ones in the grid), and the key is to understand that the monastery is on a completely different pillar of rock from the enormous thing behind. It is actually a good 500m in front of the taller rock pillar, with a deep valley and a road between the two. So yes, that is a vertical cliff that the monastery sits on. There is access to that one up a near vertical set of ladders and steps you can just see in the photo. Other photos in the grid below were taken in and around the base.
But you get the picture, as it were. Optical illusion. 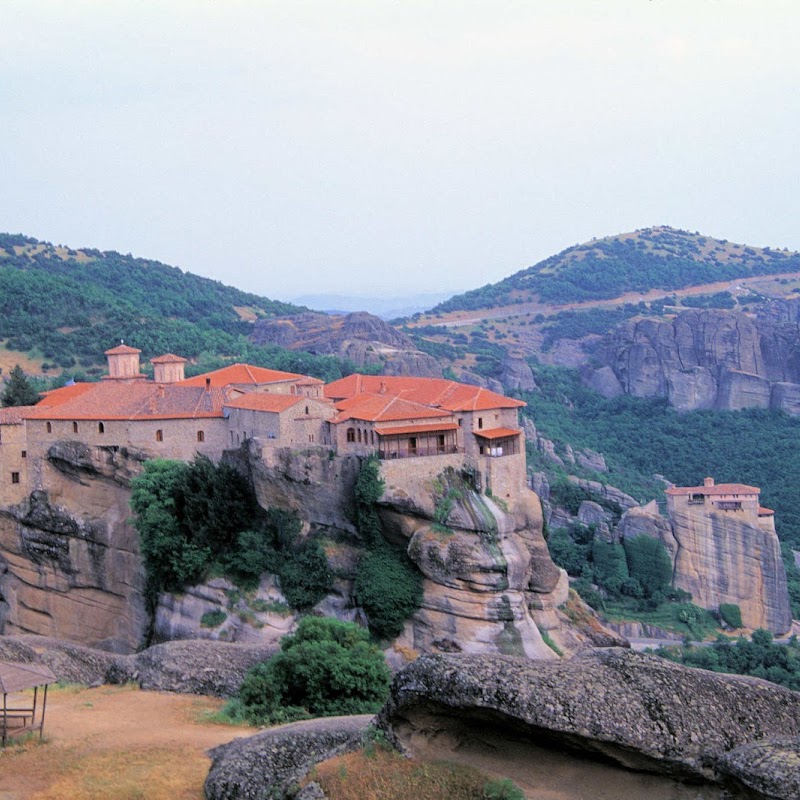 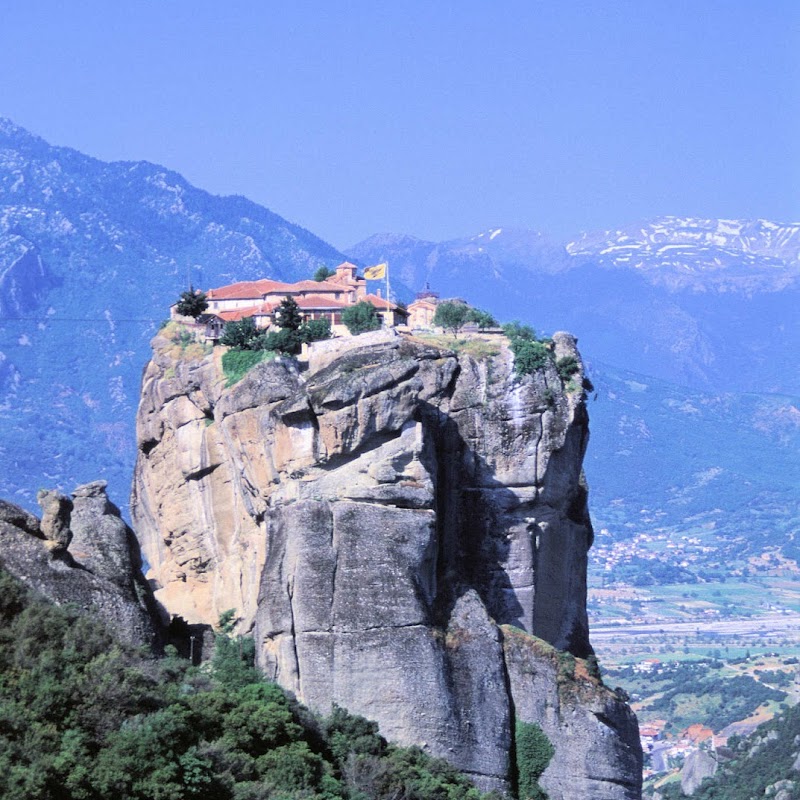 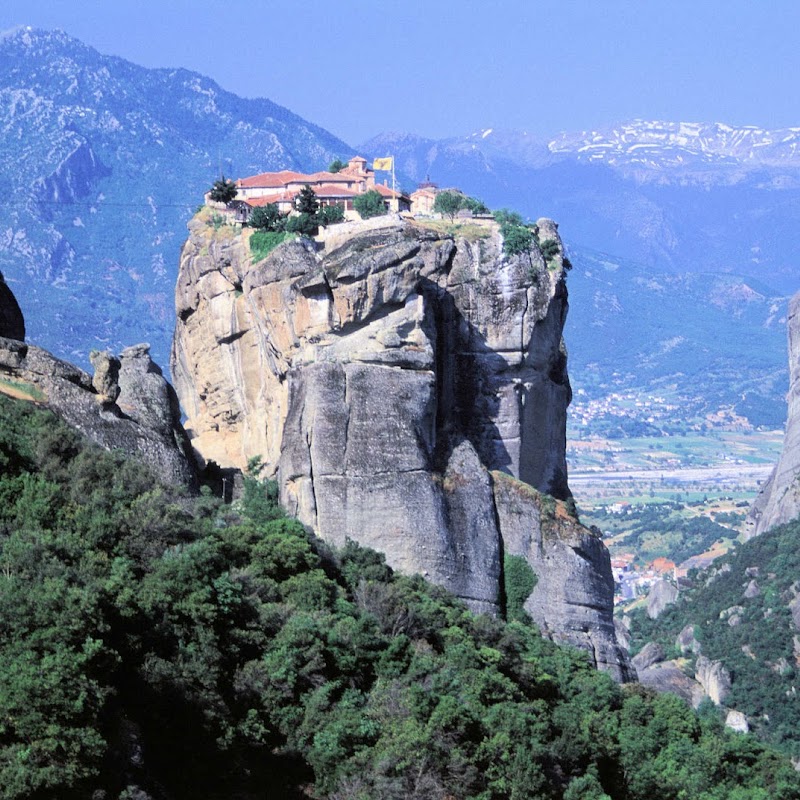 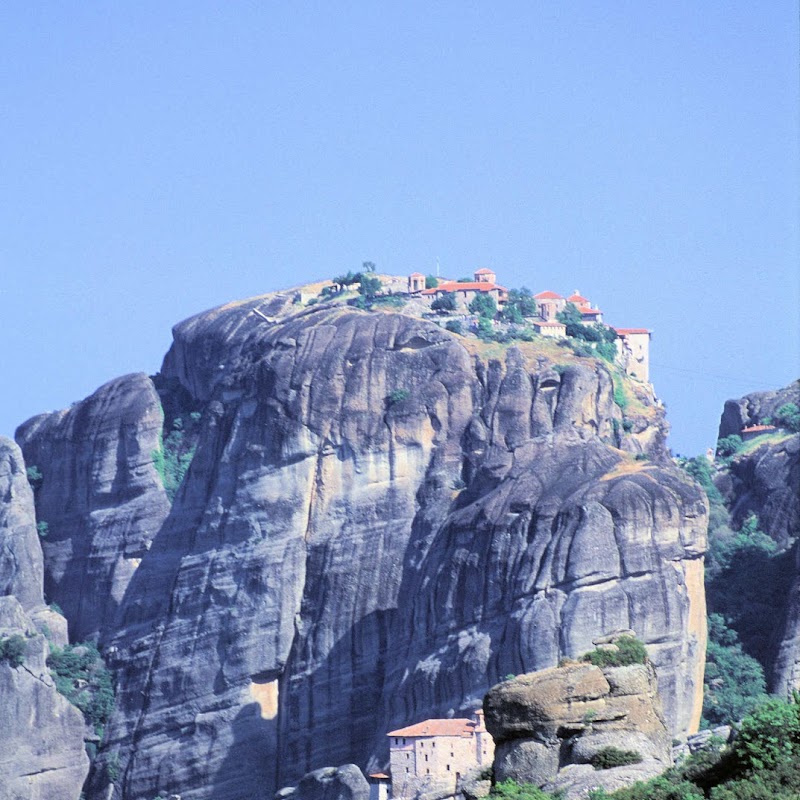 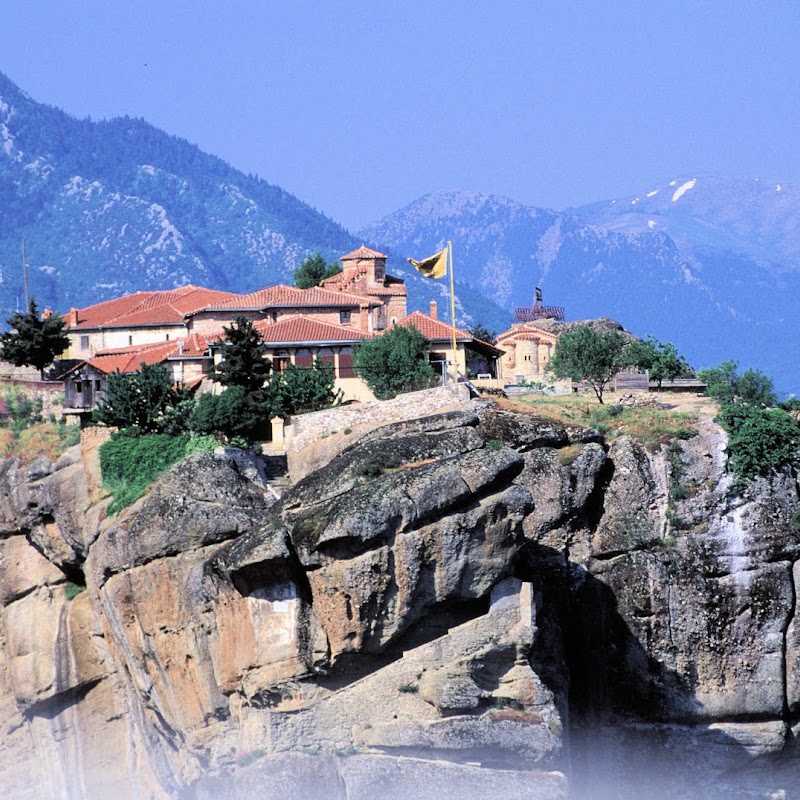 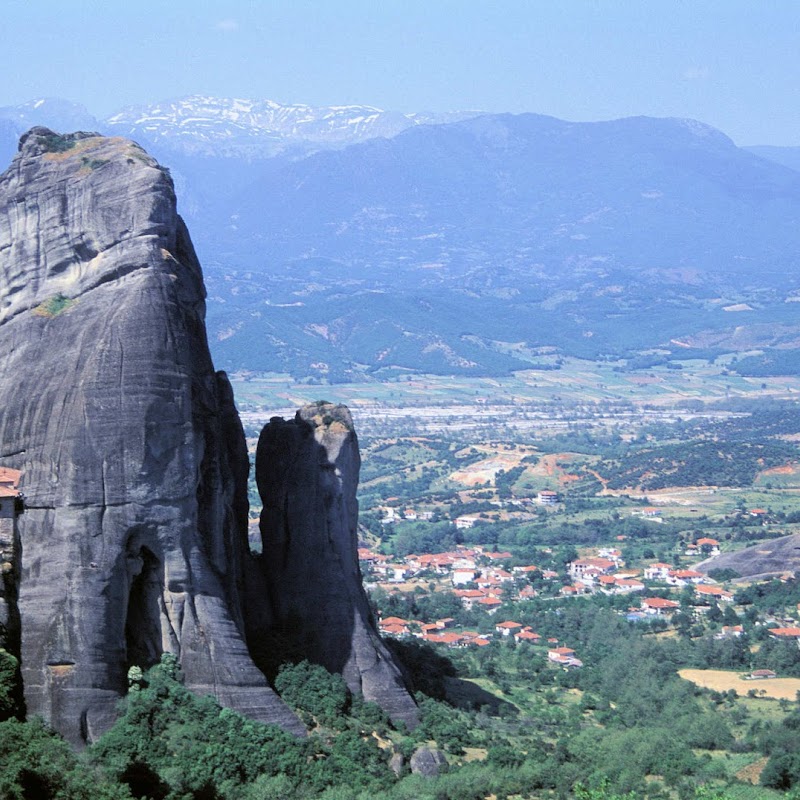 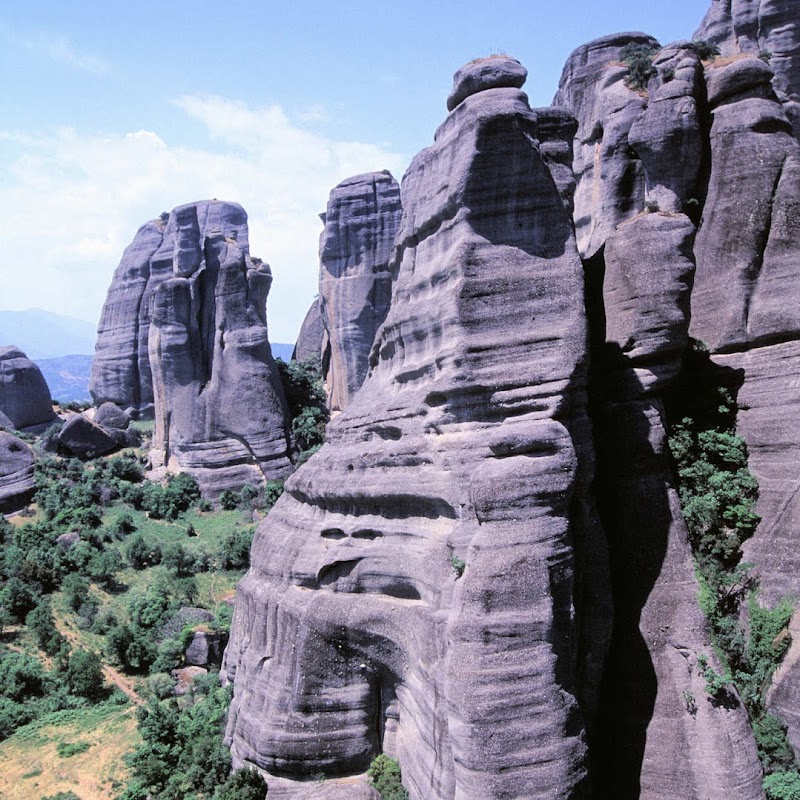 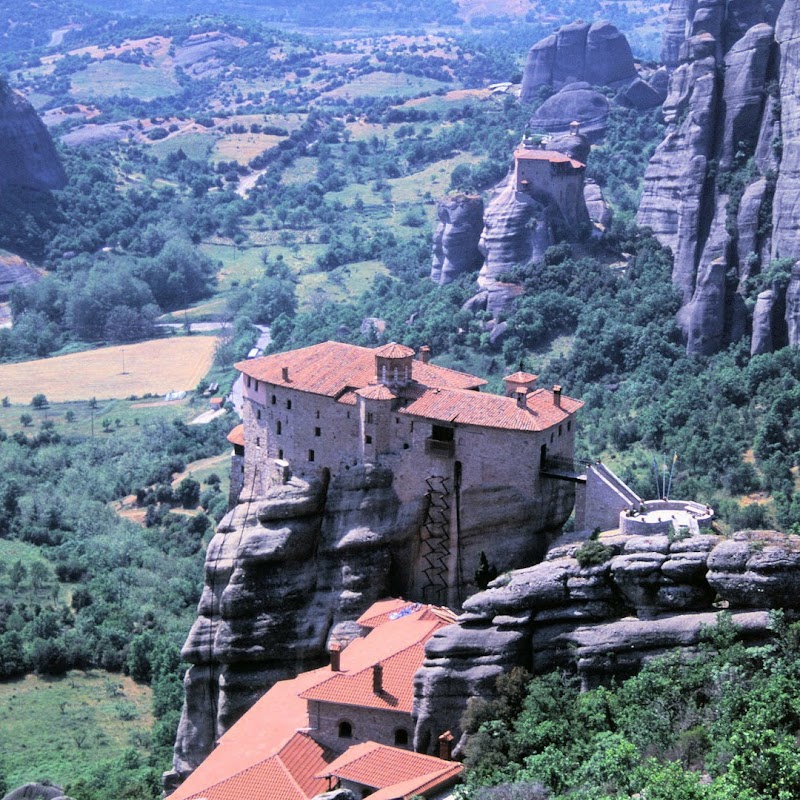 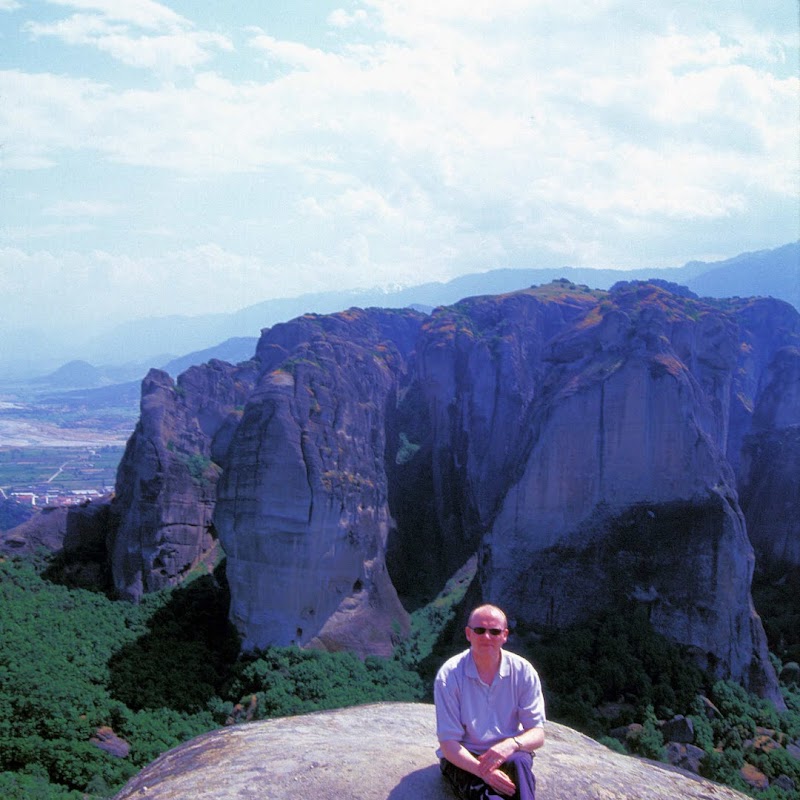 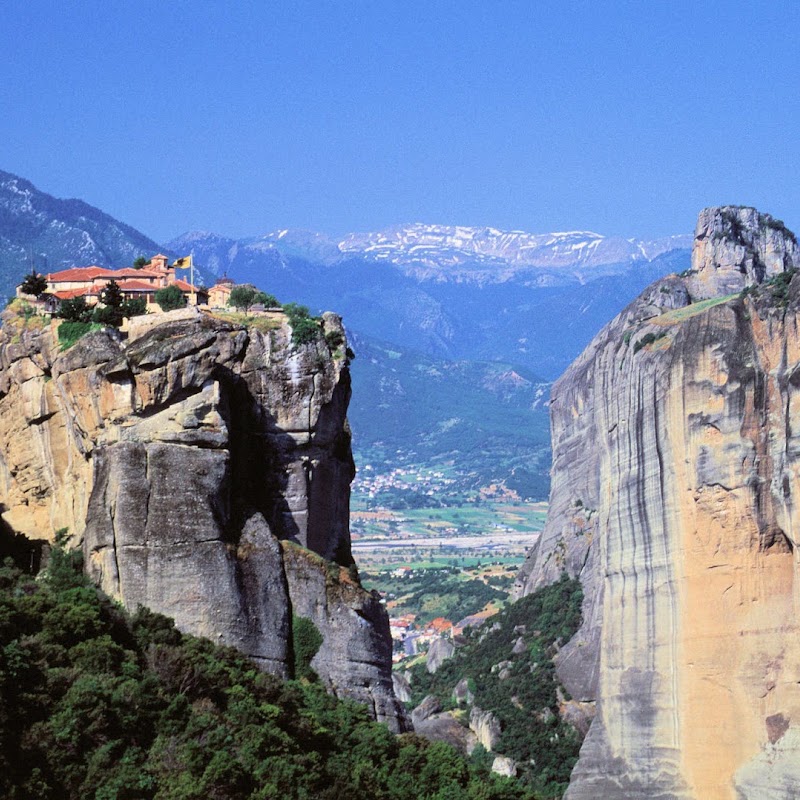 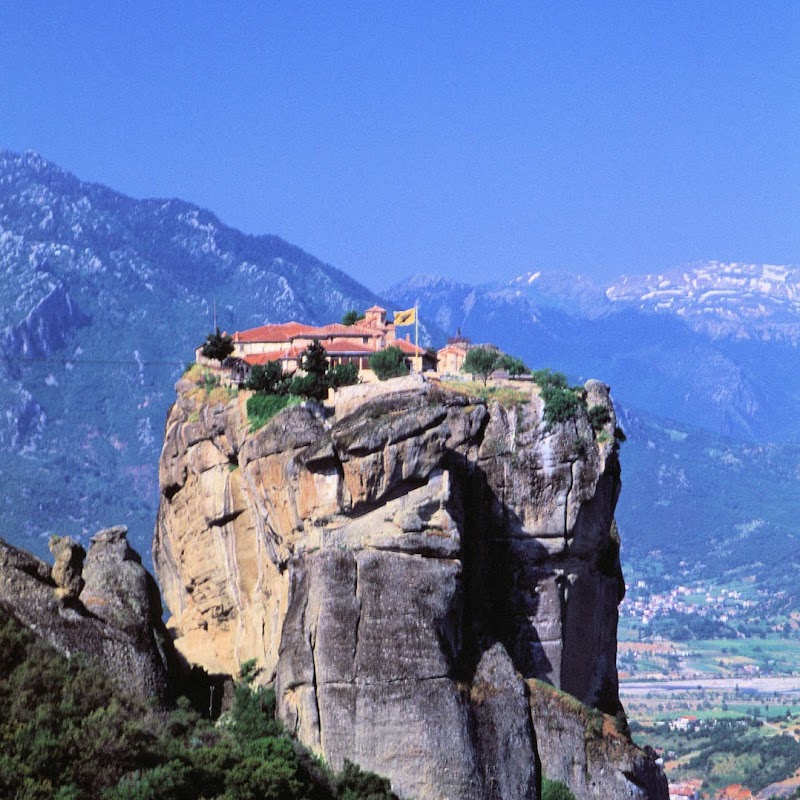 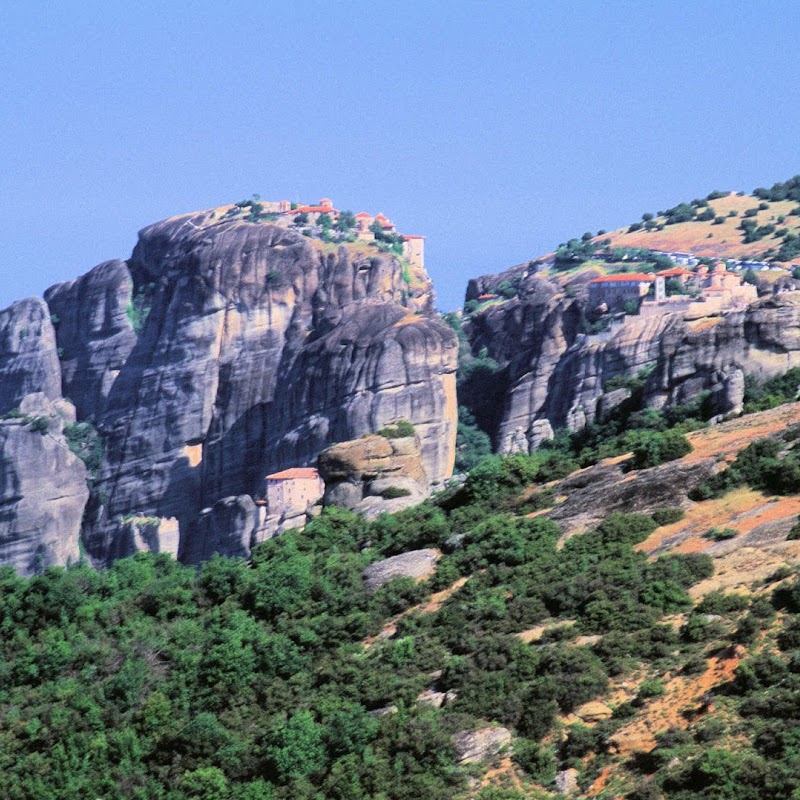 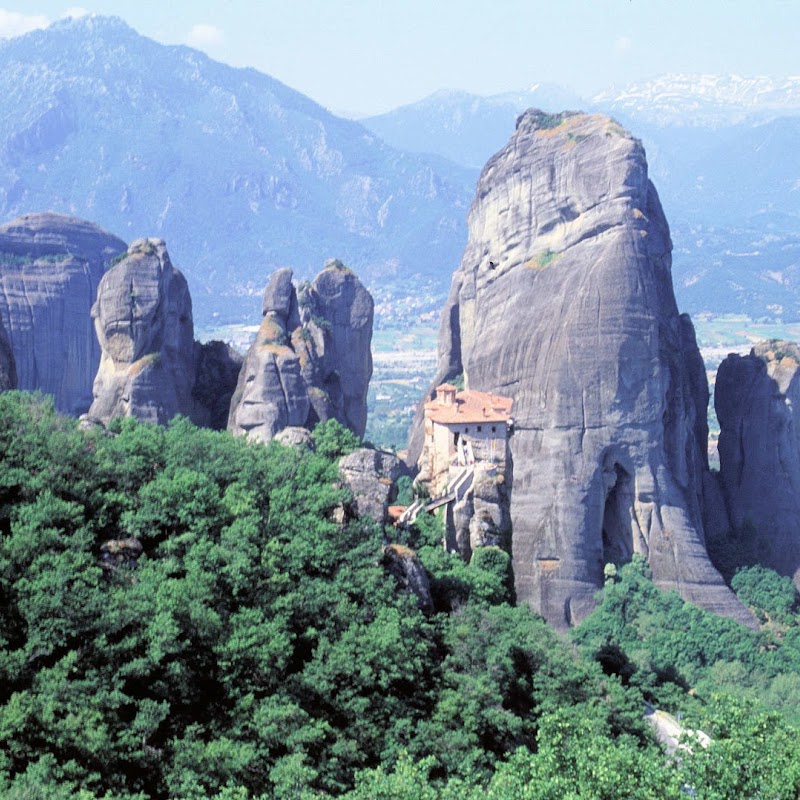 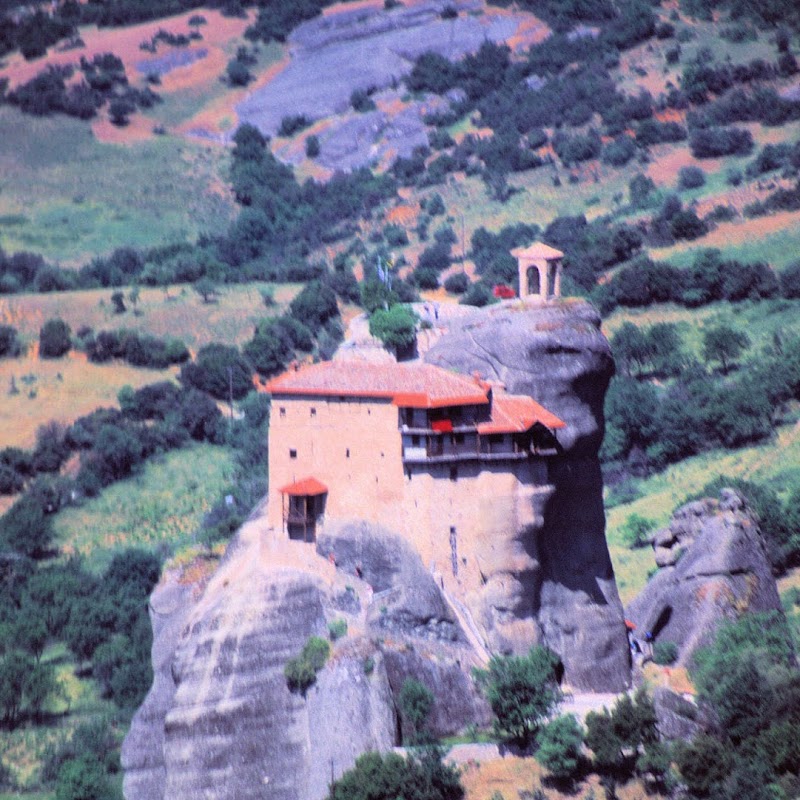 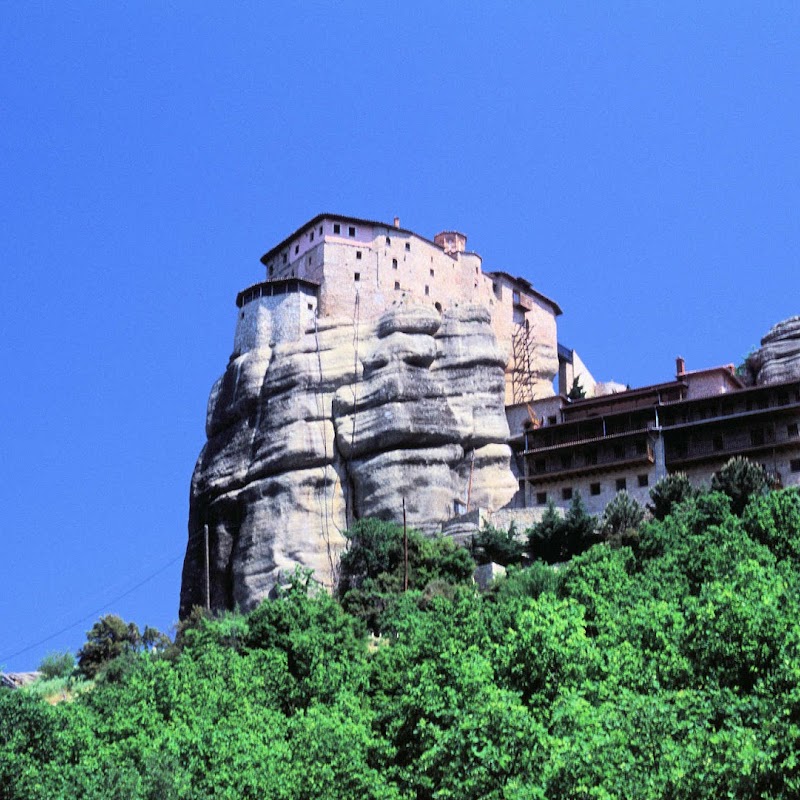 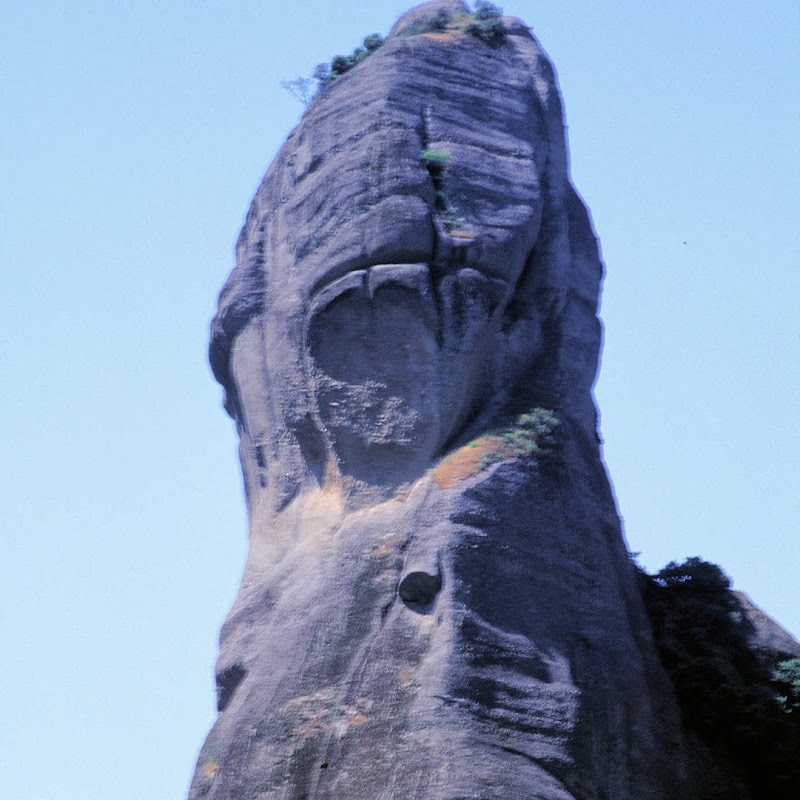 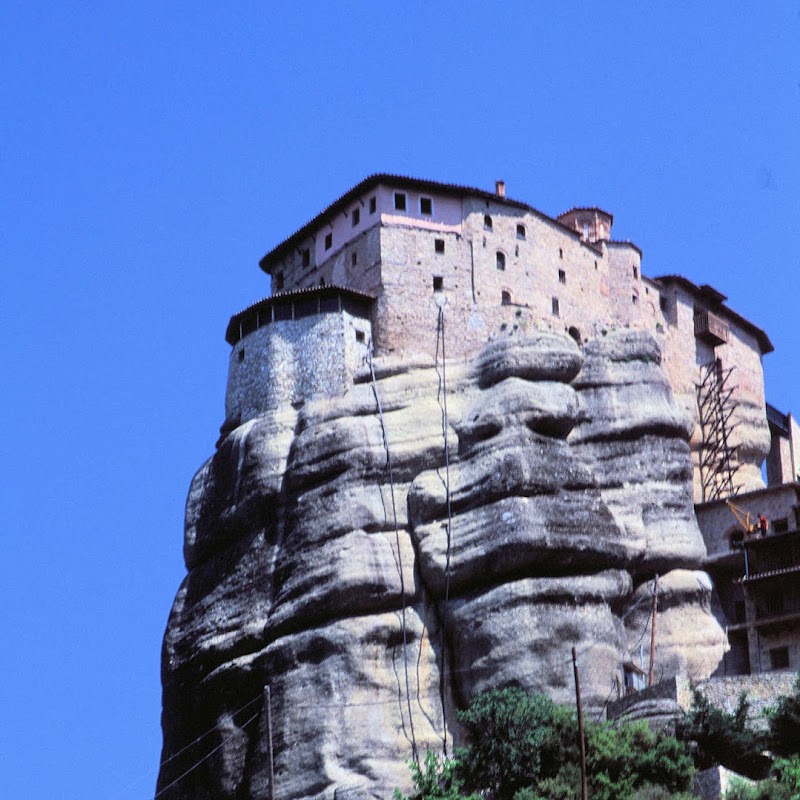 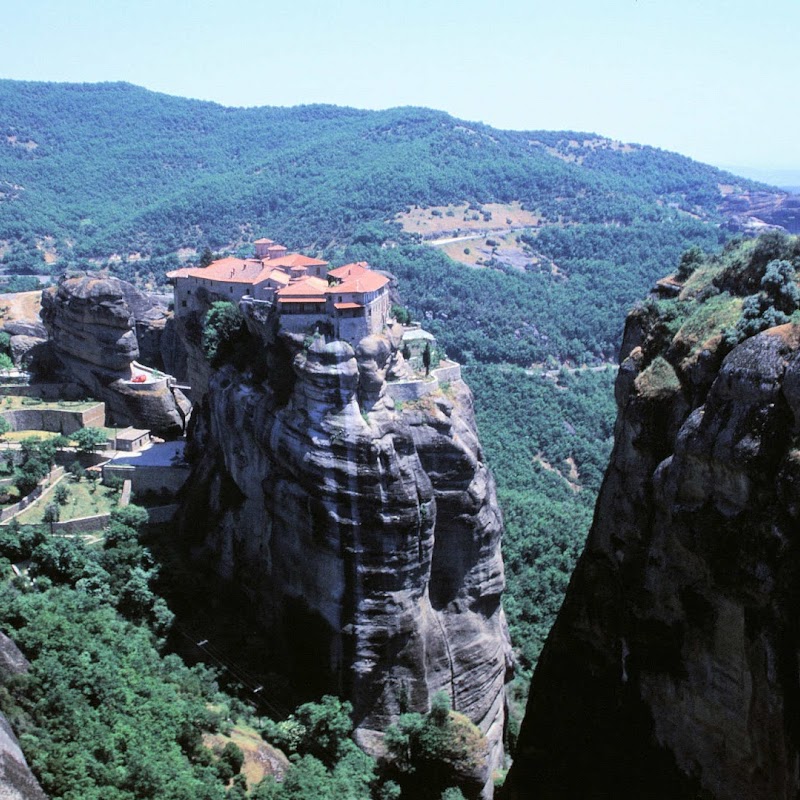 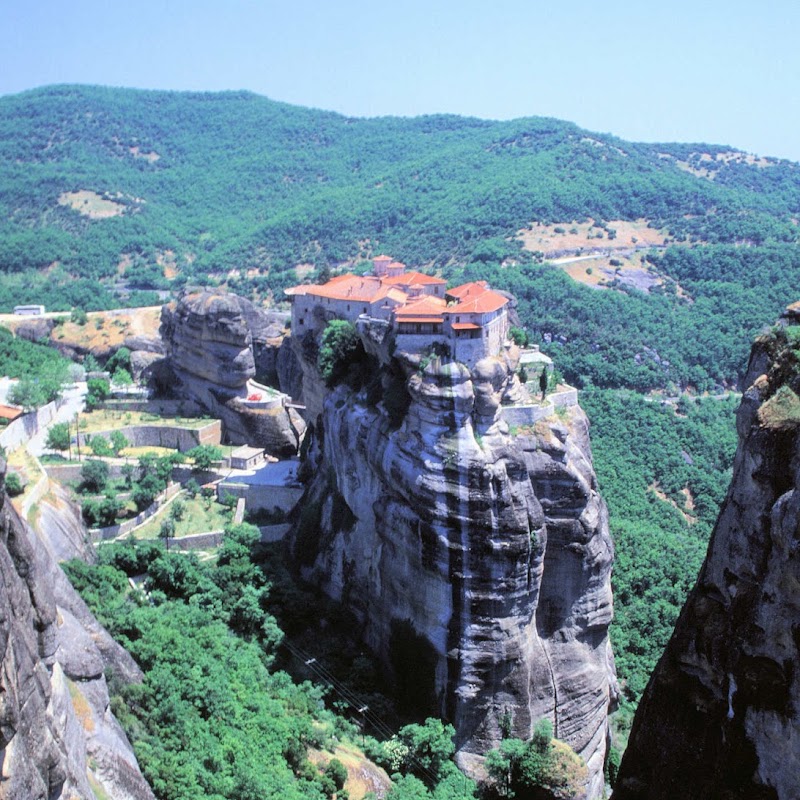 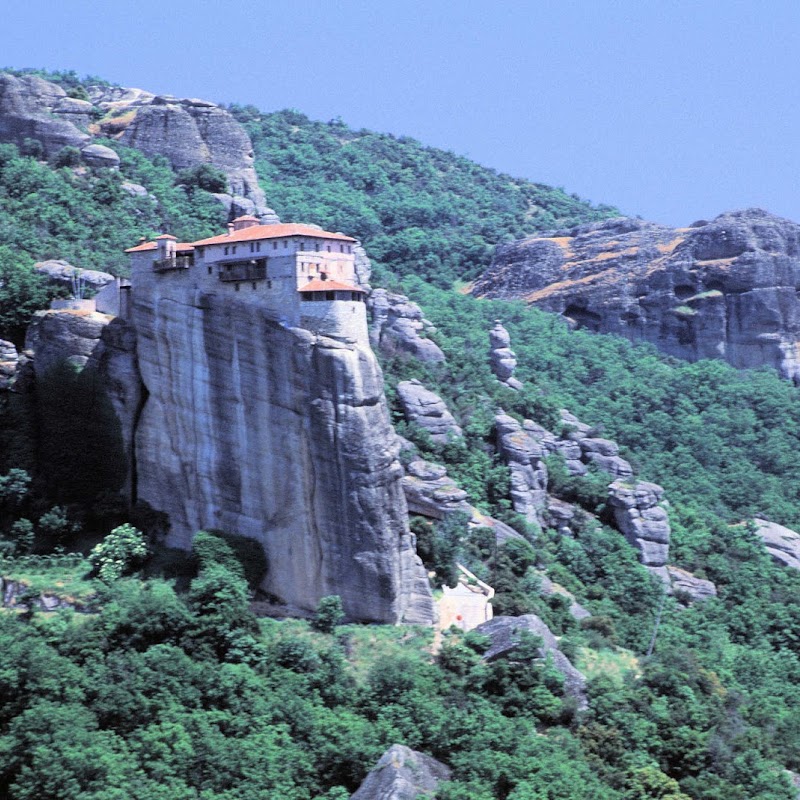