When we started discussing summer holidays with the kids at the end of last year the girls suggested that there were various bits of Italy that they’d quite like to see. I think the discussion was held in a restaurant one evening, although I can’t remember where (or when), and we concluded that we were all prepared to try a “touring” holiday whereby we’d rent a car and book a whole series of hotels so that we could travel around and see a good selection of places. Ami wanted to visit the self-styled fashion capital of Europe (in Milan), Izzy wanted to go and eat spaghetti bolognese in Bologna, and someone suggested we should go and pay homage to the original Italian Job film in Turin. I saw a cookery programme on daytime TV once where celebrity Italian chef Gino D’Acampo went to the Ligurian coast to supposedly the best gelateria ever. None of us had ever been anywhere in northern Italy other than a family holiday I had with my folks near Venice 40 years ago, and a little jaunt over the border while we were in Chamonix a couple of years ago (see Three Countries). And none of us had been to San Marino. All of which felt like a sufficiently large number of things on the hit-list to make up a whole 2-week holiday.

I’d like to say we planned something more than that, and in effect, we did plan quite a lot more of the logistics such as the flights, hotels, car, and the like, and we made a bit of a hit list of places to go on each day, but we didn’t really plan specific things to do or places to go in each location really. We just sort of assumed that the right thing to do would come to us naturally.

The right thing to do on this Saturday morning was evidently to get up while it was still dark and drive to Heathrow for our flights. We had an early morning flight to Linate and Kas had booked the “Meet and Greet” parking, partly because the “Pod” parking was full and partly because the “Meet and Greet” wasn’t really much more expensive than the regular option. We had to be at the parking by 5am, so allowing a bit of wriggle room we left home at about 3:15 and stopped for a coffee at the BP garage on the way out of Milton Keynes. I don’t like cutting it fine when driving to airports, but we did arrive rather too early. We’d allowed about 90 minutes to Heathrow from home and in the end it actually took about 55. The M25 is rarely empty and is normally what you’d call “chocka”, but at this time of the morning on a Saturday it’s really quite empty. We arrived so early that we got there before the guy from the “Meet and Greet” service, so we had to mooch about for a bit until he turned up.

And then we were off into the terminal building with remarkable ease for our check-in. Well, bag drop, because we’d already checked in. We were too early for that as well because apparently BA doesn’t open the desks until 5am, but Kas noticed a dedicated check-in line for people with children under 12. We still have one of those so we joined that queue rather than the somewhat larger line waiting for the general bag drop.

Once we eventually did manage to dispose of our suitcases the rest went very smoothly. We got through security controls quite quickly and then hopped off to Starbucks for breakfast. We got called down to our gate quite early because it was a bus boarding rather than an air bridge. The bus took long enough that I started to think the plane might be cancelled and we actually had a bus replacement service, but eventually they found us an aeroplane and we got onto it.

And we sat there for a while because there was a delay in getting a take-off slot, apparently, so by the time we got airborne we were 30 minutes late.

The pilot managed to catch most of that up on the flight, and the flight was fine apart from a bit of turbulence which stopped me from going to the toilet twice. I think the pilot was watching how close I was to the front of the toilet queue and every time he noticed I was getting close he faked some turbulence so he could put on the seatbelt signs and make me go and sit down again. So when we reached Milan I really needed the toilet.

Our baggage came out fairly quickly (and in still in one piece each) so we got through that part fairly quickly, found our chosen car rental agency and began the lengthy process of listening to them explain exactly all the things you’d expect to be included in the cost but actually weren’t, and hence needed to be paid for. This time around I’d gone with the third-party insurance to cover the rental company excess on collision damage but had somehow neglected the part whereby Sixt told me at booking time that they don’t include breakdown cover in the online price. So they’ll rent you one of their cars, but if it breaks down you have to pay them for the privilege of getting someone to drive out and repair/replace it. If you don’t buy theirs and the car breaks down, you have to pay for a recovery vehicle yourself, apparently. Well I hadn’t seen that one coming, and the third-party insurance didn’t appear to cover it. I did think about just walking out and trying someone else, but there’d be no guarantee I could get a similarly sized car for a comparable amount of money if I just walked up to a desk, so we sucked up the extra cost and just decided not to use Sixt again.

For once they gave us the car that was on the page when I booked it – a Peugeot 5008 – rather than the “or something similar” option. We wanted to make sure we had a big car because we had a lot of miles to cover and particularly had a lot of miles to cover between hotels, when we’d have all four people plus two weeks worth of luggage onboard. We didn’t want to feel cramped.

The car was away across the car park somewhere, and so we got our first experience of the summertime heat and the strength of the sun. It was a bit warm.

The vehicle itself surprised me a little bit by having a manual gearbox, but otherwise it was spacious and had good air conditioning, which would prove to be a boon over the next couple of weeks. It also had built-in satnav that was already set up to speak to us in English, so we programmed in the address of our first hotel and started driving. While we were driving we initiated the ritual of naming the satnav. Last year’s was definitely called Cynthia. This years was, we decided, called Violet.

Violet got us into roughly the right area but not actually to the hotel, so Kas had to do a quick bit of fine tuning while I kept driving in a straight line and hoping for the best. It turned out that the hotel was about a kilometre further on down the road.

The hotel in question was the very grandly named Ibis Styles Milano Est Settala. I’d deliberately chosen somewhere outside the city because the city hotels were much more expensive and very few of them have parking. Plus, on our four nights here we didn’t really expect to spend more than one or two days actually in the city of Milan itself. So Settala is to Milan what Coleshill is to Birmingham – a small town that’s close enough to make an easy trip in, but far enough away to avoid the expensive city-centre premium prices. Meh ! We have kids, so nightlife for us involves seeing how long we can keep going before we give in to the incessant moaning about boredom or tiredness. I guess that’s the problem with going for hotels rather than self-catering. We were all in the same bedroom and therefore more or less all had to go to bed at the same time.

Anyway, I digress, as I often do.

Despite us turning up 3 hours before official earliest check-in time the hotel had our room ready and was very happy to let us move in. It was kind of bigger than we expected and set an unfortunately rather high standard for the subsequent 7 hotels to live up to. The room was spacious, we had a balcony, the bathroom was massive, and everything worked. 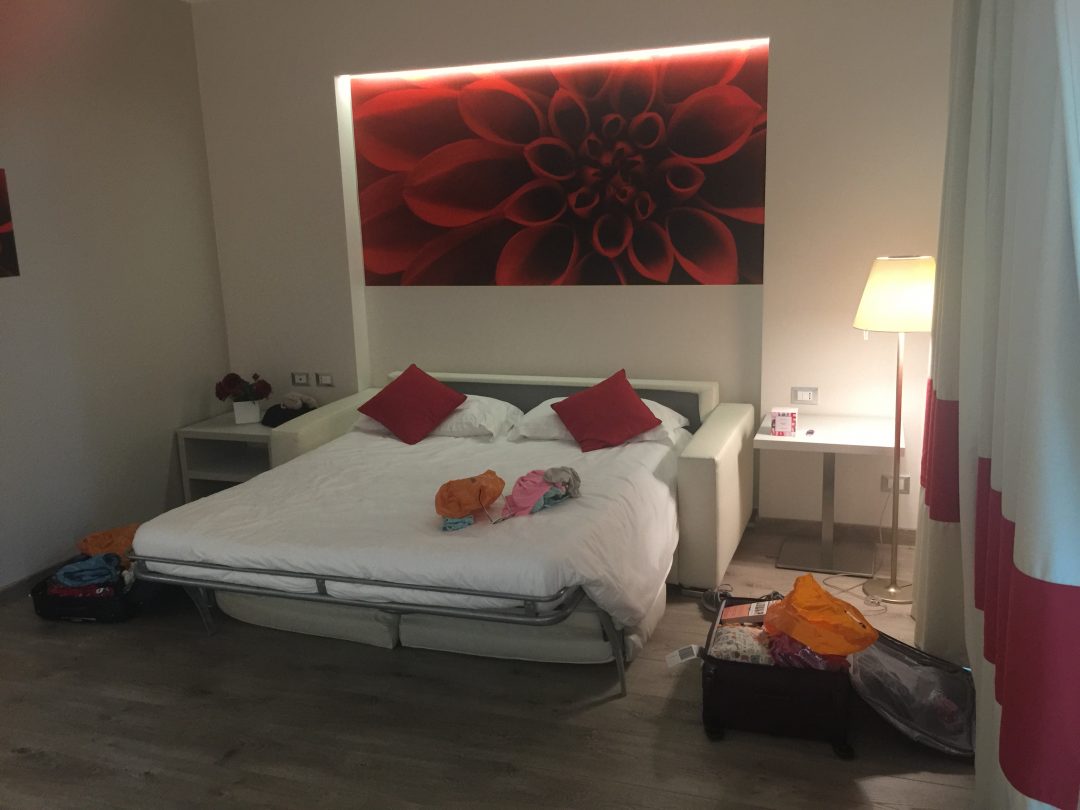 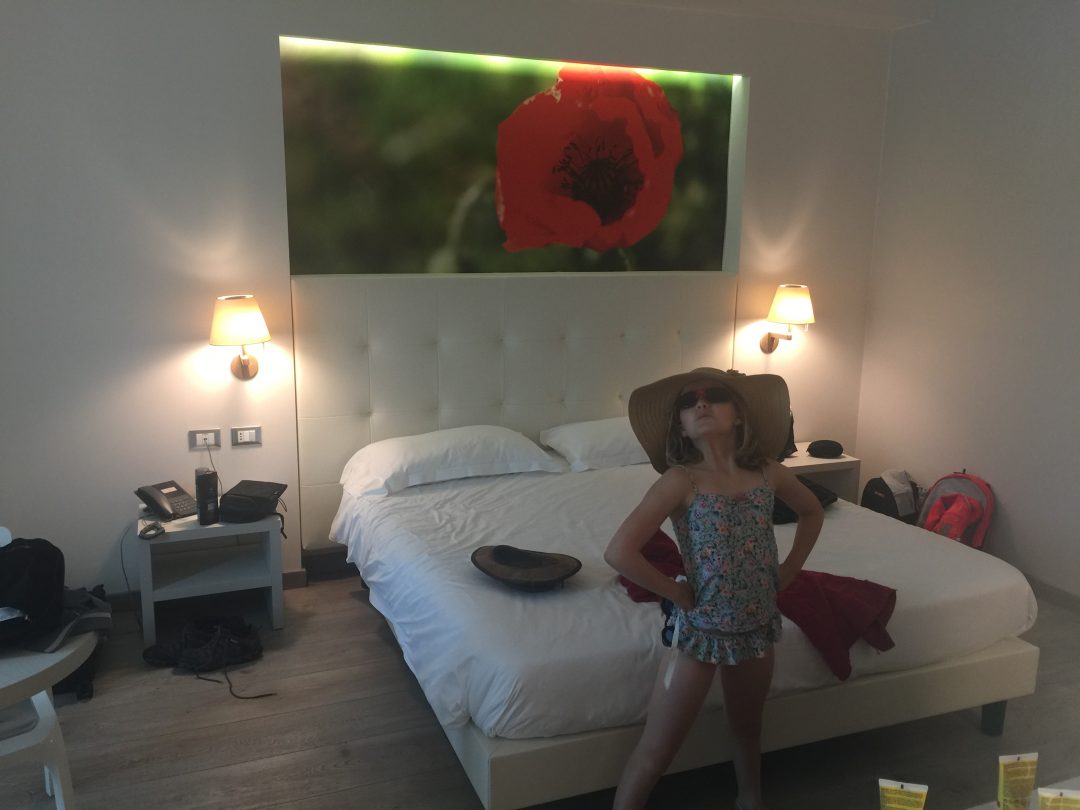 We’d not planned anything else for the day as we didn’t really know what time we’d get here, so the kids were delighted to hear us say that they could spend the afternoon in the swimming pool. And that’s what they did, non-stop aside from a couple of short breaks for drinks.

We forced them out of the pool at 5:30 and made them come in for a shower. We hadn’t really had lunch and it had been a long day, so we decided to go out for dinner fairly early and then get a good night’s sleep. 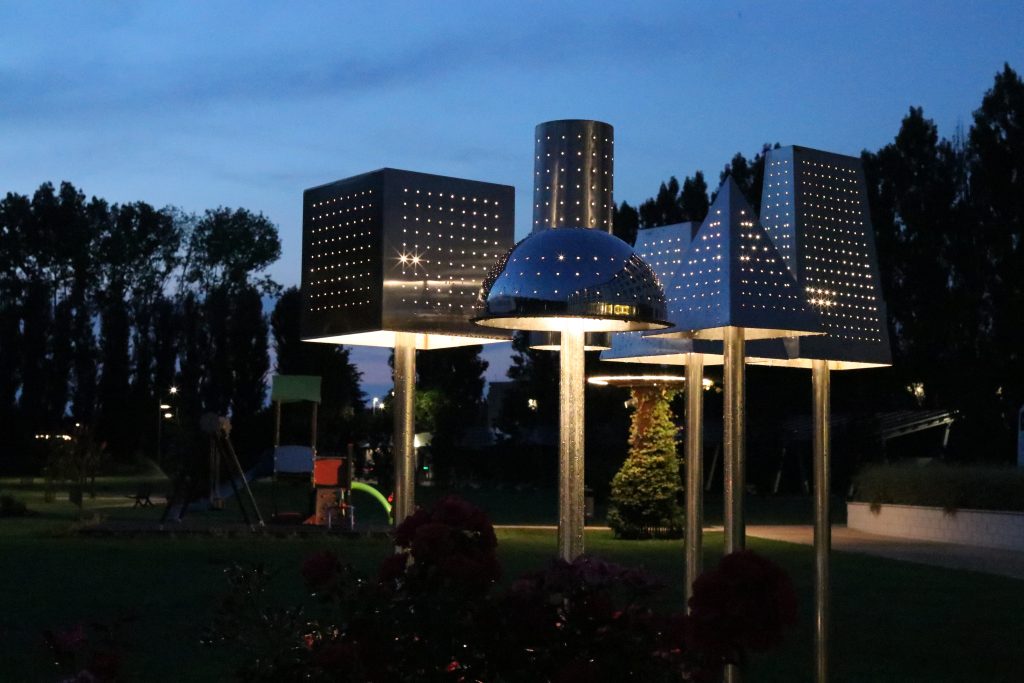 We googled local restaurants while the kids were getting ready and noticed a few in the nearest village (Caleppio).

First of all we tried a burger bar, but they weren’t open in the evenings, so we ended up at a Chinese/Italian fusion sort of place called Zhu Maochao. It was a bit of a weird mix of pizzas, pastas and Chinese dishes, but reviews we read said it was fine and it certainly didn’t seem to be over-priced. Anyway, both of the girls were grumpy-as, which we assumed was due to exposure to sunlight combined with a lack of sustenance during the afternoon. It took a little while for them to return to normality.

Back at the hotel, we decided to briefly take a walk round the gardens, but very quickly wished we hadn’t. We started getting bitten by insects more or less immediately and it took about 5 minutes of frantic photo-taking before we’d had enough and retired to the interior.

None of us really had the energy to sit up drinking or talking, so we just went to bed. It had been a long day.