We had an early breakfast and made some sandwiches to take as provisions with us. The weather looked good, or at least as good as you can expect in the Lake District in May, in that it wasn’t raining or snowing. It was bright, and a bit windy.

When Kas was a girl, she apparently made several attempts to walk up Skiddaw with her dad, but never quite made it to the top. Admittedly she was under 9 years old the last time she tried, so not that surprising, I guess. Anyway, on this hotel she was absolutely insistent that we would make it to the top. Both kids seemed keen to give it a go, and we had suitably attired ourselves with a collection of walking boots, many-layered clothes and lightweight waterproofs, so what could possibly go wrong ?

We drove up to the car park at the bottom of Latrigg because it looked like the best place to start. It’s a rough road up but that’s why I got a car with high ground clearance, although I didn’t lie the look of the great big channels down the side of the road that the December 2015 floods had made. They are seriously in need of a lorry load of hardcore up there.

The thing about Skiddaw is that it’s quite an easy climb, because there’s a graded path all the way up, but it is considerably steeper at the bottom than at the top. I guess this is true of many UK mountains because most were formed by glaciation. Skiddaw is well know for being generally shaped like an upside-down pudding bowl, except with less pudding.

There’s a route up from the Latrigg Car Park that is cunningly known as the Skiddaw Path. It goes along the flat for a while before ascending at a scary rate on a zig-zag course that can be seen from most of the Keswick area, at least on a clear day. When you get to the top of the steep bit (known as Jenkins’ Hill) you come to a flatter section and you go out of sight of anyone standing in the car park or down in the valley. We had a little break around this point, where we sat in a ditch, ate some snacks and took a few photos. The “sitting in a ditch” part was encouraged by the wind as well as by the fact that it was better sitting there than on a flat bit of grass. It’s quite an impressive view from where we stopped. 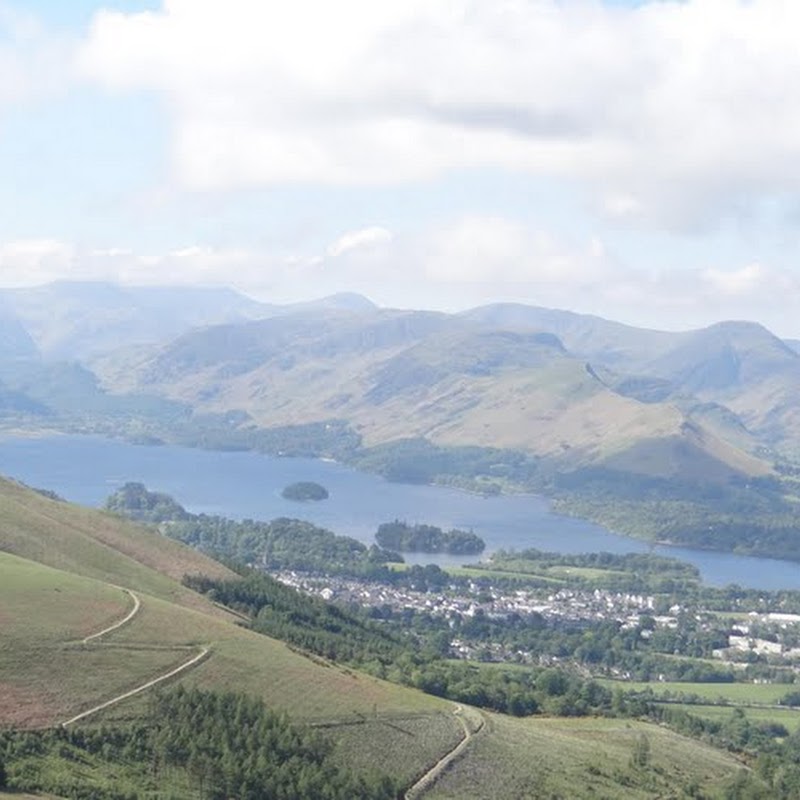 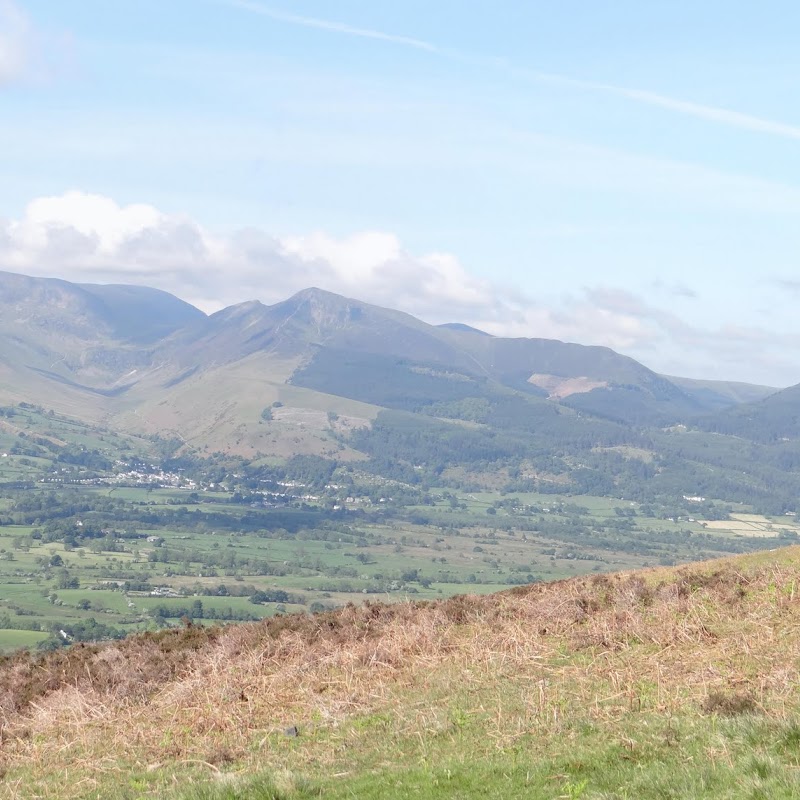 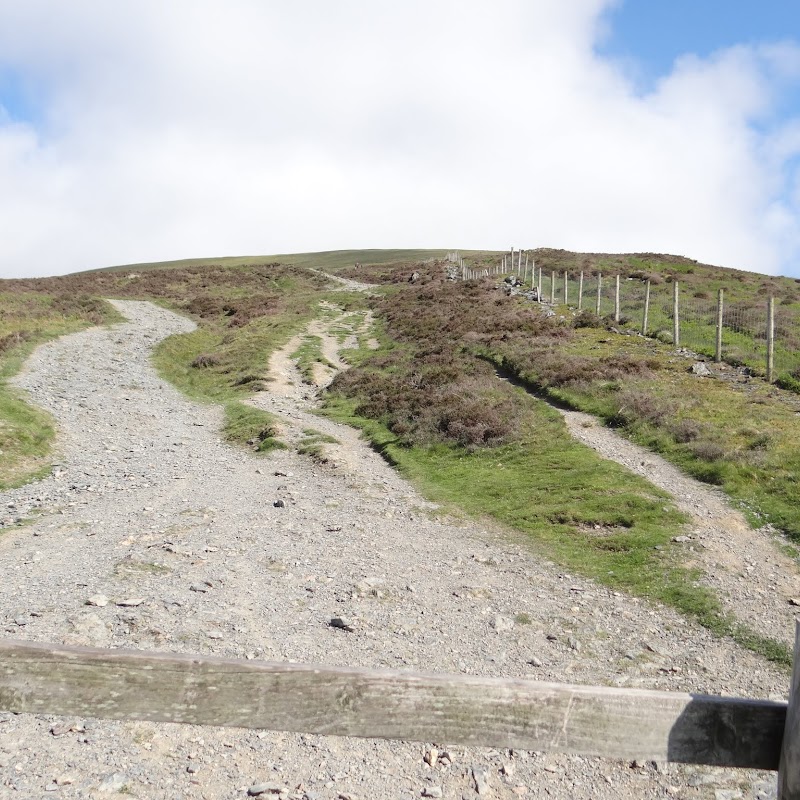 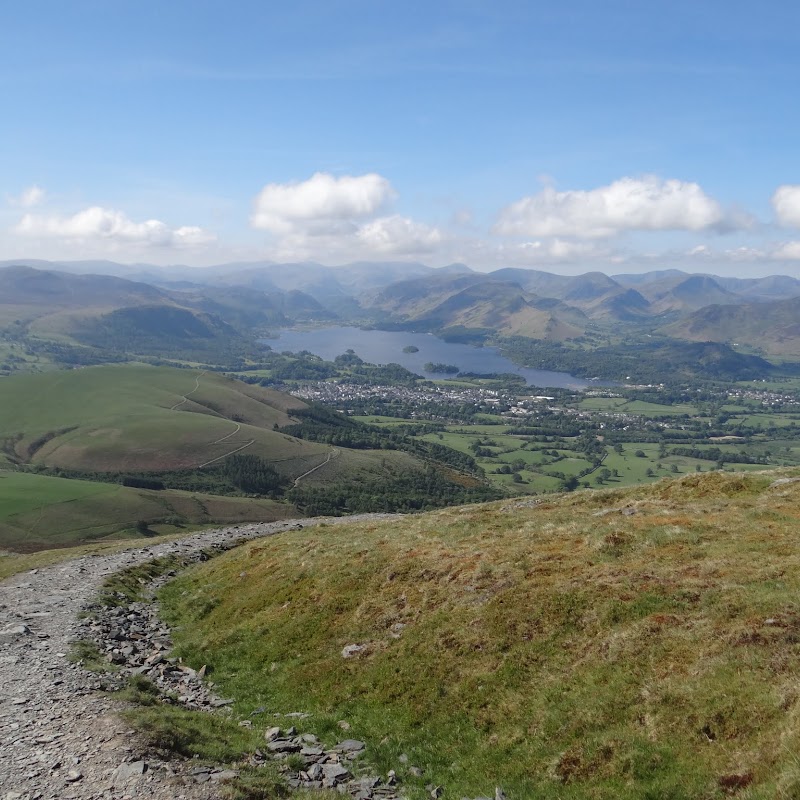 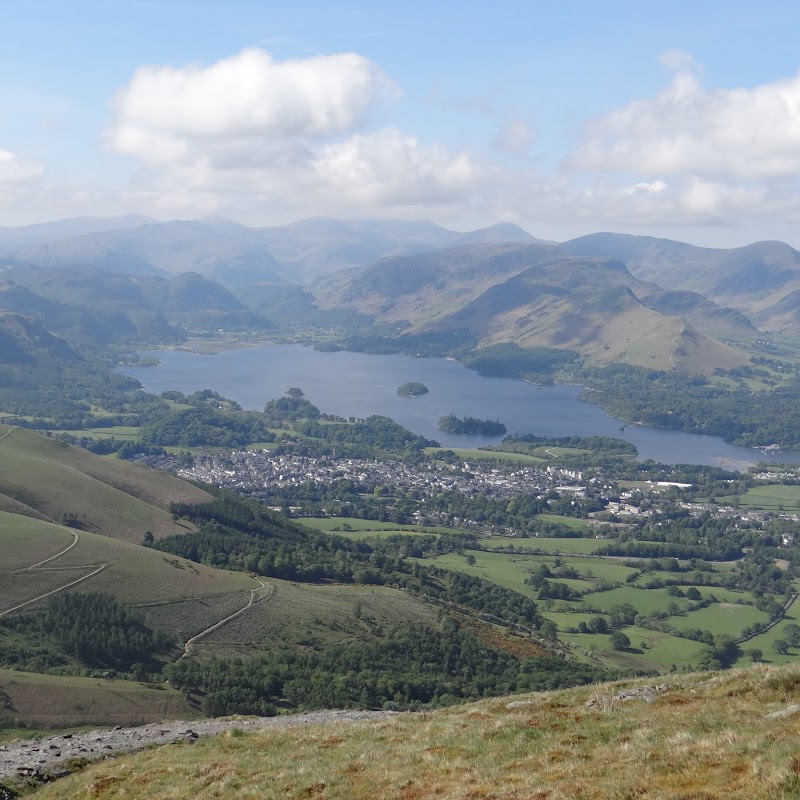 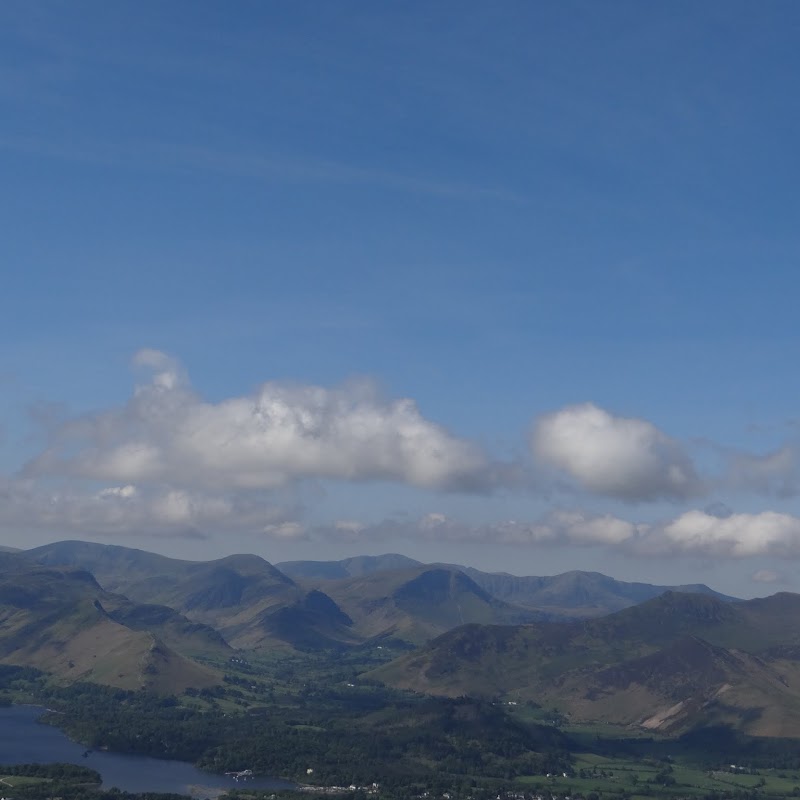 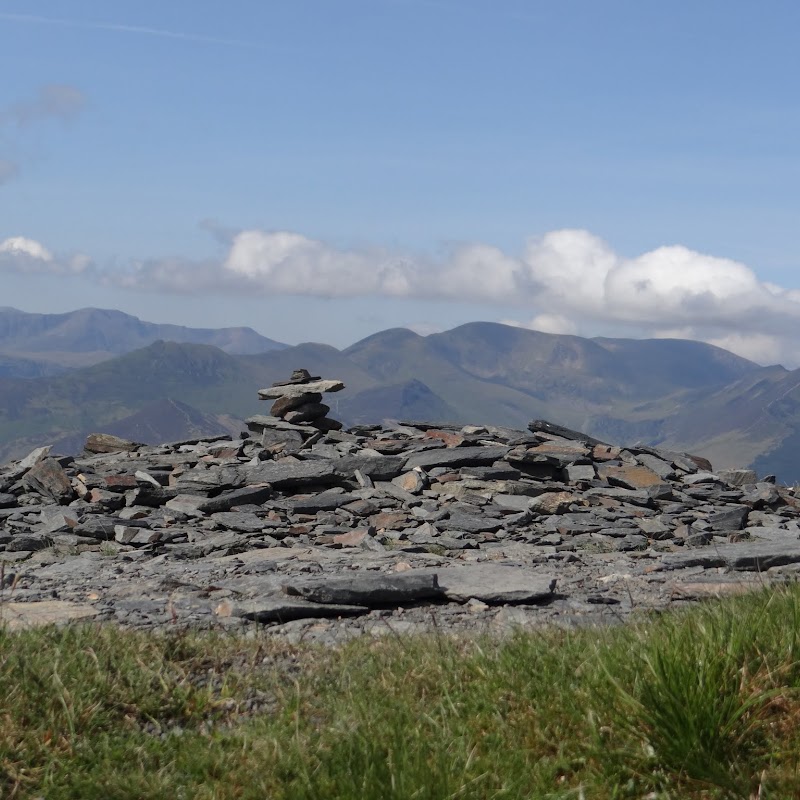 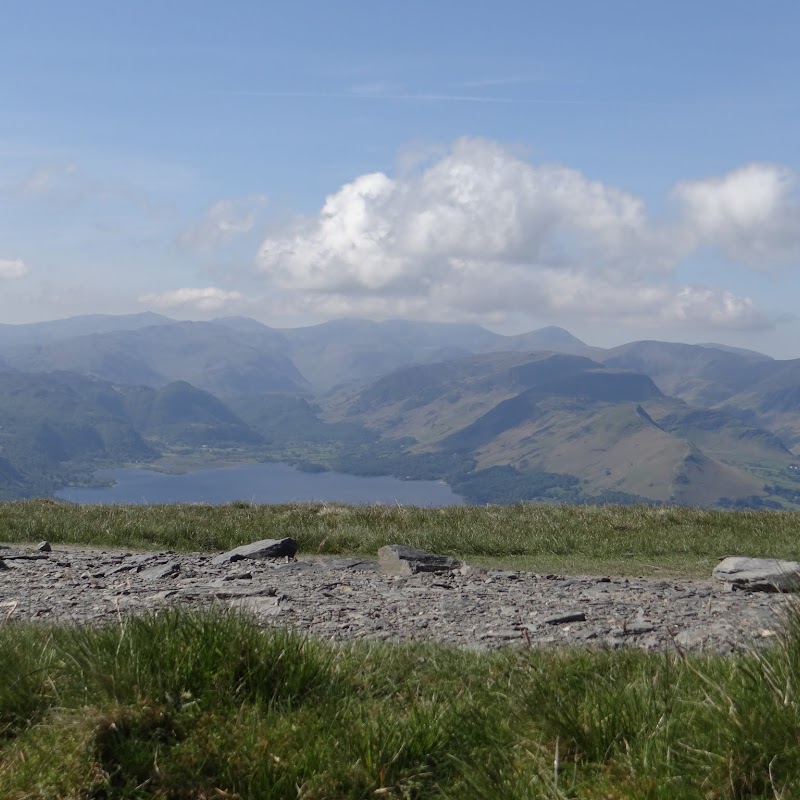 After our little rest we plodded up further until we were under the shadow of Skiddaw Little Man, at which point we decided that enough was enough, and we took a five minute breather to get our raincoats out and put them on. Not to keep the rain off, but to keep the wind out. It was getting progressively more windy.

When we eventually reached the top the wind was getting unpleasant. The view from the top is spectacular though. We did the obligatory photograph standing by the trig point and then the girls hid behind a pile of stones to get out of the wind while eating lunch and I wandered 30 yards down the scree to look for a cache. I didn’t find it and eventually retired for lunch.

After lunch I had another pop at the cache and was successful. That’s one of the highest caches I’ve ever found. 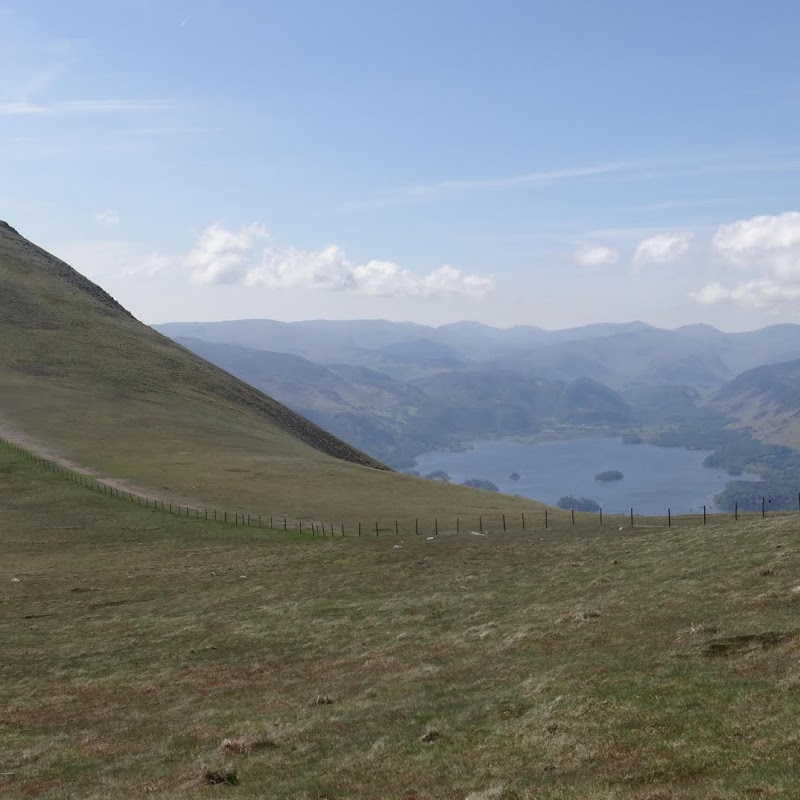 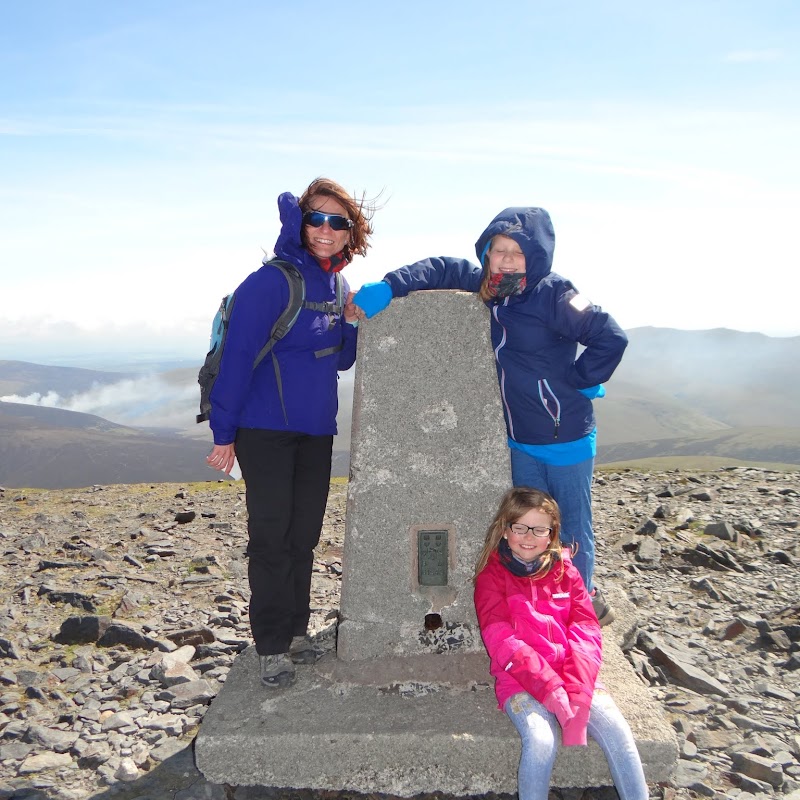 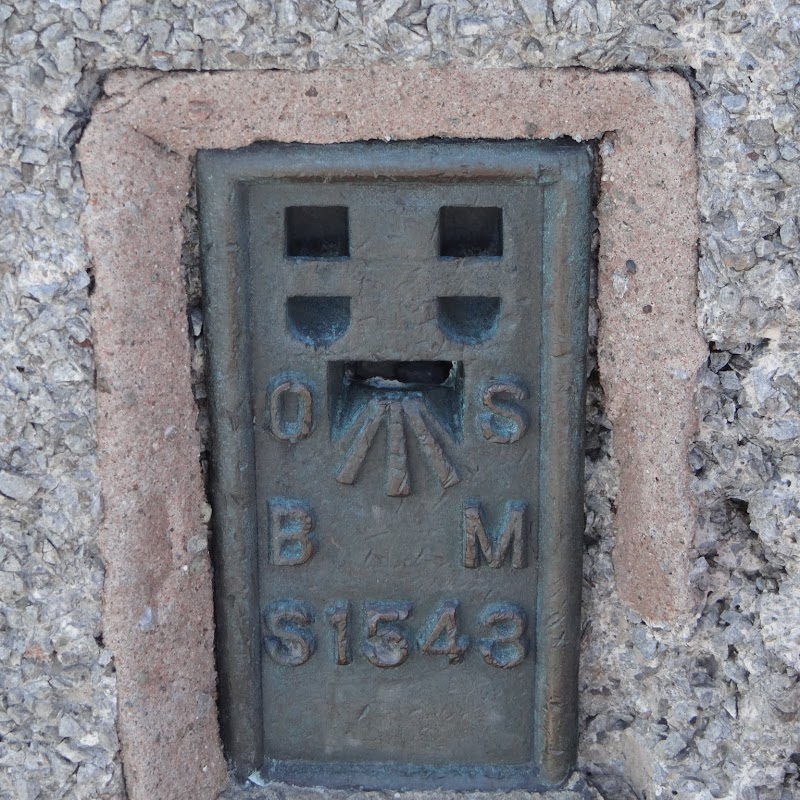 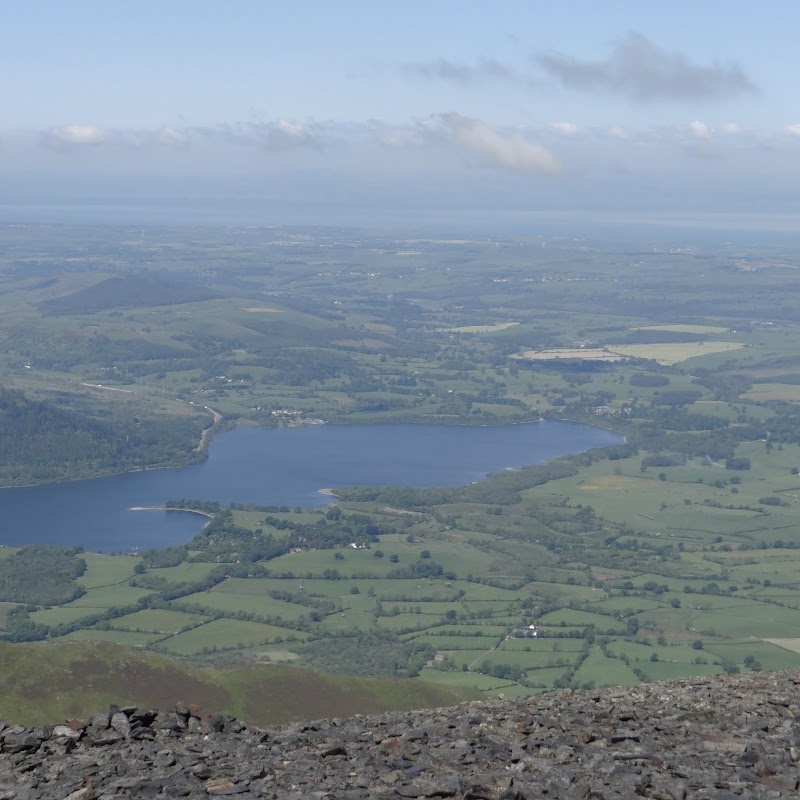 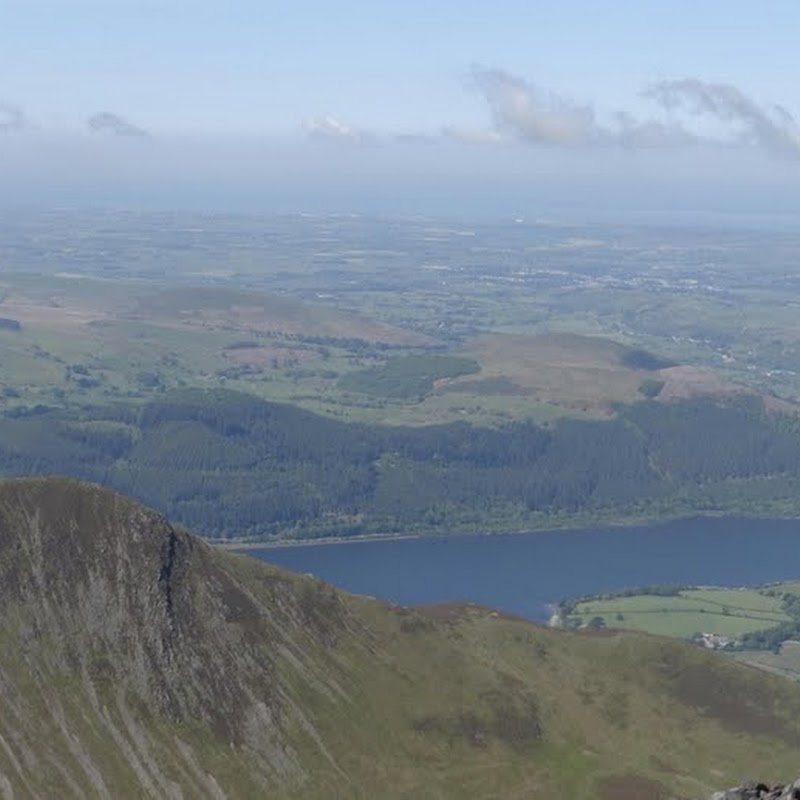 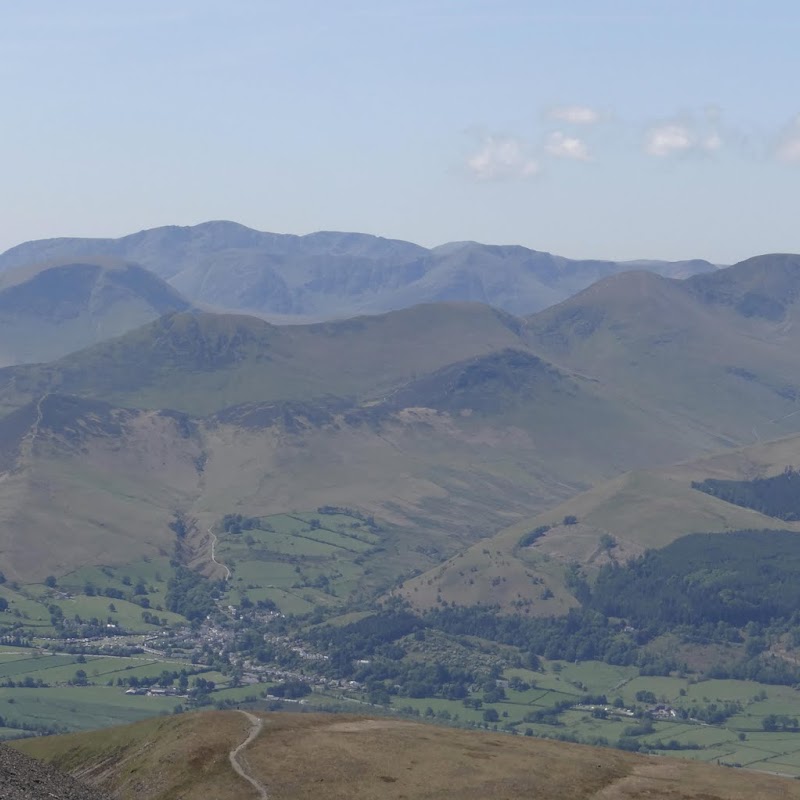 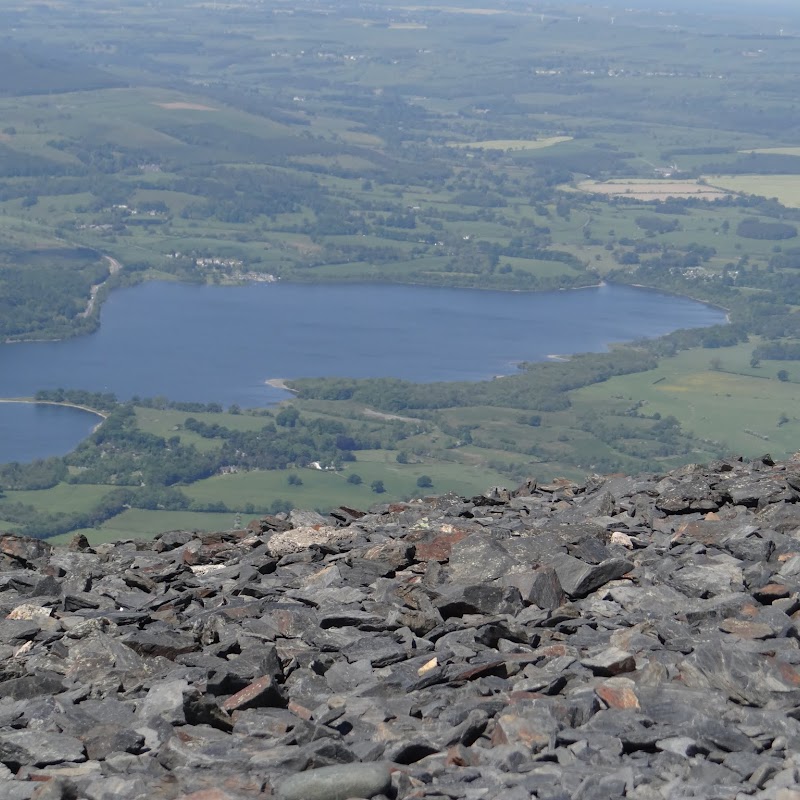 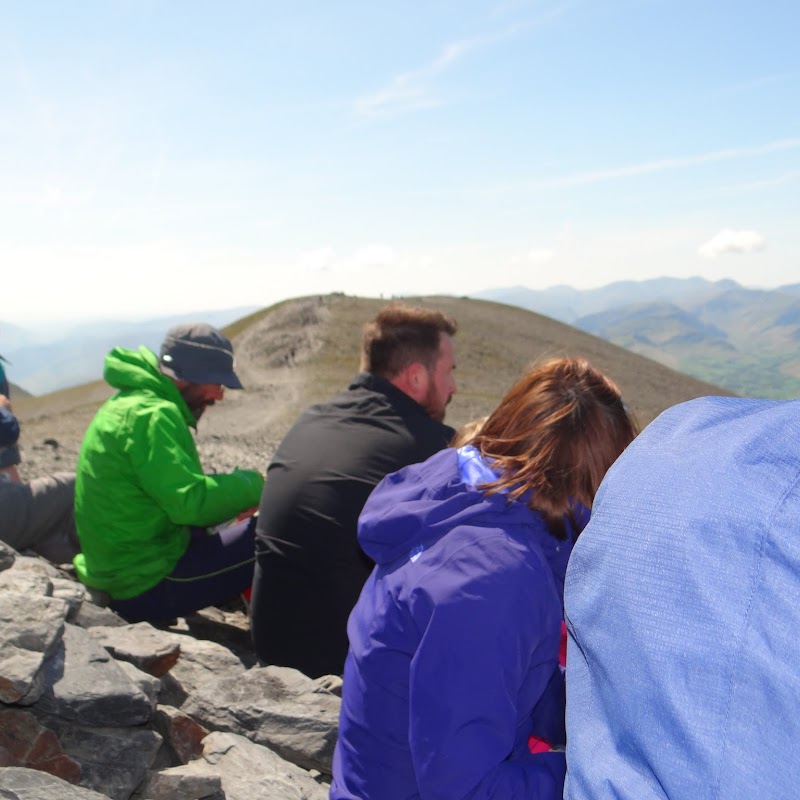 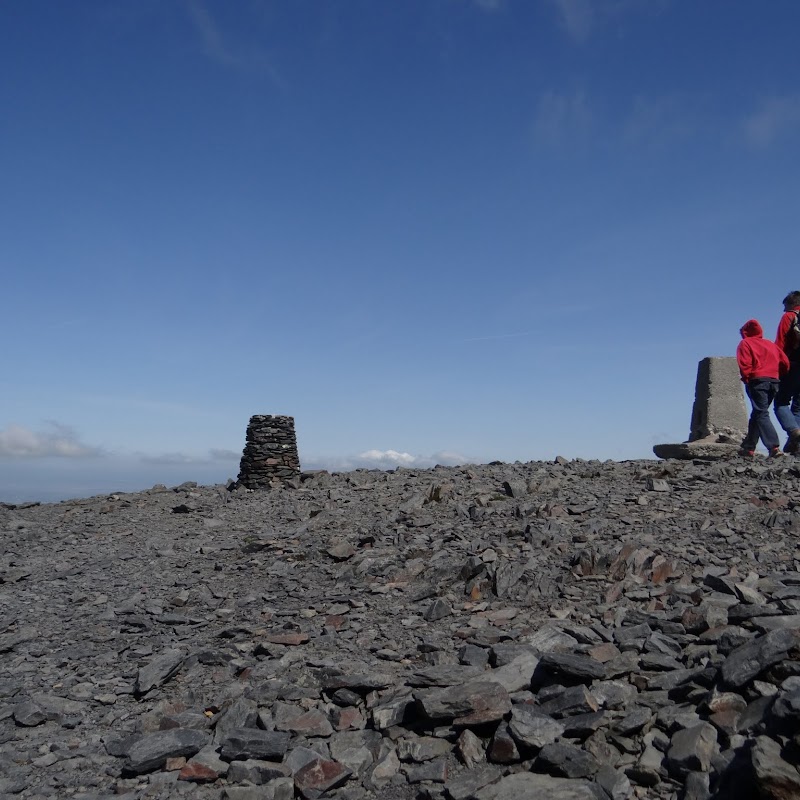 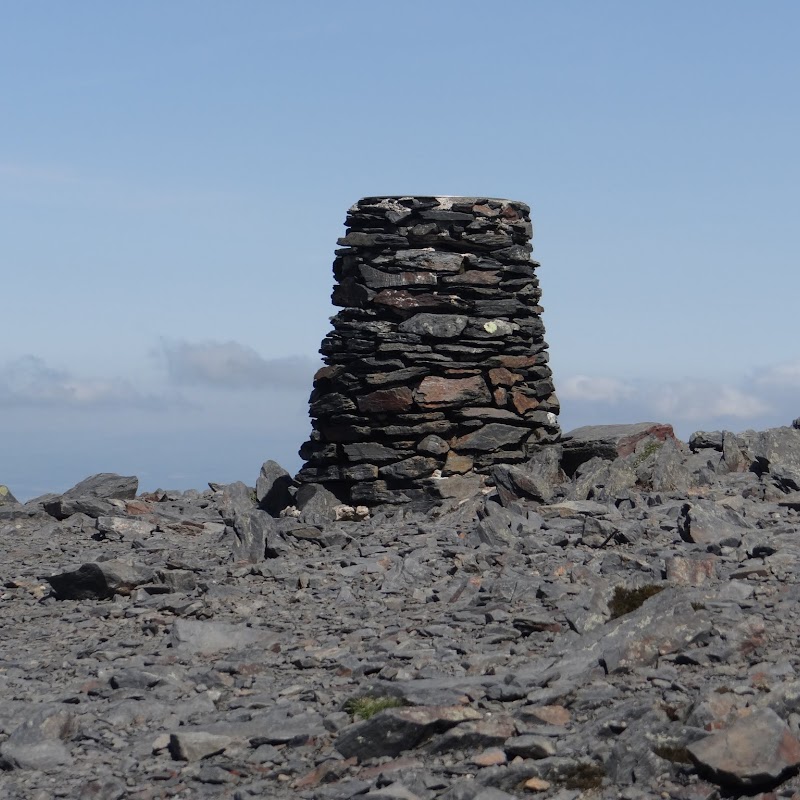 From here we decided to head back down rather than try to continue on any further, but we did so by going over the Little Man on the way. It was very windy up there. So windy that I nearly got blown off my feet. At this point, survival instinct kicked in, and we made the wise decision to get downhill as fast as we safely could. The side we were descending was taking the brunt of the rising wind, so it was a very unpleasant walk down for the first couple of hundred metres, and I made the suggestion that we walk down the grassy sides of the path rather than down the path – less likelihood of damage if someone fell over.

When we got down to the bottom, Izzy and me sat in the car for 20 minutes while Kas and Ami went for a repeat walk over to Latrigg. Ami felt upset that she hadn’t made it over there the previous day because she’d been too ill. Today was a different matter. 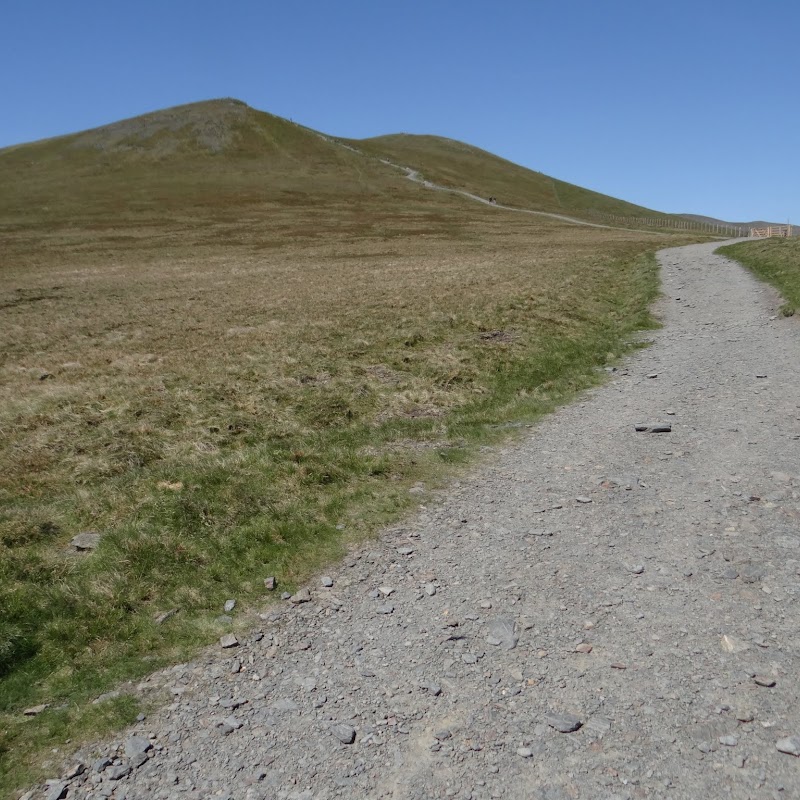 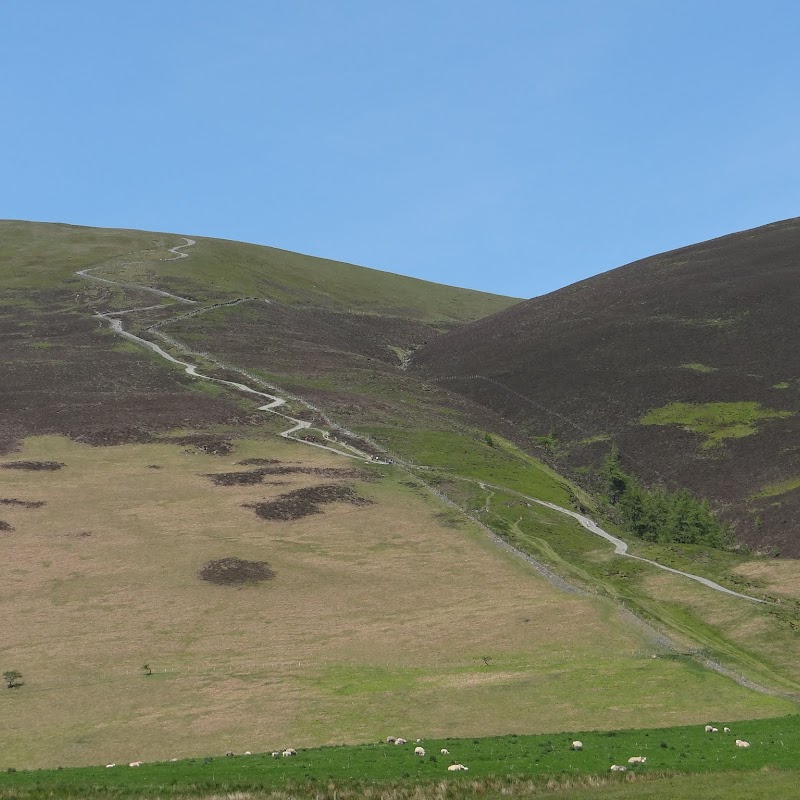 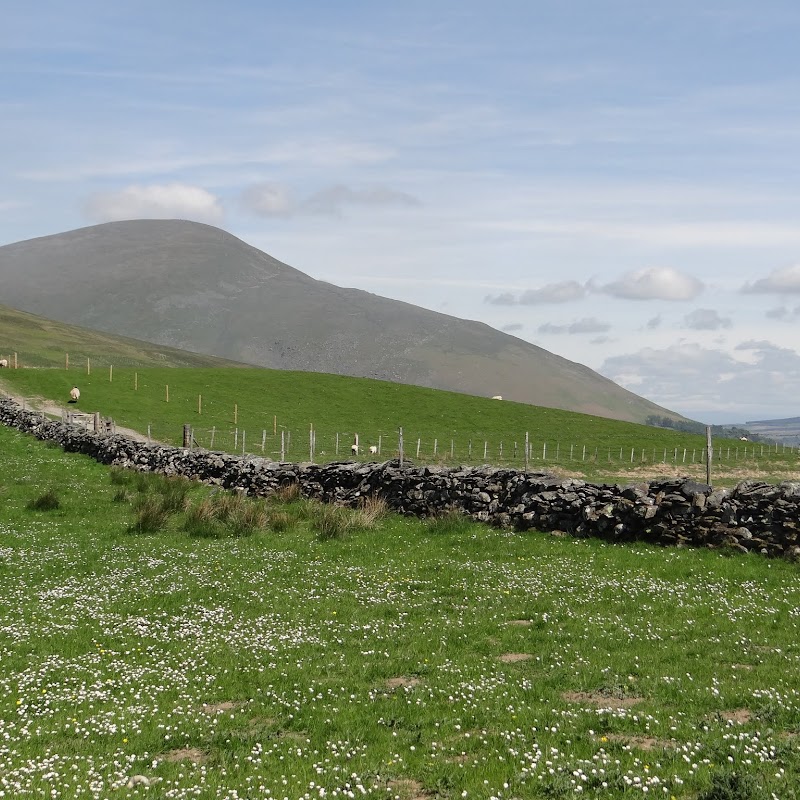 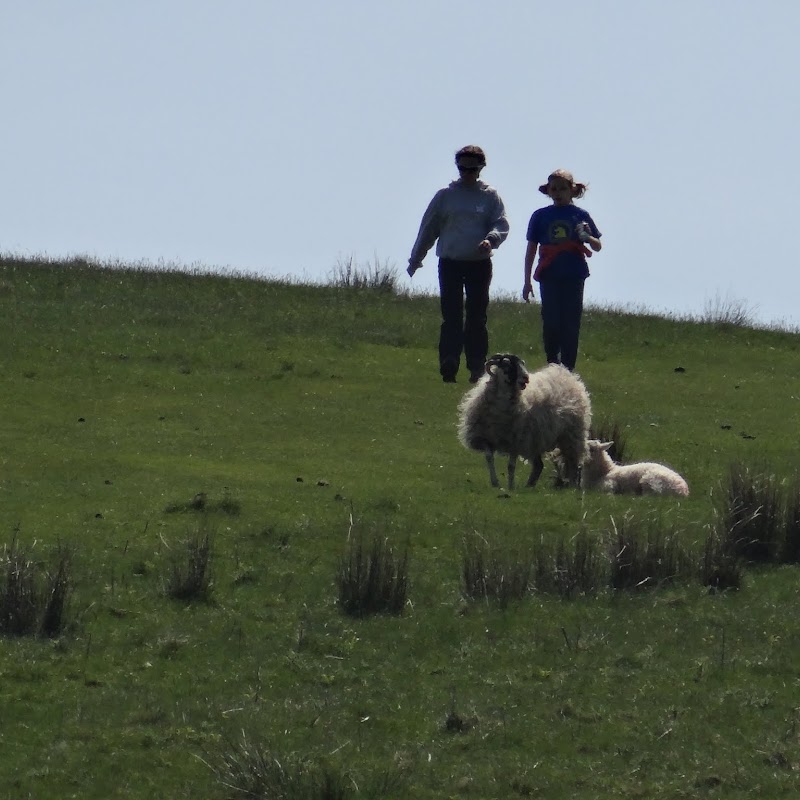 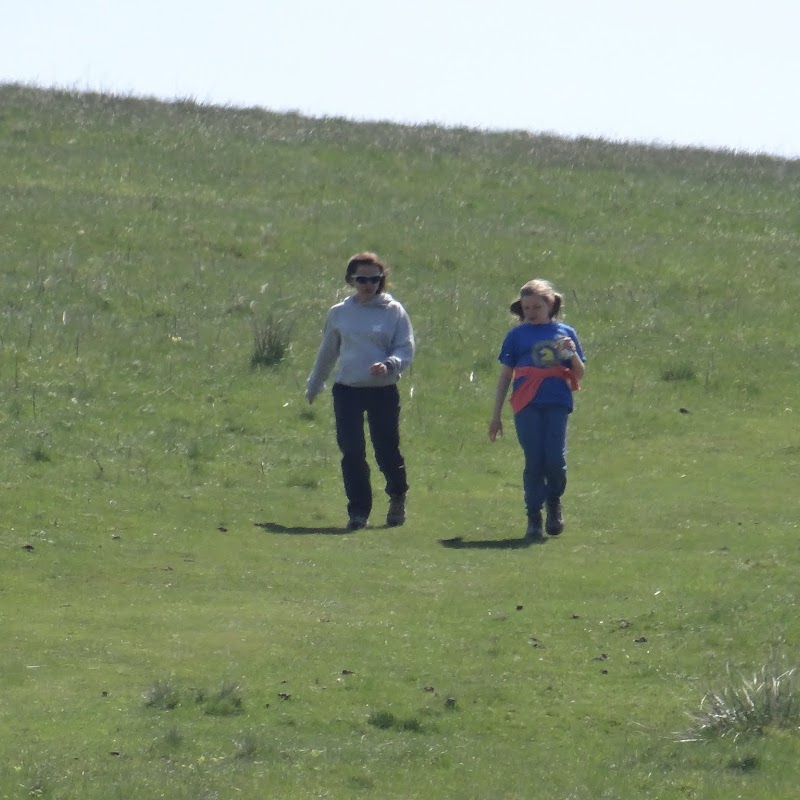 This meant we’d been out of the log cabin for 7 hours or so, and we therefore decided it was time for holiday rules to come into play. The particular rule that came into play is the one about having to have at least one ice cream every day. We obained these from the Sawmill Cafe down at the bottom of Dodd Hill. We sat outside in the sunshine getting further sunburnt and regretting our failure to apply sunblock earlier. Sunblock also works as windblock.

Post ice-cream we still had a bit of walking left in us so we did the shortest of the three trails leading into the woods from here. It was only a mile or so around, but it was quite steep and our legs were feeling it a bit after the mountain climbing exploits of earlier. At least it was out of the wind.

From here we went back home to get cleaned up and to do a bit of stone-skimming in the river again. We hadn’t made much of a plan for evening meal so we decided to go out, and taking a recommendation from a brochure in the log cabin we went to the Swinside Inn in the Newlands Valley. It was a lovely evening and we sat and ate outside, partly to enjoy the scenery and partly so the kids didn’t have to sit except for when they were actually eating. I seem to remember Ami wasn’t happy initially because she wasn’t really hungry and didn’t want to have to sit through dinner, but then ordered something quite substantial and ate it all. Must be the fresh air.

And that was more or less it for the day. We drove back home and put the kids to bed, ready for another busy day. For me and Kas there was undoubtedly some beer involved, Or wine.