After last night’s excesses we decided on a relatively relaxed day, intending to take the girls for a plodge in the sea in the afternoon.

On our previous trip to La Rochelle we didn’t make any proper trips to beaches, but now there’s two kids now instead of one and beaches provide good entertainment.

We had a fairly relaxed morning with a few bits and bobs going on but nothing much. Grandad did a fine job of looking after the daughters again until everyone else surfaced.

We went swimming in the morning too, or at least Ami and Kev did. All was quiet around the gite. Everyone else must have gone out already.

It was also time for another visit to Marche U to stock up on essentials, so Kev, Izzy, Granny and Grandad headed off in the car while Kas and Ami stayed at home to pack the swimming bags and make the picnic.

Marche U was uneventful. It was full of supermarket stuff. And this time around, we remembered to buy some small plastic bags to put food into. 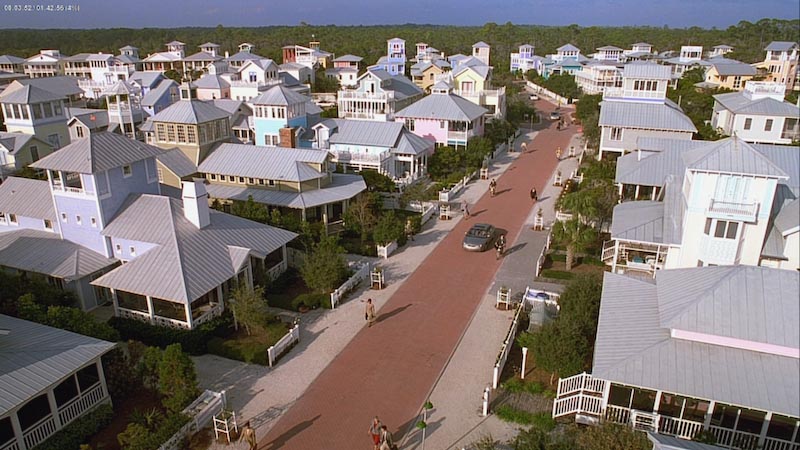 When we got back, we were pretty much ready to head off for the beach. Lunchtime was approaching so we all piled into the car and off we went. We decided to try the beach at Châtelaillon-Plage ( www.chatelaillon-plage-tourisme.com ). The guys in the “big house” last week told us it was good, so it must be worth a try.

Châtelaillon-Plage is about 10 km south of La Rochelle. It’s on the coast, funnily enough. When you pull off the motorway you get the feeling that something is a bit different. First of all it all looks very new. Secondly, it’s a different colour. I couldn’t quite put my finger on it until I realised that all the verges have grass on them instead of the normal French buff-coloured gravel-sandy mixture. The houses were all twee looking, with white or pastel painted walls and tiled rooves. Most of the rooves were red ridge tiles except for one place which had shiny bright blue tiles. The whole effect was a bit like Seahaven in the Truman Show. It should also be noted that the roads were all coated in very smooth and very clean black tarmac. The kerbs and paths were all perfectly light grey in colour with no cracks and no moss, grime or chewing gum. Compared to other villages round here it is a bit other-worldly, to say the least. 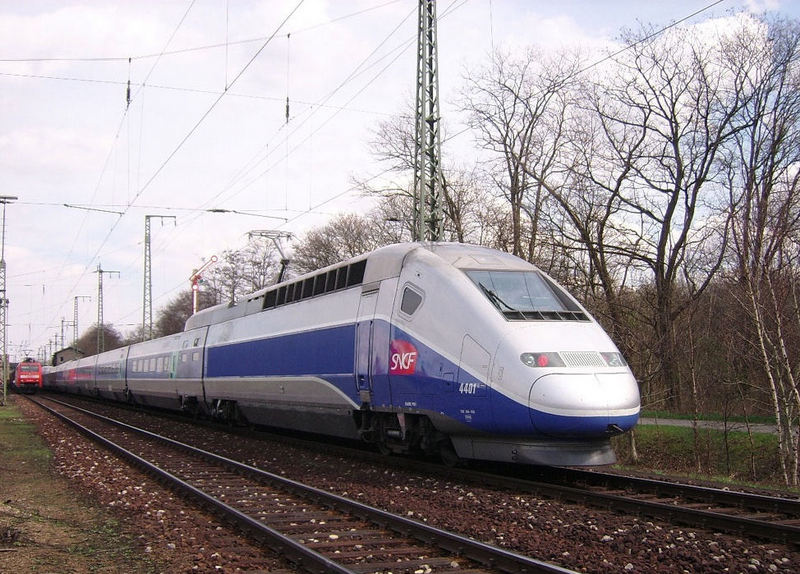 Châtelaillon-Plage also has its very own TGV ( www.tgv.co.uk ) station, presumably so you can get here quickly from other bits of France and be transported to the “other world” directly from your home without having to change trains anywhere unclean. The TGVs that stop here probably don’t stop at La Rochelle as well. By the time the train got going it would have to stop again, especially seeing as TGVs seem to be very, very long. Right next to the station is a pretty confusing roundabout, confusing because on the road in from the motorway the road is split into two lanes (with a central reservation). If you follow the signs for “Toutes Directions” you get directed into a one way system from which it is far too difficult to escape, given that this is quite a small time. The straight on lane actually takes you right to the middle of the main shopping street with immediate access to the good section of the beach, but more of that later. Where we ended up was a roundabout with a left turn for “Plage” and a right turn, also for “Plage”. Quick Kas, flip a coin………

Left (south) was the chosen route and this lead to a shopping street that had the same kind of establishments you would get on the first street back from the sea in a British resort – lots of cafes, boutique shops and amusement places. We assumed there would be parking right by the beach and turned in that direction. The Gardners good parking karma hit in straight away and we pulled straight into a spot on the sea front right next to a paystation and also right next to an entrance through the sea wall onto the beach. As we were pulling up, Kev caught sight of some familiar faces out of the corner of his eye. It turned out to be Simon, Rachel, Edward and Lucy from round the corner. To be honest, it would have been difficult to miss them. Evidently the French don’t take a picnic to eat on the beach, they retire from the sand into a cafe. So there was a massive beach with pretty much no one on it.

We set up our base camp at a polite distance away from anyone else and prepared for some lunch. The beach itself maintains the Seahaven image. Unlike the beach we went to on Ré, this one is covered only in lovely, evenly graded yellow sand. No stones, no rocks, no litter, no seaweed, and definitely no turds. It gives you the impression that this is where Alpine piste-bashers come on holiday. In fact, it’s pretty obvious that some kind of device like this is used on here every night. It seems likely that the beach is not natural at all. It was probably put over the top of what used to be here, or at the very least it has been raised up a bit. The giveaway is the fact that the sea wall looks like it has never been wet. The sand is piled up a long way above the high tide mark. The beach also has a few change huts for rent and some bronzed looking guys sweeping sand off the deck boards outside them.

Lunch consisted of sand sandwiches, sand flavoured crisps and a bottle of diet sand, sorry, diet coke. How does it manage to get in there so quickly ? I’m absolutely sure I didn’t drop my first sandwich into the sand, or even onto the towel, but somehow it was crunchier than it should have been.

After lunch it was time to go check out the sea. This is the one thing that is a let down on this beach. The water picks up a lot of sand off the ground so whilst the water is wonderfully warm it also takes the top layer of skin off. You wouldn’t want to trip up and fall over in there anyway. By this time Edward and Lucy had finished lunch as well, so it was swimming gear on for everyone and off down to the water’s edge. Kev took Ami and Izzy for a while so Kas could have a mini snooze and Granny & Grandad went for a walk in search of a bucket and spade. This was the one item we forgot to pack. I guess we’ll have yet another set in the garage when we get home. It proved to be a much longer walk than they were expecting. They initially headed off down the road right by the sea, which took them away from the town centre down a road containing no shops at all. 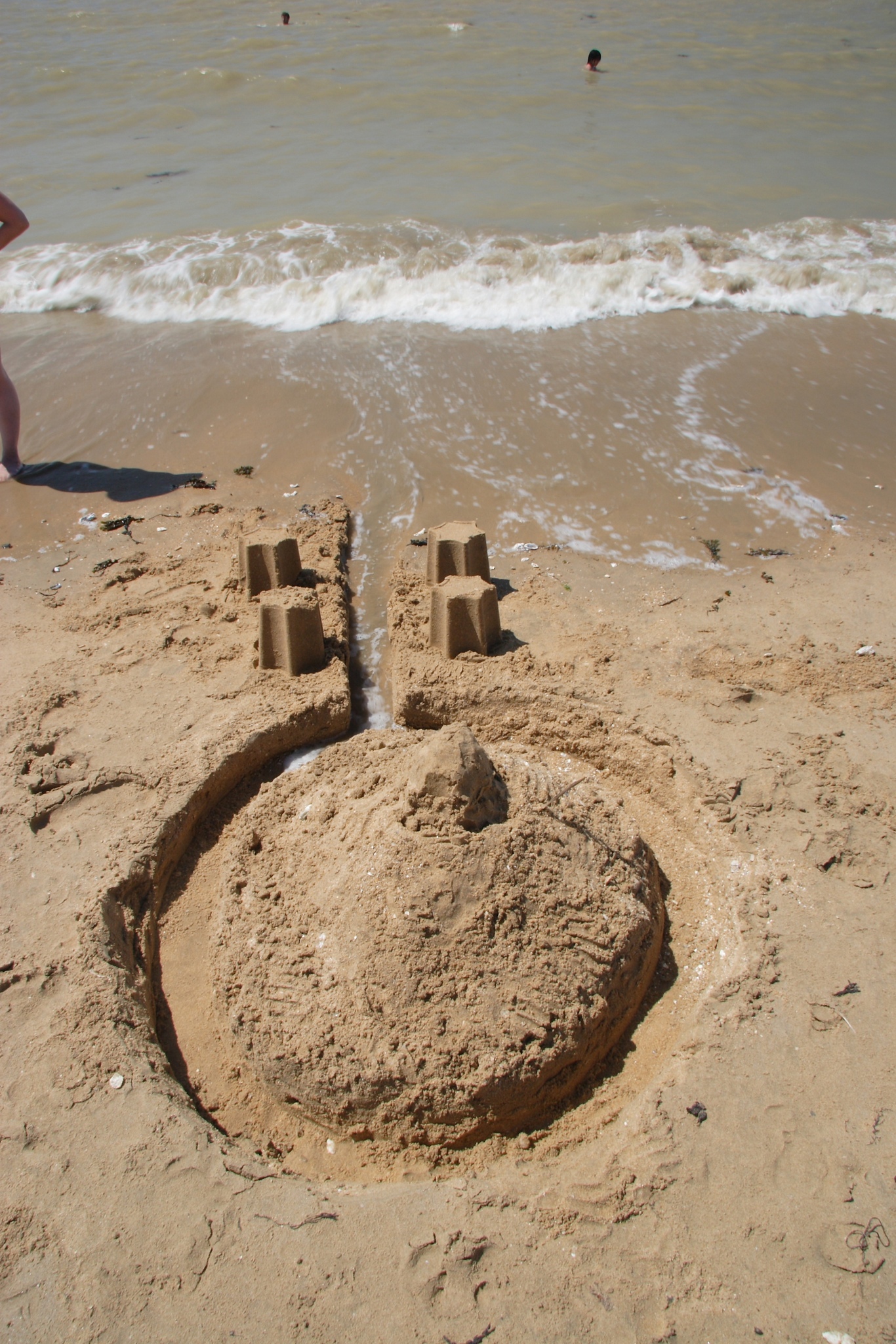 While they were away, we entertained ourselves by plodging in the sea (up to around bum height) and generally splashing around with Edward and Lucy. We passed on the rubber dingy though. Not really safe for Ami as her swimming isn’t really strong enough. We had forgotten swim nappies for Izzy as well, which meant if she fell over in the sea her nappy would suck up enough water to compensate for the melting of the polar ice caps. Swimming nappies are just nappies that aren’t very good at absorbing water. They just stop it from escaping round the sides, as it were.

Granny and Grandad’s eventual return several hours later was the prompt for us to begin the great English seaside tradition of building a sandcastle. An Englishman’s home is his castle, and an Englishman’s castle therefore has to be a good one. There’s national pride to think of, you know. Building sandcastles is a serious business and I’m sure if it was an Olympic sport then team GB would win every time. The art of a good sandcastle is obviously in the selection of location to give optimal timing. What you have to do is to pick a spot that is sufficiently high above the incoming tide that you can finish just before the tide arrives, so you complete the engineering work just before the tide starts to wash up into you moat. Too close to the sea and you don’t get to finish. Too far from the sea and the kids get bored waiting for the inevitable. If you go too far up the beach then your castle will survive the tide, which just isn’t the done thing, don’tcha know….

Edward and Lucy seemed to have a different idea. They had long since retired to the back of the beach and had seemingly decided that France was rubbish, so they were going to dig a tunnel through to Australia. It sure was a big hole they were digging. Severe likelihood that the piste basher would be lost forever.

It got close to the time when our parking was due to run out, but someone mentioned the possibility of ice cream, and that was that. Time to find more loose change for parking and walk further up the beach to the yellow and white hut. We emerged with a collection of magnums in differing colours and an ice lolly for Izzy. Most of us managed to eat our ice creams without any sand. Most, but not all. All of this consumption seemed to switch everyone into snoozy mode, so we all went for a lie down on the towels. Except for Ami, that is. Ami decided that Kas would really love to have a tan line on her back that was the shape of a five-year old. Don’t know how could stand having Ami on her back, but both of them seemed pretty happy. 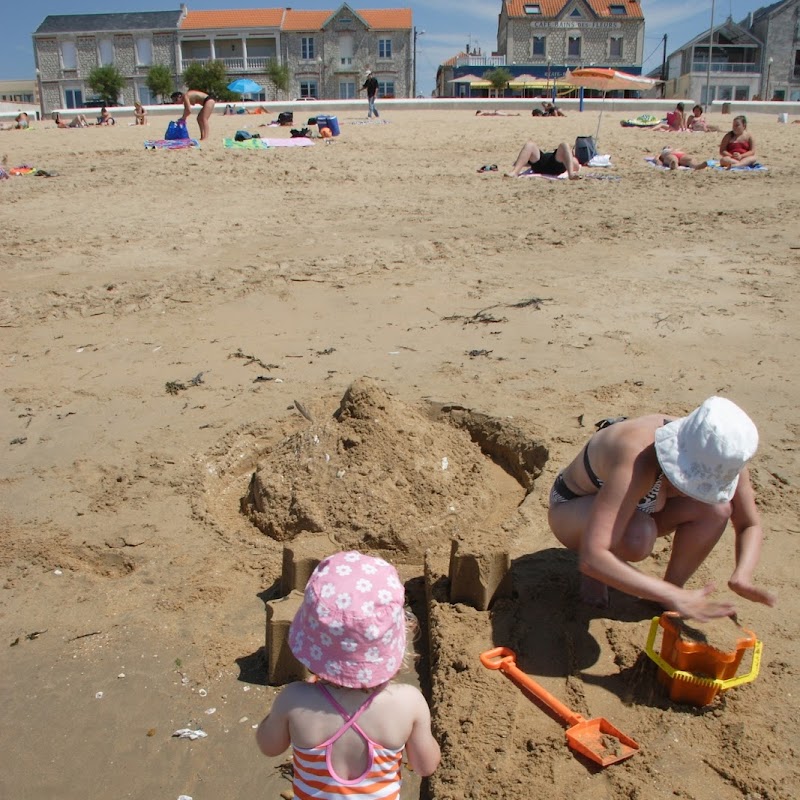 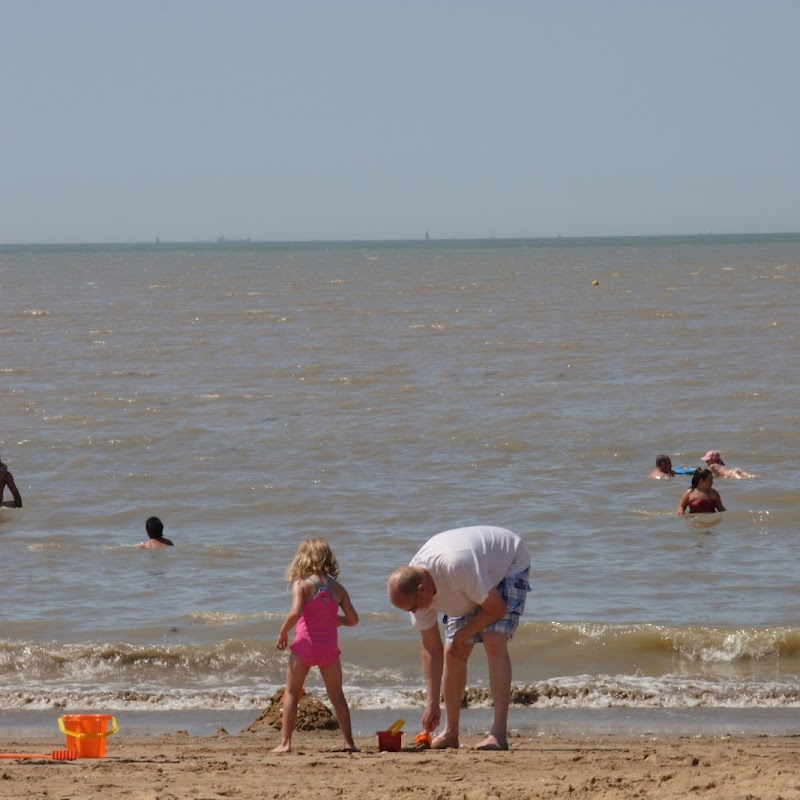 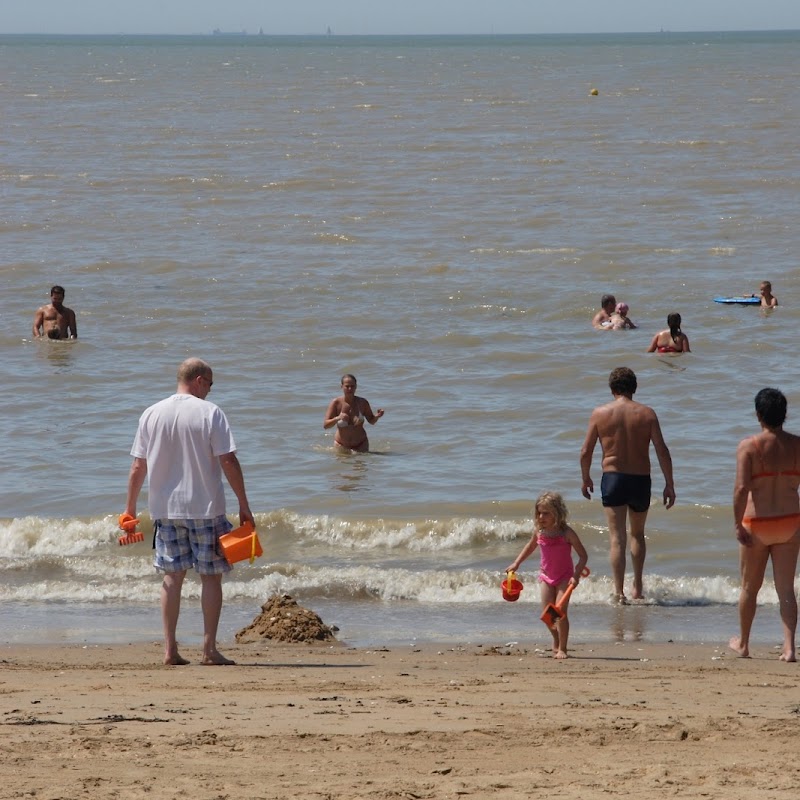 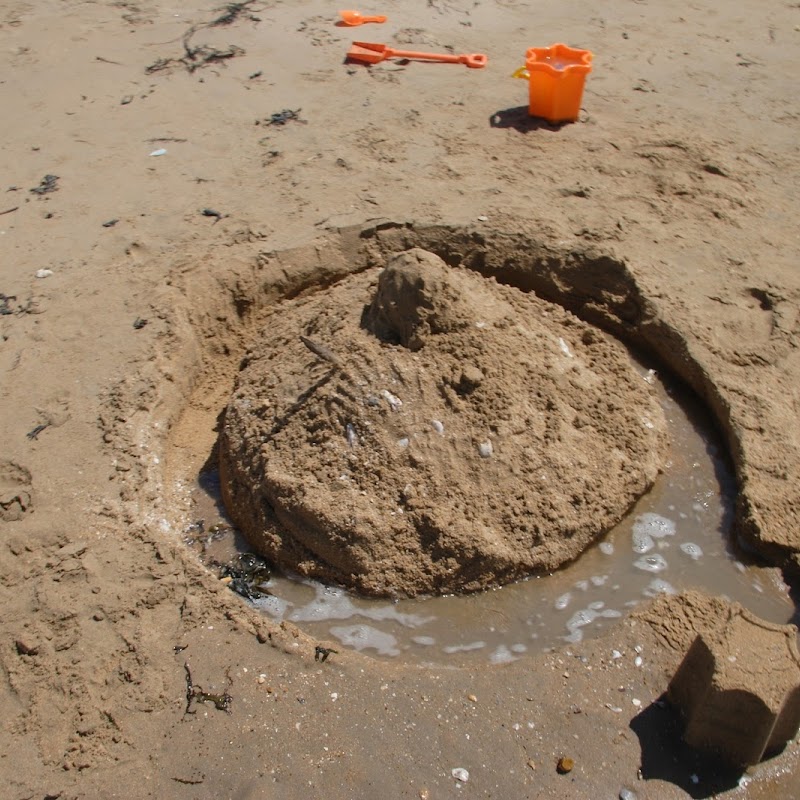 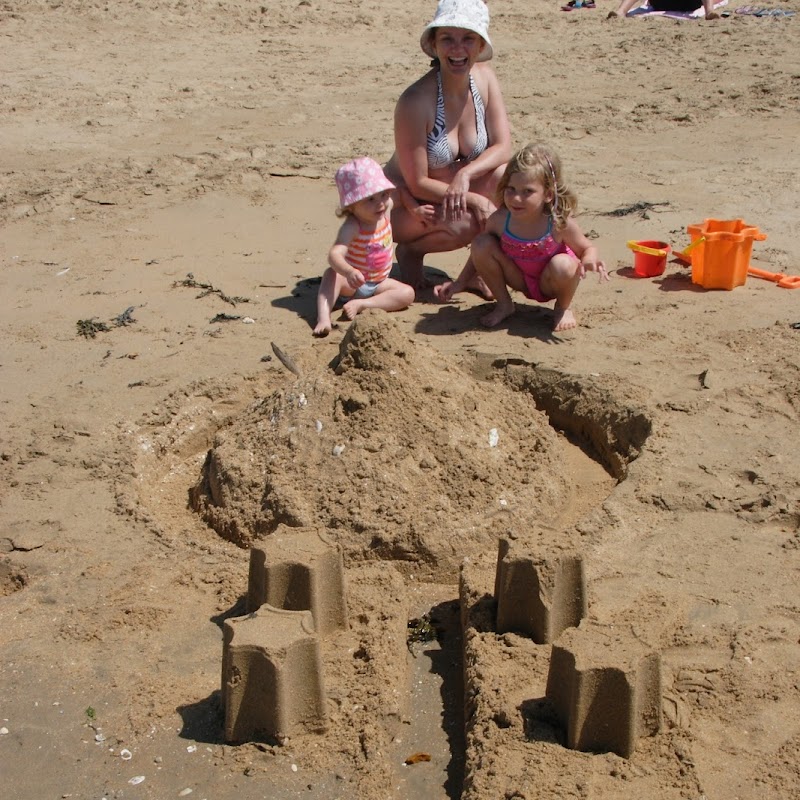 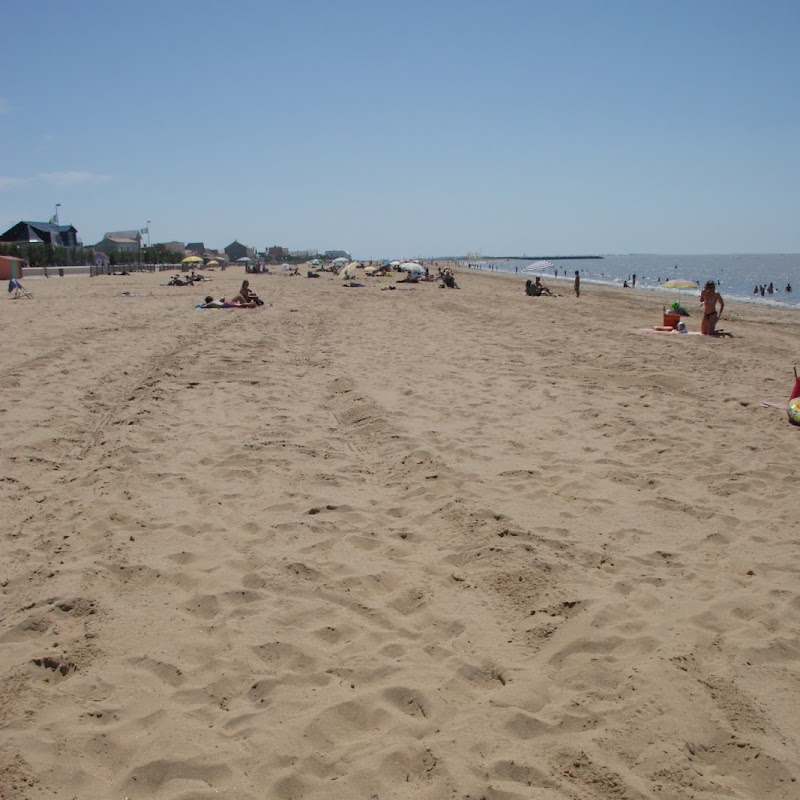