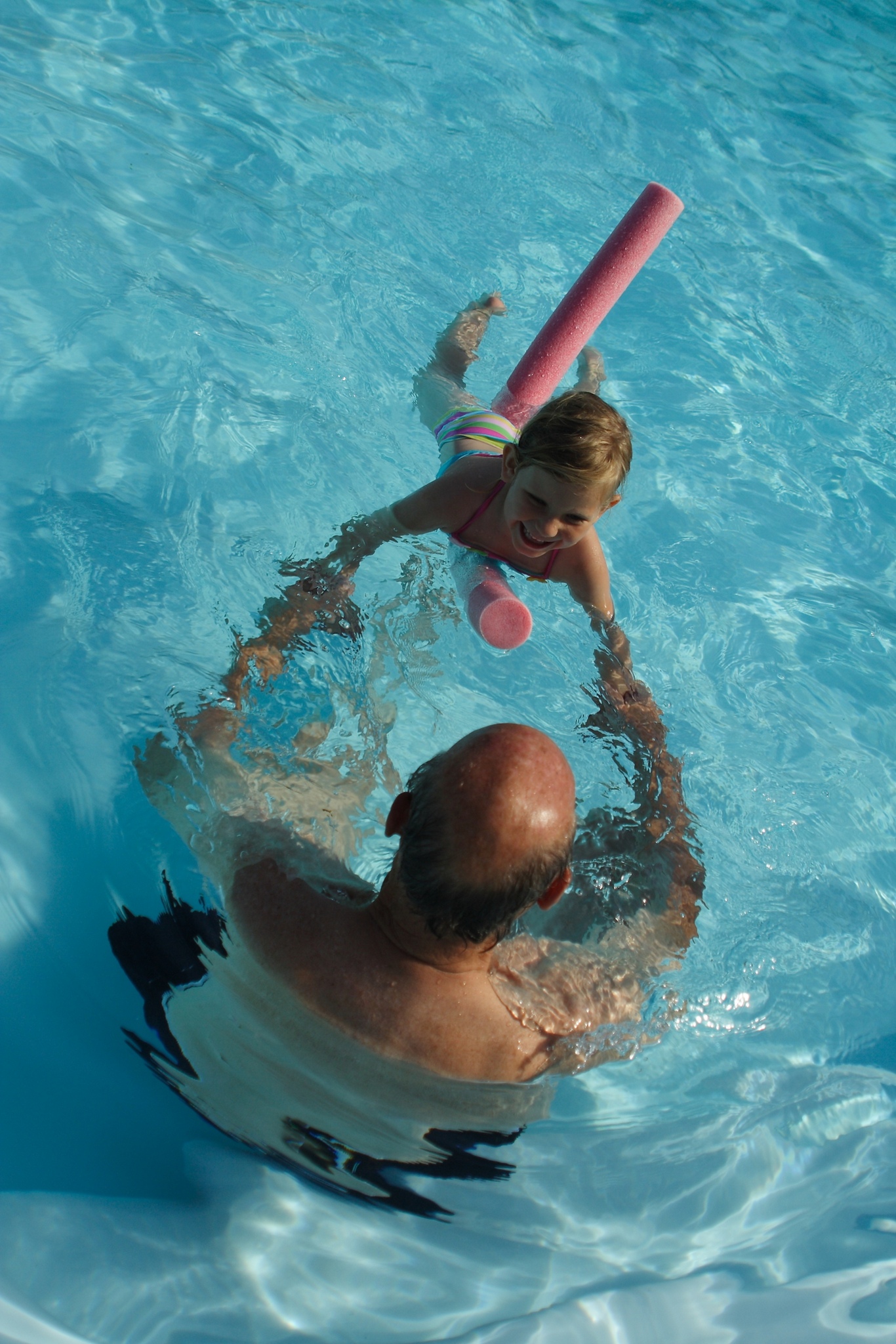 And when we say “chilling”, we mean freezing. Not because the weather was cold, but because we spent all day in and out of the swimming pool with our new found water-baby Ami. As a special treat after swimming unaided for the first time yesterday, we promised Ami she could go in and out of the pool as many times as she liked. This proved to be five times. Two in the morning, two in the afternoon and one in the evening. It would have been more, but we had to allow time for eating and the occasional mini-strop.

The morning also provided entertainment in the form of a spot of DIY. Not first choice for a holiday, but then we discovered that Kev’s (failed) efforts the previous night to get one of the washing machines working had resulted in no washing machine and now no dishwasher either. Something to do with the fact that the dishwasher water supply was fed from a tap in the bathroom of the other apartment, and the washing machine in that other apartment had neither a water feed nor a power feed, which nicely compensated for the fact that the drain hose was just lying on the floor instead of being stuffed down the waste pipe. Good job there’s another washing machine in the other bathroom. The reason why the dishwasher wasn’t working, by the way, was that in the process of trying to move the washing machine so that the drain hose wasn’t pressing on the feed hose it got knocked and the feed hose started leaking at the tap, so the tap got turned off. Eventually fixed it, but it’s rather a strange thing to be doing whilst on holiday. 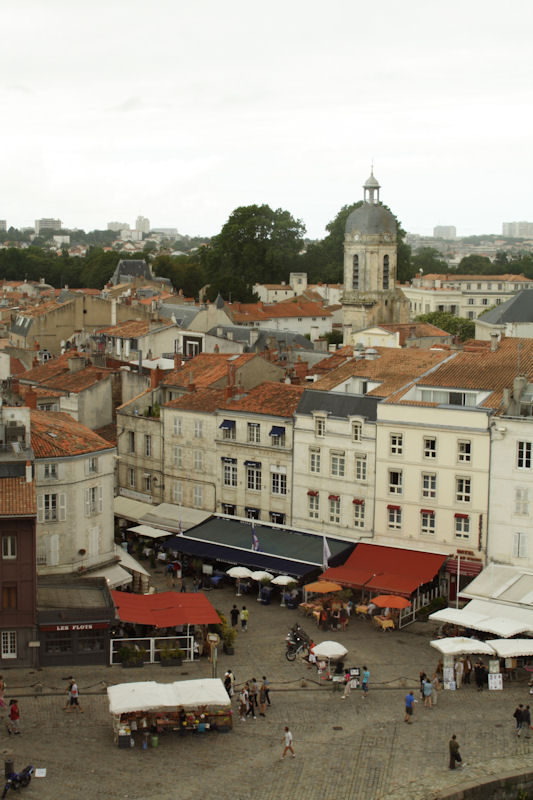 In all this time, Izzy didn’t go in the pool at all, except first thing when she dipped in her toes and then decided she “no like it, water” Granddad also bloused halfway through the morning’s first session leaving Kev to freeze alone. Somehow, Ami didn’t seem to notice the cold, maybe because she was thrashing away like a mad thing, whereas we were getting cold because the first time your child has their floats off you suddenly need to stay very close, and you don’t actually do much swimming yourself.

Izzy dropped off for a good old snooze just around lunchtime, at which point Kev cunningly volunteered to watch her in bed, thereby forcing Kas to get up and spend time in the pool with Ami. Sneaky, I know, but how else was I to escape ?

Anyway, Kev took more baby sleep than Izzy by a long chalk and surfaced right around time for feeding the girls.

In the evening, the family split up and experienced several different domestic disasters.

Granny and Granddad stayed at home with the girls and they managed to cause Ami’s bed frame to collapse simply by sitting on it. I think it was going to go anyway – all the fastenings were loose and the screws holding the slats on weren’t anything like long enough. The ones that came loose were rusty and bent as well. Probably never been right, but anyway, net result was that Ami had a switch of bed frames while Izzy merrily snoozed away on her mattress on the floor.
Cours des Dames 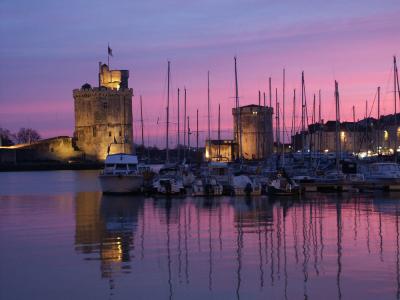 Meanwhile, Kas and Kev took the welcome opportunity for a night out. The food was fine, but every other aspect was dodgy. Firstly, the N11 leading into La Rochelle was being resurfaced, so we got diverted down a previously unseen part of La Rochelle. This threw off our cunning plans and put us, as with the previous trip, in a place we didn’t want to be, namely approaching the town centre from the north. We eventually meandered our way into a car park near the Tour de la Chaine. Next, after we found a restaurant, the first act of the waitress was to drop a bottle of Pepsi off her tray, which flew into Kev’s lap and then bounced onto the floor. Kev therefore spent the rest of the night with an embarrassing damp patch near his crotch. At least he came off better than the guy sitting opposite, who ended up with a big bleeding scratch down his shin where a bit of bouncing glass embedded itself. This was at one of the many cafes alongside the Vieux Port, by the way.

We then discovered that the little camera doesn’t take landscape photos in the dark. The images look OK on the screen, but you then get an image that looks rather different, more like something from The Sky at Night. Oh well, remember next time that nighttime photography requires the proper cameras. The photo of the Vieux Port here has therefore been nicked from elsewhere. However, the flash is sufficient to do portraits, so the photo of the guy with the silver face is one of ours.

Some small entertainment was provided at the Cafe Leffe when Kev asked for the beer menu and was told by the waiter that he was the beer menu, and who then proceeded to give a much practiced recital of beers of various colours. Thankfully, one of them was Leffe Brune – I’ll have one of those please, ‘Guv. 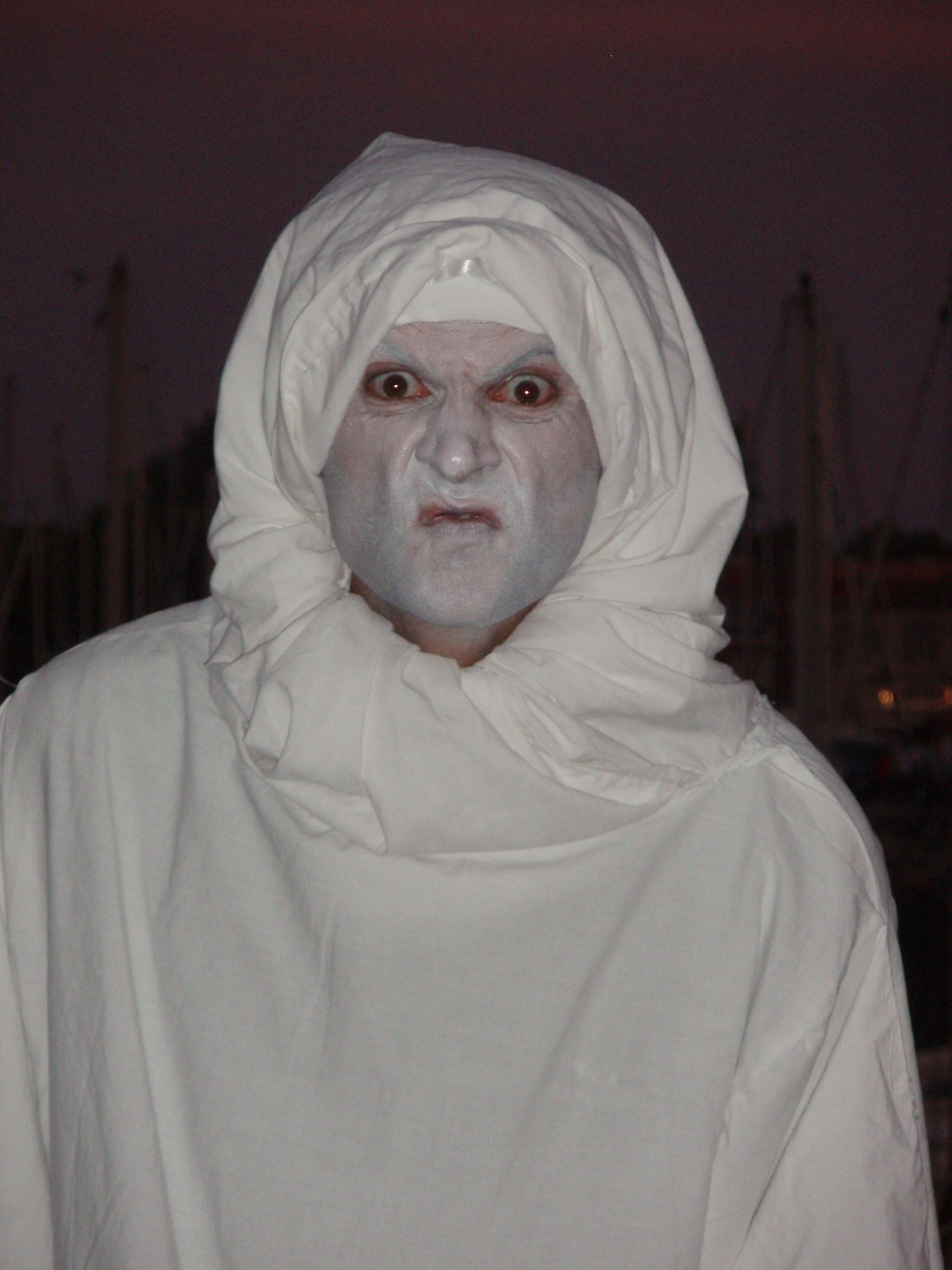 And then, to the trip home. It was probably the most entertaining trip you could imagine, given that the objective was to drive no more than 10 miles straight out of town down the major road. Firstly our sub-optimal starting point meant that following the “Toutes Directions” signs took us totally the wrong way and all the way back to the Ile de Re bridge. Next, we got to the N11 junction to discover it was shut ( see comments about resurfacing earlier ). The diversion ( I do think the French “deviation” sounds better ) took us one junction down, then round the roundabout and back to the N11 junction from the south side. We were allowed to follow the slip road but not join the main carriageway, so we ended up being diverted straight off again and into the Beaulieu Retail Park, at which point, all diversion signs vanished from view and we were left to fend for ourselves. Not being locals, we had no idea. So Kas opted to follow someone else for a bit, trusting that they a) had seen a sign we hadn’t and b) were following the diversion instead of going home to some other place. Doh ! Wrong.

So we got a lovely tour of Puilboreau and St Xandre (see Day 1 article) before eventually spotting a sign for Dompierre sur Mer. This took us south again over the N11 and allowed us at least to join about 5 miles further down and vaguely on the right route. It also had the advantage that we passed the Marche U, thereby locating a recommended shopping location.

Eventually, when we got home, we discovered all were asleep except for a creature in our bedroom which looked like a wasp but was actually the size of a horse. It took several splats and much messing around with light switches before eventually managing to dispose of the thing. I think we recycled it, trapped inside its bog roll coffin. And so eventually to bed after after a day which teaches you that you should never have a quiet day in whilst on holiday, because this just exposes all the bad things about your accommodation.