We were away from the holiday house by 9:20, having suitably disposed of anything edible that remained in the fridge. We had a fairly long way to go and, of course, this time we didn’t have the luxury of a night in a hotel midway, so we were committed to getting all the way to Calais by early evening and then all the way home. 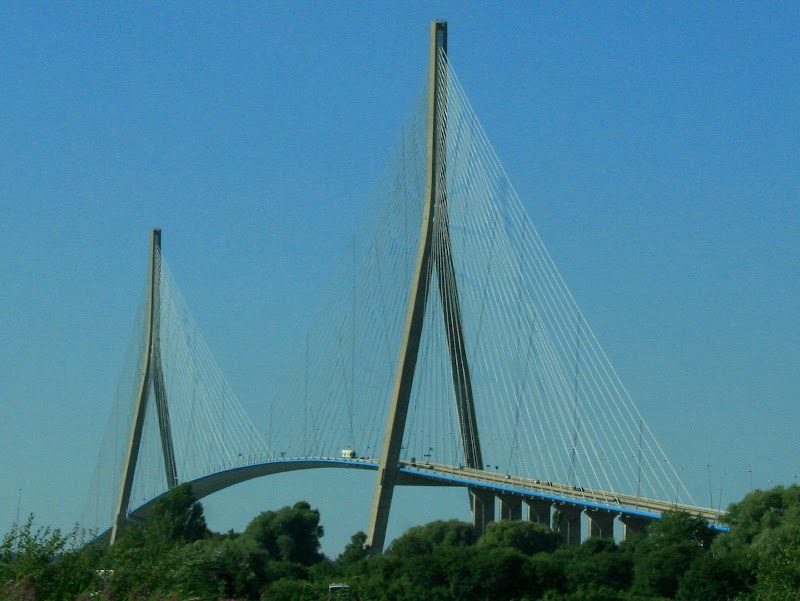 Thankfully the roads weren’t too bad and after a couple of hours we found ourselves all the way over at Caen, where we stopped for some lunch at some motorway services.

We then continued on over the rather impressive Pont de Normandie. We found a bit more traffic around here, but it was mid-afternoon on a Saturday in August, and there were quite a lot of North Europeans and Brits attempting to get out of France.

We needed another stop to change drivers, stretch our legs and rotate our bicycles, so we chose the fairly uninspiring services at Bosc-Mesnil just north of Rouen. Having stayed in Rouen on the way down we were fairly familiar with the amount of time it was likely to take us to get up to the Channel Tunnel so we didn’t hang around for long. Just long enough for the kids to stop climbing the walls and for us to have a bit of a rest from being cooped up in the car.

From there we managed to get to Calais and through the tunnel without any fuss at all. We continued on to Maidstone Services where we stopped for a motorway dinner before finishing off the journey in the gathering darkness.