Today we decided to go to Mont St Michel, so we got up at some ungodly hour and jumped into the bus for the 45 minute drive over. It proved to be an interesting day. 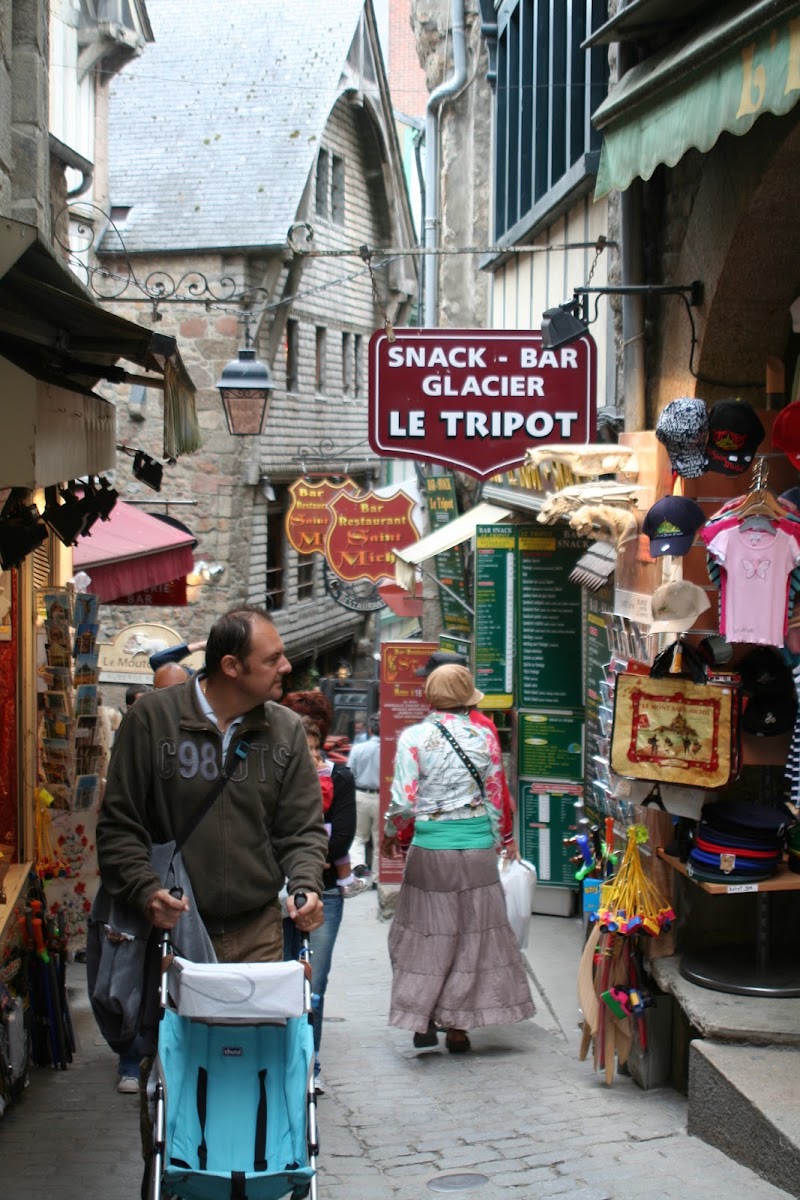 Back at the plot, Mont St Michel is France’s second most popular tourist destination. Don’t know what the first is – either Eurodisney or the Eiffel Tower, probably (being very stereotypical). Anyway, I think all of the 500,000 annual visitors went on this day. Progress around the streets was painfully slow, probably because the streets are narrow and made narrower by all the tat vendors. It took fully 45 minutes to get to the foot of the abbey, at which point the three of us (Kas, Kev and Ami) decided to avoid the queue of thousands trying to get in, and instead to try to find a geocache. We had long since left Grandad, Granny and Izzy behind. All of them were struggling with the crowds and the hills and they decided to retire for a coffee even though we’d only been inside for 10 minutes. On reflection, I would rather have stopped for a coffee than walk up to the top and back. Imagine walking through a football crowd up a steep hill, but they’re not football supporters, their all old age tourists intent on standing in queues and gawping at tat. I do not include my own parents in that description, by the way. By comparison to that bunch, my parents are extremely quick, nimble and not at all interested in souvenirs.  If my schoolboy French is right, “souvenir” means something like “beneath coming”. It would have to be a long way down to be beneath coming here.

OK, call me misery guts. If you can catch a day outside the summer holidays so you can actually see the cobbled streets and spend less time in queues then it is probably fantastic. It also has the advantage of being free to get in. 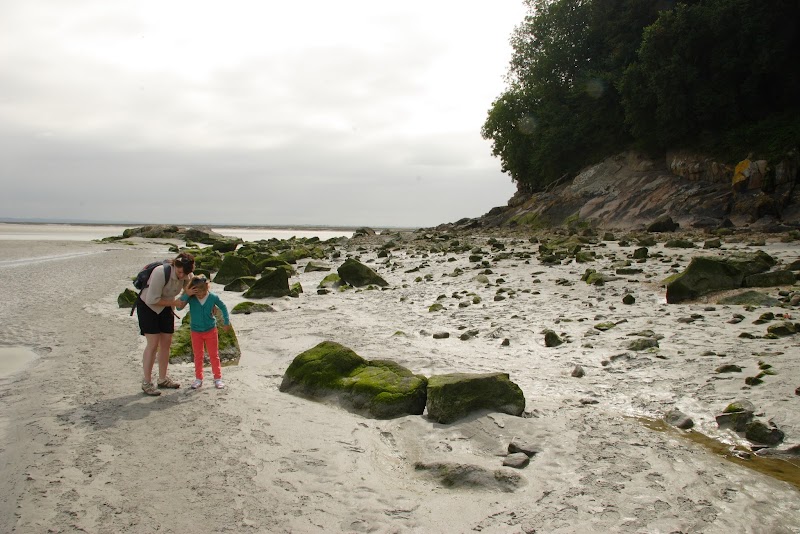 There’s only one cache on Mont St Michel. It is called In The Marvel’s Shadow. As with the whole of the island, it is very regularly visited. Four people had visited the day before. The cache is shown on the north side of the island and it turned out the only way there was to walk around the outside on the silt. It’s highly likely, therefore, that you can only get to it at low tide. The GPS found the spot fairly easily but the description indicated some rock climbing was in order. We did a bit of a reccy and confirmed that up was the way to go.

Kev scrambled up some rocks and located a likely looking site, and then lifted Ami up to do the honours. Sure enough, the cache was located beneath the “erratics”

It’s quite a big one ( and quite busy) so we decided to deposit foldingcaravan’s Garmin Visit UK – Angel of the North Geocoin that Kev had extracted from one of Kitey’s Mission Impossible MK series the week before. This coin wants to visit as many countries as possible before September 2010, but so far had managed only to travel to 14 sites in England. At least France is a new country.

So the coin was dropped, and we had a nice walk around the outside of the island, thereby avoiding the crush inside, and Ami enjoyed some rock climbing. And when we met up with parents and Izzy again, they had enjoyed themselves too, just at a slower pace than Kev, Kas and Ami. Result all round, I’d say. Lunch was an overpriced and not very satisfying affair, during which grandad got spilled on. And then we decided we’d had enough. It was starting to rain and the early start was dragging everyone down a bit. So we decided to go home and spent the afternoon watching the rain, snoozing and watching some telly. 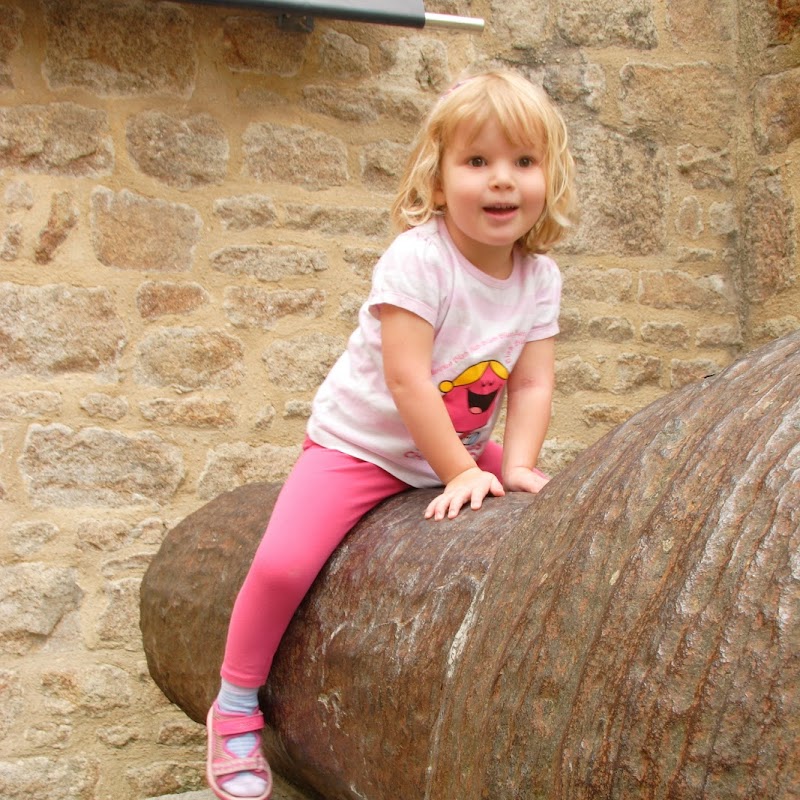 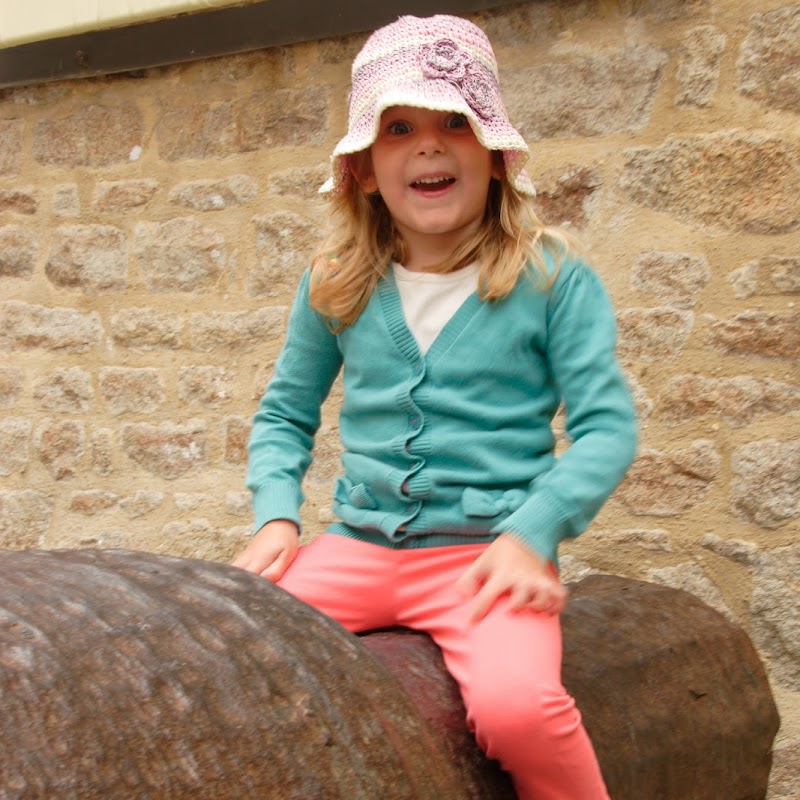 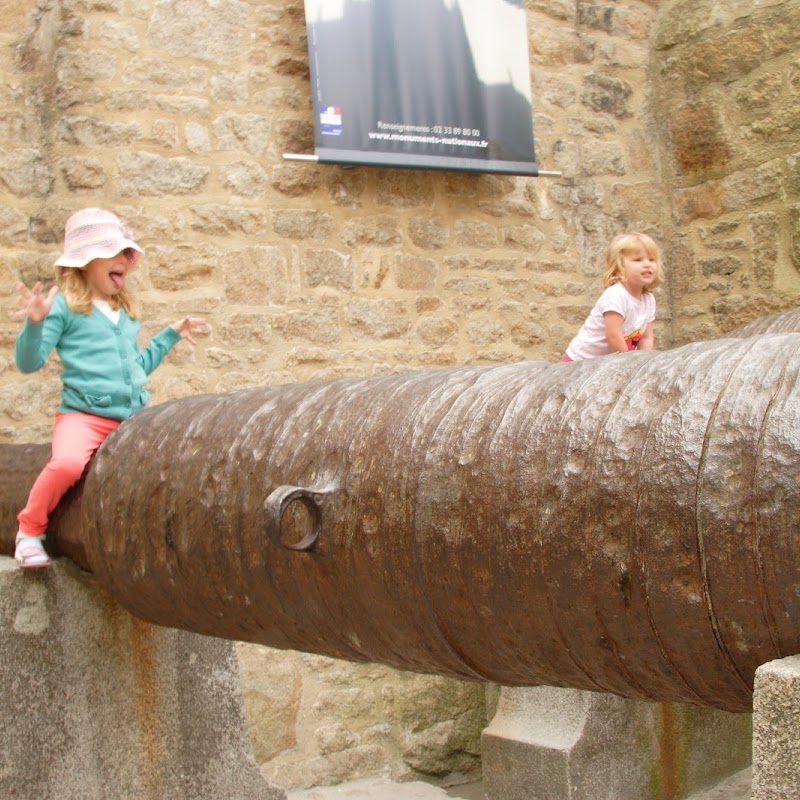 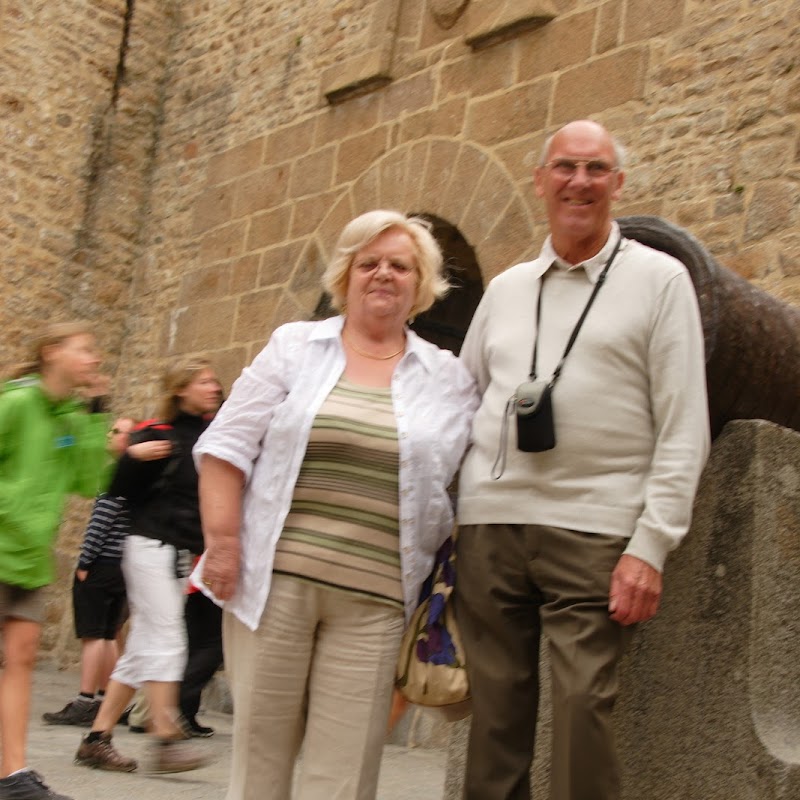 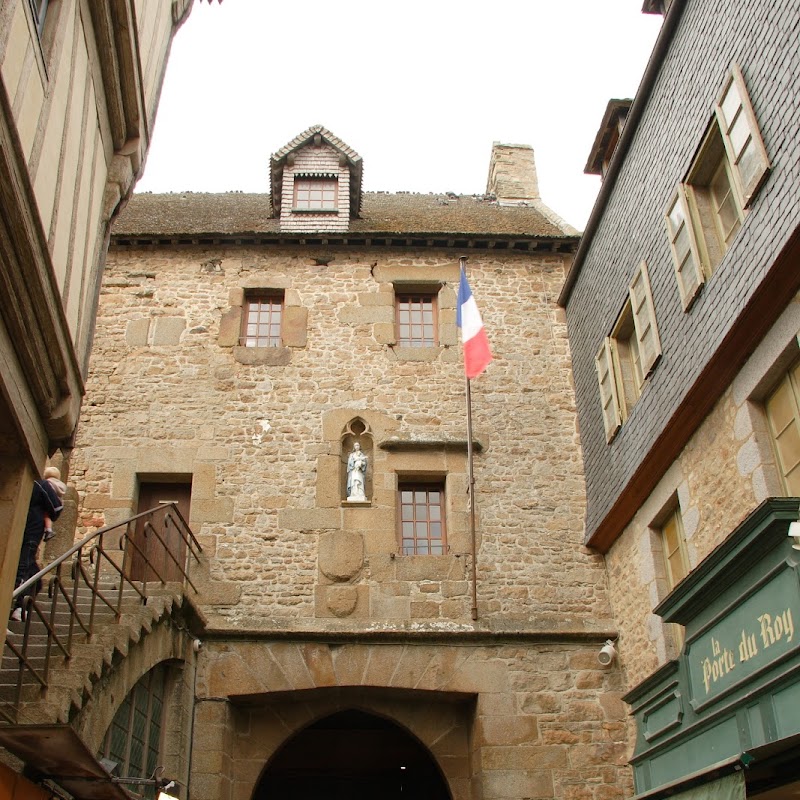 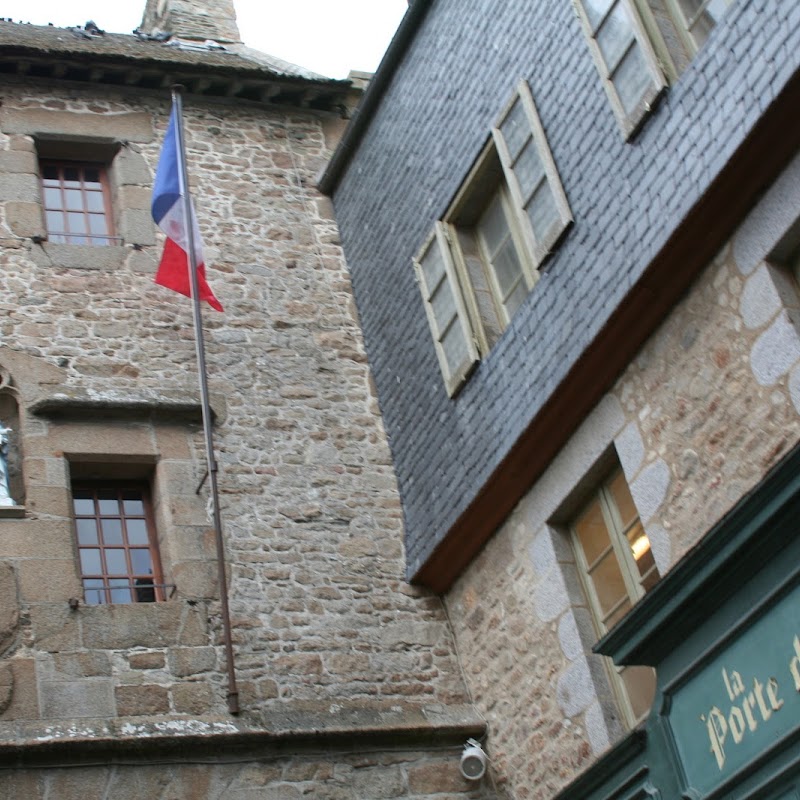 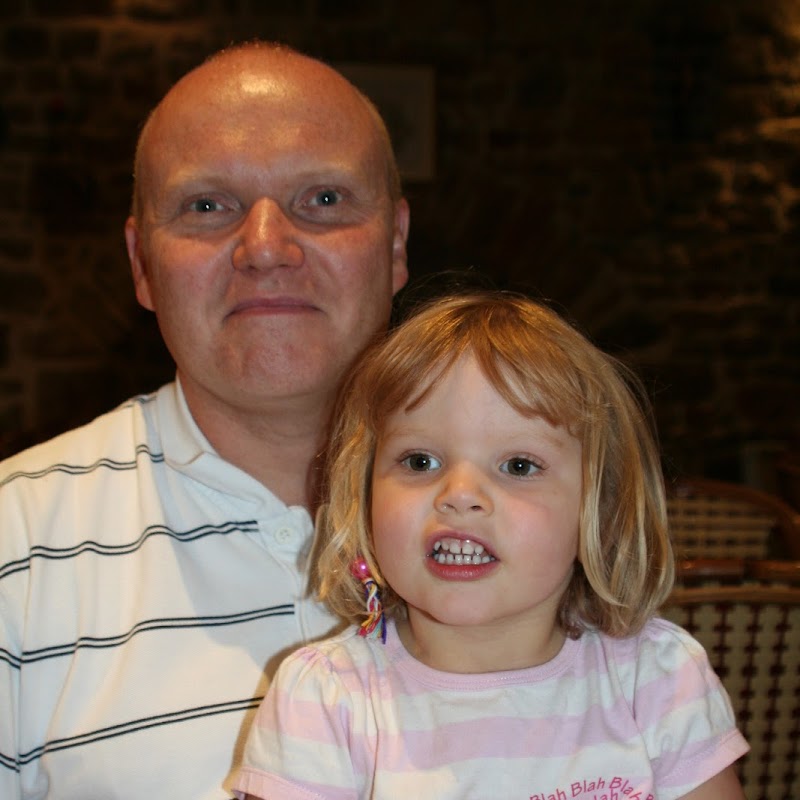 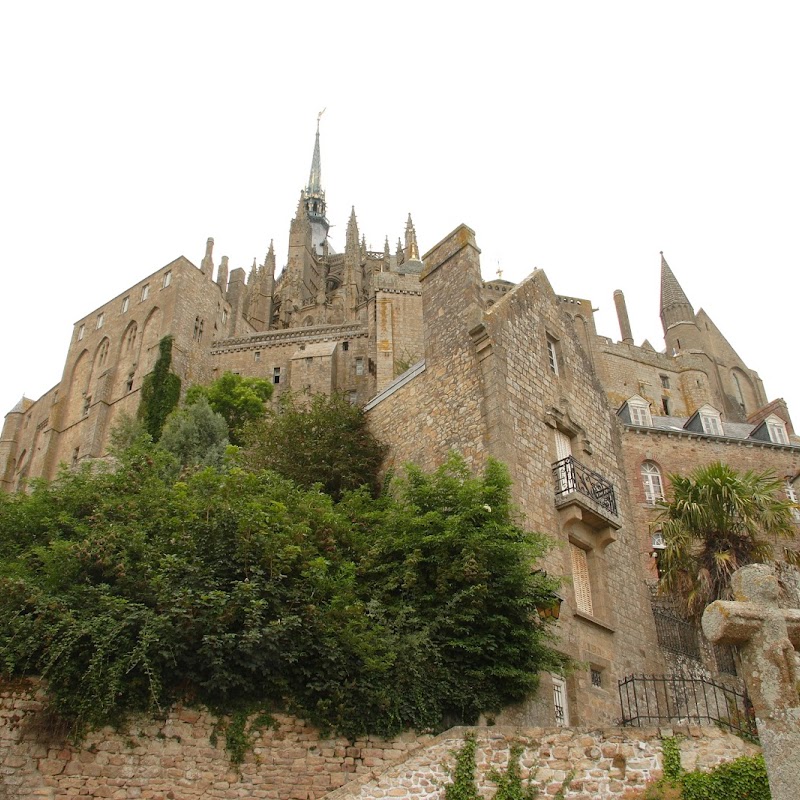 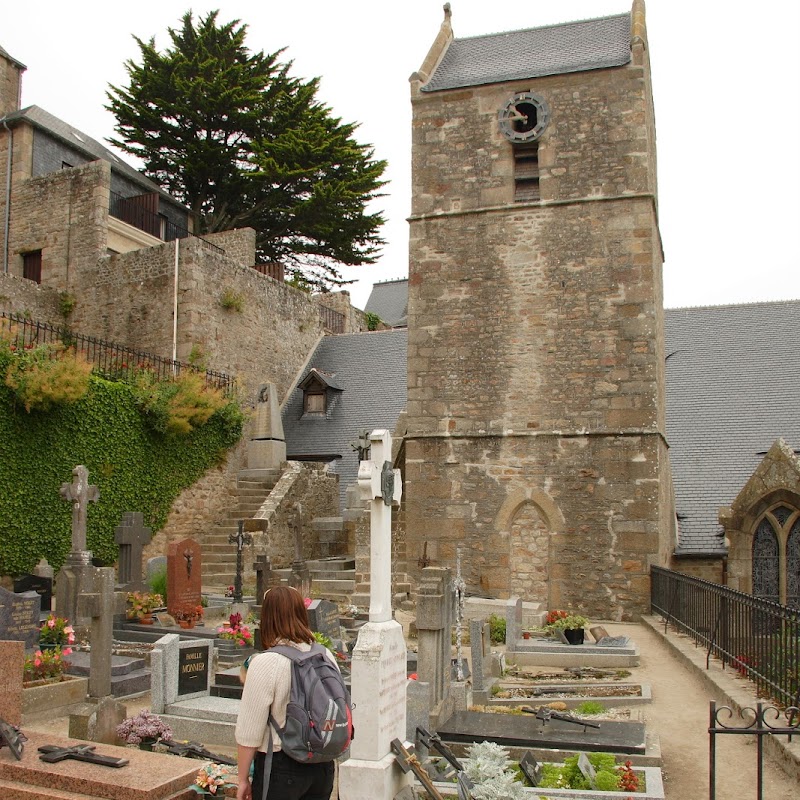 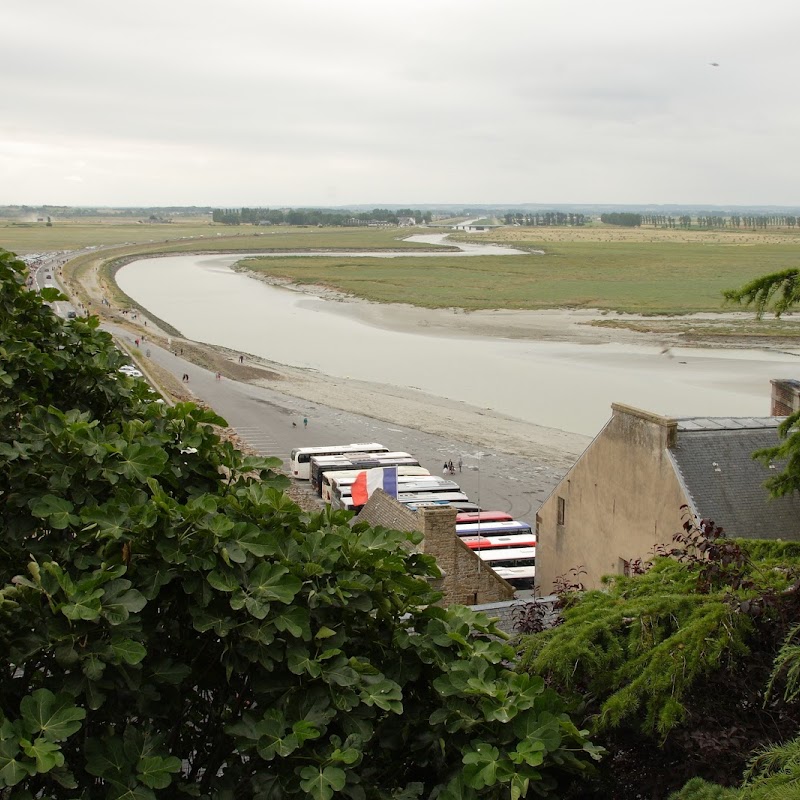 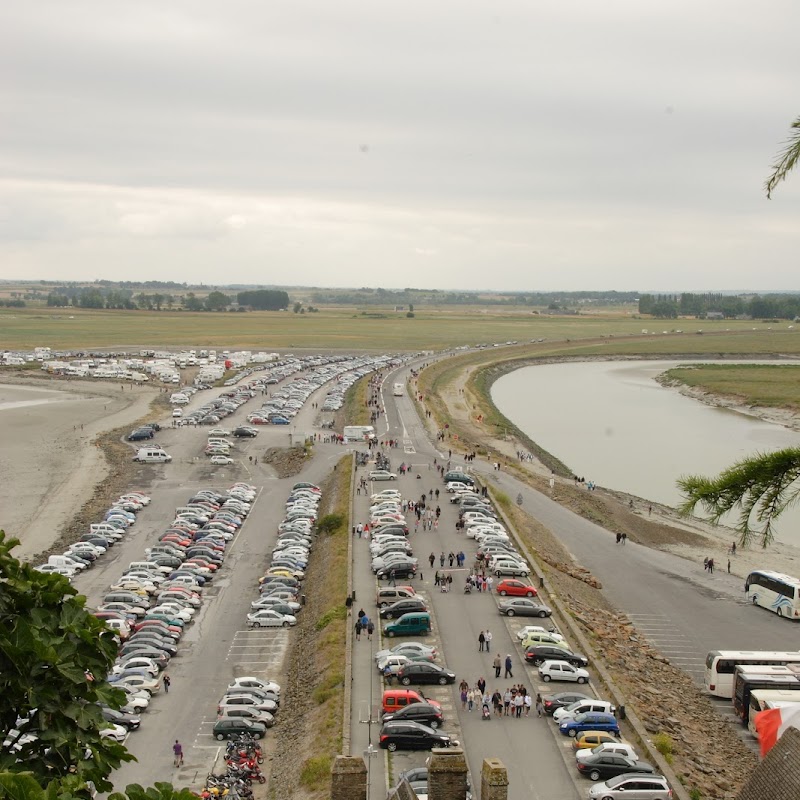 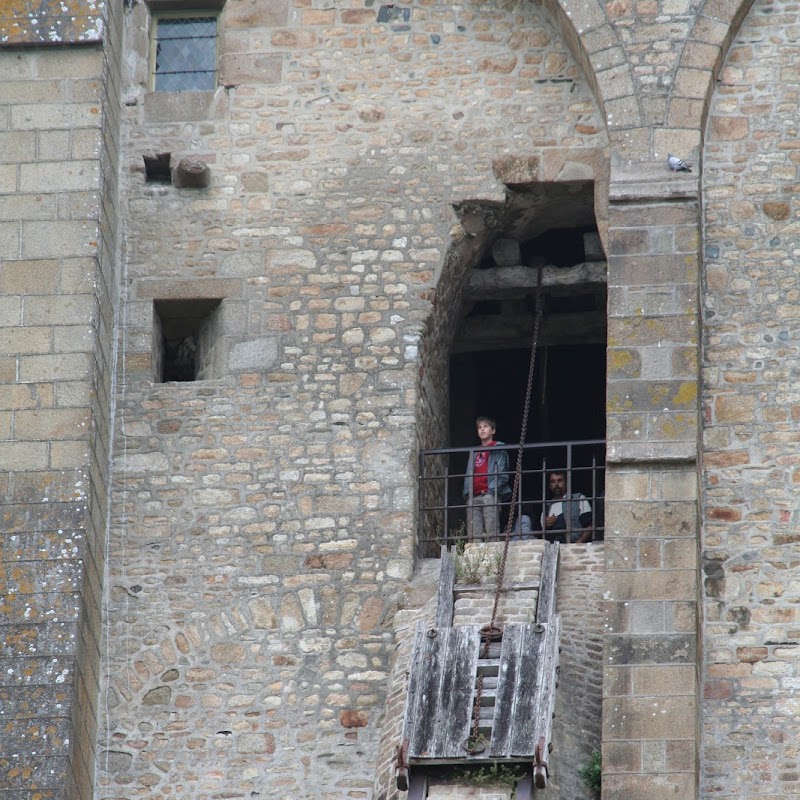 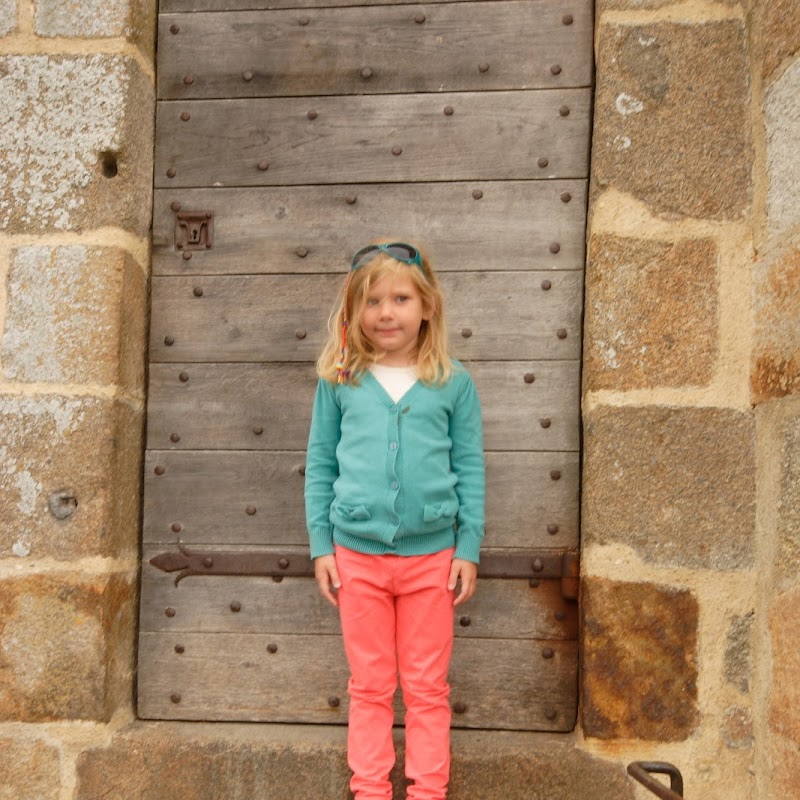 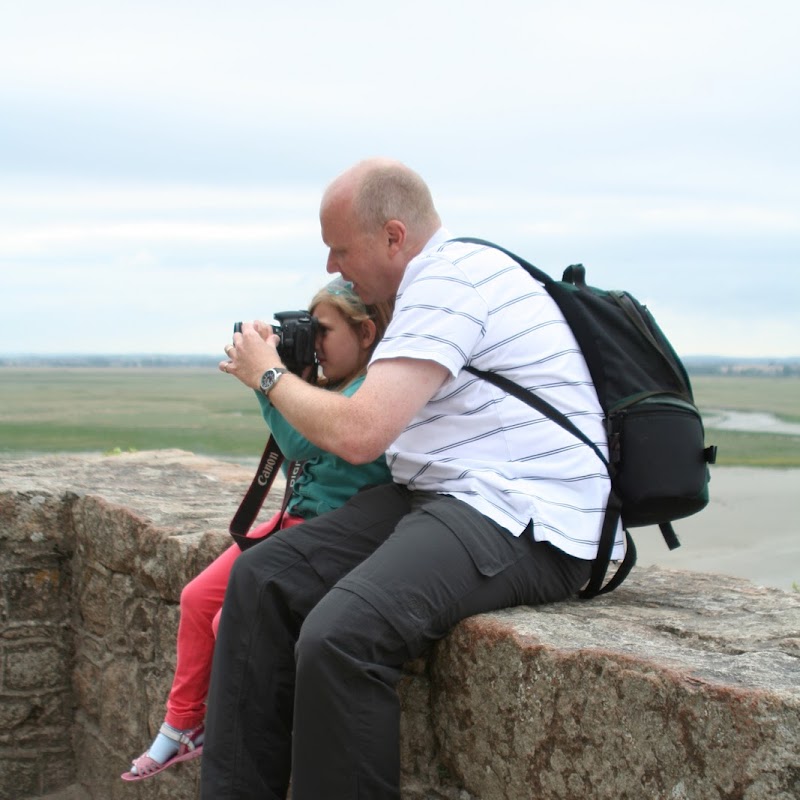 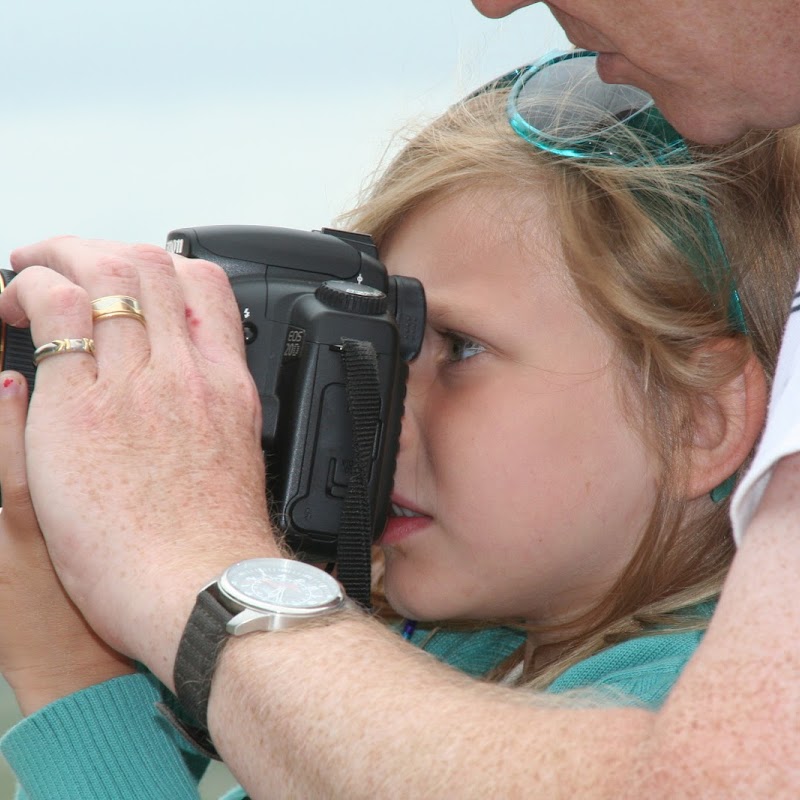 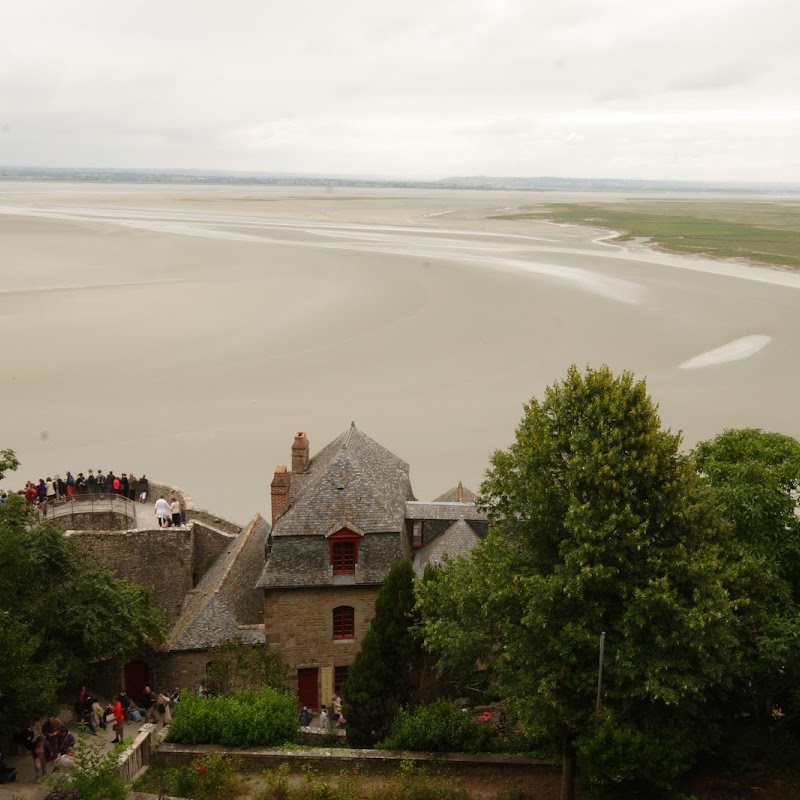 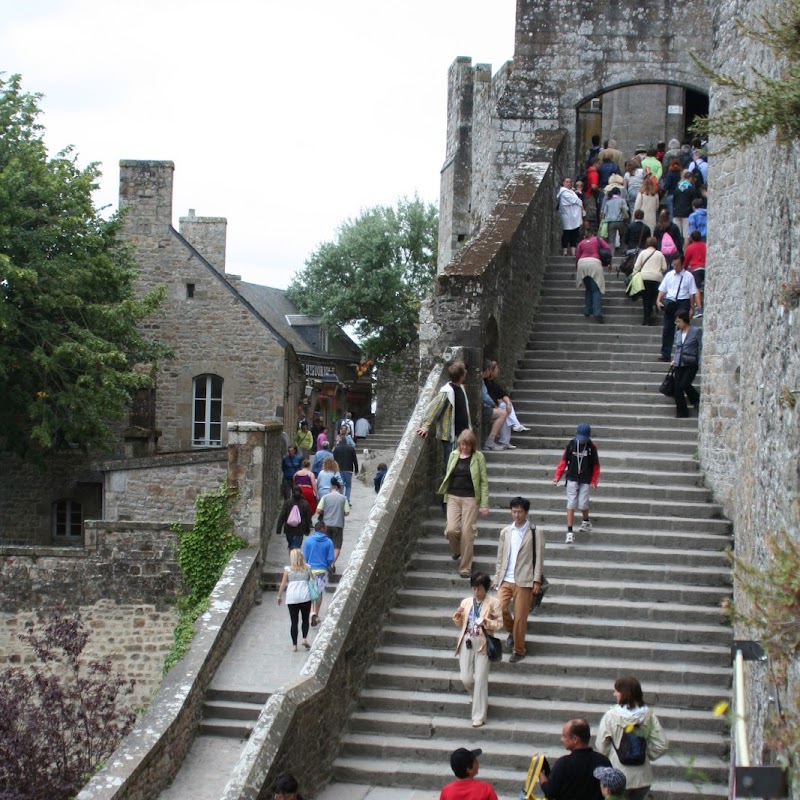 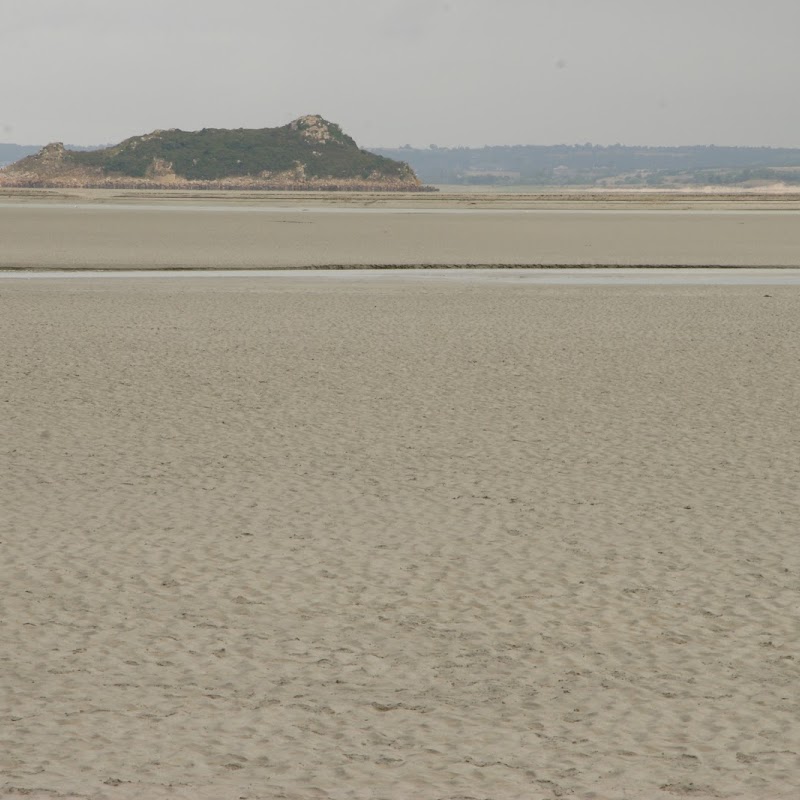 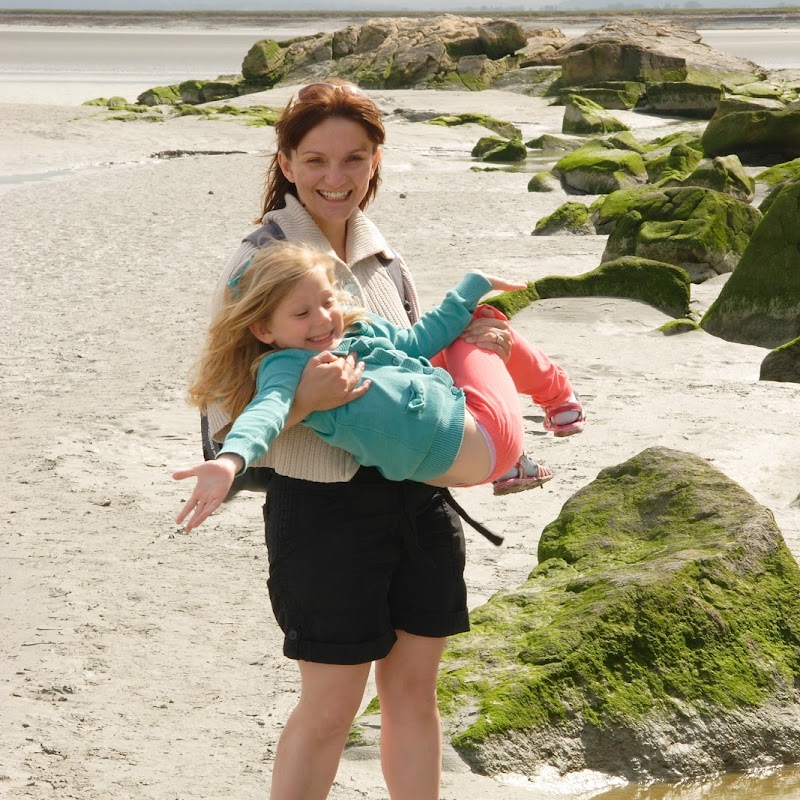 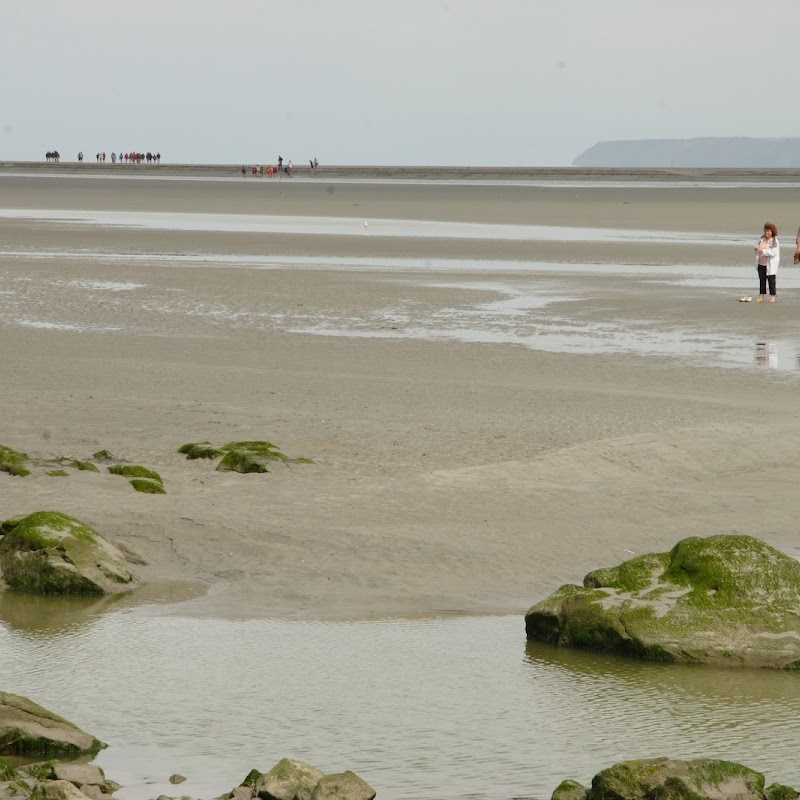 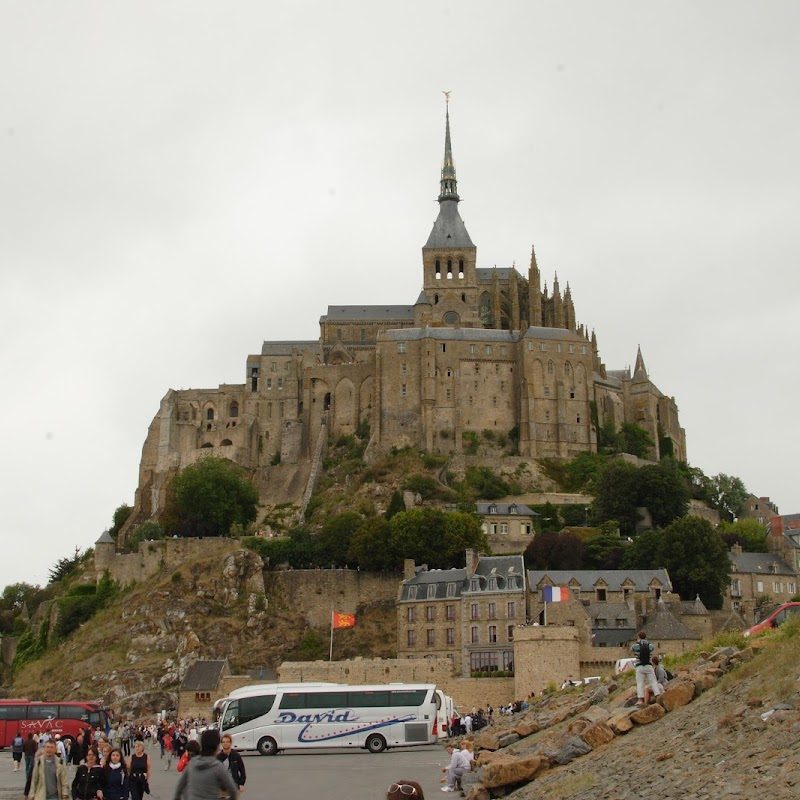 Then we had an early tea of pasta bake and salad before convincing the grandparents to look after the kids while we went caching in St Malo. There were a couple of decent hours of daylight left, So what better way to spend the evening than running round a foreign town looking for bits of tupperware. OK, it’s a lot more fun than it sounds, really. This collection is especially touristy.

First up was Saint-Malo – Tour Solidor de Saint Servan. The one was actually planted by the Haute-Bretagne Tourist Board. One of a number they have planted in some of the finest locations around. To be honest, they are in the kind of places that the average cacher would go to anyway if they were in the area, so look at it from the point of view that you can engage in more than one pastime at once. This particular one was under some rocks halfway up the (very steep) seaward side of a castle. Kas was wearing vaguely appropriate footwear for once,  so we managed both to scurry upwards and search. From the cache location there is a lovely little view across the Rance Estuary upstream towards the Barrage de la Rance (more of that in subsequent logs). We dwelled for a little while. What a pleasant spot. OK, let’s be fair, the Haute-Bretagne Tourist Board have made us go round to a side of the tower that otherwise we would not have. Maybe that’s the point of their placement strategy. Either that, or they just put them wherever there’s a few loose rocks.

All subsequent items found on the evening were placed by gdugardon. He seems to be by far the most active of the local cachers. In fact, we got the impression he was getting more active just because we were there and kept finding all his hides. It’s like he kept setting us a new challenge.

So second up was Cathedrales d’Aleth. The greatest complication here was trying to get the car somewhere nearby. I think we parked in a reasonable spot but there were a few one-way streets involved. This proved an easy find. It was a “I wonder if anything is in here ?” sort of a cache. Kas was mainly disappointed that we picked sides of the structure and I got the one with the goodies.

A bit more walking (uphill) and next up was Cite d’Aleth – Memorial 39 – 45. As the name suggests it is on an old fort on top of a promentary overlooking the entrance to the harbour. You can see upstream as well as downstream, and there is a fantastic view. The cache is not up there though. It is around and down a bit. Then down a bit more, and then a bit more. When you get to the bottom, it is just below there. And then you have to climb back up, and walk back downhill to your car. We picked a dodgy route and ended up spending a good 10 minutes wandering through a campsite looking for the way out.

Fourth for the evening was Cote d’Emeraude #3 – Iron Gate. This is part of a little collection (lacking a bonus) celebrating different ways of getting here. This is named for the nearby station but proved to be at the back of a car park outside a block of flats. It was a nice little cache but the location was weird. It just felt wrong to be there. We both felt rather out of place. but nothing like as far out of place as …….

GR34 – Cote d’Emeraude #1 – Sea Gate, which celebrates arrival by sea. Due to a total misreading of the hints by Kev we started off doing a very thorough (and unsuccessful) search of the car park before Kas realised the error and we moved on. We definitely looked like terrorists, rummaging around between car park and the entry to the ferry terminal, appearing randomly out of bushes and staring at all manner of things. Once we got on the right course it wasn’t too difficult. You had to locate a couple of places around a large rock structure and read a couple of bits of info that had been carved into there. This gave 2 clues to a very easily located final cache – all within 200 yards of each other, and none of them anywhere near the parking spot. Lesson learned – read the text first…..

By this time it was getting pretty dark so we decided to retire for a drink – coffee, beer, whatever. So we drove round to the old town and once again struggled to park anywhere. Once we did manage to park up we scooted over to the east end of the old town to a little area with street stalls and multiple cafes, one of which we sat at and sipped at a very French espresso.

The light was not totally gone so we thought we’d have one final pop at Saint Malo – Porte Saint Thomas before reporting it lost. This time, however, the location was relatively free of both bicycles and people, so we were able to have a proper rummage without too much suspicion being generated. It took a couple of reaches but Kev suddenly put his hand on something definitely non-metallic and whipped out the traditional 35mm film canister wrapped in duck tape. Excellent. It really does exist.

So all in all a good night’s hunting. We went to some places we would not have gone as a group of six and it was definitely nice to spend a bit of “Kev and Kas” time. The kids are great, but they can be hard work.