Day 2 started at a fairly leisurely pace with some breakfast at the Ibis. For Kas, Kev and Ami it had been a restless night with lots of sneezing, coughing and changing of beds. Ami, bless her little heart, had spent half the night getting up to fetch tissues for Kas. In the other camp there had apparently been several hours of sound snoozing, which was only broken by Izzy needing a new nappy and then taking half an hour to settle back down again, during which time she was talking away like a talkie thing.

This time around we learned our lesson from last year and decided that the hotel breakfast was probably a good deal. And so it proved to be. There was a good selection of fruits, cereals, breads, drinks and other goodies. Plenty for all, in fact. I’m still not quite sure why they allow you to pre-pay adult meals but not childrens’, but the kids ate well along with the rest of us and by French standards we all got our money’s worth.

And so quickly upstairs to cram stuff into the overnight bags and clean our teeth, and then down to the Batmobile for a bit of cruising. Kas took the wheel and we quickly discovered that we were more or less on the road Felicity wanted us to be, and also were pointing in the right direction. So we escaped from Rouen very easily and were soon heading along the A13 in the direction of Caen. We had to push hard on the wheel to avoid driving down the A28, which is where you go for La Rochelle. Not that way this time, thank you very much!

The road towards Caen is fairly uneventful apart from the large quantities of north Europeans heading in the same direction. All the toll stations were heaving and our choice of booth was limited at all of them by the fact that the credit card only lanes have a 1.8m height limit. Nett result of this is that anyone with a caravan, 4×4, people carrier or roofbox can’t pay by credit card. You only realize that far too late in the day and so there’s a large number of cars doing the soft shoe shuffle between lanes at the last second and generally causing confusion. We let in a bloke in a big 4×4 mainly because he opened the window and actually asked us. It wasn’t just because he was English, it was because he was nice about it. Ya Boo Sucks! to the French family in the Volvo who pulled in and nearly took our front bumper off.

The journey to Caen therefore took a bit longer than Felicity predicted and very much in time for an early lunch or late elevenses. We refuelled first, and this, too, took longer than necessary because the pay at pump insisted I put the nozzle back before it would take the credit card. I had put the nozzle in before I noticed the pay at pump option. The Peugeot isn’t the most thirsty of cars but she does have a big tank, so it costs a couple of quid to fill her up from near empty. Last fill up was last Sunday though, so a three quarters of a tank has seen Kas around MK for five days and then driven us to Caen from Milton Keynes.

The Giberville Services can best be described as a fuel station on steroids. French motorway services seem to come in two types – big, well provisioned ones, and over-sized fuel stops. This is a pretty busy motorway on a Saturday in summer and the immediate problem when we parked was the large and ever increasing queue for the toilets. Normal French arrangements apply, meaning that the ladies queue was actually a queue for any of the cubicles regardless of which room they’re in. Kev took Izzy into the gents (the baby change had no toilet and the disabled was locked….) and played the “this is the gents and I’m a gent” card despite carrying a small female. Well, it was that or a damp shirt.

The services did have a small kids play area so the girls got a bit of a run around while the rest of us queued, rotated bicycles and checked football scores, as it were. Having finished the necessary we then did a bit of free-form buying of drinks and biscuits with no particular structure and all ended up outside with a drink and some biscuits. And some smoothies (Fraise & Banane flavour) which Ami managed to knock over on the table. Good job it was an outside table.

So back to the car, with Kev at the helm and grandad translating Felicity and reading the book. We had to negotiate our way round Caen and an enormous queue for one of the junctions (our junction, as it happens) and then on to the A84 towards Avranches. This is a toll free section and hence also queue-free. It was quite busy but kept going all the way and it actually passed away very quickly. Just after Avranches it becomes the N175 and goes single lane for a bit. Not a problem as such except for the near tail-ending when the two lanes suddenly turned into a queue just round a blind corner. Sharp braking ? Hmmm! Just as well we don’t have a very heavy car with six people and a roofbox on top.

The N175 turns into the N176 and gains an extra lane at Pontorson and we breezed through this section and then the final few kms to Le Tronchet, our home for the next two weeks. It proved really easy to find the place, as it was all well signposted. 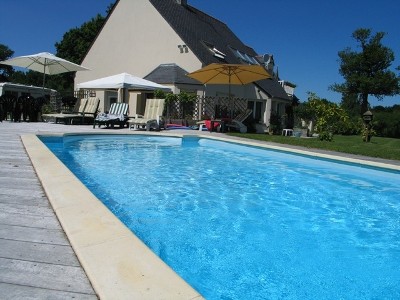 The apartment was ready and the owners were there to welcome us. In particular, they welcomed us with a fridge full of food that was more than enough for lunch. They had very nicely left us some wine as well. Can’t be bad. So we sorted out the sleeping arrangements and unloaded the car and got some lunch and took the roofbox off.

After that, there were two streams of activity. Ami, Izzy and Grandad stayed put and played in the garden. Kev, Kas and Granny went shopping for food in nearby Plerguer. The Supermarche Utile in Plerguer proved adequate for most purposes and we were back fairly soon and unloaded. We then remembered what we had forgotten to buy. Milk. Can’t get Izzy to sleep without milk. So Kas got her swimming kit on to stop Ami from exploding and Kev jumped back in the bus and went back to Plerguer. Didn’t take long though.

Tea involved three types of sausages, potato wedges and salad. Then the kids got a bath and went to bed. Granny and Grandad retired to the studio and Kas and Kev had a glass of wine and contemplated the holiday to come.

We got here fairly easily. Not much crying, not much complaining and not so much time. We made it here without the portable DVD player and without much use of the iPod. In fact, it was quite a pleasant trip down.