The motel did, however, have a room where they did free breakfast for guests – cereals, coffee, pastries, fruit and free.  This was more than sufficient.  The gas station outside the motel was sufficient for refuelling and lunch, so off on the road.

Capitol Reef was about the most lonely place we visited.  After a quick stop off at Goosenecks Overlook ( deserted )  we headed down the Scenic Drive and parked up at the end of the Capitol Gorge trail.  Capitol Reef is a very long, thin area which follows a geological feature called the Waterpocket Fold.  There is a huge area up to the north which can only be reached by a huge round trip on unpaved roads.  Likewise, there are large areas on the southern spur which can only be reached on unpaved roads.  As we were short on time we were only really left with the Scenic Drive and the stop offs on the main road through the centre of the park. From the Capitol Gorge park, at the end of the scenic drive, we started with the hike towards Golden Throne.  It was a quite long walk, with lots of canyons and headlands, rough stony paths and slick rocks.

At some points, you had to work hard to identify the pile of rocks that was the marker for the trail, in other places it was obvious.  It was a long way, and I don’t think we ever found the Golden throne itself.  We eventually gave up when we were two thirds of the way through the six litres of water we brought with us.  This was our yardstick for the holiday – two thirds of the water going out, one third coming back, regardless of the location.  We were probably away from the car for nearly three hours on this walk and we didn’t see another soul for the whole time.  We were very parched and a bit tired when we got back, and helped ourselves to some more of the water reserves from the boot. 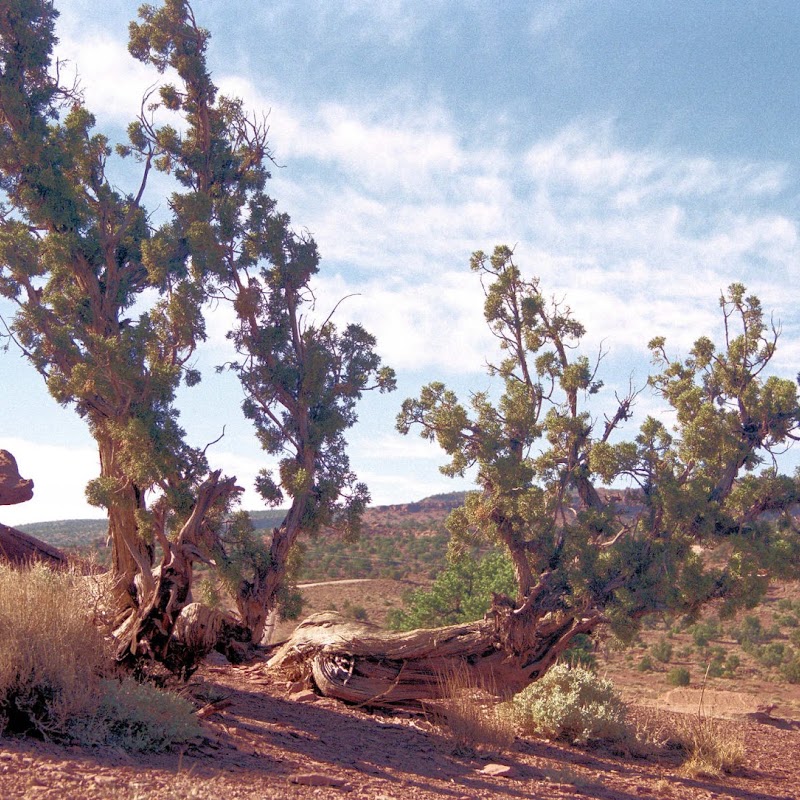 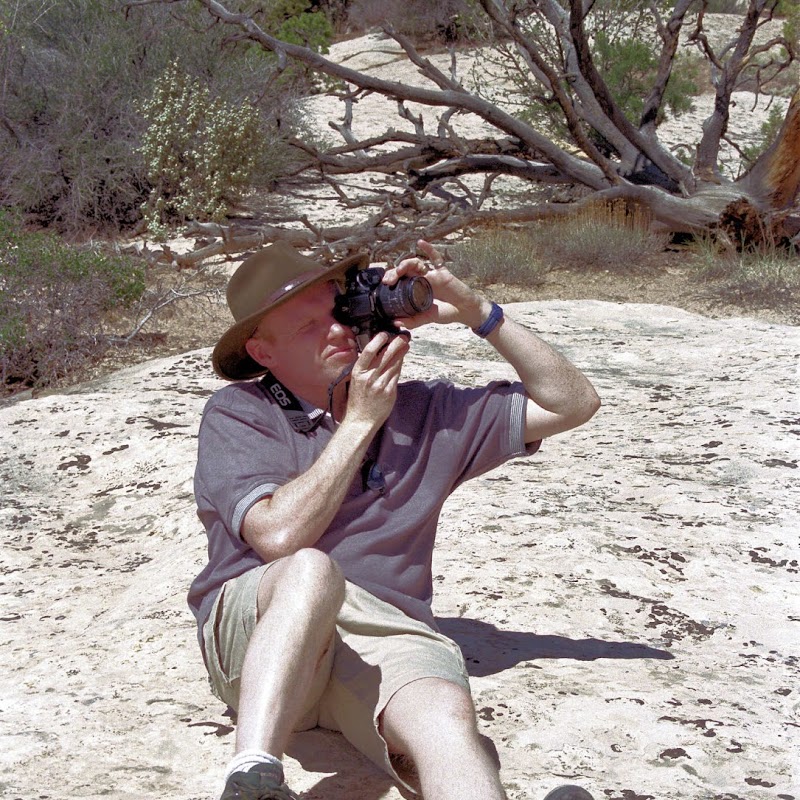 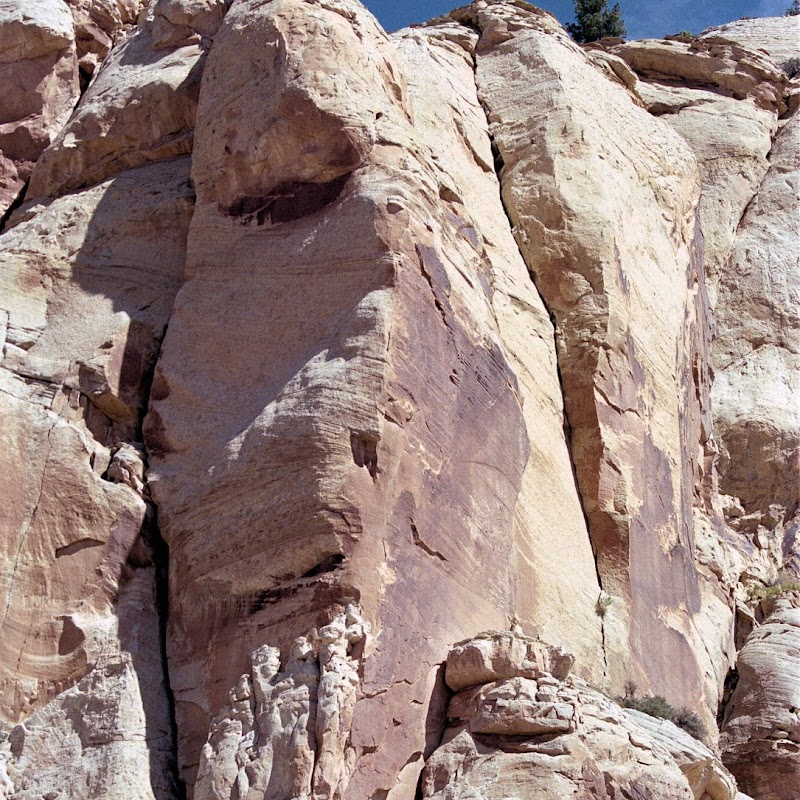 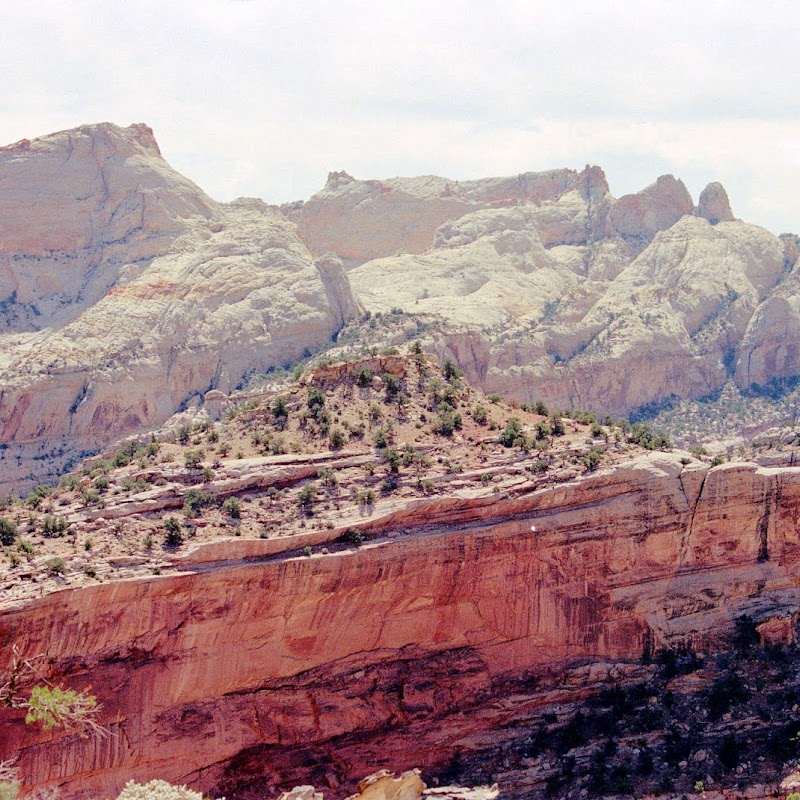 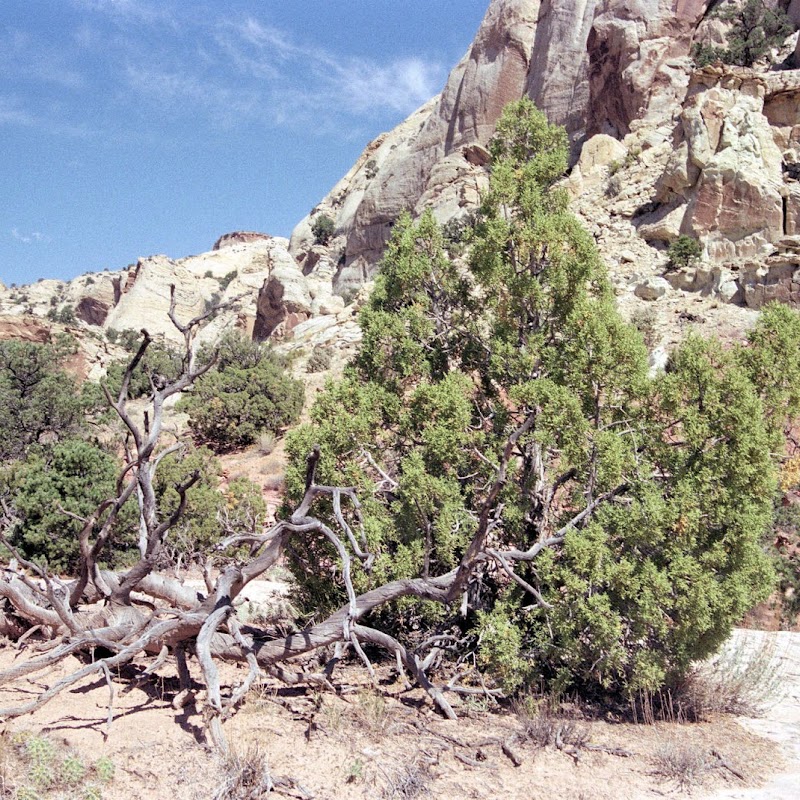 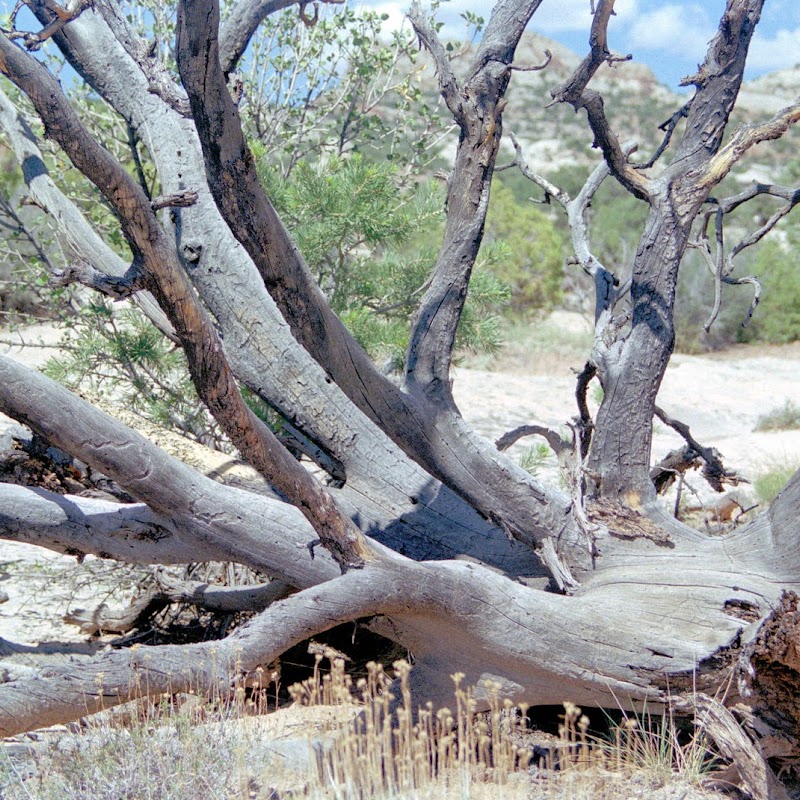 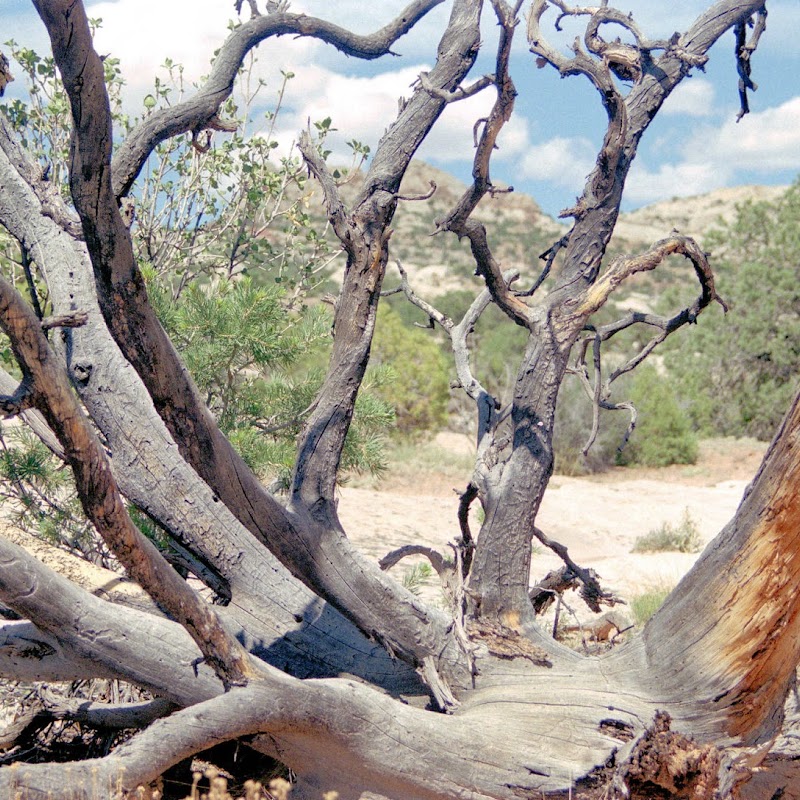 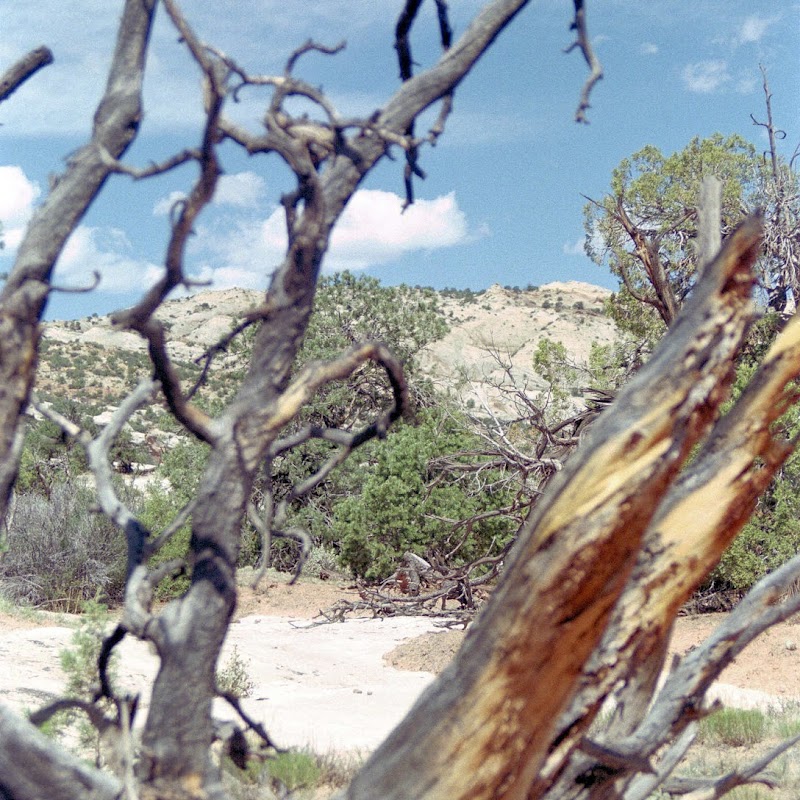 We then forced ourselves to walk up the Capitol Gorge itself for as long as we could be bothered.  Kev could be more bothered than Kas, but neither of us was that bothered, so I think we only went about a mile or so.  It was nevertheless impressive to think that for quite some time this was the main ( and only ) road through the Waterpocket Fold.  It is a stony dried up river bed.  Whenever it rains there is a flash flood and you need to be able to climb quickly up slick rock slopes to avoid drowning.  The vehicles that used to come this way must have had a pretty high ground clearance.  Maybe when it was an actual road, people used to carry the bigger stones out of the way, but not so now, and there are some pretty big chunks on the floor of the gorge.  The side walls are scoured fairly smooth by the rubble caught up in the occasional floods, and here and there are strange formations where rocks have been caught up in eddy currents and have scoured little potholes in the sidewalls.  However, at this time we were both mainly concerned with the aches in our feet and rumbles in our stomachs, so we moved on. 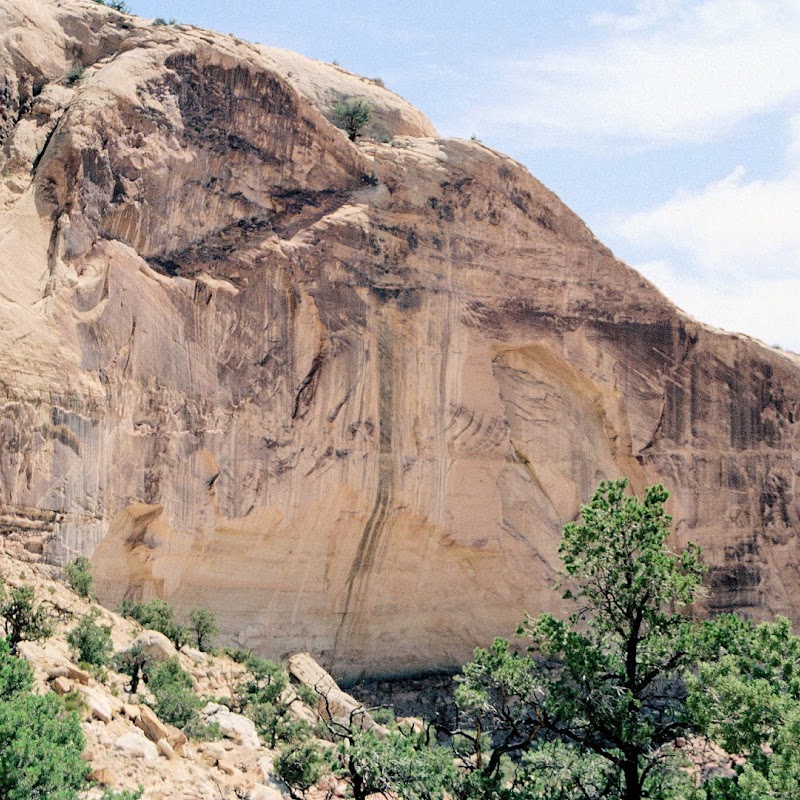 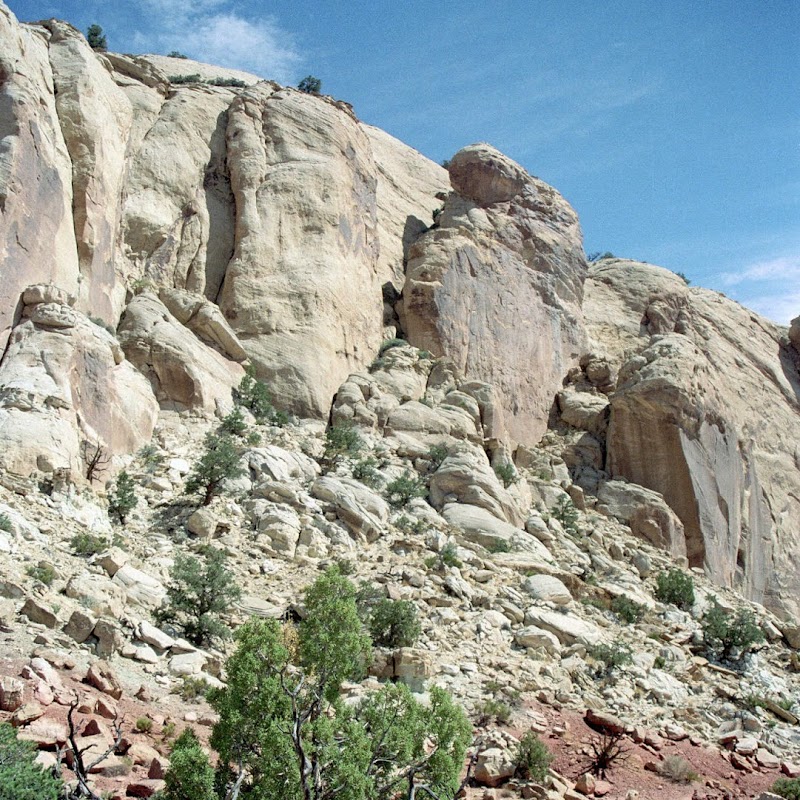 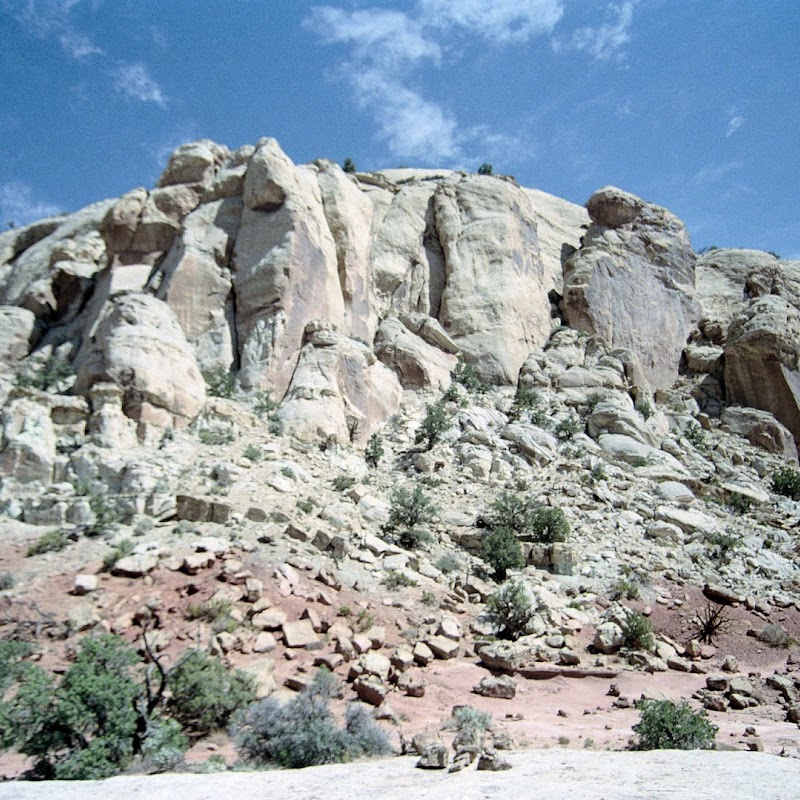 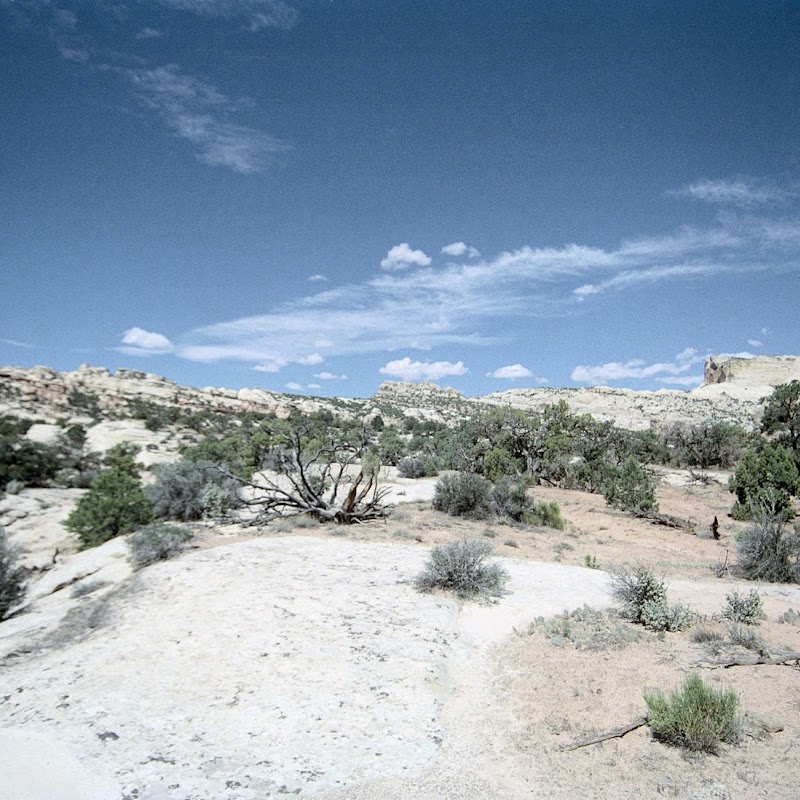 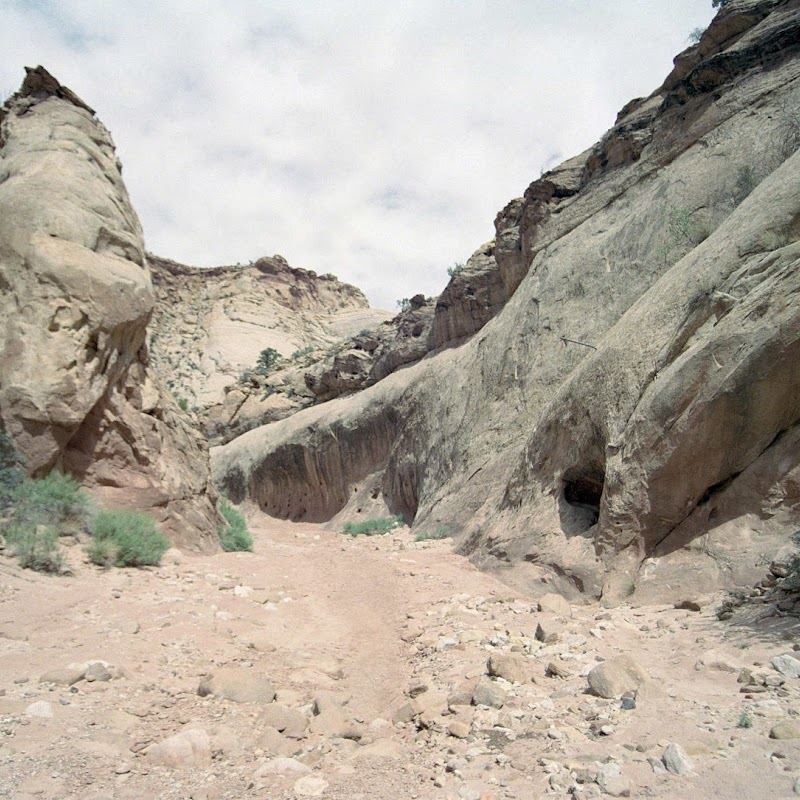 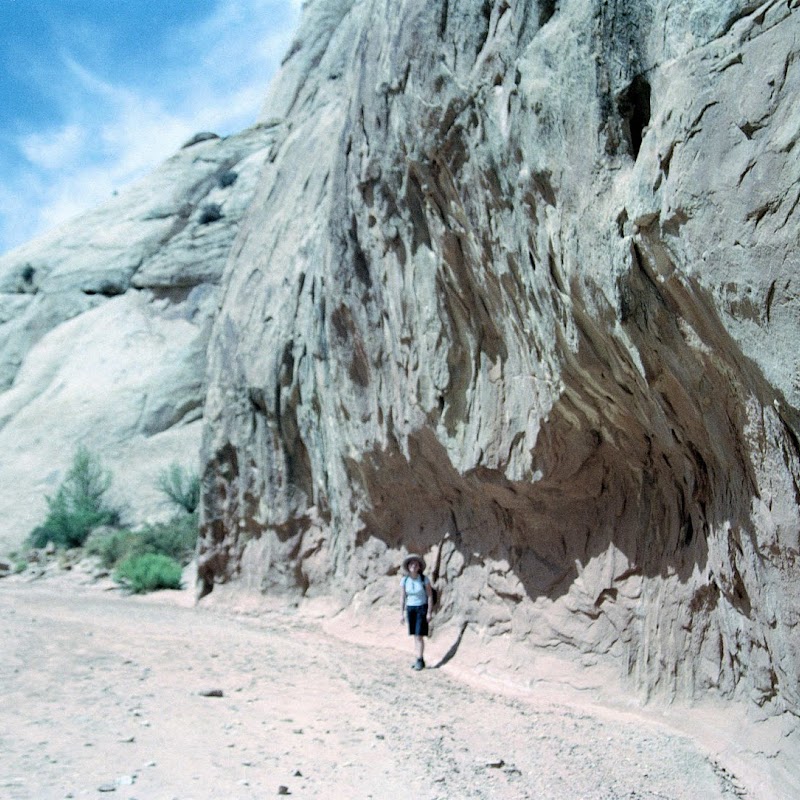 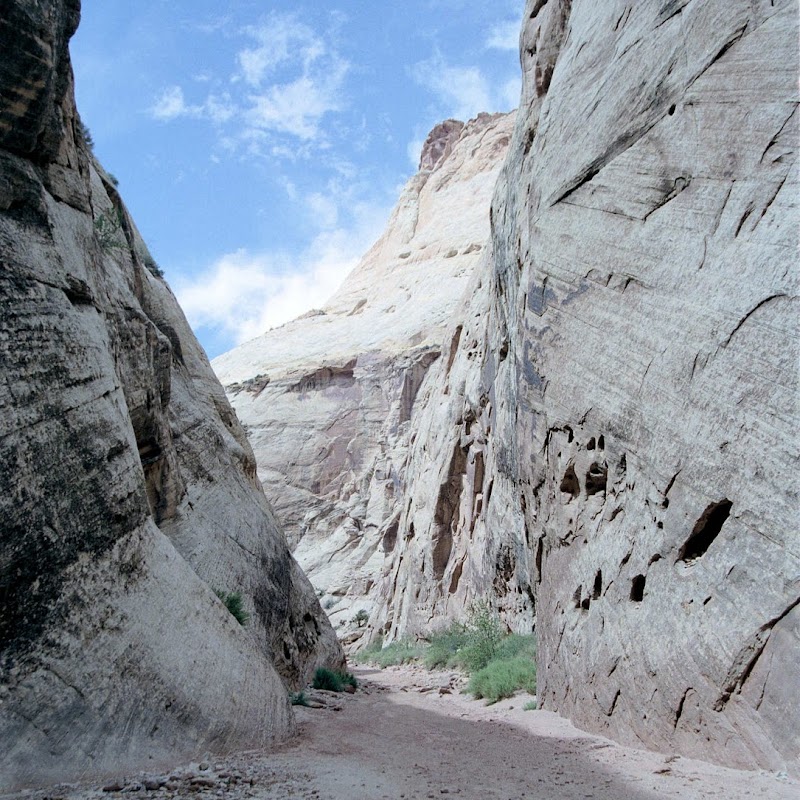 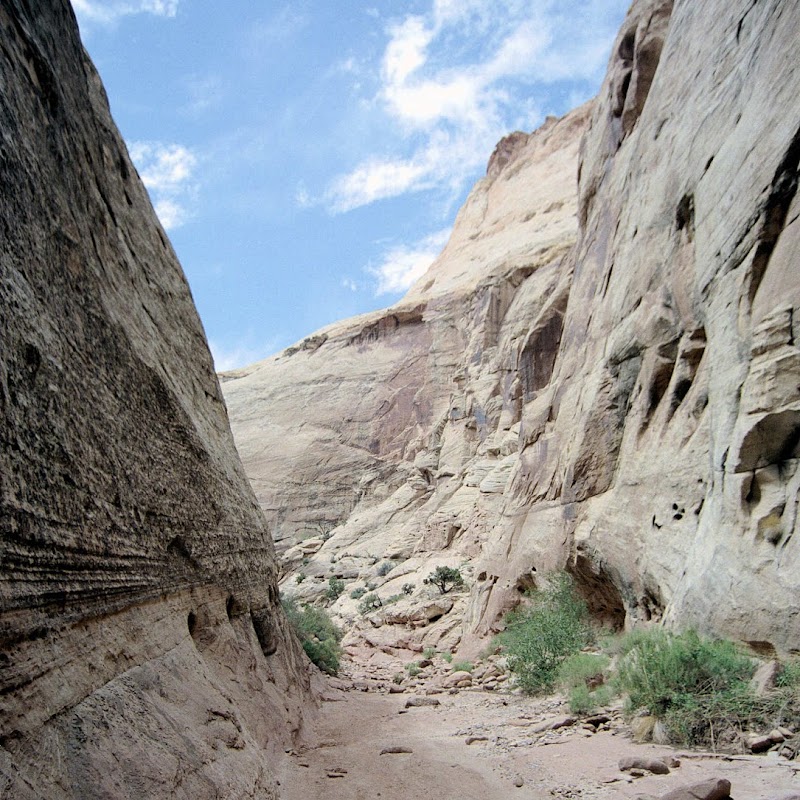 A quick look at the map, and a bit of route planning, made us feel that we needed to get a move on.  We wanted to get over to Monument Valley by nightfall, and it’s the rough end of 200 miles from Capitol Reef.  We therefore had to leave Capitol Reef without stopping at any of the stops on the main road.  We continued straight through to Hanksville and made a stop for lunch.  Shame really, the northern part of the park, the Cathedral Valley, is supposed to be particularly impressive.  Maybe we’ll come back on another trip some time. 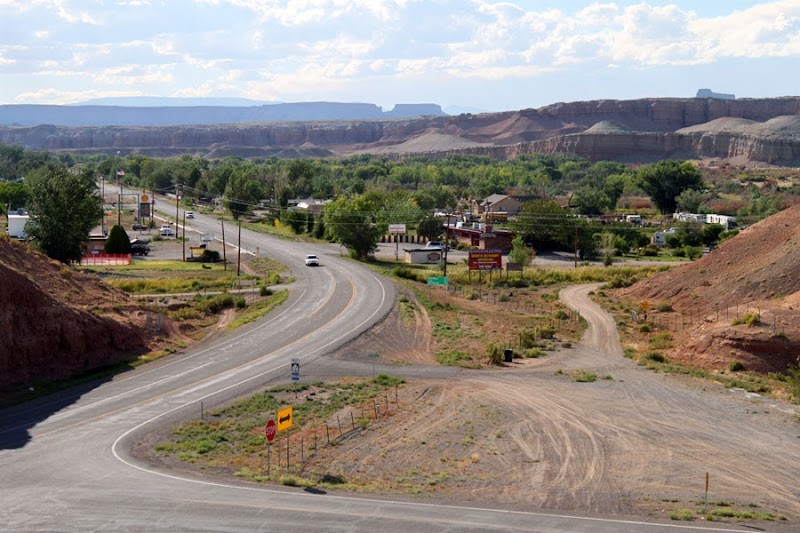 Hanksville is quite a long way from anywhere else, and to a certain extent, it shows.  There was nothing especially wrong with the place we stopped – the food was fine and the coke was cold – but we got distinct feeling that we were from out of town.  We didn’t linger for very long, we just got back into the trusty car and set off south along Utah 95.  This stretch of road was everything that a European would expect of the American west.  There is really nothing there.  The road is well surfaced, but there isn’t much evidence of it being well used.  It passes through some tremendous scenery, with badlands, and the enormous Henry Mountains, the Glen Canyon National Recreation Area with its dramatic deep red rock formations.  It’s 95 miles from Hanksville to the junction with Utah 261 near the Natural Bridges National Monument, and in that whole time I think we passed two cars going our way and one going the other.  This was mid to late afternoon on a weekday, so I would have expected at least some occasional business traffic like delivery lorries, but there weren’t even any of those.

As we approached the Natural Bridges National Monument ( www.nps.gov/nabr/ ) we could see the sky looking a bit threatening as if a thunderstorm was on the way.  We consulted with the ranger in the Visitor Centre and he concurred, it was about to rain.  As time was once again marching onwards we restricted our trip to a quick stop off for photos at each of the three bridges.  There is a little car park and a viewpoint at each, and also a trailhead for a hike running down to the bottom.  To be honest, the view from the top is limited.  In dull light with no shadows the scene looks mainly like rocks with a backdrop of more rocks, so we didn’t really get good photos, but then we didn’t have the time ( or the will, bearing in mind the weather ) to do any of the hikes. 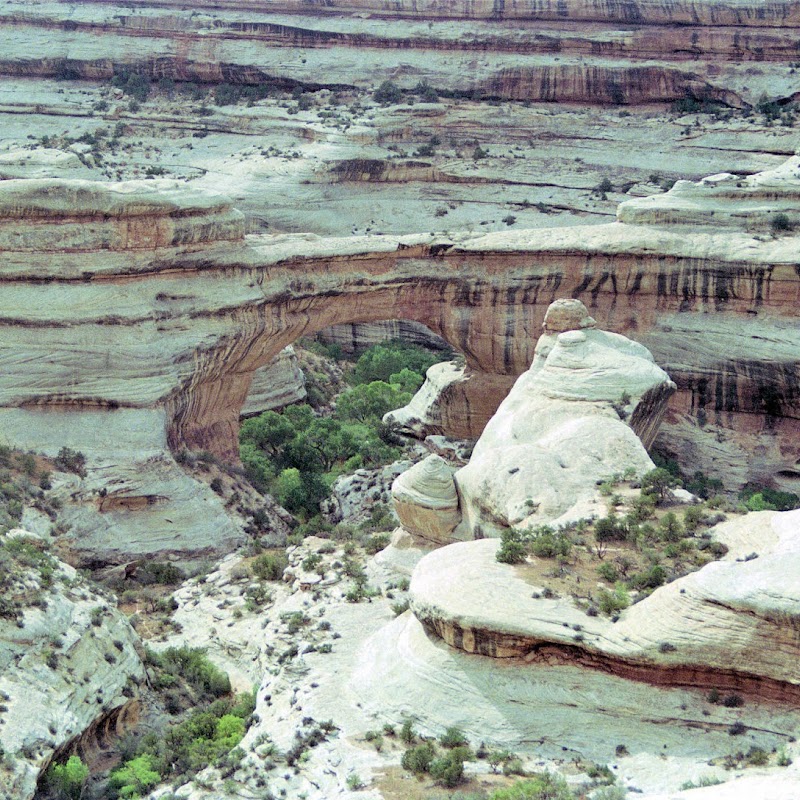 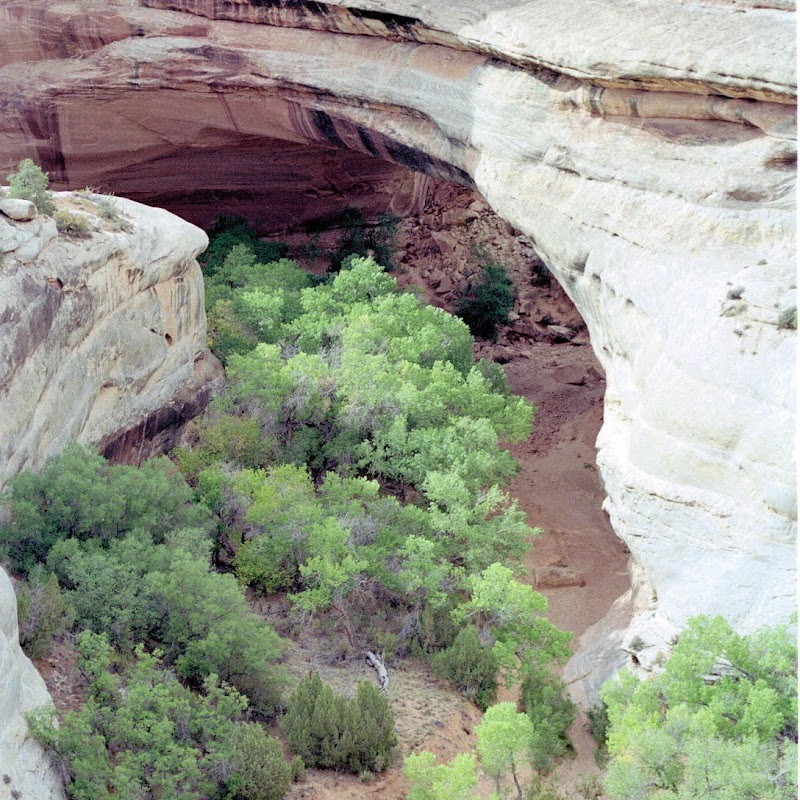 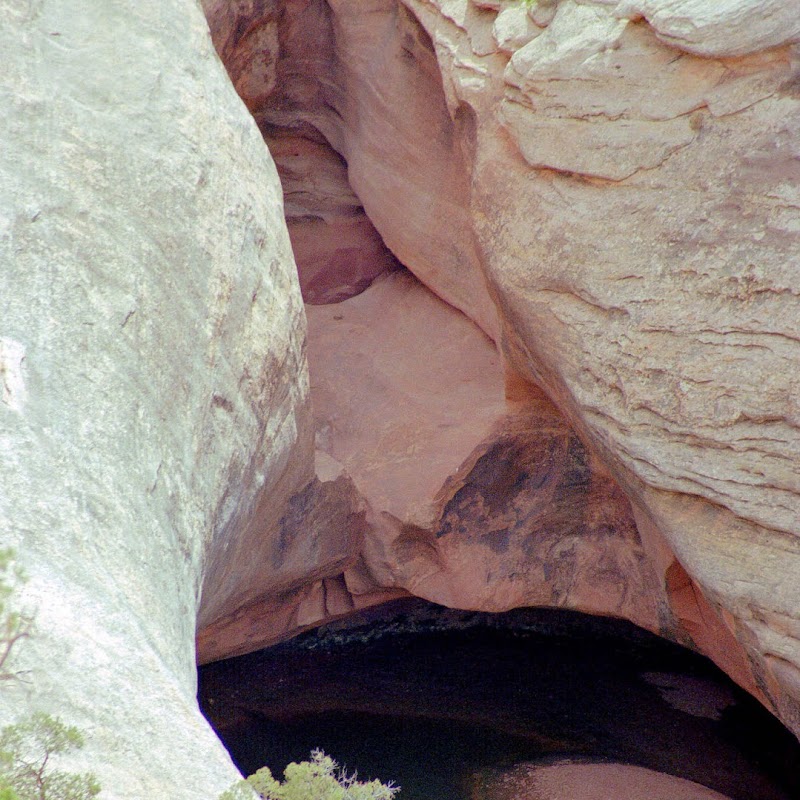 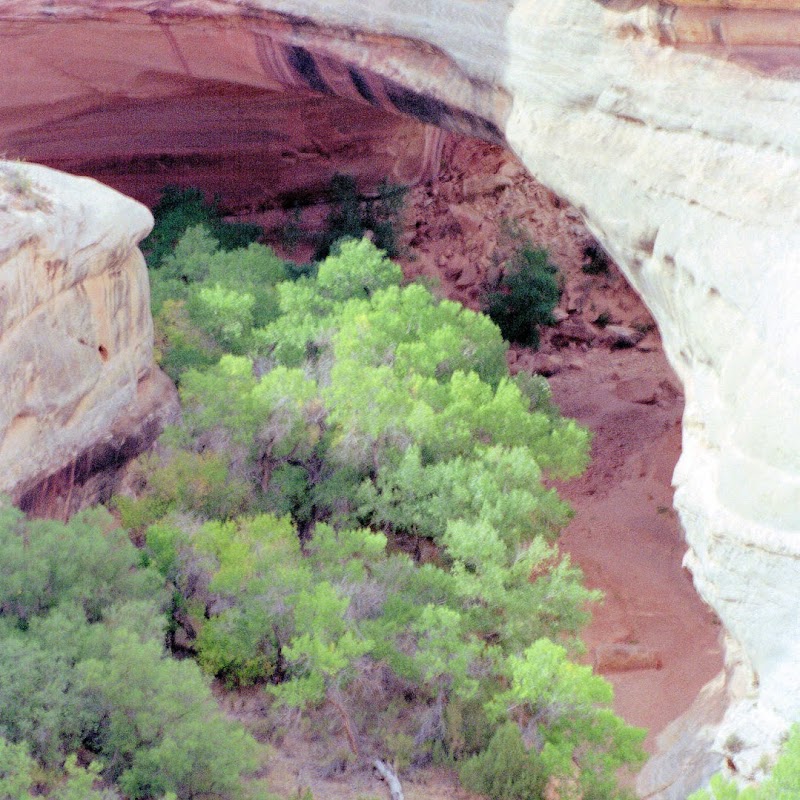 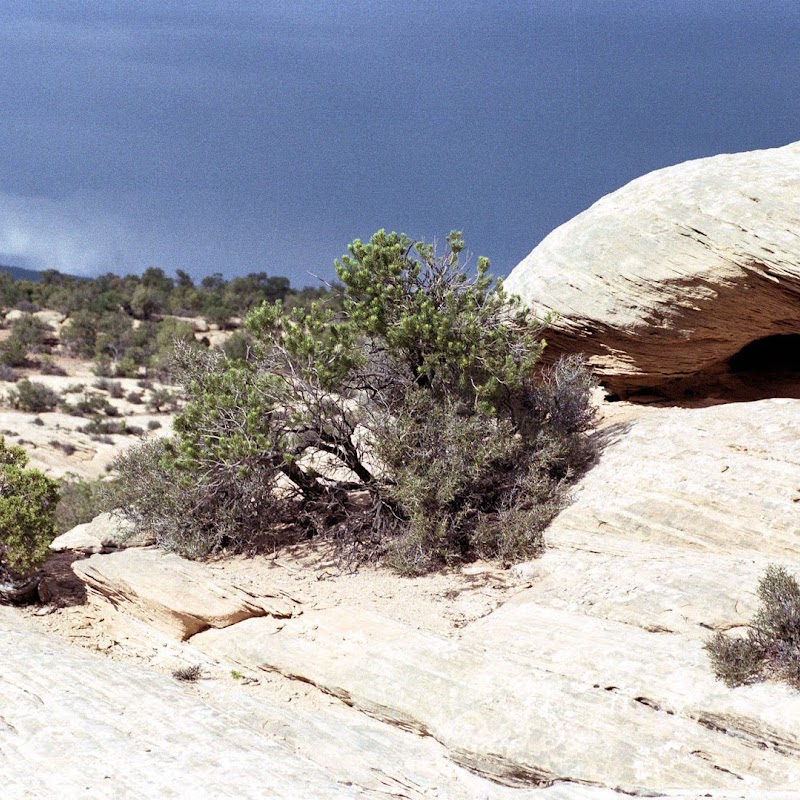 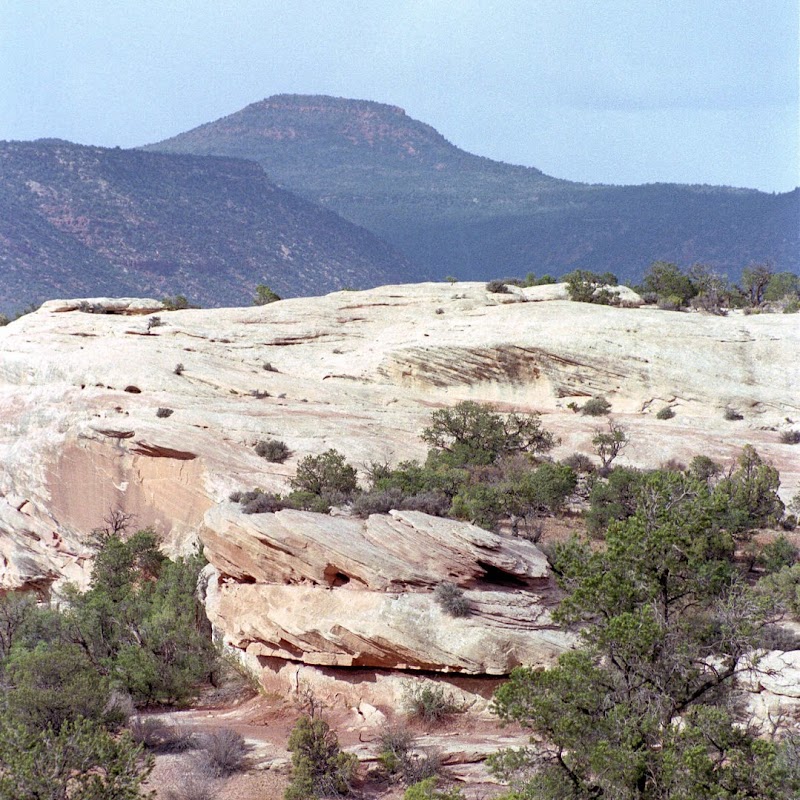 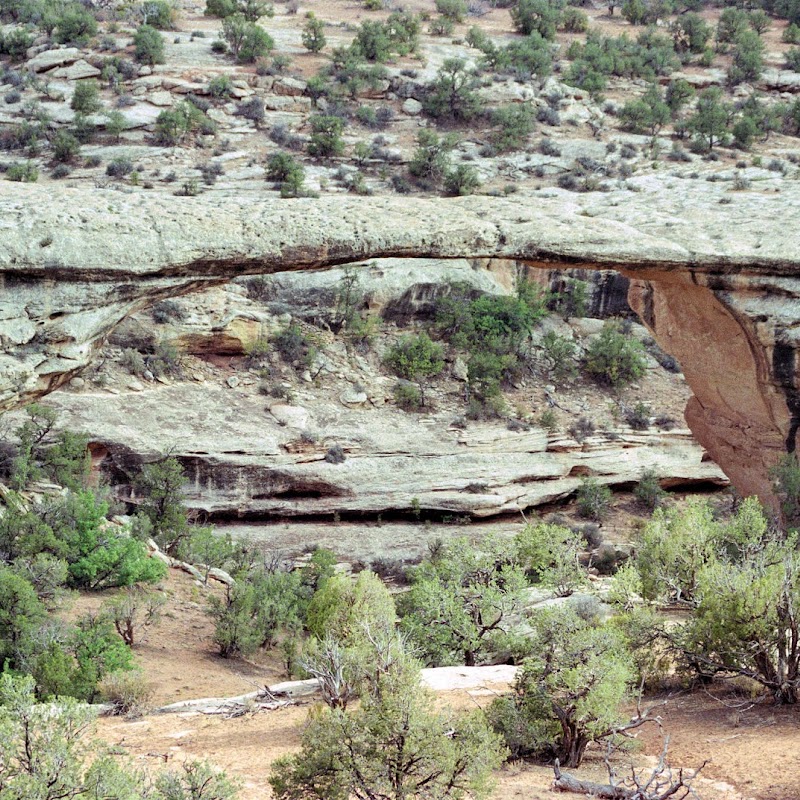 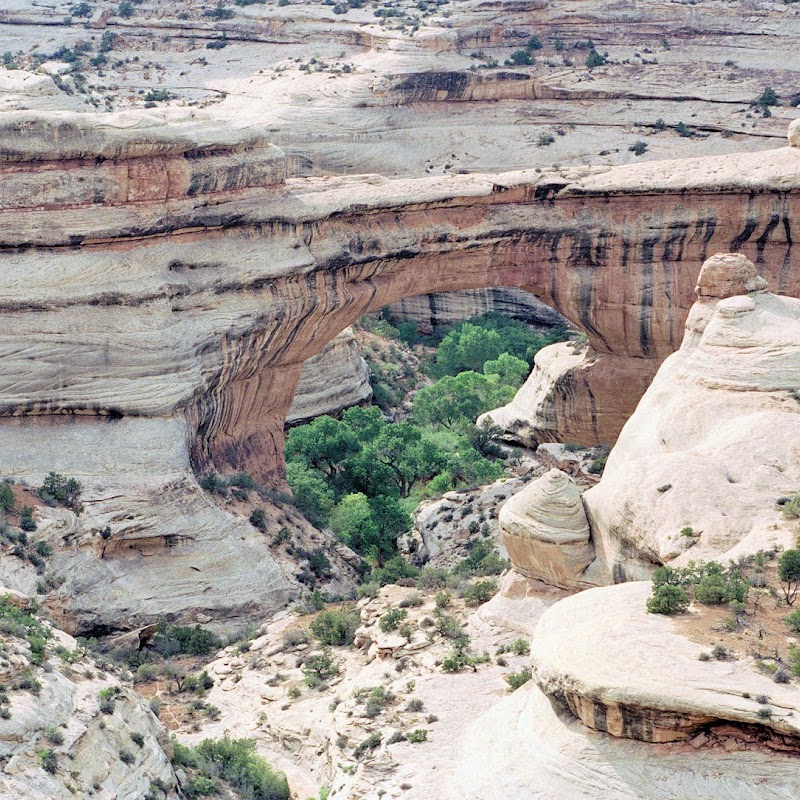 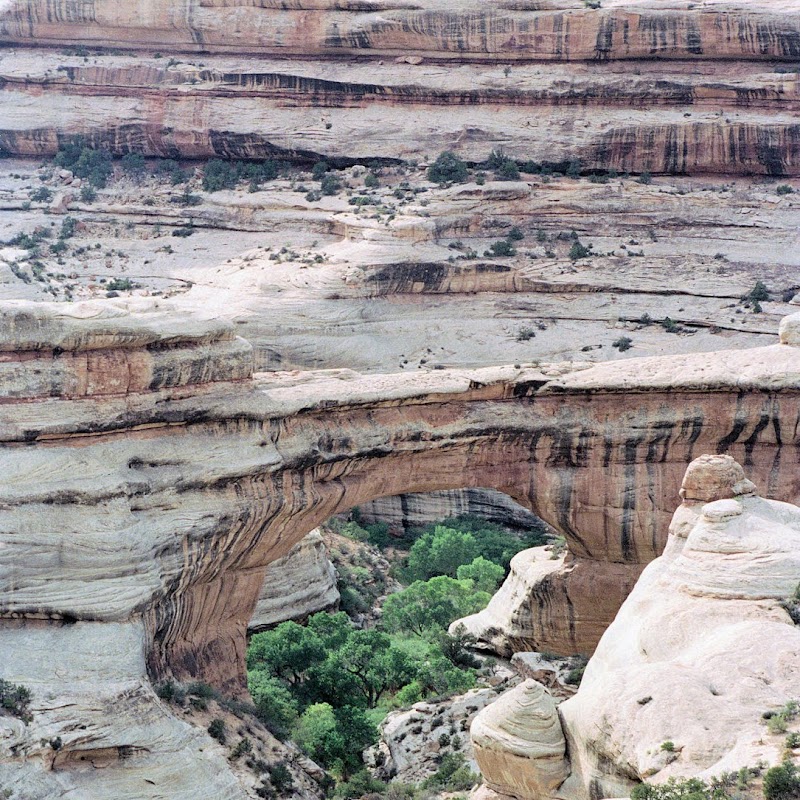 We planned to go to Mexican Hat for the night, but the roadmap showed a worrying looking unpaved section in the middle of the most direct route – Utah 261.  We consulted with the friendly park ranger again to check this out.  He told us it was indeed unpaved, but perfectly safe ( even if the rain starts ) and was worth the drive because of the view.  Well, you’ve got to respond to a challenge like that – the most direct route is the most entertaining.  Once again, Kas was at wheel when we got to do some off road driving. 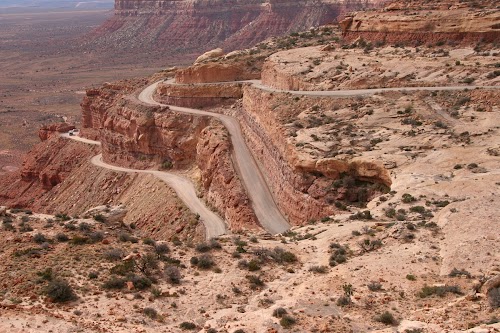 This was probably the most bizarre piece of road we’ve ever been on.  It’s called the Moki Dugway. You are quite happily trolling along a flat straight paved road with not a care in the world, and then you suddenly appear to have reached the edge of the world.  There are a few signs warning you that the road goes unpaved for a bit, and there is a bit of a steep descent on the way.  What you can’t see from the top is where the road actually goes.  That is, of course, until you actually get there.  You drive off the paving and around through a bit of a cutting and then you suddenly find yourself uttering a prayer very heavily based around the idea of brakes.  You are driving down the side of a very steep and very high cliff.  The height from top to bottom is measured in thousands of feet, and the road has basically been engineered by driving bulldozers and motor graders continually up and down, backwards and forwards until the cleared patch is wide enough to get two cars passing each other.  You get the distinct impression if you came back the following month, the road would take a different route.  And nestling at the bottom, on what looks like a flat plain, is a narrow strip of black stuff heading off into the distance.  It’s as if there was a really massive earthquake which created a 1100ft shift between north and south cutting through the existing road, and the highways maintenance crews haven’t quite repaired this part yet.

The road at the base actually wasn’t that flat, it’s just flatter than the part over the cliff.  This left us with a relatively short 10 miles or so down to Mexican Hat, the closest settlement to Monument Valley.  It is quite a small town, just one street with a couple of motels, gas stations, stores, and the like, and a couple of smallish housing areas set back off the main road.  All the buildings down the main street have parking which is basically just a packed earth verge at the side of the main highway.  You can drive nearly from one end of town to the other by just staying on this verge.

There are a couple of hotels, but the Moon Guide wasn’t much help, so we plumped for the second one we passed and pulled in.  It proved to be the cheapest place we stayed and also the most basic.  Still, it had a bed, shower and air conditioning, so what more could you want.  We cleaned up and headed out for some dinner.

The place we chose was a steak bar, outdoors and very much at the side of the road.  It was the home of the “Swinging Steak”. The floor was the same packed earth around the outdoor tables and bar.  This proved very shortly to be a limiting factor on their business this night.  Just after we arrived, the second thunderstorm of the night attacked, and we moved quickly from an uncovered table to a couple of stools against the bar.  There were a surprisingly large number of other people there, and also a large dog which was camped underneath our seats to escape from the buckets of rain pounding off the roof.

The menu was limited, but pretty well done.  The basic form was that you choose a type of meat ( mainly steak, but some chicken options just in case ) and a quantity.  This could be accompanied by salad and potatoes/rice in a selection of styles.  Beer appeared magically from a small fridge behind the bar. Salads and potatoes came from a kitchen inside the building. The meat was hacked off a huge lump and prepared by the guy at the barbeque, right there in front of you ( and thankfully underneath the same piece of roof as we were – we wouldn’t want a soggy steak ).  The barbeque was not just you run of the mill steel bars over hot charcoal affair – no indeed.  This consisted of an overlarge fire box, which was necessary to get enough heat into the meat as it swung backwards and forwards on a large metal grille tray attached to a large metal bar by some lengths of steel chain.  “Swinging” indeed. The chef was responsible for all aspects of meat management, from preparation to fire management and oscillation.  The steaks were definitely good and the beers were cold and wet.

This just left the final event of another long day, the walk back down the verge to the motel, getting muddy stains all up our trouser legs as we went.