Isn’t the weather in San Francisco bizarre ? It’s 60F and this is a mini heatwave, apparently. We were warmer at home. Anyway, it’s sunny and there aren’t any clouds, so it can’t be that bad. We dressed for a summer day and headed off to find out what San Francisco has to offer the recently arrived tourist. 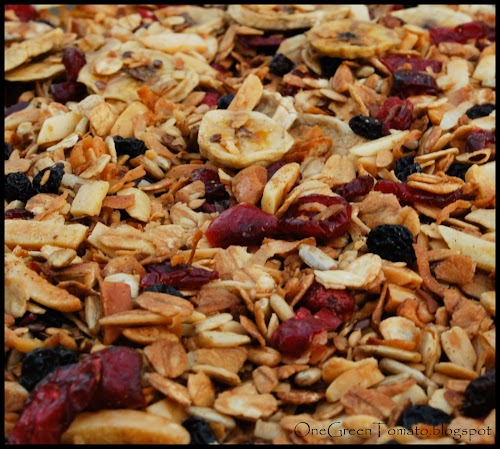 The first thing it had to offer was breakfast at a little coffee shop on the corner of Powell and Sutter. This was our first introduction to the American concept of choice in its full glory. We spent ages holding up the queue while we were working our way through the substantial menu. We can’t remember the name of the place but whatever it was, the home made granola was excellent, and the muffins amazing ( especially the chocolate ones ). Translating the various forms of milk into English from American was the next challenge, but once we established that half-fat = semi-skimmed, we were well away.

Suitably stuffed, we began the next phase – shopping that we might have done at home, but thought might be cheaper in the US. Kas wanted a telephoto lens for her Minolta, and I wanted a wide-angle zoom for my Canon. Some trudging was done in the downtown area, and a number of suitable emporia located. However, the huge price savings promised on several websites proved to be entirely fictional, and we were also introduced to the American practice of showing a price on the labels and then adding on the tax afterwards. It’s not that this is a bad practice, or a particularly shabby one, it’s just that we Brits get used to the labelled price being the same as the amount you pay, so it’s confusing when Americans do it differently. Eventually we both got what we wanted for about the same price we would have paid back home, so I suppose we ended up neither winning nor losing, and it occupied a portion of the morning with an essential learning experience which proved useful in the following three weeks.

So another return to the hotel to pack the camera bags with our new goodies, and off to explore the city.

Being British, and seeing as it wasn’t actually raining, we decided to explore on foot. We walked over through Chinatown and just sort of kept going downhill all the way to Fisherman’s Wharf.

Did we have lunch somewhere here ? Neither of us can really remember. However, we did go into a tourist information office and ask about buses to the Golden Gate Bridge. The guy thought we were insane because we walked from downtown ( but it’s only a couple of miles and most of it is downhill ). OK, so the walk isn’t the most prettified, touristy part of the city, but we’ve been to worse, and anyway, you have to pass through the average, quiet, residential bits to truly to appreciate the spectacular bits.

As we walked the several blocks to find a bus going towards the bridge we passed Fort Mason, and then drifted around a bit until we found a very helpful local lady who advised on how to pay for the bus. 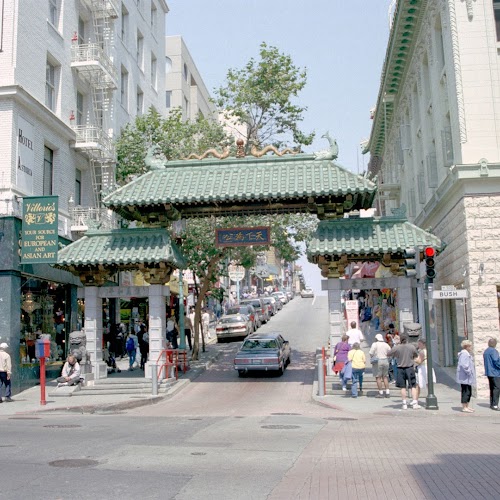 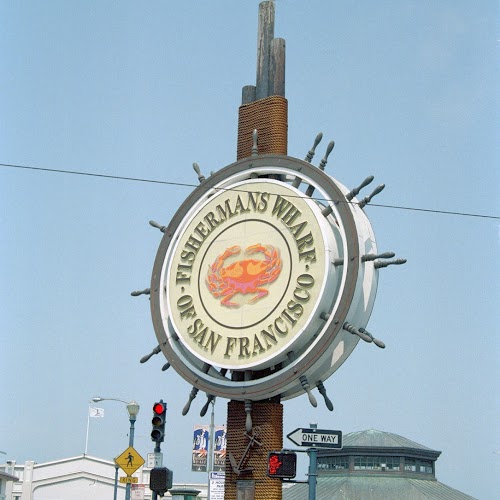 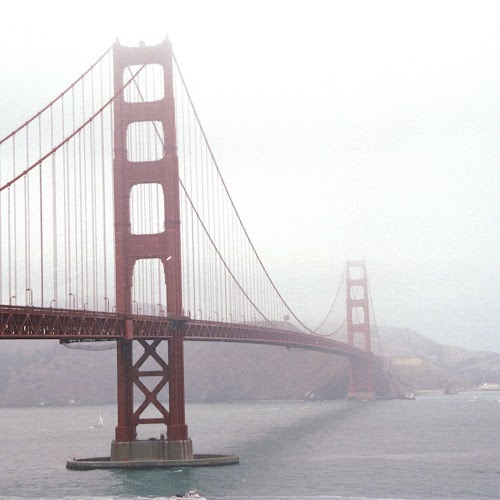 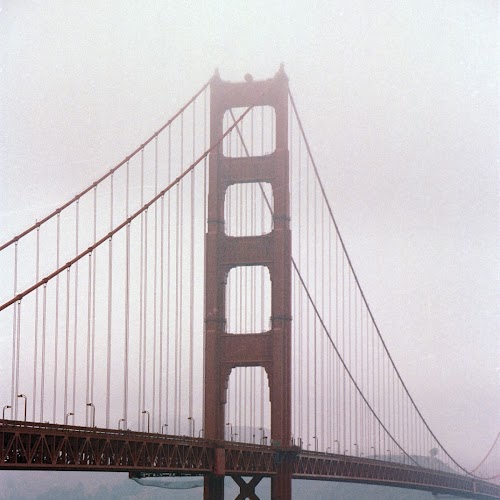 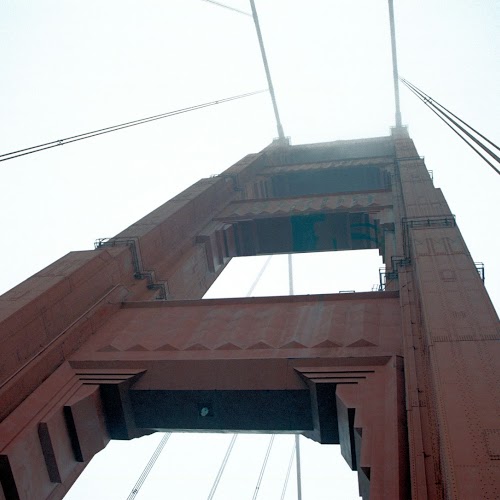 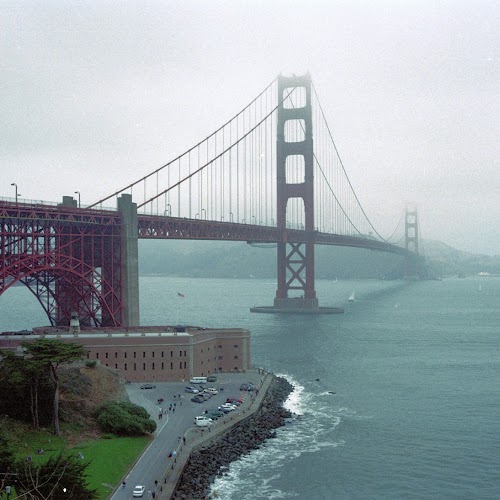 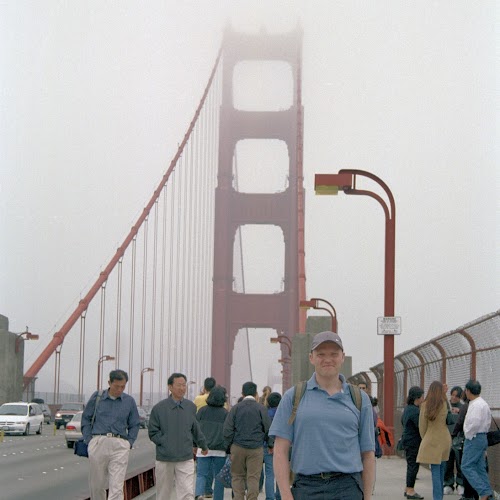 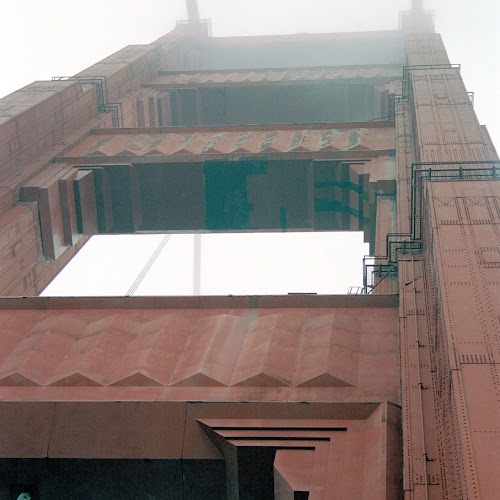 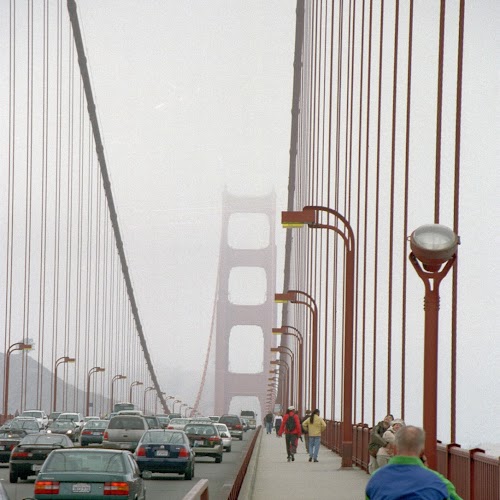 By the time we got to the end of Golden Gate, we had descended into a blanket of fog. And it was cold. As we were both dressed for summer, we decided that trying to walk across the whole of the bridge wasn’t the brightest idea in the world, so we just walked ( quickly ) over to the first tower and took a few arty photos of bridge, fog and wind. The wind on the bridge was strong enough to be photographed.

Another bus was caught and we found ourselves back in the sunshine, and back at Jackson Square, which we had passed on our great downhill hike that very morning. Both of us needed to be reintroduced to the warmer, caffeine and calorie laden aspects of American life, so a small independent coffee shop on the corner was too much to resist. OK, so we didn’t exactly try to resist very much.

Whilst drinking our skinny lattes and munching on our sticky cakes, we discussed the plans for the rest of the afternoon. Just outside, Coit Tower looked very close, and yet somehow on top of a very large hill. Undaunted by our earlier experiences and suitably warmed and refuelled we decided that we might as well climb the hill on foot. Public transport seemed convoluted and we both had good sensible shoes on, so off we went.

Tell you what, it was chuffin’ steep going up that hill, but our decision to walk up proved sound as we turned a corner and were greeted by a large queue of cars, buses and other malcontents trying to get up into the rather small car park. Maybe the occupants had actually just abandoned their vehicles halfway up the hill and decided to walk. There wasn’t much evidence of motion. 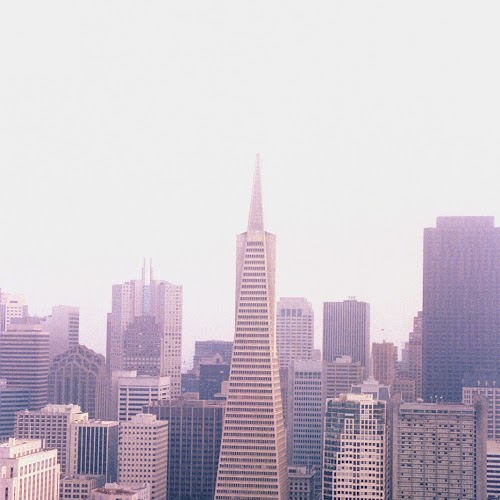 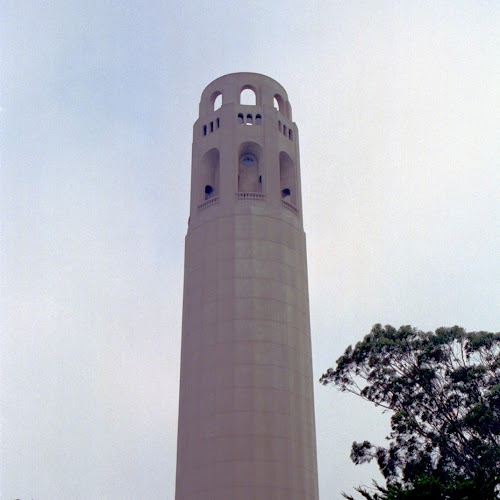 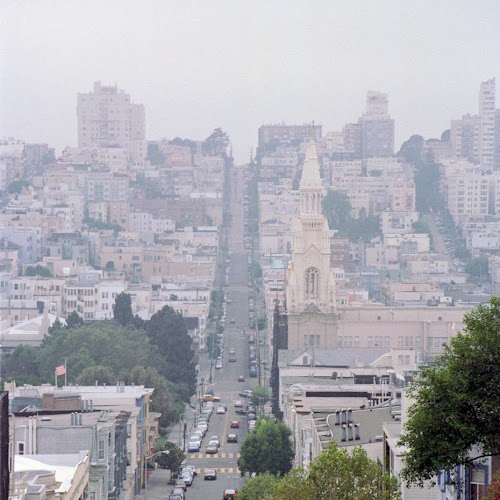 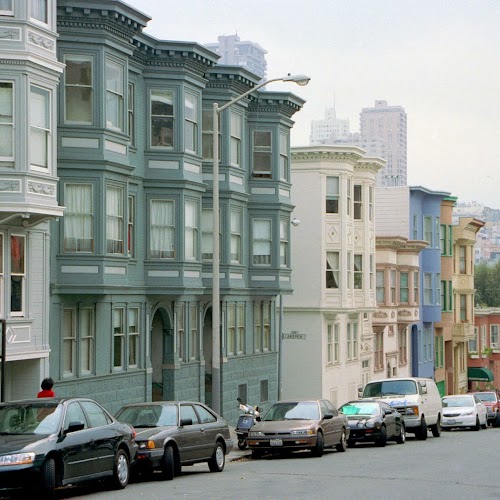 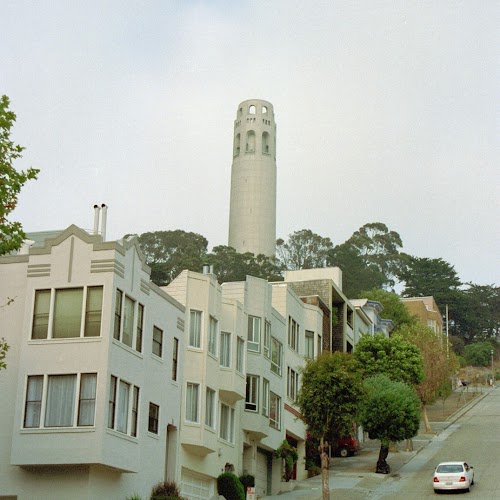 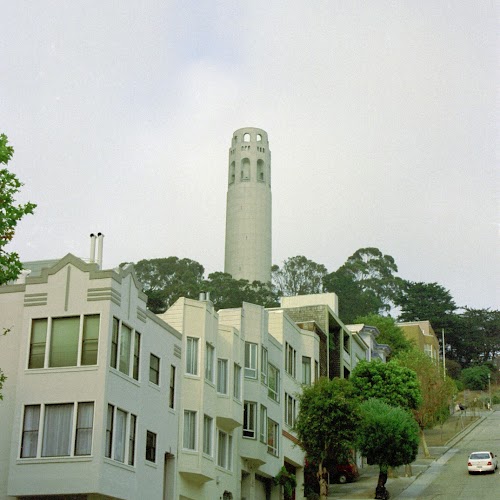 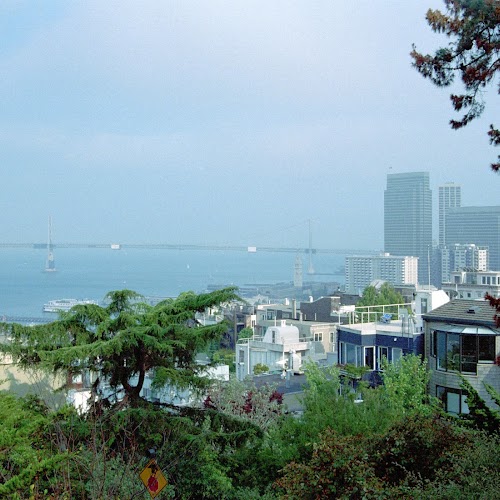 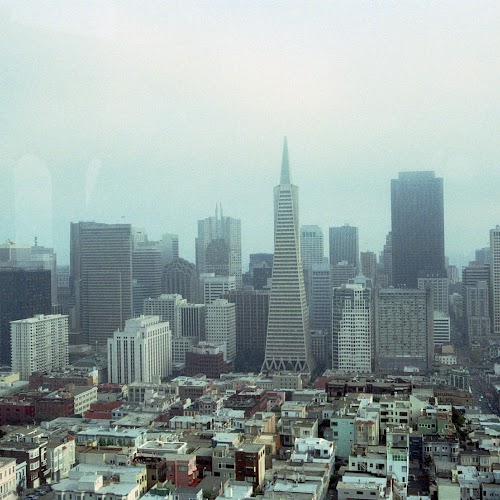 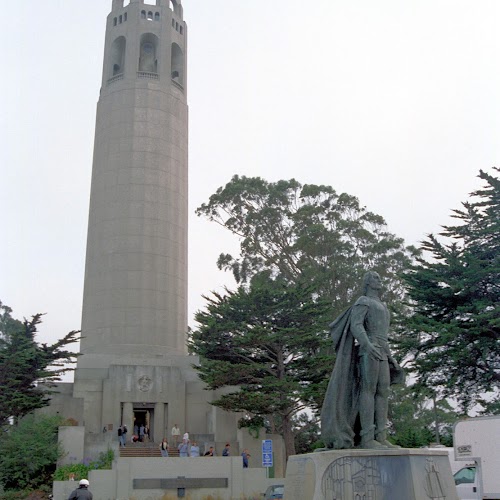 So we went up into the vaguely phallic thing and attempted to take photos of the downtown skyline, but the Perspex windows and general haziness outside meant that the photo shop had a devil of a job getting the prints to look good. Doh !

We then rounded off the afternoon with some more walking, this time trying to find a criss-cross route down the hill, up through Chinatown and back to Union Square. The walk was a bit smelly and sticky and busy, but we got home eventually.

Dinner was provided at a random location in Chinatown , selected by the tried and trusted technique of looking at the window menu, and peering through the window to ensure that there were enough people for it to be good, but not enough to make us wait ages for a table. From what we remember, the food was good and the beer was cold and wet. We felt satisfied with our first day’s efforts, and retired to our room without a view for a much needed snooze.