The Quality Inn  has a big open atrium area in which they serve breakfast.  It consists of an open buffet table of cereals, fruit, etc, unlimited tea, coffee and juices, and a special menu ( at slightly higher price ) to order hot food.  We partook of the hot option whilst making our plans for the day. 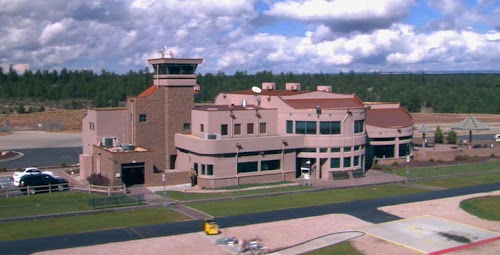 Grand Canyon National Park ( www.nps.gov/grca/ ) is very large, and has lots of things to do which were candidates for us.  The thing we were debating most was whether to take some sort of flight over the canyon while we were there.  It would be fairly expensive, but then we might never go again.  Grand Canyon Airport was very near the hotel, and the hotel had many, many flyers ( no pun intended ) from tour companies offering flights by light aircraft or helicopters of various lengths and prices.  To be honest, I’m not sure there was ever any doubt, it was more a matter of getting used to the idea that we would have to pay for it.  We plumped for a short-ish ( 45 minutes ) helicopter ride with Papillon ( www.papillon.com ) and we were lucky enough to get on a flight mid-afternoon on the same day.  Top stuff.

That left us with a long morning to fill in, and we had the urge to do some walking.  We hadn’t done a great deal in Monument Valley, so the legs were itching to get tired again.  We started with the usual park orientation visit to the main Visitor Centre, and picked up lunch and water, as you do.  We were heading for the South Kaibab Trail, which starts from Yaki Point, a few miles east.  The best bet seemed to be a bus from the central bus terminus jobby, rather than moving the car around everywhere, especially seeing as the bus stops were right outside the visitor centre and the car was miles away lost in a car park somewhere.  That’s the thing about Grand Canyon, it is very commercialized and very heavily visited, and as a result they have to have a lot of parking space at the Visitor Centre.  Many of the visitors just park up here, wander around the visitor centre and peer over the rim, and then go home again. 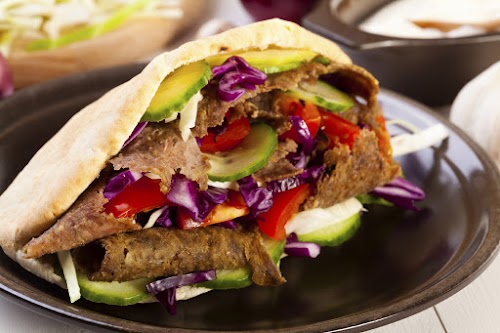 South Kaibab Trail proved to be one of the more entertaining walks of the holiday, although I did spend half the morning thinking about the similar sounding post beer stomach-filler-come-laxative.  It starts of rather steep and winding, and the opening section was nicely in shade when we started.  However, the shade soon disappeared, but the slope and corners didn’t.  Our normal water planning was thrown into confusion here as well, because the outward leg was downhill, so we had to change to allow most of the water for the trip back.  The tour guide said to allow about four or five hours for the walk but we were pretty fast going down, and reached a sort of halfway station on a little plateau with some basic toiletry facilities.  From here, you could stroll out onto Cedar Ridge and get a pretty decent panorama.  The walk into the Canyon is well worthwhile, and although I wouldn’t say you “must” do a walk inside to say you have truly been there, I would say that the view is much improved.  From the rim, everything is below you, and the angles are strange.  Because the horizon is dead flat from most of the south rim area, from the top the views all consist of rock against rock.  It must be very difficult to see what’s going on in flat or diminishing light.  When you get inside the canyon, you can see more of the perspective.  It becomes clearer which parts are close to you and which are far away, and you can see upwards as well as downwards.  It would be rather strenuous to get right to the bottom, so I’m not sure whether the view here is better, but certainly from halfway down you get a much better sense of both the scale and the beauty.

As we only took an hour or so to get down to Cedar Ridge, we assumed that it was going to be very hard work getting back out, so we set off in good time, and realized that the books were probably written to guide the average to unfit walker.  We found ourselves overtaking loads of people and getting back out in about 90 minutes.  This even included a fairly slow 20 minutes when we were walking and talking to Mervyn from Palm Springs, who was there on holiday but was struggling a little bit with both altitude and steepness.  Mervyn eventually seemed to almost apologize to us because he was holding us up, so we split up, and although we had to wait a while for a bus at the top, there was no sign of Mervyn.  So we hope you made it out of the canyon and we’re sorry we didn’t allow time to come round to visit you.

We got back to the car in time for some drinks and a quick trip back to the hotel before our appointment at the airport.  It was a proper flight, with all the regular check-in procedures.  We had to go through a safety briefing and there were proper boarding cards and gate control – the whole nine yards.  There were, however, only three passengers on the helicopter – well, there was a pilot as well, obviously.  I don’t know whether the pilot was telling the truth, or just fancied Kas, but she got to sit up in the front, while me and the Mexican geezer got to sit in the back to make sure “the weight distribution” was OK.  How much effect can the odd twenty kilos or so make to the balance of a helicopter anyway ?  Never mind. 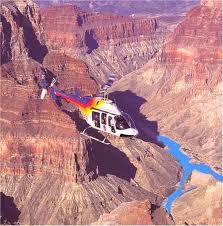 The flight itself was quite short (45 minutes),  but enough to get the hang of what was going on.  We flew from the airport to the west of Tusayan and over the canyon rim to the west of the park HQ.  The piped commentary on the headphones was a little cheesy, but was fairly informative.  The main sensation you get, however, is the distinct queasiness when you cross over the rim and the canyon is actually below you. You’re quite close to the floor and then suddenly you aren’t any more.  If you’ve ever been to one of those IMAX cinema thingies and they show the trailer of various vertical shots down from aircraft, well this was just as vomit-inducing, only for real.  Don’t go on flights like this if you are a nervous flyer.

The actual flight just took us right over the canyon to the north rim, and then the pilot played around with ducking up and down below the rim, so you got a similar perspective as if you had walked in.  It wasn’t the most heavily visited area of the park, because there aren’t any trails from either north or south rim in this area, so you get a bit of an “unspoilt beauty” effect, but it also didn’t seem like that long a flight, and we could have coped with maybe twice as much time.  It’s probably better than the day trip flights you get from Vegas though, because you get a high proportion of close-up canyon per unit flying time, and I think the ones from Vegas have to fly a bit higher. 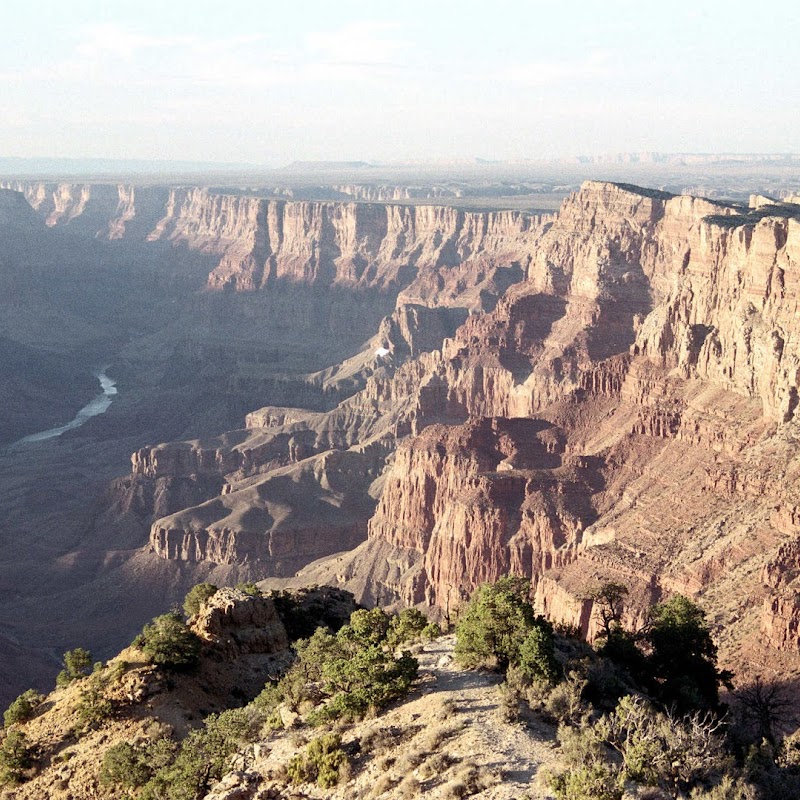 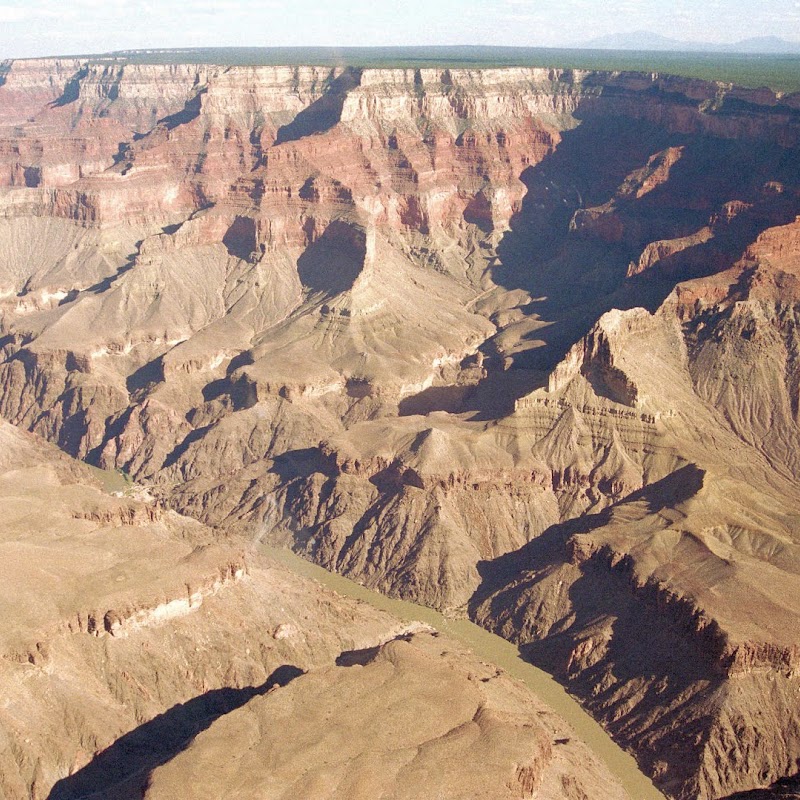 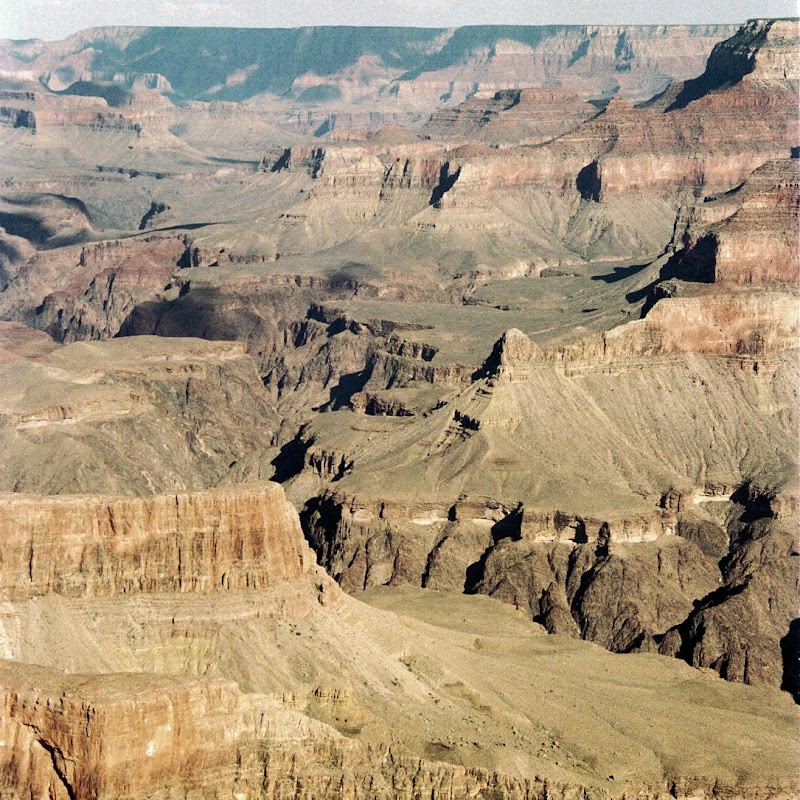 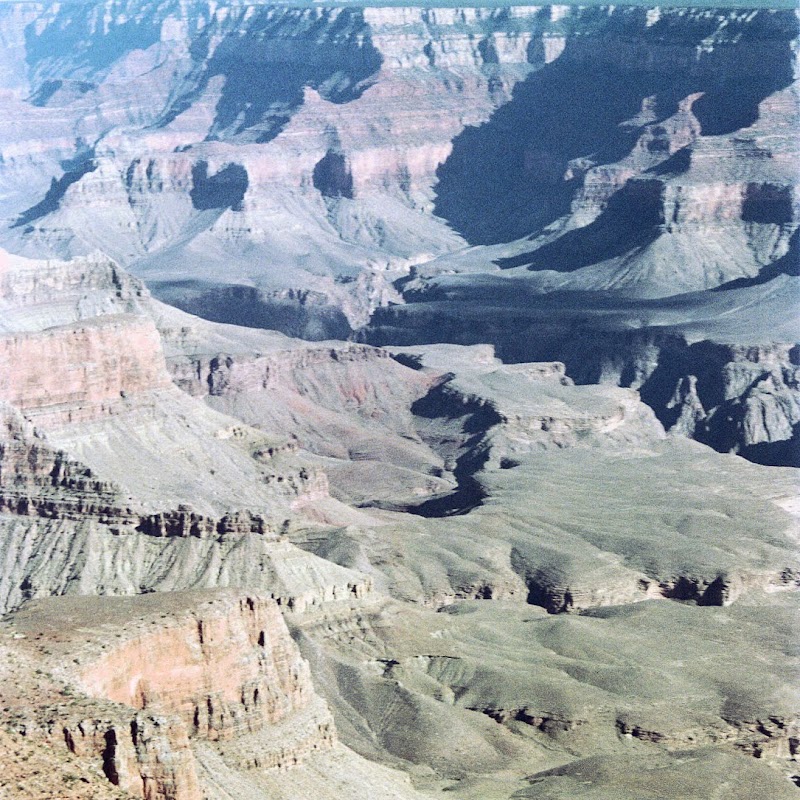 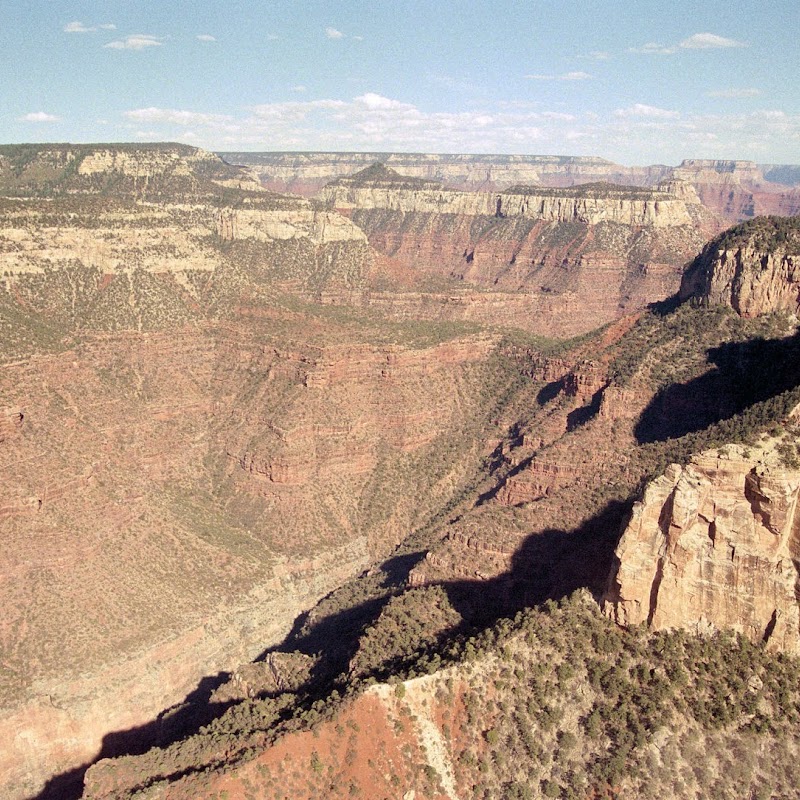 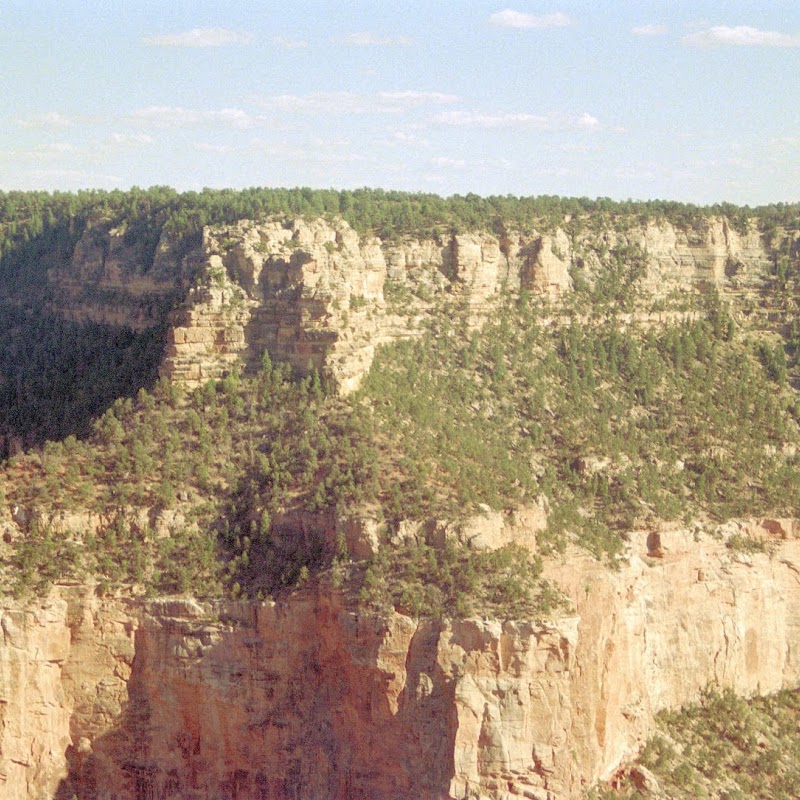 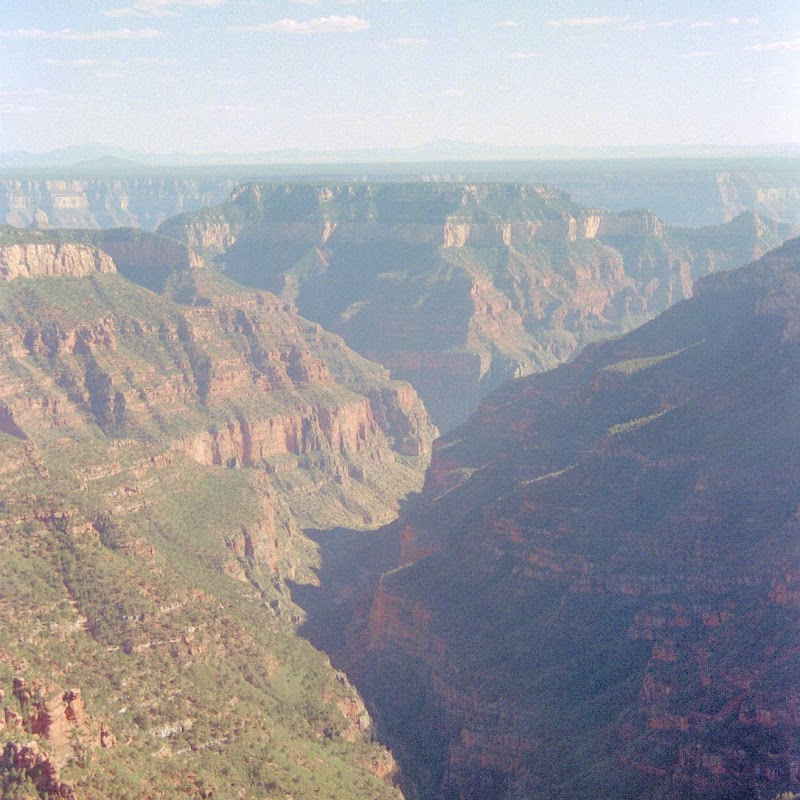 After the flight we chilled for a while and then headed off for some sunset viewing.  We asked the ranger at the fee station for an opinion on where was best, and he suggested we go all the way over to Desert View, some 30 miles away.  We had a fair while before the actual sunset so off we went.  Kev had been to GC on a previous visit and was looking for the same place, but couldn’t remember which overlook it was.  However, on arrival, it definitely wasn’t Desert View.  Nevertheless, it was a pretty romantic spot to watch the sun go down despite the fact that it was quite busy.  We sat there until is was very nearly completely dark, and we were sitting on rocks right at the edge, to the side and in front of the proper paved area, so it was challenging getting back to the car.  However, we made it back safely and Kas turned on the waterworks in the car on the way back.  She eventually convinced me that this was the release of lots of built up excitement and happiness, and she was just really, really happy as if you’ve just done something you’ve been dreaming of for years.  In fact, this was something we’d both been dreaming of for a number of years.  A couple of years before we had planned, and then failed to book this trip because it was going to be too expensive.  When we finally did decide we could afford it, the trip was nine months in the planning and the excitement levels had been building up to fever pitch as the holiday got nearer and nearer.  In the end, then, it’s not all that surprising that the emotion eventually came out, after all we’d been into the canyon, flown over it and watched the sun set over it all in one day, and it was one of the best days of our lives.

We finished off this excellent day with a trip over the road to a restaurant in a sort of western style – you know, denim skirts and red & white checked blouses for the waitresses, string ties for the chaps, and so on.  We started off badly, because our waitress wanted to see some ID for Kas, believing she was underage.  OK, she’s younger than me by a few years, but was still 28, and if I claimed she looked under 21 I’d probably get a slap for a particularly poor attempt at flattery.   Thankfully we had our passports with us, so once the necessary verification was performed the waitress was all sweetness and light again.  The rest of the meal went well and we came out suitably stuffed.