The wedding party in the basement proved not to be that noisy, so we got a decent night of sleep and got up fairly early again and went for breakfast.  There were a few people from the wedding party enjoying a hungover morning repast of coffee spiked with alka-seltzers.

For the morning, we were obviously well placed for going to Hoover Dam, being just a couple of miles away.  The new visitor centre cost more dollars than the original dam, apparently.  That’s inflation for you.  It looks good and blends in as well as it’s possible for copper and smoked glass to blend into rocks.  There’s a few visual displays on the top level, but for the full experience you have to do the tour.  You watch a film about the history of the dam and the sacrifices of the workers who built it, and then you get to go down in an elevator to the bottom, walk along a bit of tunnel, and then peer out over the Nevada powerhouse.  Great for black and white photos, and still impressive looking.  After the tour we walked across the top and took photos of various bits.  We walked to a different timezone in Arizona and took photos back to the visitor centre, and then walked back and peered over the front edge to get a truly vomit inducing view down the front face.  All I can say is, I’m glad I didn’t have to mix all that concrete in my wheelbarrow at home.  By the way, do they clean the front face of the dam to keep it looking such a pristine white-grey colour ?  It looks very spangly and new for a 80 year old lump of concrete. 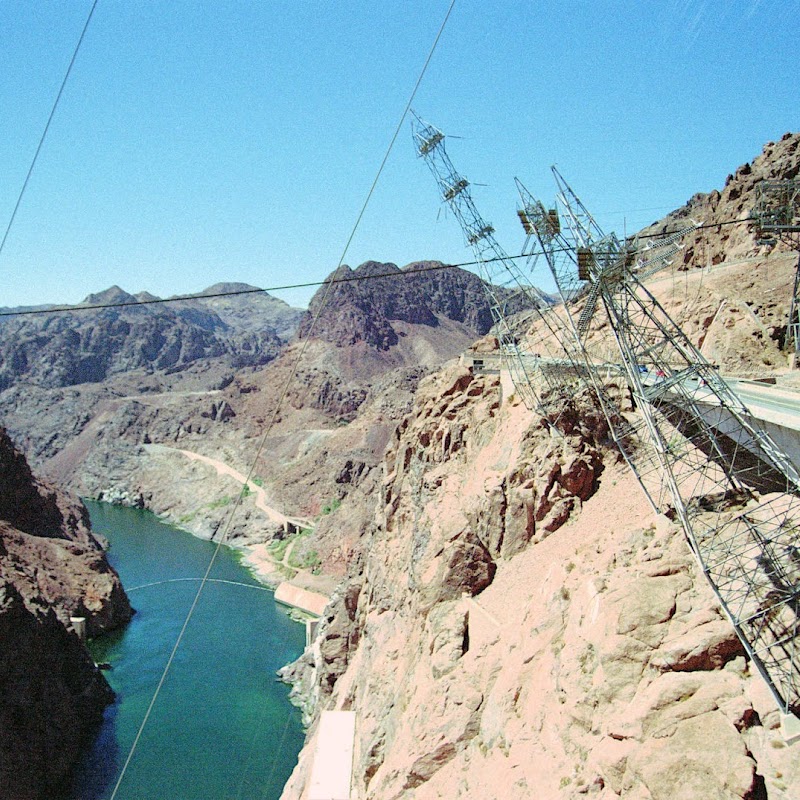 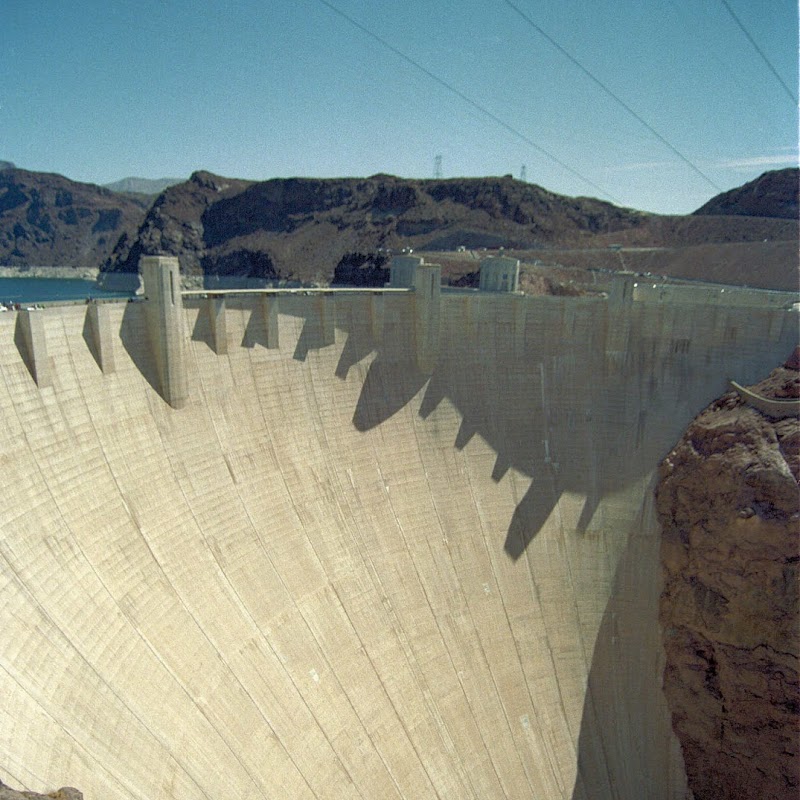 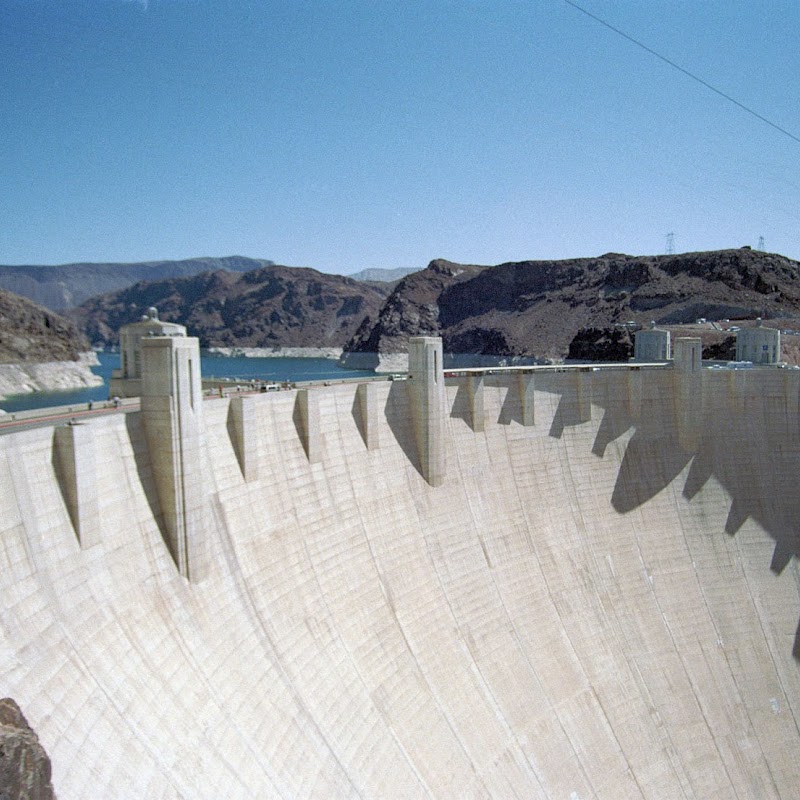 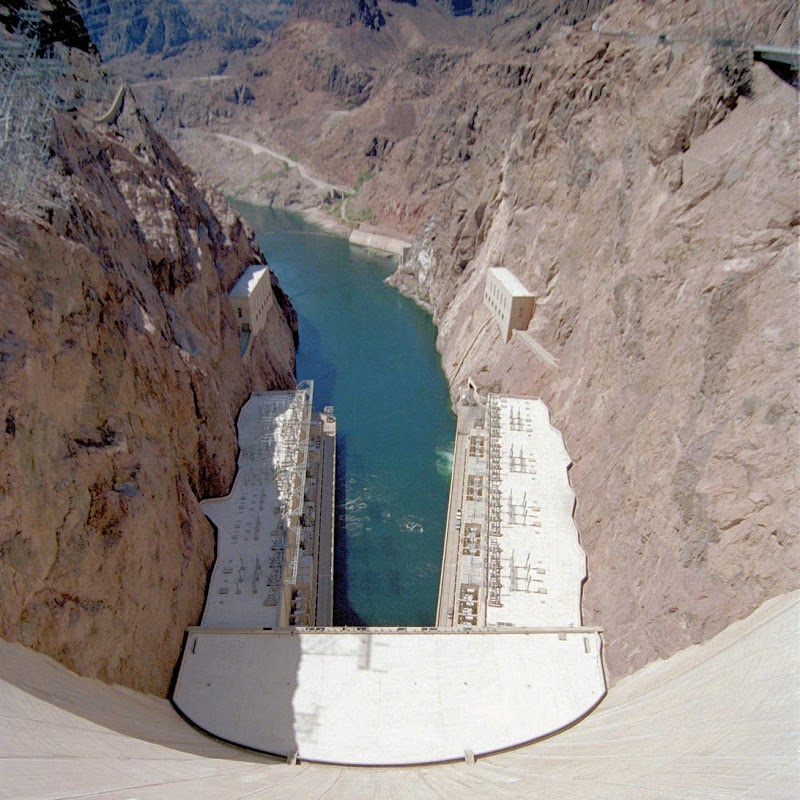 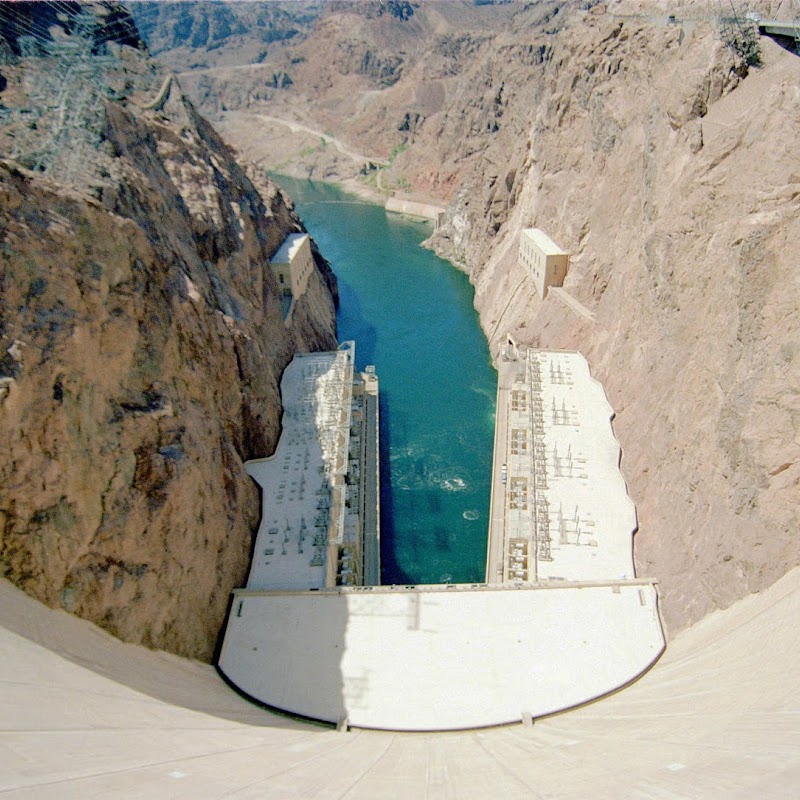 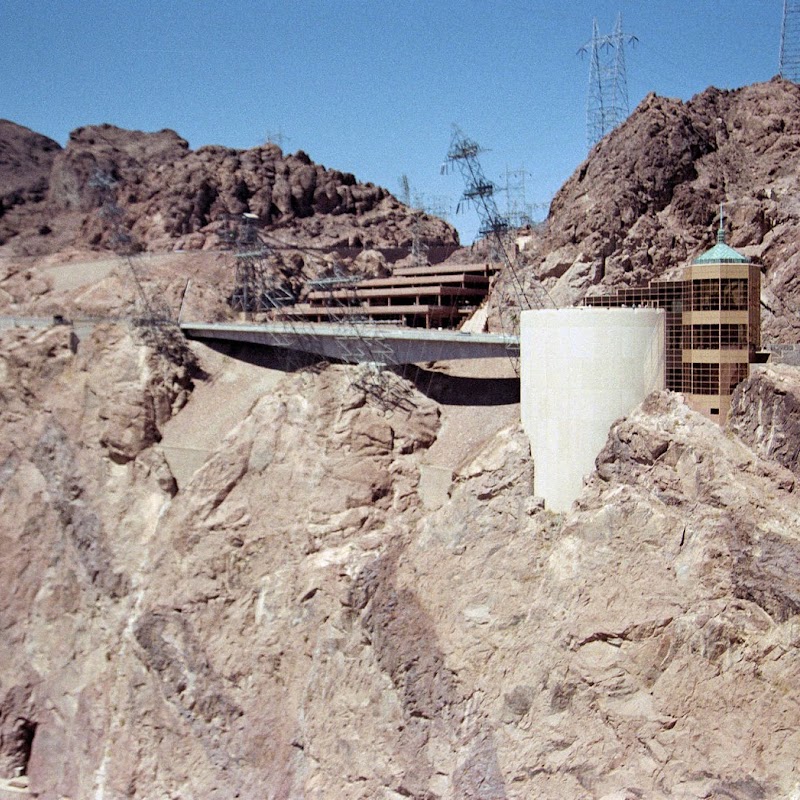 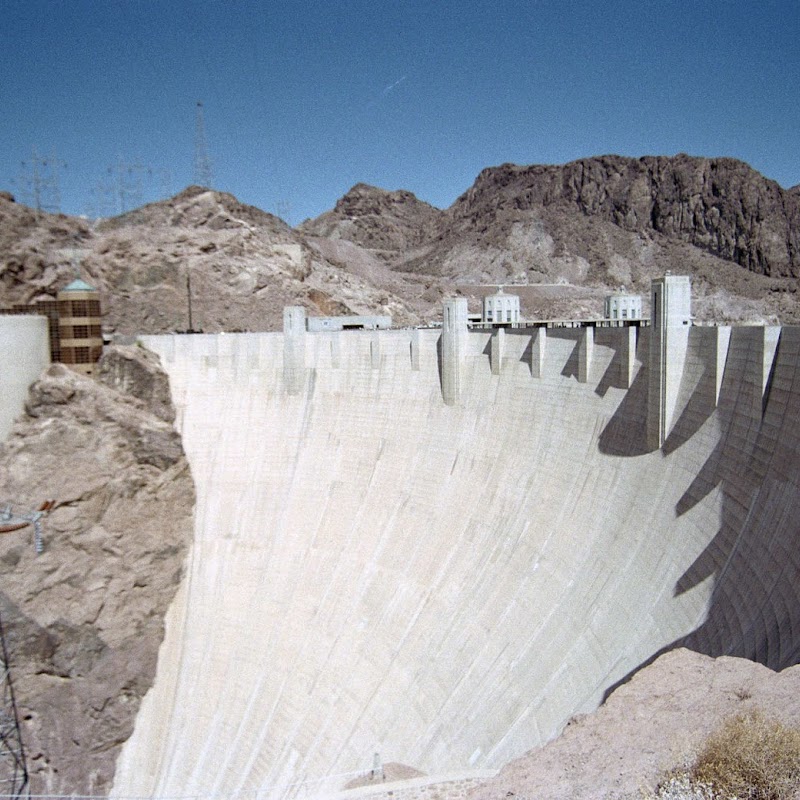 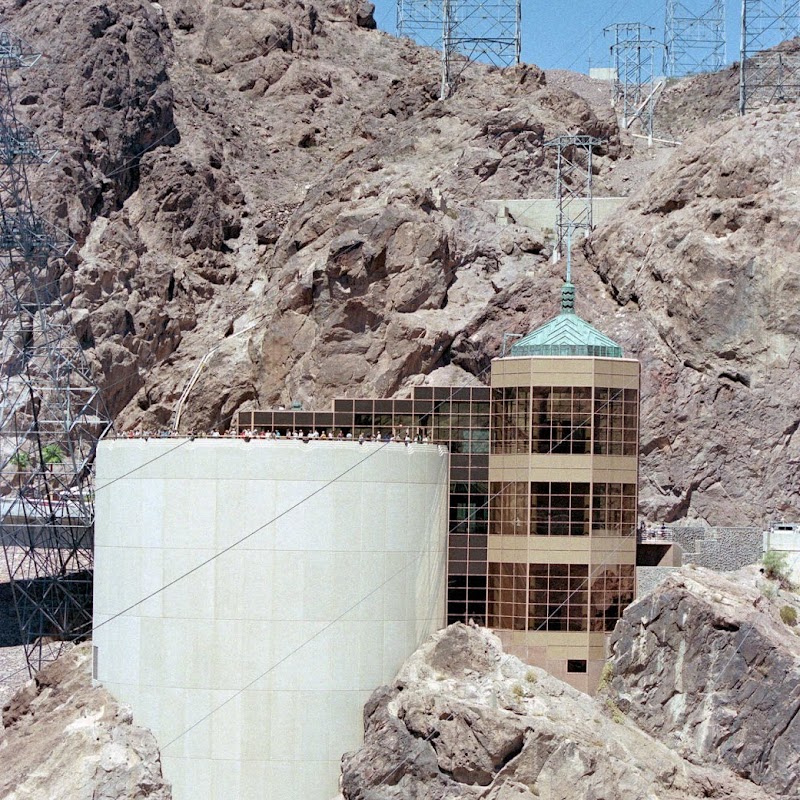 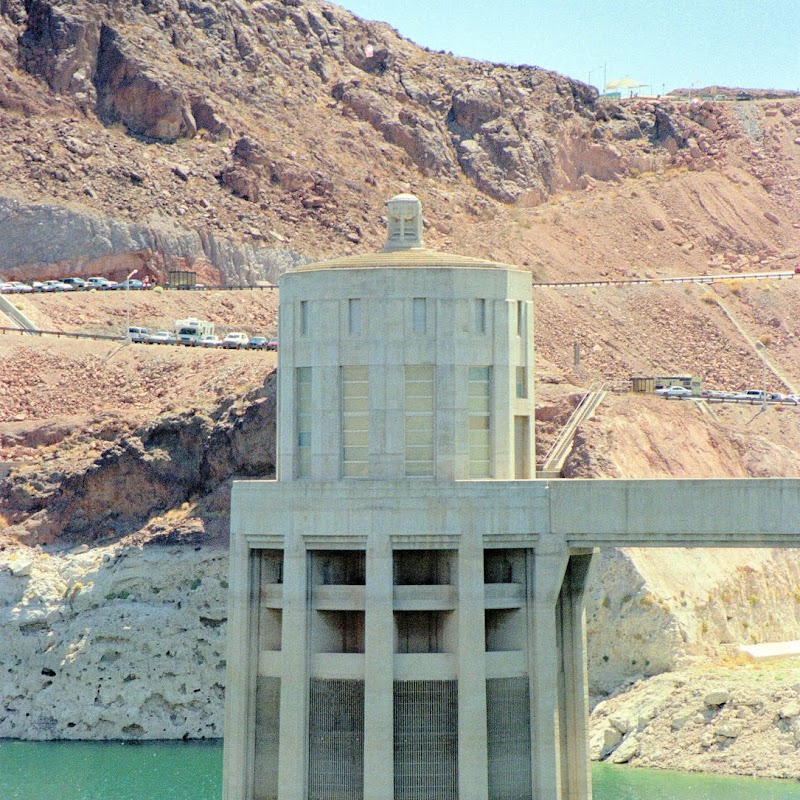 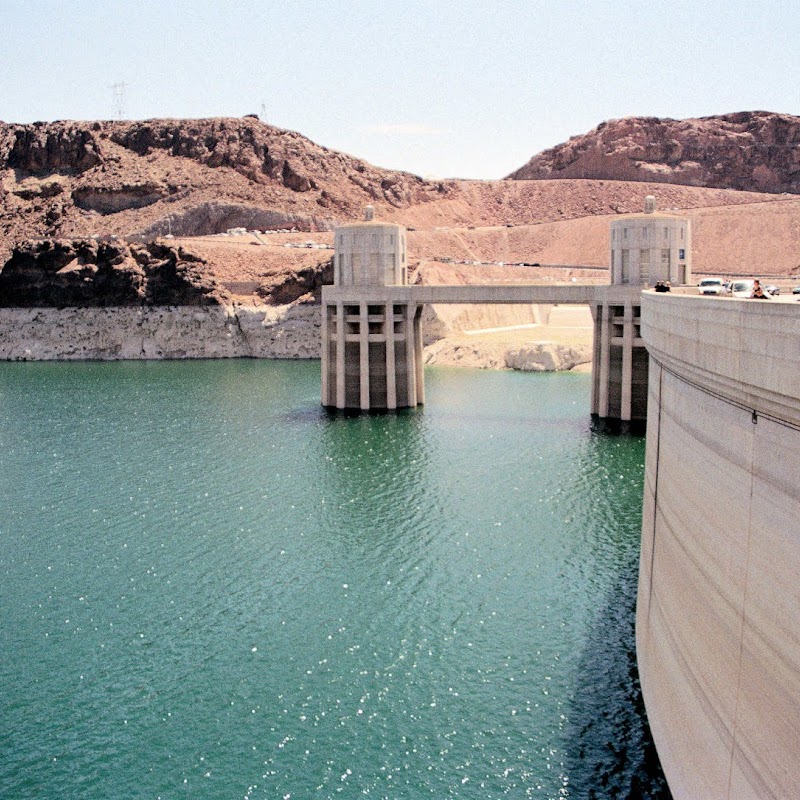 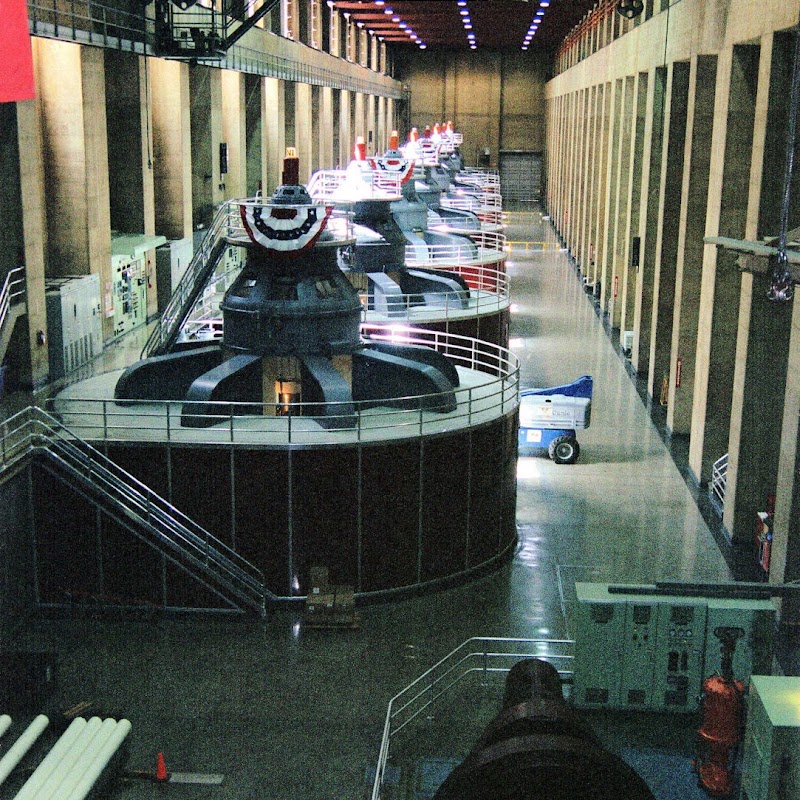 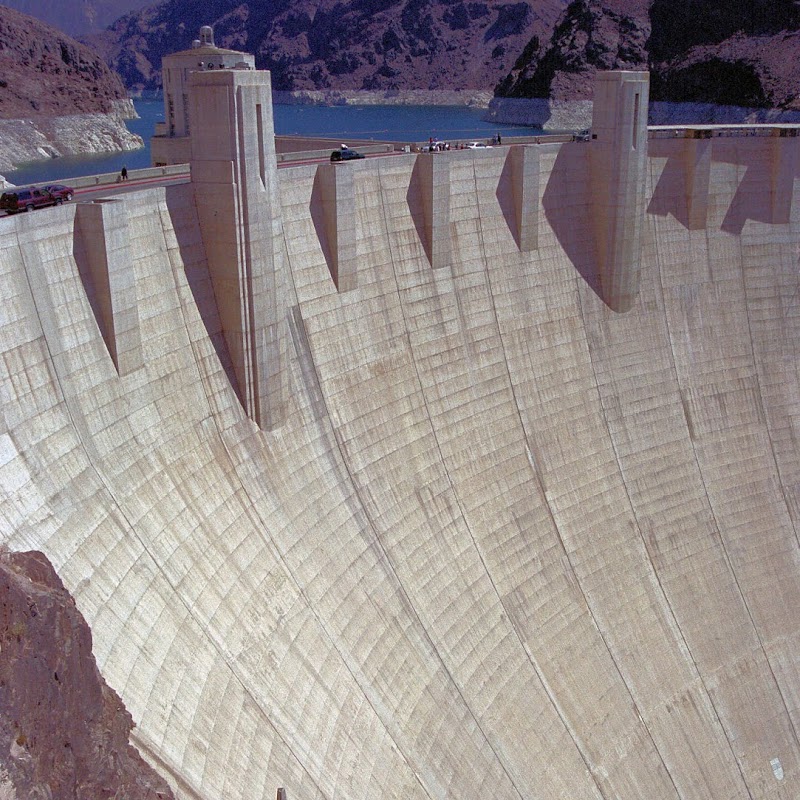 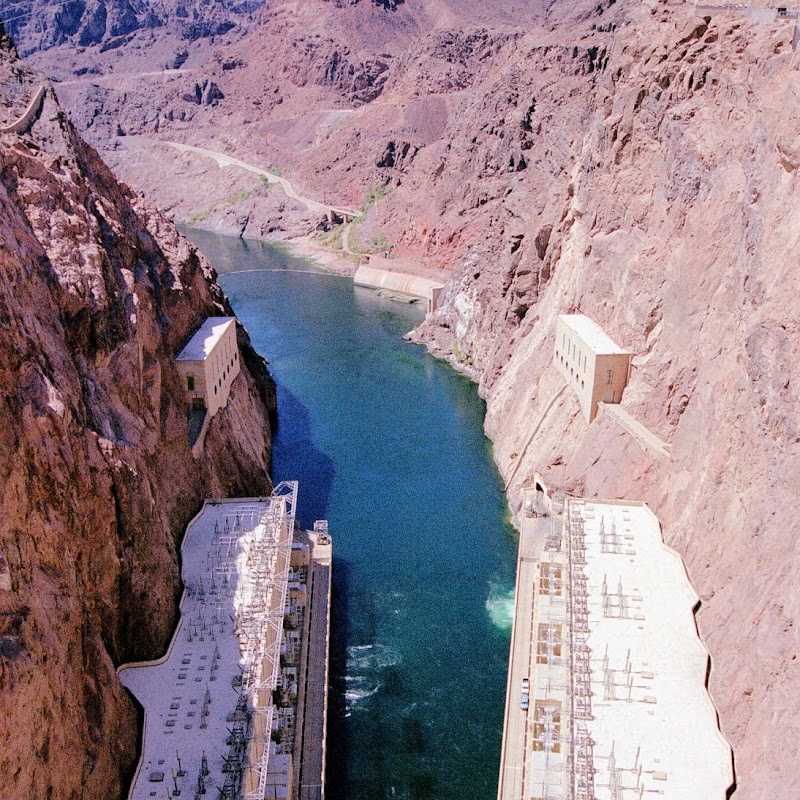 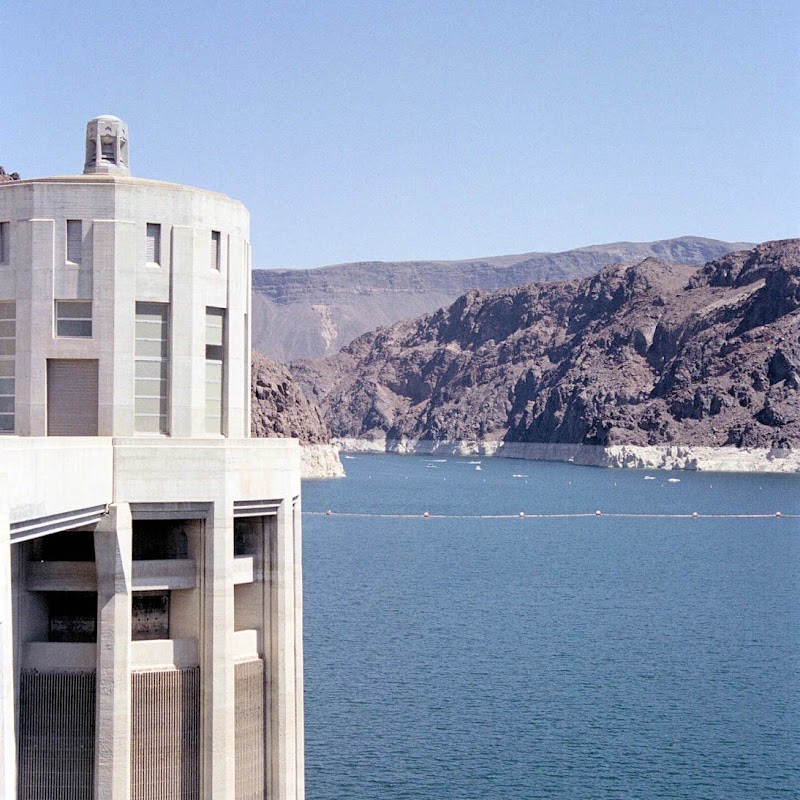 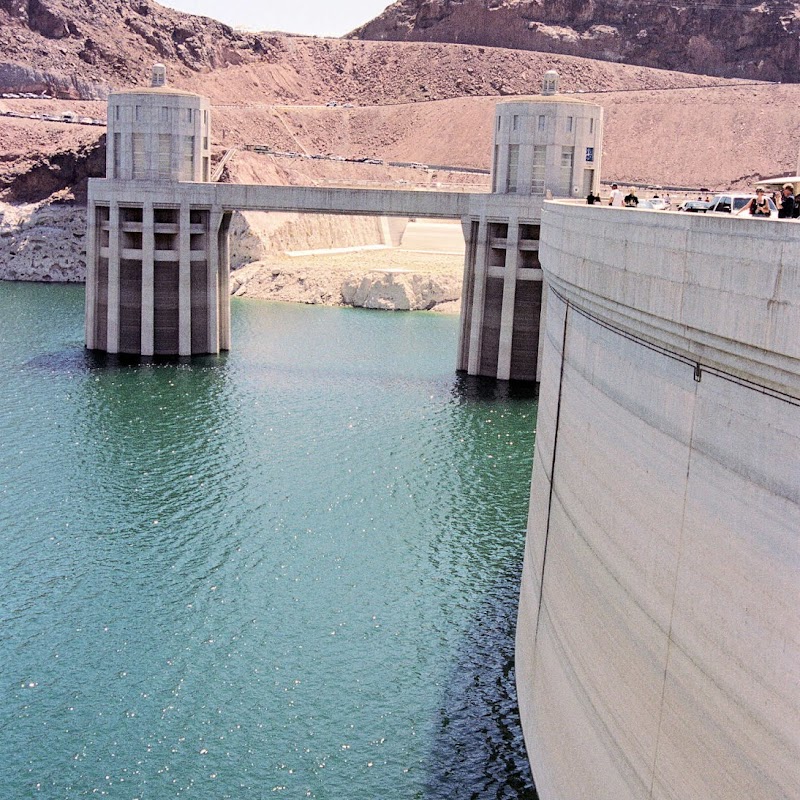 Over on the Nevada water inlet towers, a ranger was giving a talk about water management.  He explained how all the spillways worked, and what they deemed to be a sensible water level for Lake Mead, behind the dam.  It looked fairly empty to us, there was a distinct dividing line around the rocks at the edge.  White rocks where it gets wet in the spring, and red where the rock is constantly above water level.  There was quite a lot of white.  Apparently, though, they don’t like it too full, because they don’t want to have to spill water over the sides.  Bit of a waste, that.  So empty is bad, but full is bad as well. It’s amazing to think that most of what you see in the American desert between Denver, Salt Lake City and LA is powered and watered by this dam, and a couple of others further down.  Pretty useful thing, the Colorado River, everyone should have one.  And not only does it bring water and power ( and thus air conditioning ), there’s also a nice lake hosting a variety of watersports ( www.nps.gov/lame ).  It also seems a bit funny that a large proportion of that cheap, environment friendly power gets used up in illuminating massive neon signs which entice people into cool darkened rooms where they pile masses of quarters into machines that say “thank you” by means of a few silly flashing lights and bleeping noises.  Did the guys who put all that time and effort into building the dam know that it would go to power the world’s biggest gambling den.  OK, so Californians, Arizonans, Mexicans and others use their share for more earthy, wholesome pursuits, but we all know where they go to spend the profits they make from those wholesome pursuits.  Aren’t humans wonderful things, we turn the desert into a place where old people retire because the weather’s always fit for golf and where the main tourist attraction is a cool dark room full of slot machines.  Don’t get me wrong, I don’t think there’s anything particularly wrong with this, each to his own as it were, I just think it’s a bit bizarre.

By this time we’d had enough of water retention, as it were, so we looked round the souvenir shop and then jumped back into the trusty RAV4 and headed on towards the next destination.  We’d decided that we still wanted to go around the top of the Grand Canyon and maybe come back to Vegas later on.  We’d still got two whole weeks of holiday left, so we thought we weren’t in a rush.  This meant we headed back to Vegas and then turned right on Interstate 15 heading for Utah.  The plan was to get up to Zion National Park ( http://www.nps.gov/zion ) by evening.

I-15 through Nevada was a bit dull, and the highlight was stopping at Mesquite for fuel and ice creams.  This is the last chance to spend a few more quarters before you get to Utah.  As you approach the border. You first cut across a tiny corner of Arizona, and you start to climb through some big hills.  This is a very dramatic piece of highway engineering which brightens you up after the apparent miles of nothing in Nevada.  You eventually reach Utah and then start descending again.  We ducked off the interstate and turned east towards Springdale.

Our Moon Guide for Utah is a rather old version, printed well before a previous trip of Kev’s in 1994.  I assume it has been revised since then, and I hope the revised version has a better description of Springdale.  Our book described it as a small Mormon settlement on the edge of Zion NP, and that was about as far as it went.  The reality is that Springdale is a reasonable sized town, with any number of motels, shops, restaurants and other amenities.  OK, so most of them are there to cater for tourists, but then that’s the point, isn’t it.  If you’re going to be a small town near a national park, make sure you have plenty of places for visitors to stay and to eat.

We checked into one of the many motels, but can’t actually remember the name.  It was roughly in the middle of the main street, and had all the usual features, such as two storey accommodation blocks, and a small pool.  It also had an internet connection in the lobby, which proved useful.

It was still fairly early when we had finished checking in, so we dumped the bags and headed off for the traditional park orientation visit, to the main Visitor Centre just outside Springdale village.  After collecting all the free newspapers, guides and info available we decided we had time for our first trip up into the Zion Canyon as well, to get our bearings and do a few of the less strenuous stop-offs.  It was getting to be early evening, and the shadows were lengthening in a very artistic way.

Zion National Park ( www.nps.gov/zion/ ) has a very convenient shuttle bus service in the summer.  It’s convenient for two very different reasons.  Firstly, you can’t take private cars up into the valley during the summer months, so unless you like very long walks it’s the only way to go.  Secondly, it’s very convenient because there are lots of stop-offs and the buses run every 5 minutes or so during the middle of the day, so you don’t have to waste much time getting around the place.  We decided the best ploy was to head for the far end, and work our way back down.

Sadly, the final section of road up to the Temple of Sinawava was closed when we were there.  The road was being re-surfaced, so the buses couldn’t get up there, so we got as far as the short hike up to Weeping Rocks for our first stop.  The name gives the game away here.  There is a shortish hike up the side of the eastern valley wall and you come to a curved overhanging section of valley wall, out of which drips water which has presumably rained onto the top and has taken some time to permeate through to this level.  The effect is eerie, because it is fully shaded most of the time, and so the damp and shade contribute to flora which are definitely wet marginals, rather than the much drier tolerant things elsewhere in the valley.  It was getting quite dusky by this time, and there was a fair amount of company for us going on this hike, so it was an ideal hike because it suited close up photography of the plants and rocks, rather than sweeping vistas.

We then jumped on the next bus going downhill, and jumped off for the very short hike up to the viewing platform for the Three Patriarchs.  A few good shots over three big mountains, but the light was fading fast, and was beginning to get too dark, so we resolved to come back again the following day, and beat a strategic withdrawal to the motel, where we took a refreshing dip in the pool.

We weren’t sure what to expect for dinner, so we went out with an open mind.  I don’t know whether Springdale is still a predominantly Mormon community, but if it is, they have certainly embraced a few changes to encourage people to visit.  There were plenty of restaurants and not many appeared to be dry.  We ended up finding a brew-pub just up the road which had some very nice beers ( mainly cold and wet ) and a small but cosmopolitan and well done menu.  I think we both had pasta.  Following this, we had the need to walk off a few of the calories, so we strolled further up and down the main street for an hour or so, and spent a little time in a gallery which was full of very good photos of local landscapes – I think the photographer was practising techniques for changing the apparent colour balance of his work, and he had managed to get a very fine collection of images of local geology.  If only we were good enough to take photos like that.  I think it may have been here that Kas first got the inspiration to buy Kev a book called Plateau Light as a birthday present.  It contain many similar artistically taken shots of the southern Utah landscape, not just in the National Parks, but in some of the more remote, little known spots.

Before going to bed, we decided to have a think about our plans for the rest of the week.  This was mainly because we wanted to go to Grand Canyon, and previous experience taught that it was best to pre-book some accommodation.  We tried to book accommodation on the North Rim but failed, so we ended up booking somewhere on the South Rim for the following Thursday and Friday evenings.  This gave us three more nights to spend in Utah before needing to be at Grand Canyon.  This essentially set our plans for the rest of the week.  The only problem we encountered was that our Moon Guide for Arizona was also quite old, and the telephone area codes all changed since it was written.  The motel internet connection therefore proved useful because we were able to go on line to find hotels.  In fact, we ended up actually booking the hotel in Grand Canyon from a website, and getting a printed receipt in the motel there and then. And so to bed.  We’d now been in the US for over a week, but still felt that we had plenty of exploration left in us.