Not much to say really. We got up a bit early, drove to Heathrow, stood in several queues and eventually got on one of BA’s finest big aeroplanes bound for San Francisco. 10 hours of flying later and it was still only mid afternoon when we arrived. Oh yes, jet lag !

San Francisco airport was uneventful, as was the taxi ride downtown. We had one of those American big city moments. Miles and miles of suburbs and wide roads, then suddenly your view is blocked out by all these big buildings that someone very thoughtlessly left in the way. Downtown San Francisco just rises out of the suburbs. So we arrived at our hotel, the Westin St Francis ( http://www.westinstfrancis.com/ ) on Union Square. Right in the middle of downtown, and certainly deep in the middle of the one way system. 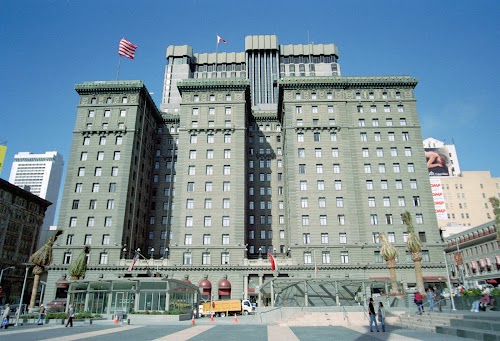 We were both equally excited and tired. We were looking forward to a quiet dinner and some sleep prior to our first day of actual holiday. However, the hotel room wasn’t ready so we lounged for an hour or so in the lounge, drank some drinks, nibbled some nibbles and listened to a jolly nice chap tickling the ivories ( he was fairly friendly with the ebonies as well ).

Suitably checked into our room, we were slightly disappointed with the lack of view, but I guess that’s the downside of cheap deals – someone has to fill the not-so-plush rooms. Undaunted, we snoozed for a bit and then got ready to find that nice quiet, simple dinner.

A couple of blocks round the corner was a sort of Italian bistro place – quite possibly Puccini & Pinetti at 129 Ellis St ( http://www.pucciniandpinetti.com ). It wasn’t quiet, and we didn’t get a table, we sat at the bar, but the service was good, the beer was cold and wet and the food was very good. It was full of people and was as good an introduction to San Francisco as you could want. So all in all, dinner made up for the long day spent sitting in a big metal tube. We went to bed, even though it was only about 9pm. Our bodies thought it was six in the morning, so it was about time for some zzzzzzzzzzzzzzzs really.