This morning started off as a complete disaster for us.  Overnight, Mexican Hat had been hit by a power cut as a result of the thunderstorm the night before.  You wouldn’t think this was a particular problem, but here’s why.  First, we were low on fuel and both gas stations were out of order because the pumps were obviously electric powered.  Second, it was very hot and sweaty in the motel room because the air conditioning has been off for an unknown length of time while we were asleep.  Finally, breakfast was going to be tricky.  It’s times like this when you realize how dependent on electricity we are.  The general store next door was open, but it was also dark, and they didn’t have hot coffee or hot anything else.  They did still have cold drinks, but they were warming up quickly and everyone who opened the fridge to get a can out caused the remaining cans to warm up a little bit more.  And then, of course, it’s difficult to pay properly because the till was electric powered as well.  We eventually got pastries and cold drinks, but didn’t find anything entertaining for lunch. 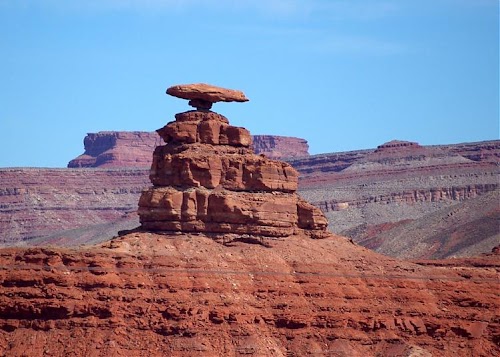 This was one of the low points of the trip.  The main problem was the lack of fuel.  If we left Mexican Hat, we certainly didn’t have enough to get to Grand Canyon, and that’s where we needed to end up because we had prepaid some rooms there.  In fact, we weren’t sure we could make it to Kayenta either.  And although Kev had been to Monument Valley before, he couldn’t remember the form, and so couldn’t picture whether there is a gas station or not.  And even if there was a gas station there, would it have power ?  So if we stayed, we would waste a day and lose the money we paid for the hotel at Grand Canyon, but if we left we risked getting stuck somewhere with no facilities until the power came back on.  Flip a coin, do we feel lucky or not.

After the best part of an hour sitting in the car waiting to see if the power came back on we gave up and headed towards Monument Valley.  The Moon Guide mentions a nearby place called Goulding’s Trading Post.  It sounds like an old fashioned place with a couple of wooden huts selling hardware and guns, but maybe the book was a bit out of date.  Anyway, we got up to Monument Valley and saw the signs for Goulding’s just up a road on the opposite side.  We hacked the couple of miles up there and were somewhat relieved to see not only a gas station with all the lights on, but also a Subway outlet.  I think this was our first Subway of the trip, but it proved not to be the last.  Fill up with juice, then size large sub with lots of dead animals and a couple of tubes of Pringles for us.  Panic over, what were we worried about ?

Monument Valley ( www.monumentvalleyonline.com ) is famous for a number of films which were shot there.  It’s the archetypal western scenery, with flatish land punctuated by towering buttes, mesa, and the like.  You can just picture John Wayne slowly riding his horse through the valley in some incidental shot in the middle of the film, just after he’s received the call for help and just before he starts shooting all the bad guys.  It is now classed as a Tribal Park and is entirely on land owned by the Navajo.  This means it is not part of the NPS, and so we had to pay to get in. And you get to drive down this piece of road, with this spectacular view, as you’re approaching it. 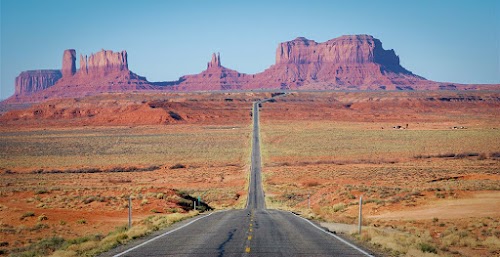 There is a reasonably impressive visitor centre at the top of a hill, and from here there is a good viewing platform looking down over the main expanse of valley.  The closest monuments to you from here are the two Mittens, and these are probably the most recognizable features from all the old cowboy films.  On the day we arrived, it was cloudy, and there were still some thunderstorms left over from the previous night.  These were drifting by to the west of the valley ( over by Goulding’s ) and you could clearly see lightening strikes bouncing off the top of the mesas and torrents of rain.

None of this quite made it over to Monument Valley while we were there.  Having convinced ourselves that the weather wasn’t going to be too bad, we decided we were OK for the 17 mile scenic drive.  The brochures will tell you that this isn’t suitable for any vehicles apart from jeeps, but my personal opinion is that this is a marketing ploy by the guys who run the jeep service.  OK, if it was raining or snowy you wouldn’t want to take a normal two wheel drive car on the drive.  Likewise, if you had a sports car you’d end up losing your front spoiler and exhaust system, and there are a couple of stretches of track which have loose sand, so aren’t suitable, but these were gated off when we went.  In good weather and good light, the majority of the drive is OK for your average family saloon, and certainly wasn’t a problem for our RAV4, with its reasonable ground clearance and fat-boy tyres.

The scenic drive takes you into the valley and then has a loop at the end portion before returning you back up the initial slope to the visitor centre.  There are about 20 stop-offs, all well signposted and covering most of the parts you would want to see such as the Totem Pole, the Thumb, John Ford’s Point, the Mittens, and so on.  We picked our way around the drive stopping at most points and taking loads of photos.  This day, Kas was doing colour and Kev Black & White, so we got a mix.  The passing clouds made for some interesting interplay of light and dark, and was much more interesting than it would have been if it was just sunny.  The further and further we went round, the more the sky cleared and the brighter it became.

We probably spent 3 hours driving round before ending up back at the visitor centre for a service stop and some lunch.  The Subway specials were now suitably warmed up to room temperature, and there were still some clouds drifting by to the west and it was windy, but still warm. You can see all the clouds clearing away if you look at the photos below. 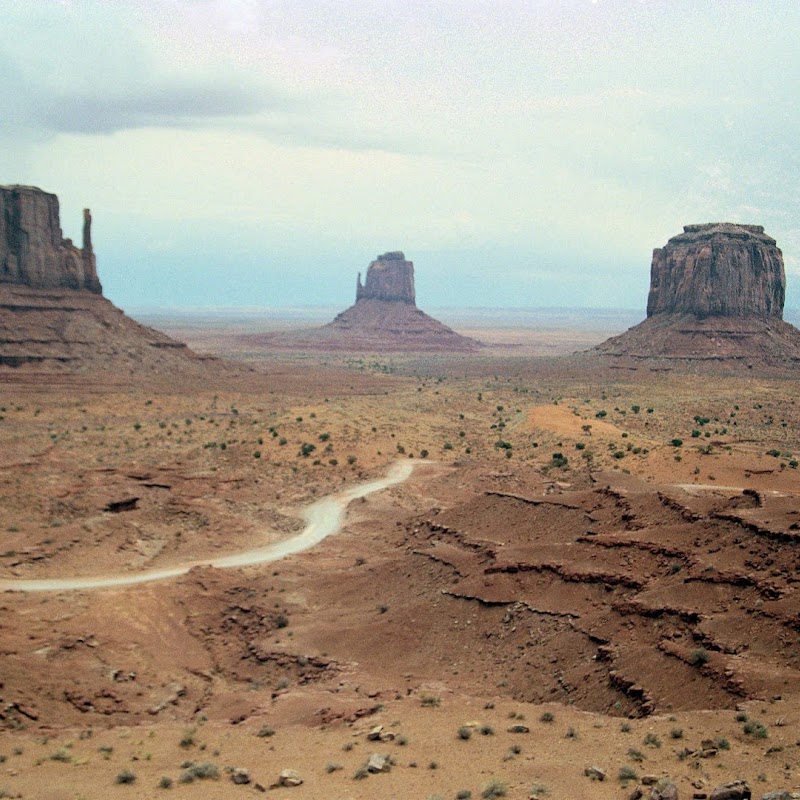 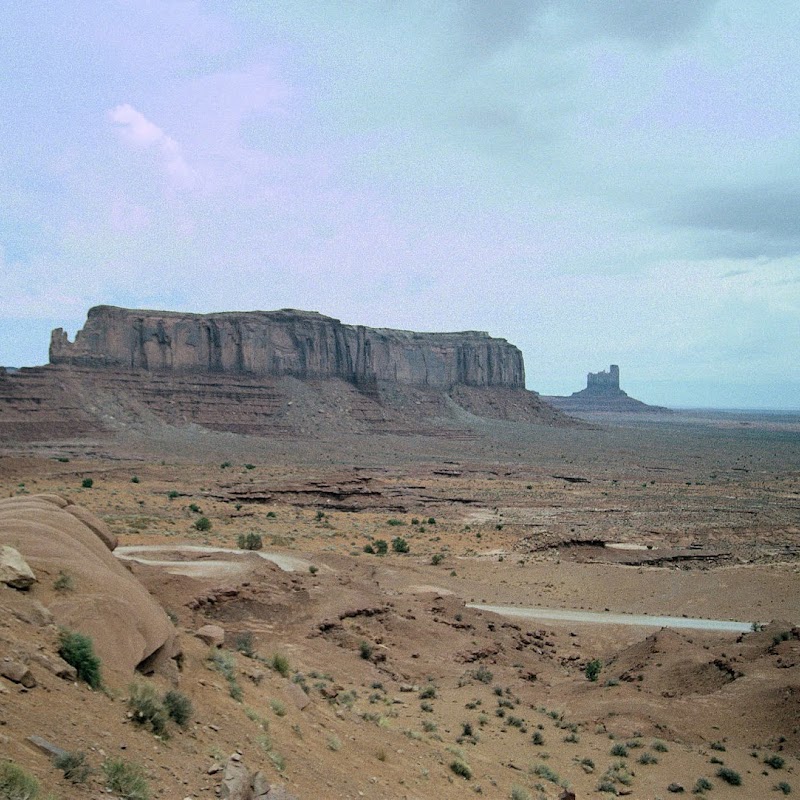 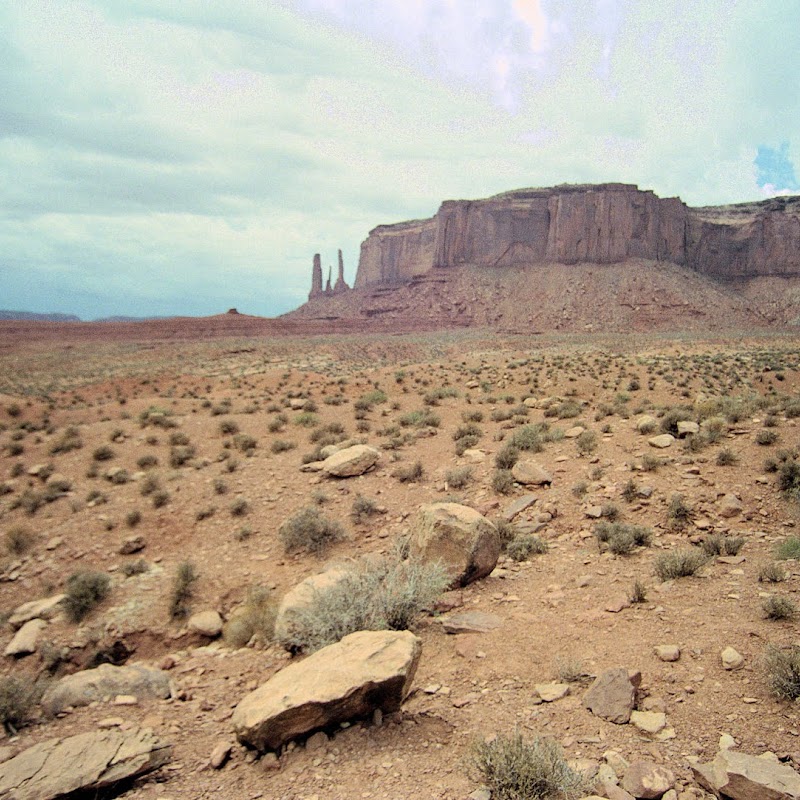 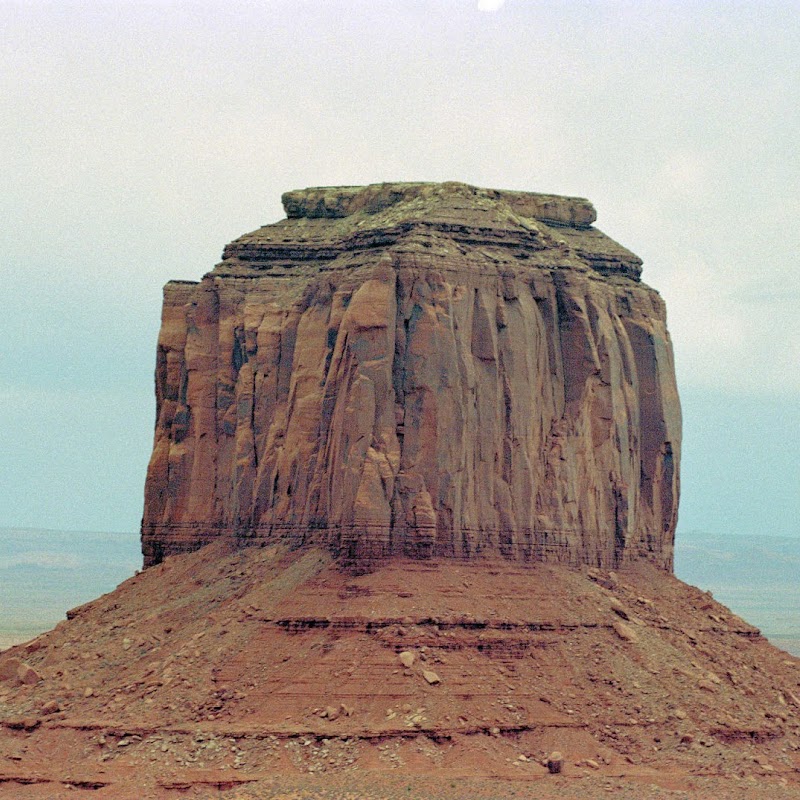 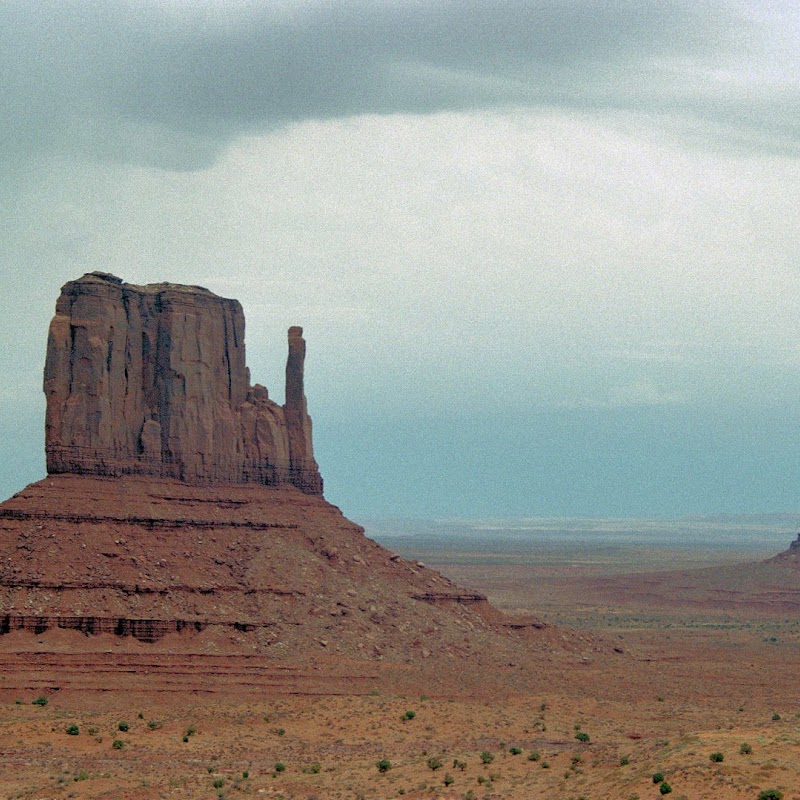 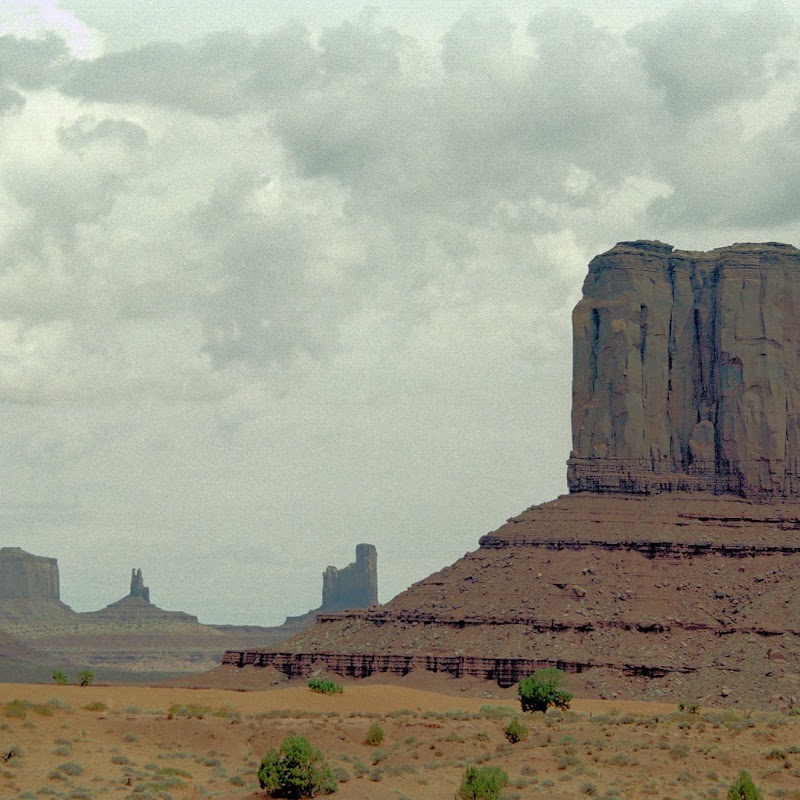 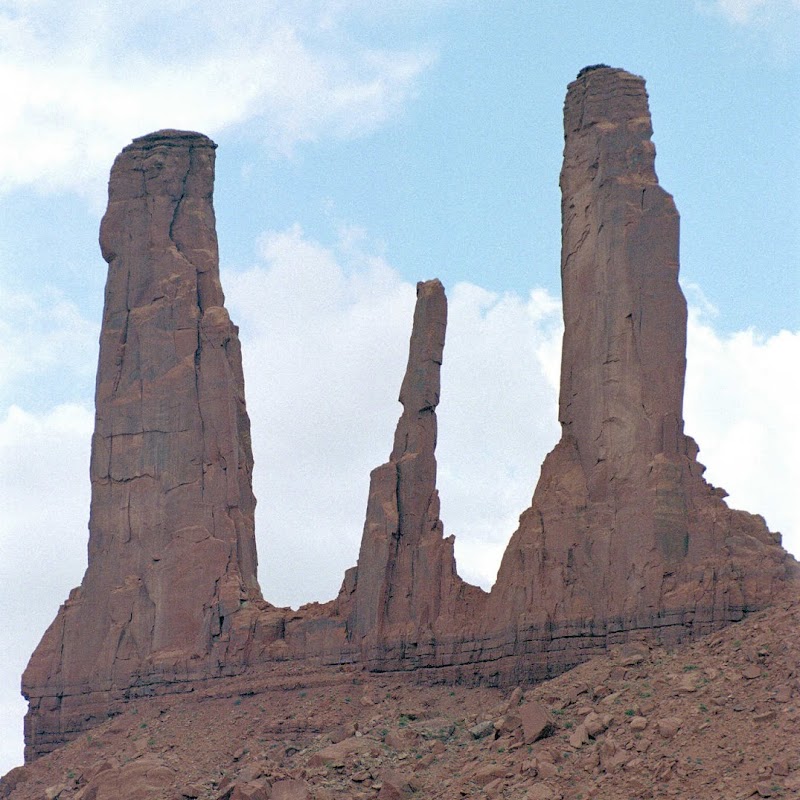 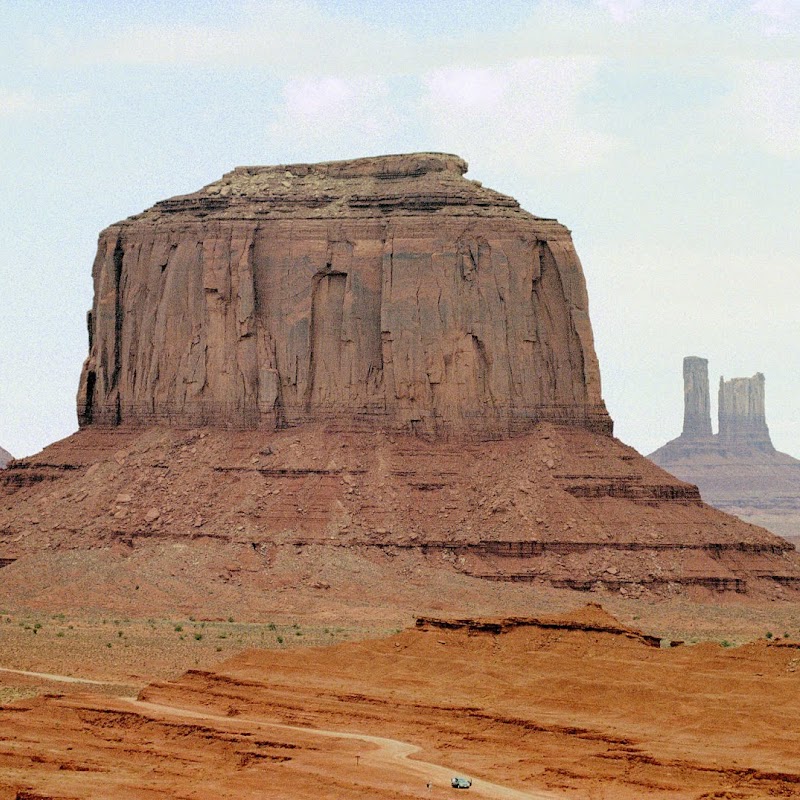 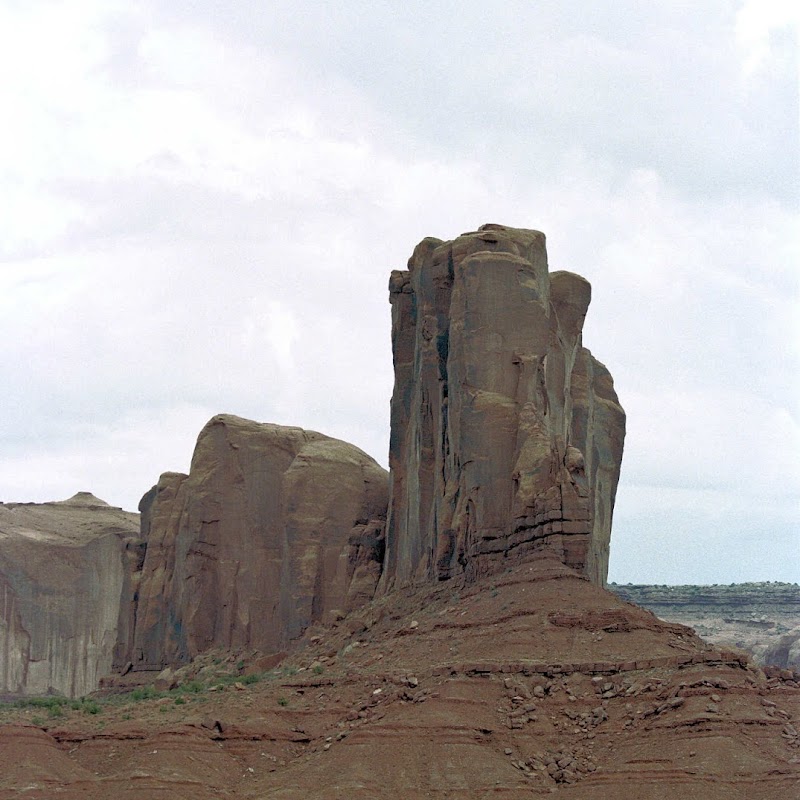 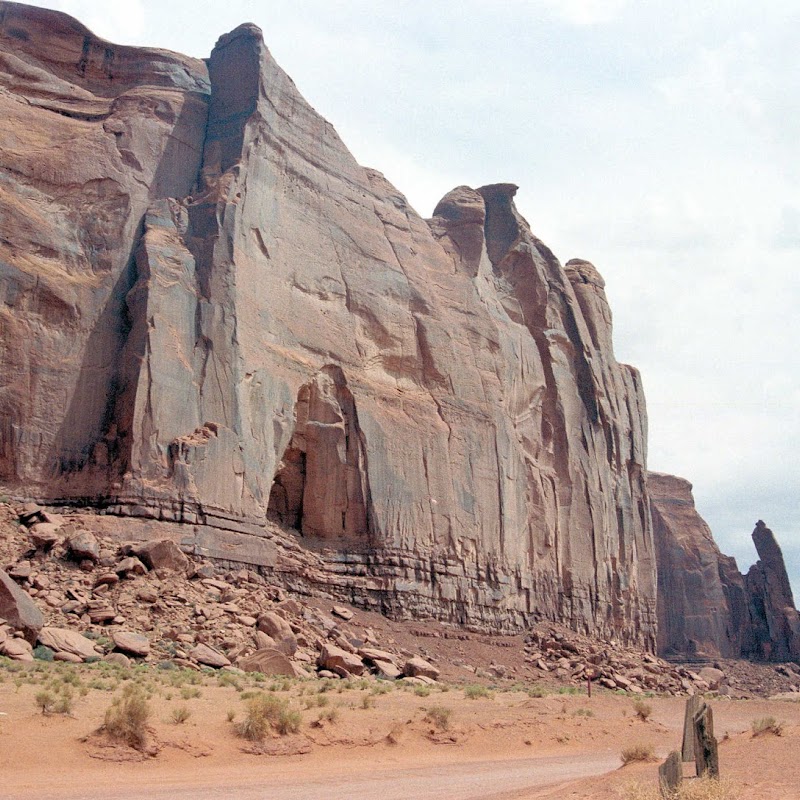 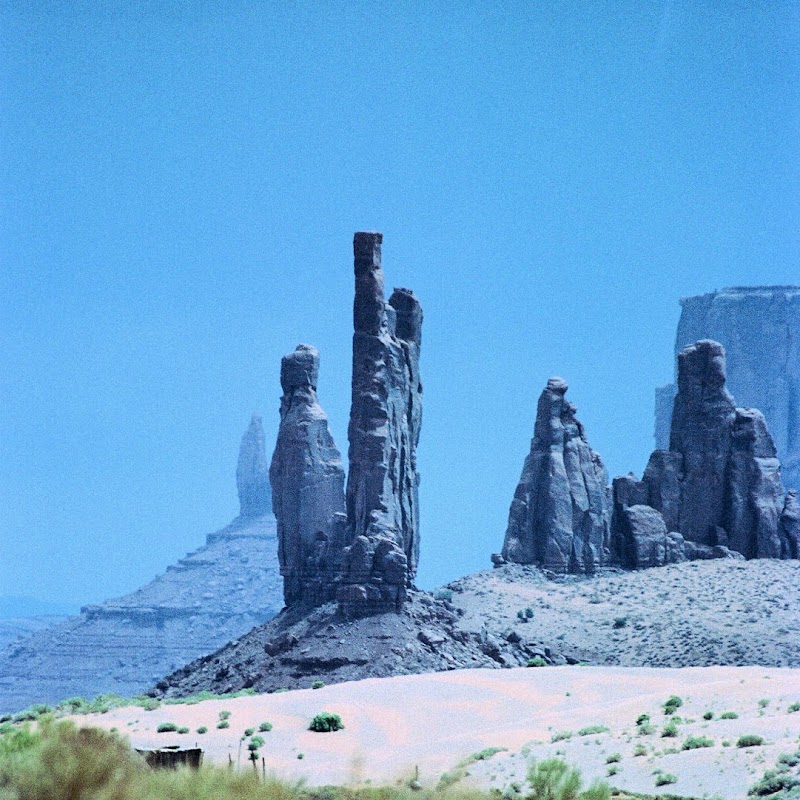 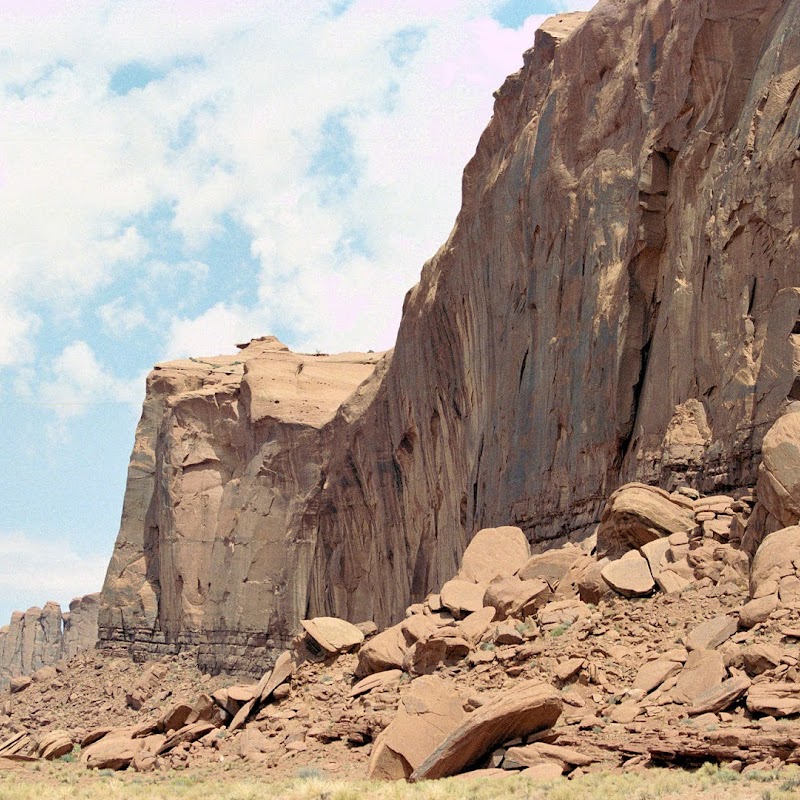 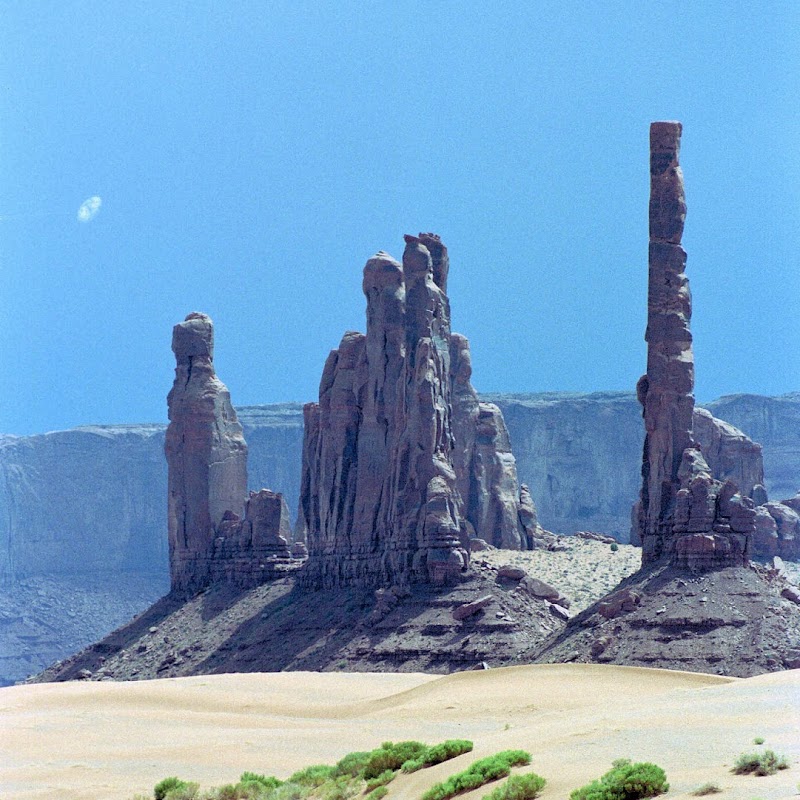 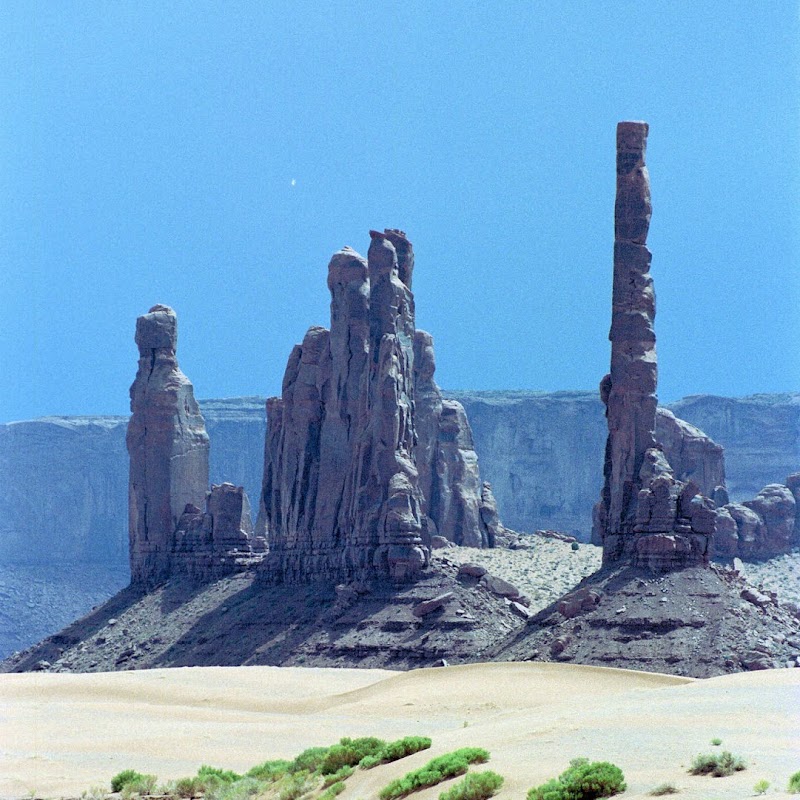 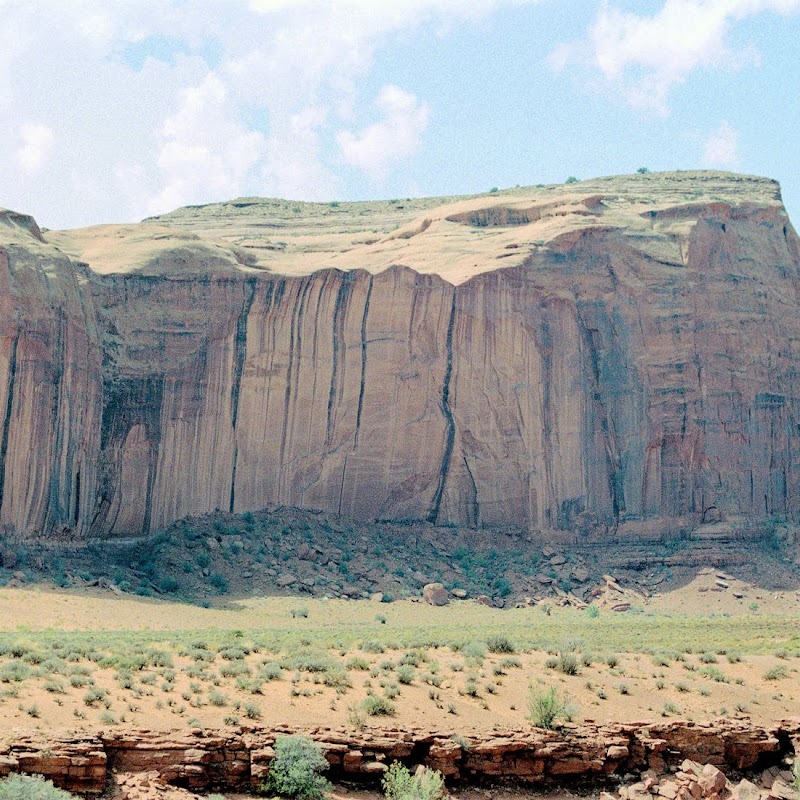 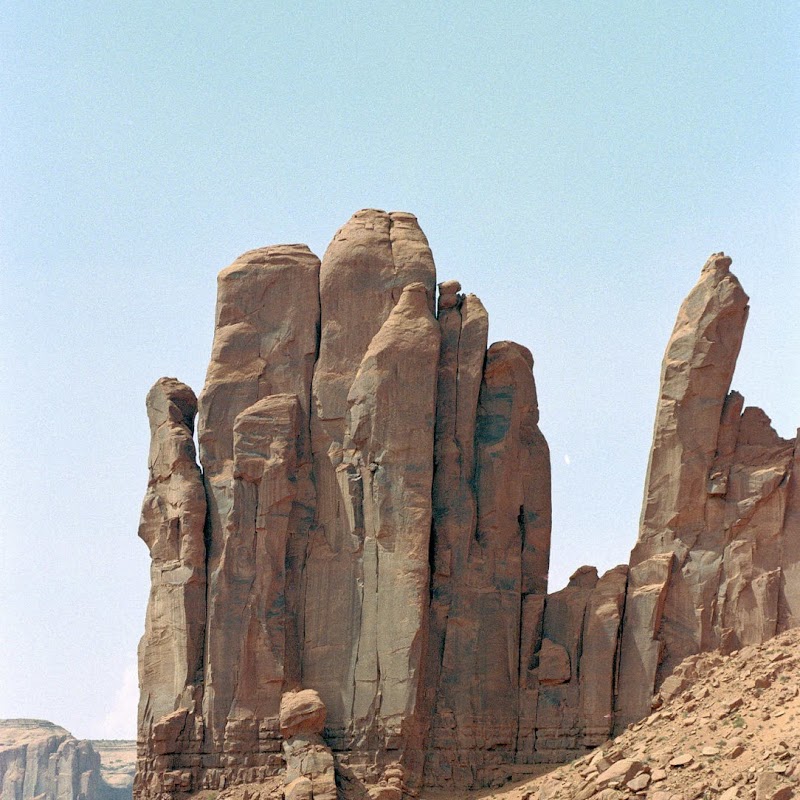 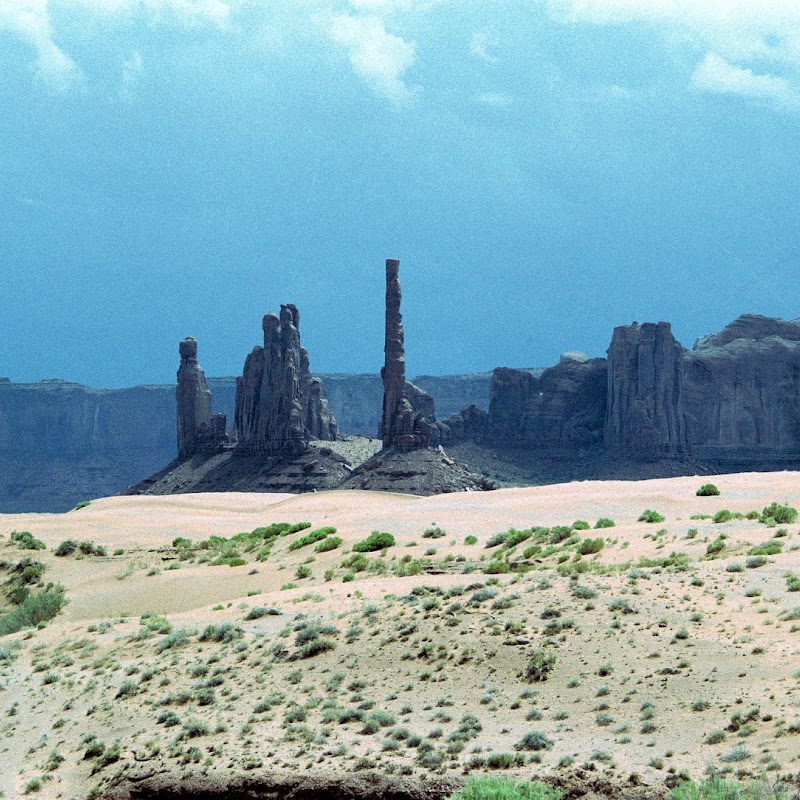 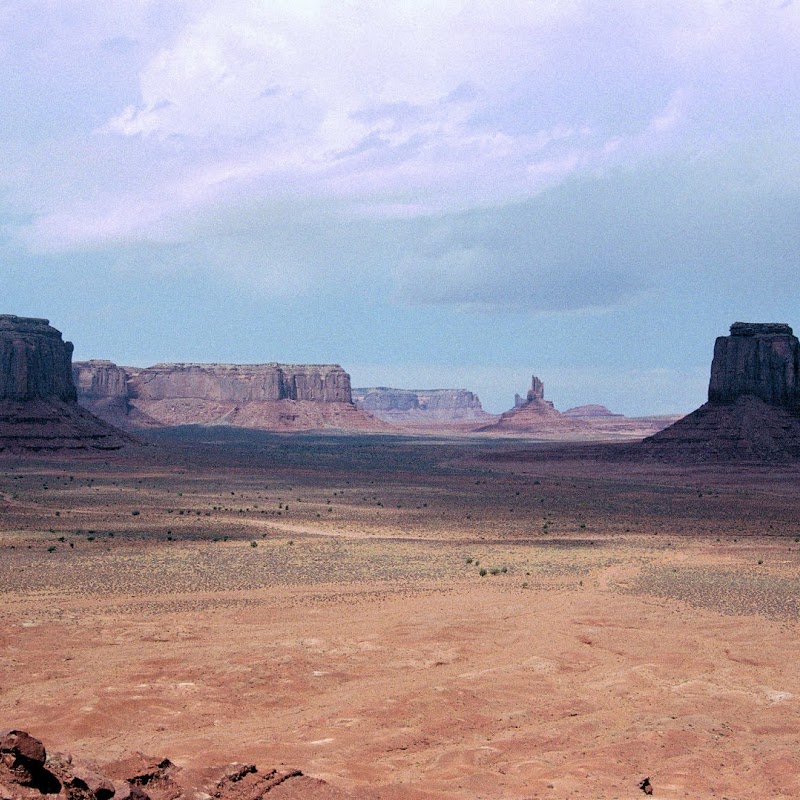 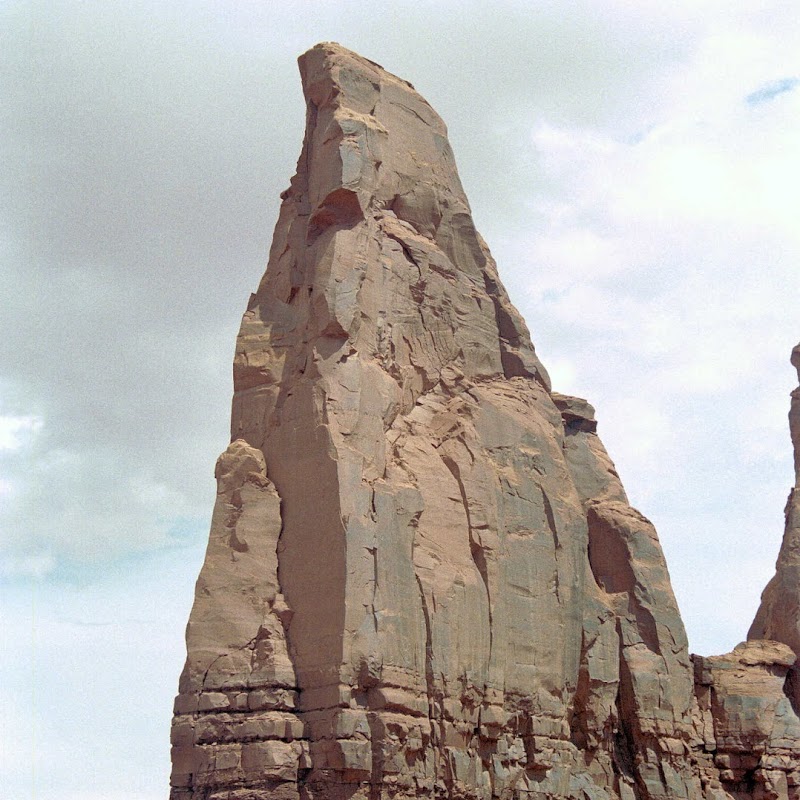 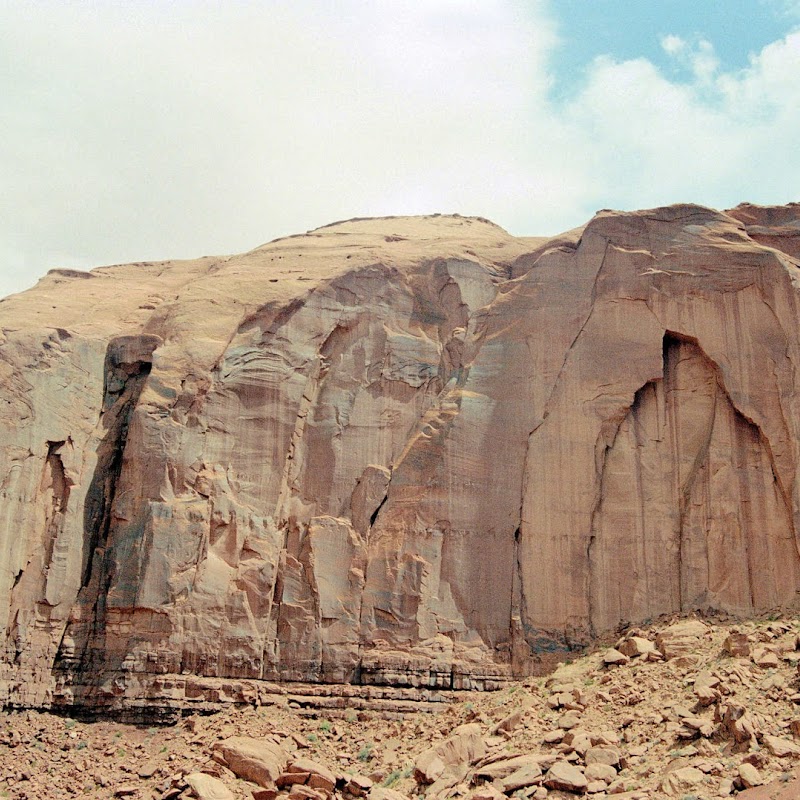 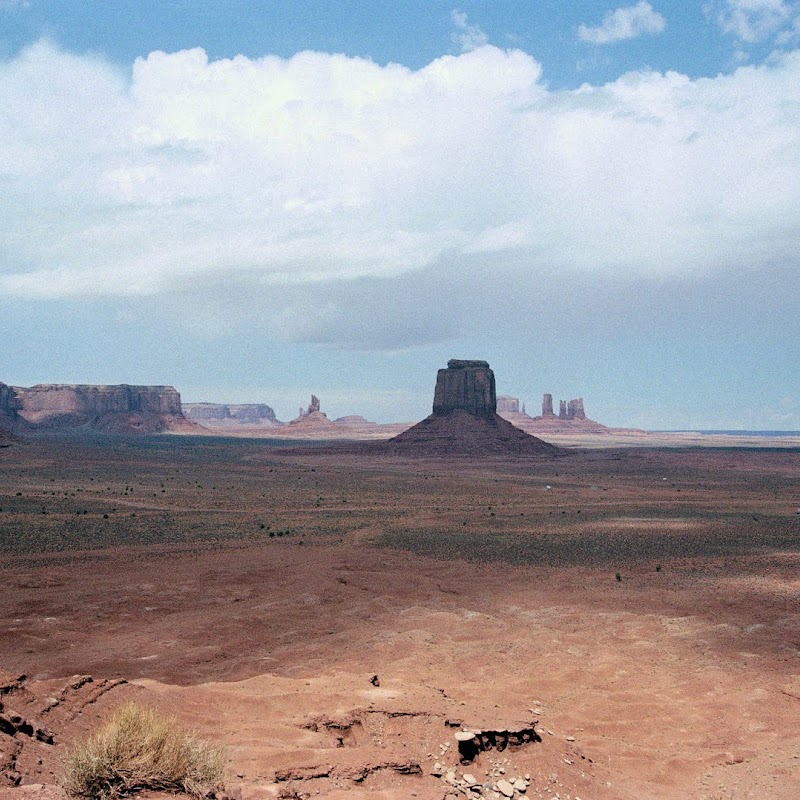 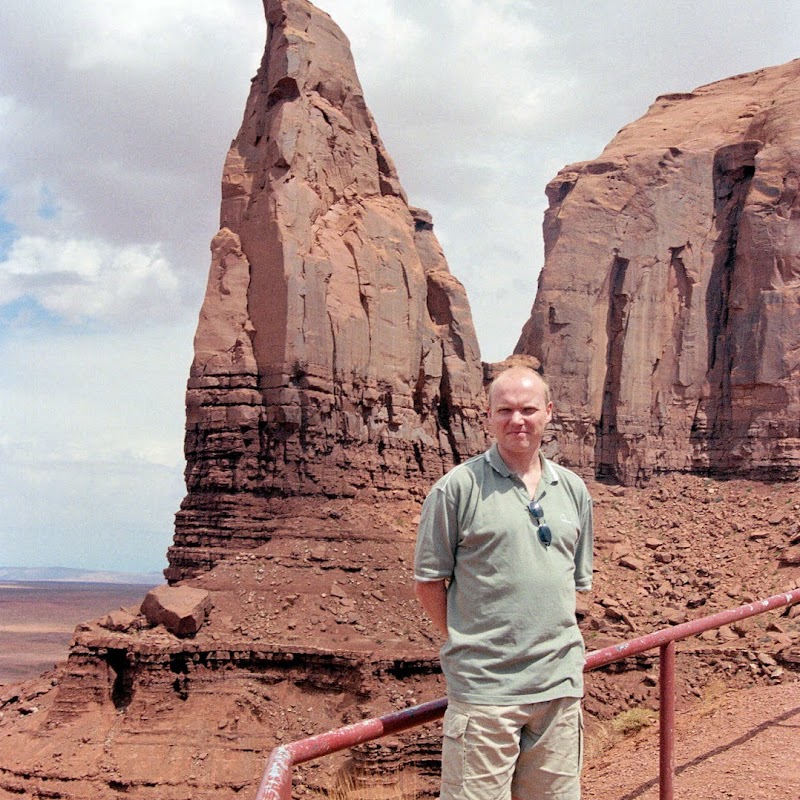 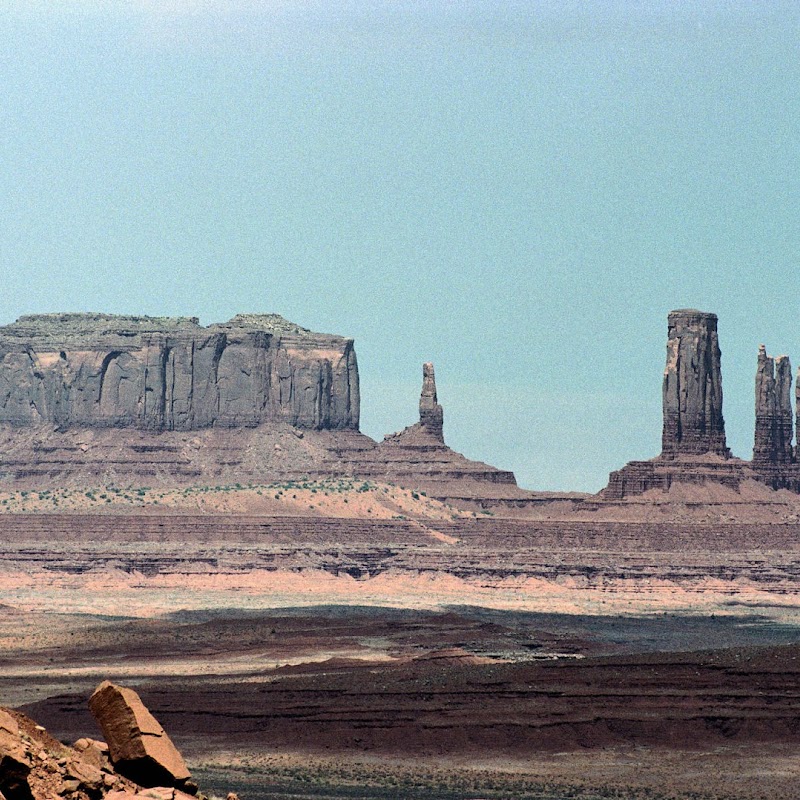 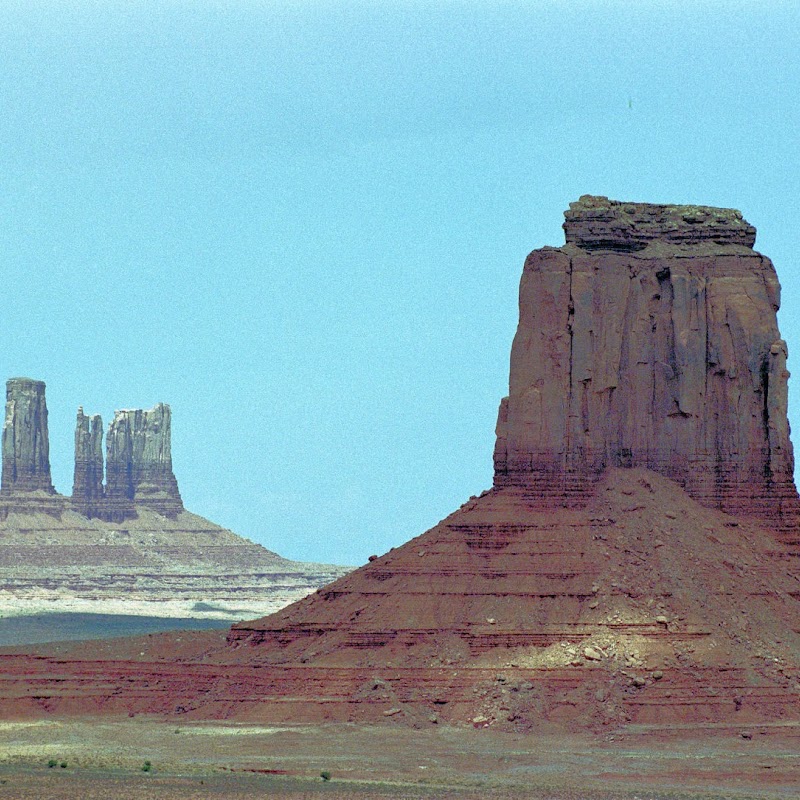 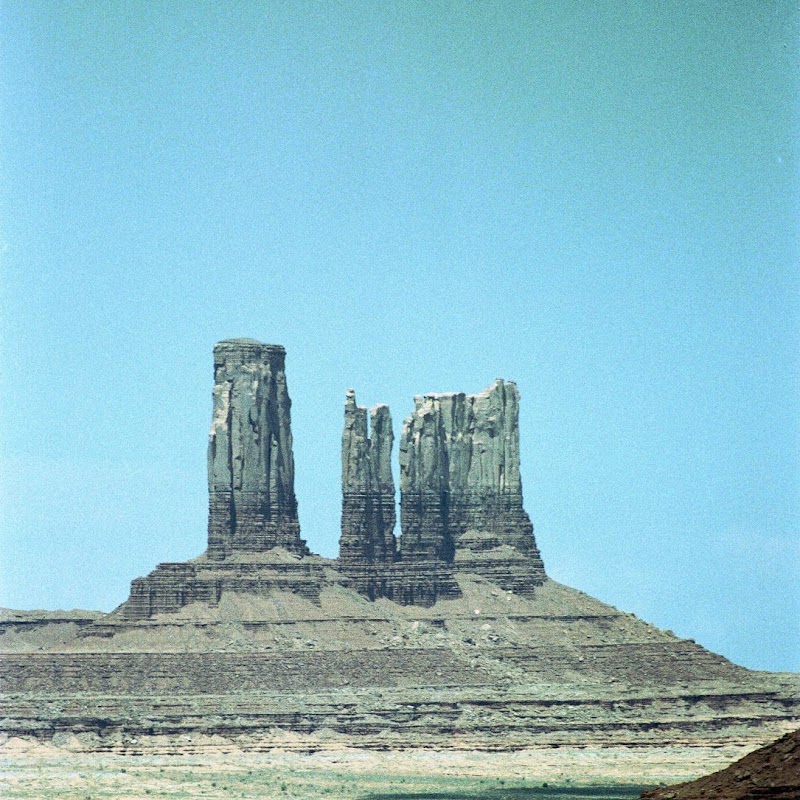 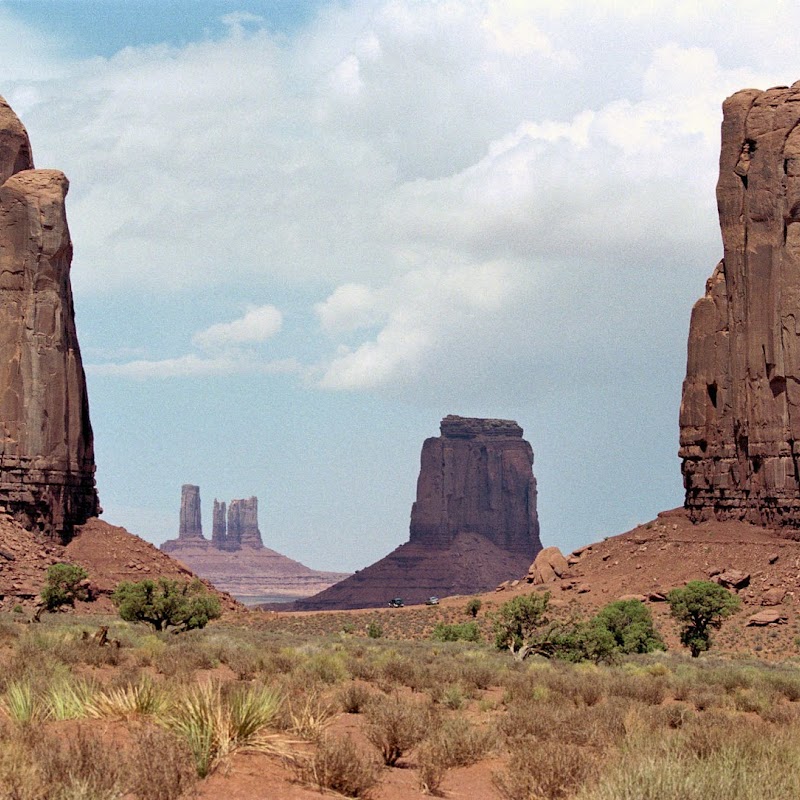 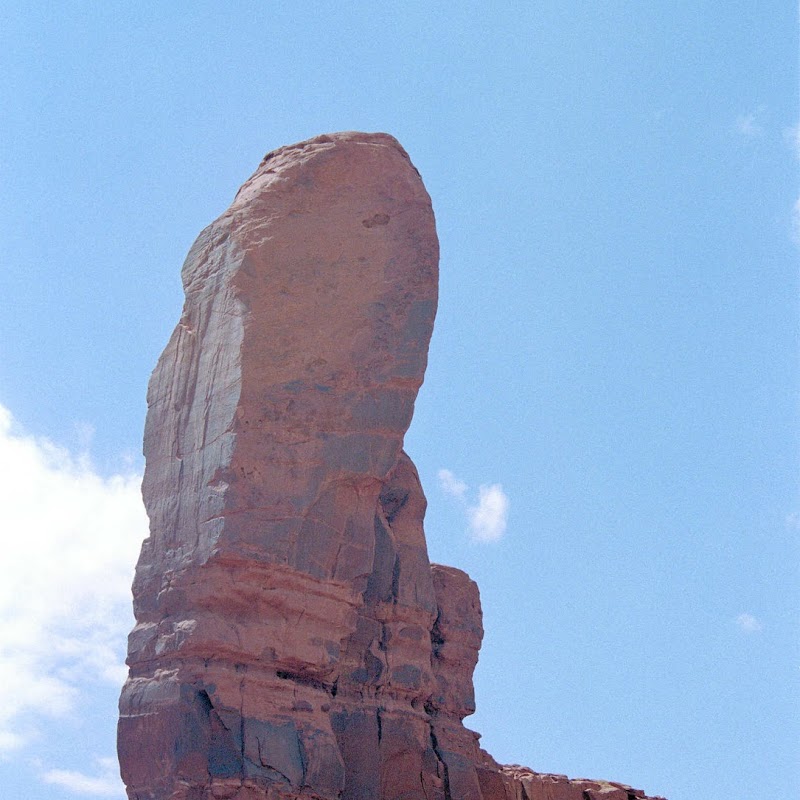 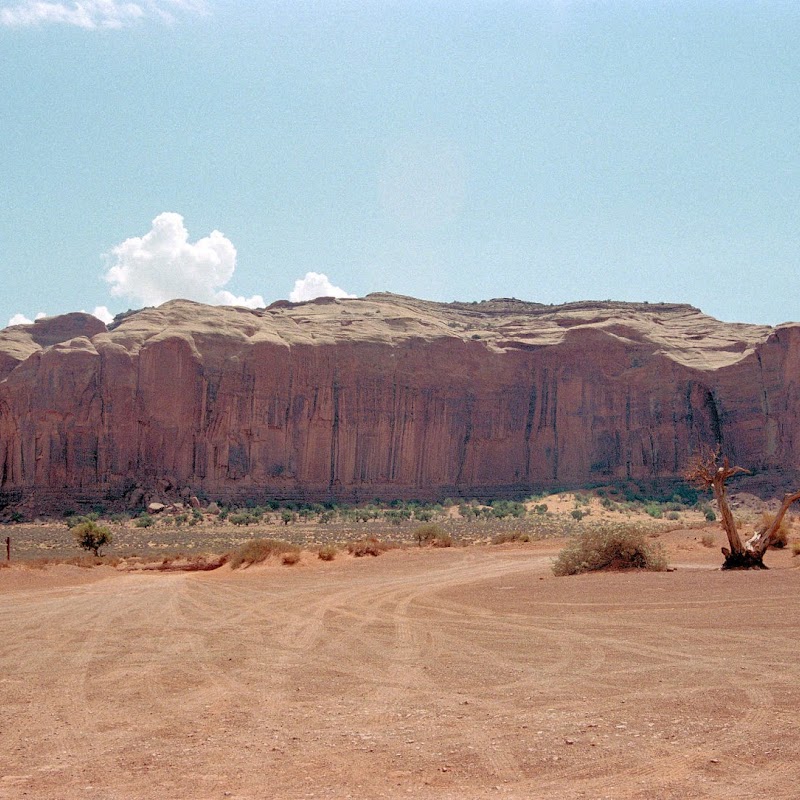 By now, we were beginning to feel the pressure of time again, even though we had a confirmed room in Grand Canyon, so we drove back out of the valley, past the long lines of stalls selling “genuine” Navajo craft items, and headed south towards Kayenta .The drive towards Grand Canyon through the Navajo lands is fairly dull as landscapes go, there isn’t a huge amount to look at. It’s also a surprisingly long way, and once you pass Kayenta and turn west there seems to be just mile after mile of straight flat road with an accompanying line of telegraph poles, and not much else.  This part of the drive was made more interesting by a 10 minute hailstorm which gave the car a good rattling, but otherwise it was pretty uneventful.  We stopped in Tuba City for ice creams and kept going.

Eventually you come to a junction where the left turn goes south to Flagstaff and the right goes north to Page.  If we had been brave, we could have reached here by taking an unpaved road through Grand Staircase Escalante National Monument, which eventually leads into Page and thus to here.  This round trip would have meant we could avoid Capitol Reef completely, and cut about 400 miles out of the journey, but we wanted to go to Monument Valley anyway, and we didn’t fancy the full 70 miles of dirt track through the monument.  This bit of road is still in Navajo country, and every few miles there are more little roadside stalls selling “genuine” stuff.  We wondered how you could make a living doing this.  The roads aren’t that well traveled, and surely there is only a certain amount of trade that a roadside stall is going to attract.  Most of them only seemed to have only the stallholder present, no customers. We finally reached the right turn to the east entrance to Grand Canyon National Park.  We still had a fair way to get to our hotel ( in Tusayan ) and time was still marching on ( as it does ) so we skipped any ideas about stop-offs and just drove straight towards park HQ and on to Tusayan for a very welcome night at the Quality Inn.  The hotel proved to be pretty well fitted out ( this was one of the more expensive stops of the trip ) so we went for a quick dip in the pool then got ready for some food.  We chose a fast-ish looking generic pizza/pasta place just over the road from the hotel.  The food was fine, and it was about as much as we could manage for the day.

Anyway, tomorrow was going to be busy and exciting, so both of us wanted to get a good night’s sleep.