A new day dawned, and another whole day in Joshua Tree was in the offing.  We began with the now customary free breakfast courtesy of Best Western, and then drove to the nearby mall for lunch items and more water. Always more water. And Pringles. It’s the two things most essential on any trip to the desert – fluid and salt replacement. So technically they’re probably somewhere between health food and a survival kit.

We were feeling suitably refreshed and keen to attempt another walk, so we plumped for the nearby Fortynine Palms Oasis.  The entrance to this area is just to the west of our hotel, so it was pretty quick to get to.  We parked in a lot containing two other cars, and set off on our way over a hill, not knowing really what to expect or how long it would take.  The walk proved to be one of the most rewarding of the holiday, not because of the drama, or the sweeping views, but because of the little things.  It was a walk through what we English would describe as “rolling” hills – little ups and downs, nooks and crannies, small valleys and climbs.  We were surrounded all the way by much the same.  It was a quiet time too.  I think we passed two families coming back ( those whose cars were in the park when we arrived, presumably ) but then no one else for probably 2-3 hours.  The really interesting thing about this walk was the nature.  There aren’t big rocks, but there are a wide variety of plants that you pass by, and it is interesting ( as an English couple ) to see different types nestling in their little habitats.  The most striking were a variety of cactus which looks like a spiky red ball.  At first we didn’t really realize what these were until we passed one quite close to the path.  From then onwards we noticed them everywhere.

We eventually rounded one corner on the path and saw some trees up against a hillside in the distance.  These were the only trees we saw on the walk, and they looked like palms, so we put two and two together and guessed this was the oasis.  It took a bit more time to walk to them, but we were right.  I’m not sure what I expected at the oasis, probably some open water and an encampment of Bedouin, or something, but there were basically a few trees which had obviously found some water fairly close to the surface.  There was no water visible anywhere.  We didn’t count the palms, so we took it on trust that there were 49 of them, but you do wonder what would happen if one died, or another started growing.  Would the NPS engage in planting ( or removal ) to keep the number right, or would they change the name to Fortyeight Palms, or Fiftypalms Oasis, or would they just leave it as is, for the confusion of passing tourists ?  There is a danger in naming things after a number of trees, as the English town of Sevenoaks discovered in a particularly violent storm in the late 80s, when six of them fell over.  Meanwhile, back at the plot, the oasis did have some good photo opportunities, especially for use of the recently purchased wide angle zoom lens – these were quite large trees, and we were standing right amongst them.

The walk back to the car was fairly uneventful, and was very lonely.  We got back to the car to find an otherwise empty car park.  Hmm, must be getting too hot for anyone other than the English to be outside.

So next we took a very short drive round to the Indian Cove campsite, mainly because the books said there were a couple of short hikes from the car park.  We ended up just driving around the empty campsite and decided that nothing looked very entertaining, and anyway, it was rapidly approaching mid afternoon and we felt lunch and a siesta coming on.  Back to the hotel for us, then. 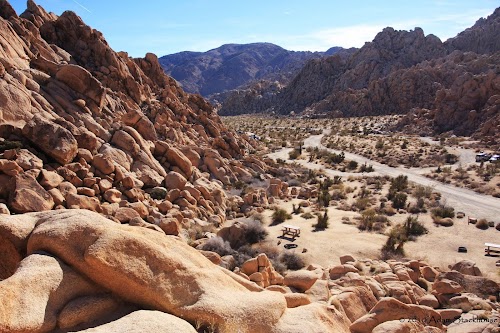 Later in the afternoon we were feeling a bit more lively and so headed off out again.  This time we entered the park via the entrance station in Joshua Tree and sped round to the car park at Hidden Valley.  This was apparently a popular place in the good old days of cattle rustling, so there was some history to the place.  There is a reasonable length hike on a fairly good and flat pathway through the valley.  It has an interpretive trail which covers some of the history but also the flora and fauna, so it’s worth doing.

Next we went round to Barker Dam for a bit more history.  Again, there is a short interpretive trail and hike on level ground here, and it is good for passing half an hour or so.

Somewhere around here we bumped into an English couple in a car who appeared to be totally lost.  They seemed to be driving around the park without any maps or guides trying to find the “good” bits.  Hmm, the maps and brochures are free guys, just pop to the Visitor Centre…….

After this we decided we had probably done enough walking for one day, so we drove back through the park for one final glimpse and a few photos of Joshua Trees before leaving by the east entrance at Twentynine Palms. 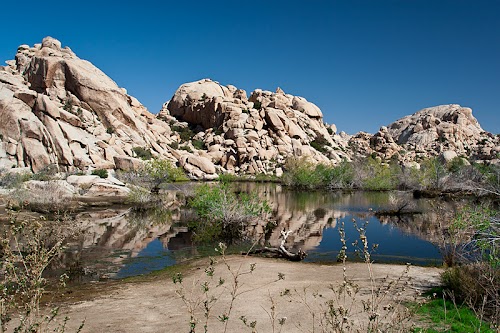 We returned to our hotel to discover that the power was off.  Great news – no electricity means no light in the interior bathroom, so we had to shower and clean up by the light reflecting in through the window – just as well it was a bit earlier than other nights and there still was some light.  It also meant no air conditioning, which isn’t good.

It proved that the power cut was pretty localized, because we headed off towards the centre of Twentynine Palms and discovered lights on everywhere.  We ended up going into a Chinese restaurant, for a change, and it was pretty good.  It also had a few other people in ( not many, but a few ) and this was the first real sign that anyone else was actually in Twentynine Palms.  We almost had to wait for a table.

The power was still off at the Best Western when we got home, which meant trying to use the loo in complete darkness, but it magically came back on at some unknown point in the middle of the night, so that was OK then. We were beginning to think we were jinxed.  We’d spent a couple of weeks out in the desert and had been rained on, nearly hit by lightening, hailed on and encountered two power cuts.  I thought deserts were supposed to be dry, hot and sunny all the time.  Obviously not.