So another day began, and another substantial breakfast was consumed prior to checking out. Well there’s no point in risking starvation when you’re out in the desert, even if you do have a car and a Visitor Centre handy. Best not to risk it, in my opinion.

Our objective for the morning was to walk along the rim, so we parked up in a big lot in what looked like an old railway yard, and found our way to the bus stop going to Hermit’s Rest.  The bus driver on the drive out had what could probably be described as the ultimate low stress retirement.  Her and her husband basically lived in a large RV, and camped down somewhere warm every winter.  Every spring, they got in contact with the NPS and took seasonal jobs driving buses in Grand Canyon.  They had both done several seasons, and didn’t seem to tire of it.  I guess if you spend half the year driving around people who are there to enjoy themselves, you probably get to see people who are always at their best, and are unlikely to moan about buses being late, slow, hot, or overcrowded – not to the driver anyway.  So she had a whale of a time meeting a significant proportion of the American population ( and assorted others ) and driving them somewhere they wanted to be, rather than somewhere they were paid to be.  Can’t be a bad life.  Probably doesn’t pay too well, but they weren’t doing it really for the money, more for a chance to meet people whilst keeping occupied during their retirement.

It was quite a long wait for the bus out to Hermit’s Rest, because we just missed one when we got to the bus stop, but we didn’t mind too much and we didn’t moan at the driver, and she rewarded us with a prompt drive and potted life history.

When we got to Hermit’s Rest, we had some pretty grand ideas about walking all the way back to Grand Canyon Village, and our minds were suitably numb to the distance we traveled on the bus and the heat outside. So we set off back along the Rim Trail towards the village with our usual bags stuffed with water and photographic equipment.  We left lunch in the car to encourage us not to be late.  The views from the rim are pretty dramatic from much of this walk, and the relatively peaceful trail on this section was most welcome.  Grand Canyon Village, and most of the major viewpoints, are very busy, but even though this trail is very close to the road and there are frequent bus stops, not many people seem to walk along it.  This is a shame for them, but a bonus for us.  We walked and walked for what seemed like an eternity, and we both resolutely agreed to pass bus stop after bus stop and keep walking.  Each new promontory gave a slightly different perspective and this kept us going when the feet started to hurt a bit.  We took some rests and drank some water.  The we walked a bit more.  Then we found a bench in some trees and photographed a squirrel.  And we found another British couple who kindly took a photo of us.  Then we walked a bit more.  Eventually the water started looking a bit short, and the feet definitely hurt, so we mutually agreed that we’d had enough.  In fact, I think we hadn’t actually looked at the canyon for a couple of miles, and so this was enough justification for stopping.  If you’re not looking at the scenery any more, get on the bus and have a rest. 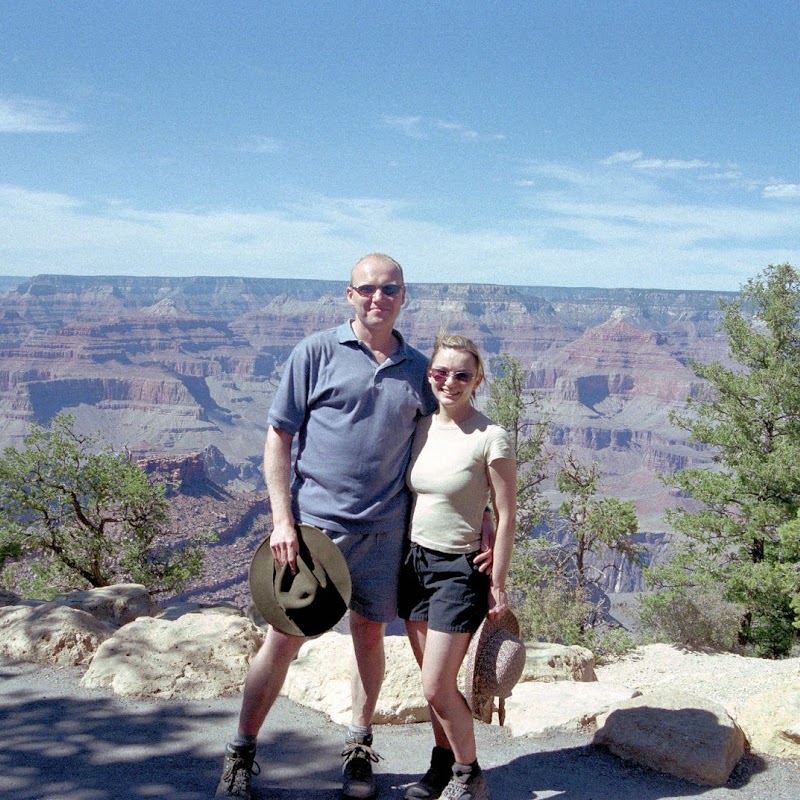 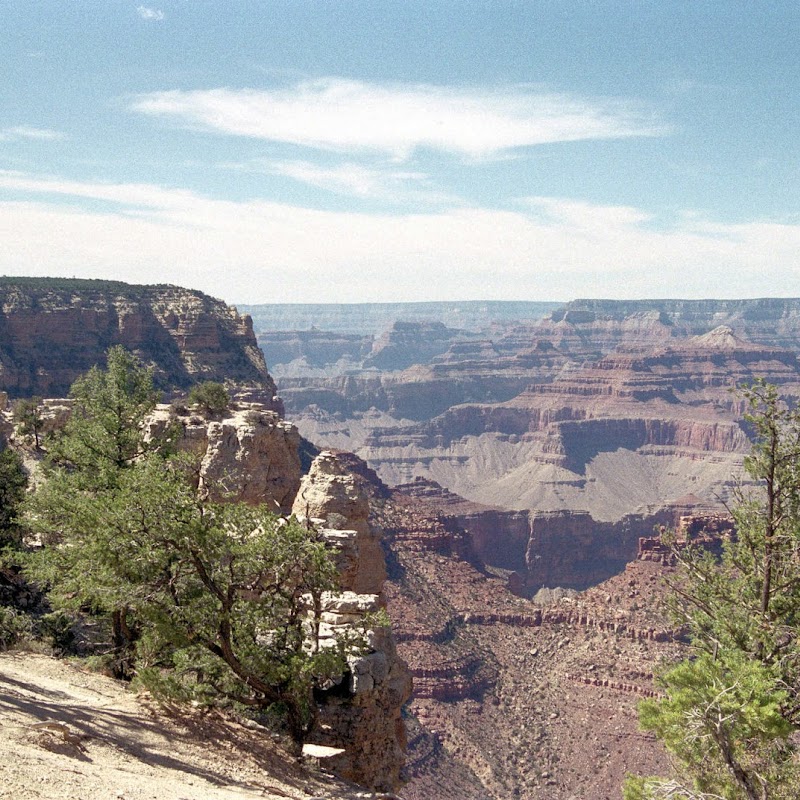 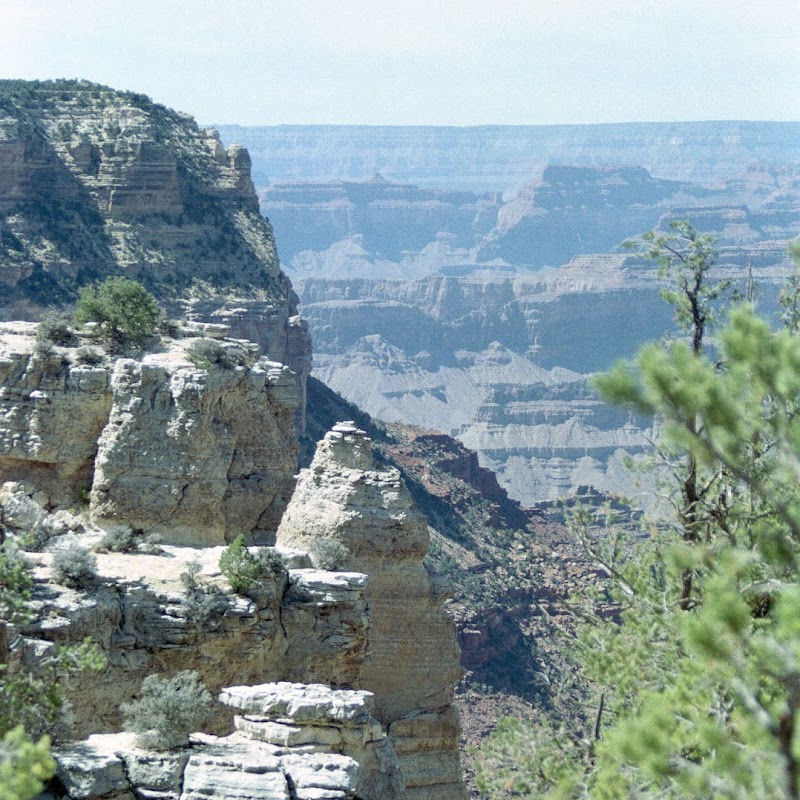 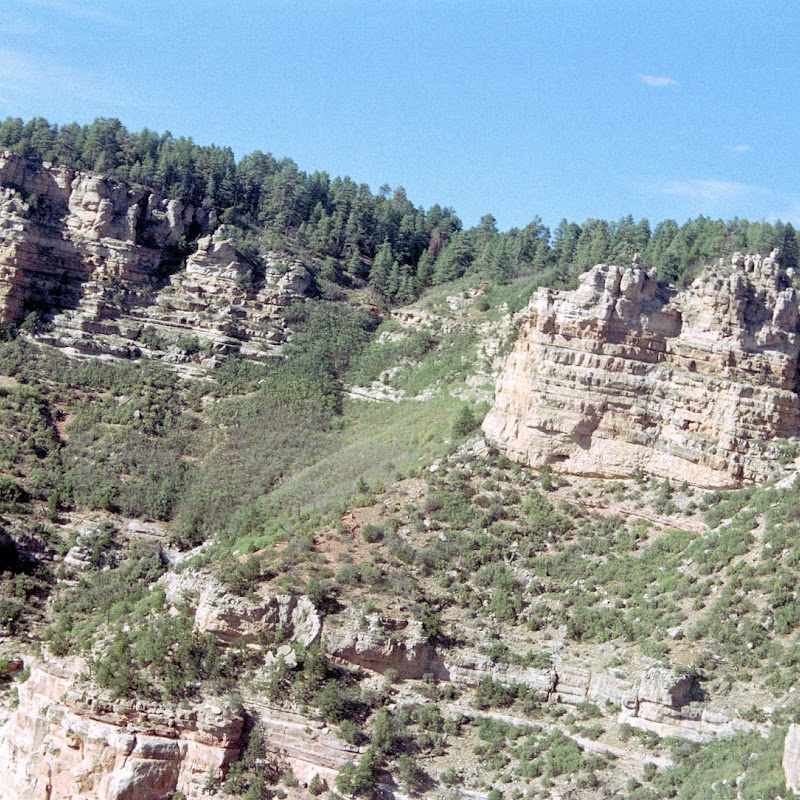 We waited for the next bus, rode back and then trudged across the village to our car.  We had thankfully parked under some trees, so the car wasn’t too hot.  We grabbed our lunch and walked up to the canyon rim for one final overlook whilst eating.  There are worse places to sit with your sandwiches and Pringles.

We were debating the plan for the rest of the day and the following day, and plumped for staying in Flagstaff and then heading out east to the Petrified Forest.  We had a half afternoon to fill in, so we decided to take the scenic drive round to Flagstaff rather than the quick route.  This involved following the eastern Rim Drive back out to where we had originally come in to the park.  We stopped off at a couple of the overlooks on the way out, but neither of us felt inclined to take loads of photos, which was probably a good sign that we were all canyoned out. So eventually we just headed for the park exit and then took the turn south towards Flagstaff. 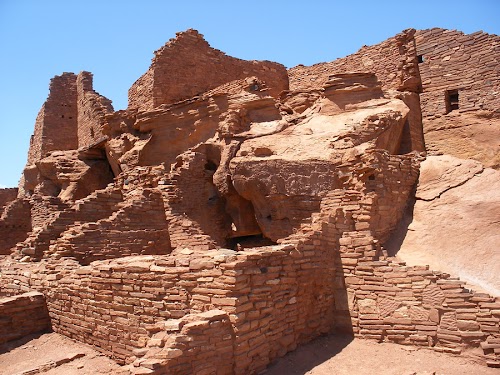 On the way, we decided to drive through the Wupatki National Monument ( www.nps.gov/wupa/ ), as it wasn’t really out of the way and we were both intrigued.  We stopped at two main sites, Wupatki Pueblo and Wukoki Pueblo.  Wupatki is a pretty big one, and if you’re into this style of thing, a very impressive specimen.  The loop trail is fairly easy going and the free brochure from the Visitor Centre gives you all the details you need to know when walking round.

The instructions, however, seemed far to complicated for some of the visitors.  One pre-pubescent girl and her family were going round the loop in the opposite direction to the numbered signs, and were getting all confused because they couldn’t follow the text on the brochure. Another couple disgracefully allowed their teenage children to climb all over the monument, despite the abundance of signs asking you to respect and preserve it. Good to see people paying so much attention. Never mind, it was an interesting walk round and good to learn about current thinking on how these people lived and what eventually forced them to move on. If I was any good at history I could probably compare their culture to the state that Europe was in at the same time, but I’m not, so I won’t.  Wukoki was a much smaller site, and consequently occupied us for a much smaller amount of time.  It is basically a single building surrounded by a single, loop shaped track.  Neither of us took any photos, which was a bit of a shame. Maybe we were still feeling knackered after the efforts of the morning, and had basically run out of enthusiasm. Anyway, no photos. The one here is borrowed.

The loop road out of Wupatki continues on its way to Flagstaff via the Sunset Crater Volcano National Monument ( www.nps.gov/sucr/ ), but by the time we got there it was getting to be quite late and the Visitor Centre looked shut.

I don’t think we were keen enough to stop anyway, so we just hacked on down to Flagstaff to look for a hotel for the night.  On a previous visit to the area Kev had stopped in a hotel on the old Route 66 coming into Flagstaff from the east, and remembered there were loads of places there.  So we tried this as a first stop.  However, we tried a couple of decent looking places but they were full.  We couldn’t really figure out why they were full, this was not an experience we were used to in the USA, until some kind soul pointed out to us that it was Labor Day weekend, and as tradition would have it, the hotels were all full of weekend tourists and people on conventions.  D’oh !  We did some further research into our ageing Moon Guide and determined there should be a few more hotels the other side of the railway tracks, just beyond downtown.  There were a couple as promised, and one had some vacancies, so as it was getting late, we took the option of paying an inflated rate for a pretty average room, rather than head out of Flagstaff to somewhere else.  Anyway, Kev had a headache coming on, and we really couldn’t be bothered with any more driving.

We had a quick clean up and then walked back under the railway up into Flagstaff’s bijou and compact downtown area to get some food.  We found a likely looking restaurant / bar place which was busy and quite loud. A little table inside had our name written on it, and after a short wait we got seated, fed and watered.