Next day we were in need of a leisurely pace, especially seeing as it was a Sunday, so we decided to lie in for a while.  As there was no breakfast room at the hotel, we ended up in a small mall out on the old Route 66, where we had Starbucks for breakfast, and then bought Subway for lunch.  The attendants in Subway were confused by our accents, what with us obviously not being American.  Surprisingly enough, Starbucks was Starbucks, and Subway was Subway.

Our next objective for the day was the fairly dull drive east along I-40 to Holbrook to visit the Petrified Forest National Park ( www.nps.gov/pefo/ ).  It takes a couple of hours or so, and there isn’t much to look at as the landscape is flat heading in this direction.

Petrified Forest is not full of trees that are frightened, it is full of trees which have been turned into rock, by some wondrous and very time consuming chemical and geological process.  We entered the park by the south entrance and drove straight on the main Visitor Centre for orientation and free brochures.  The park ranger we spoke to at the desk was British, which was a surprise, and he warned us that whilst the walk around the Rainbow Forest loop trail behind the Visitor Centre was a good introduction to petrified trees, it was also currently packed with a bus load of Japanese tourists on a photography excursion, so there were plenty of obstructions around the pathways.  This loop trail is the most accessible and best signposted & documented in the park, and it is literally right at the back of the Visitor Centre.  It is therefore the one which has the heaviest concentration of visitors.  However, it is good, because the pathways are easily negotiable, and they lead you through some excellent, and very photogenic, bits of petrified tree.  It’s also handy for the toilets……. 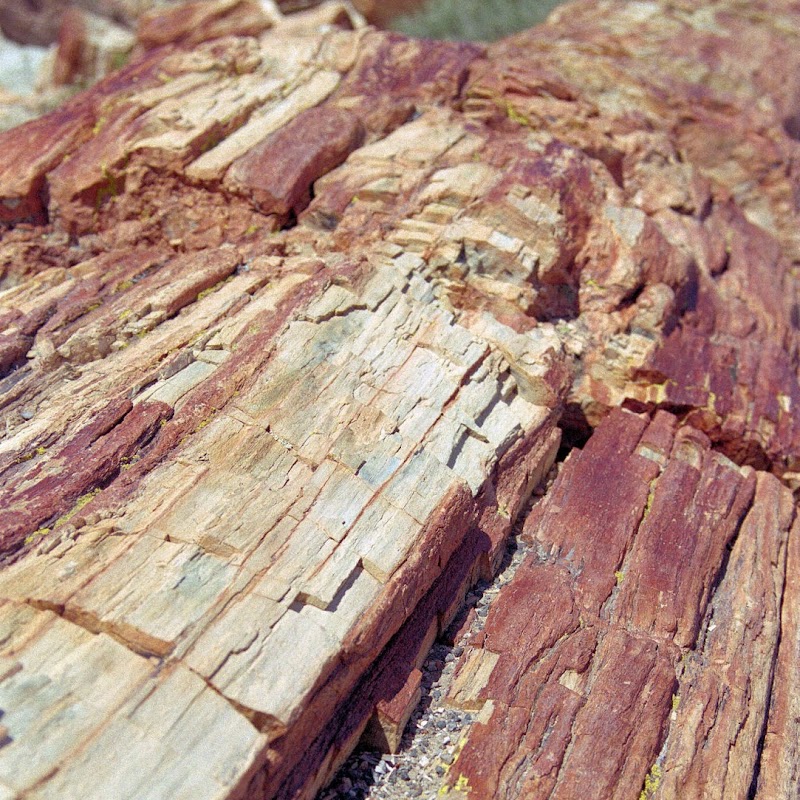 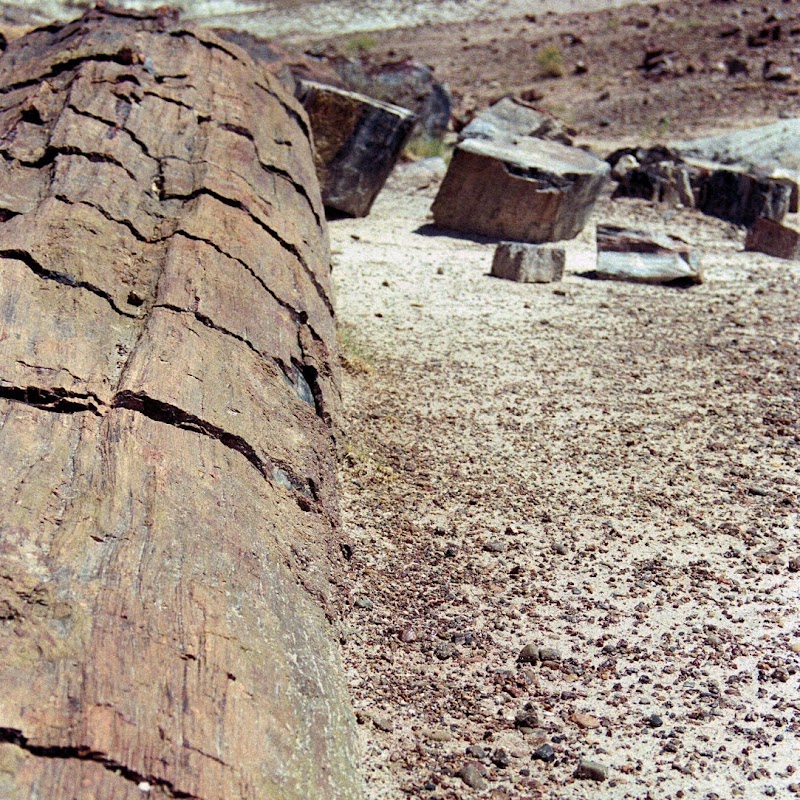 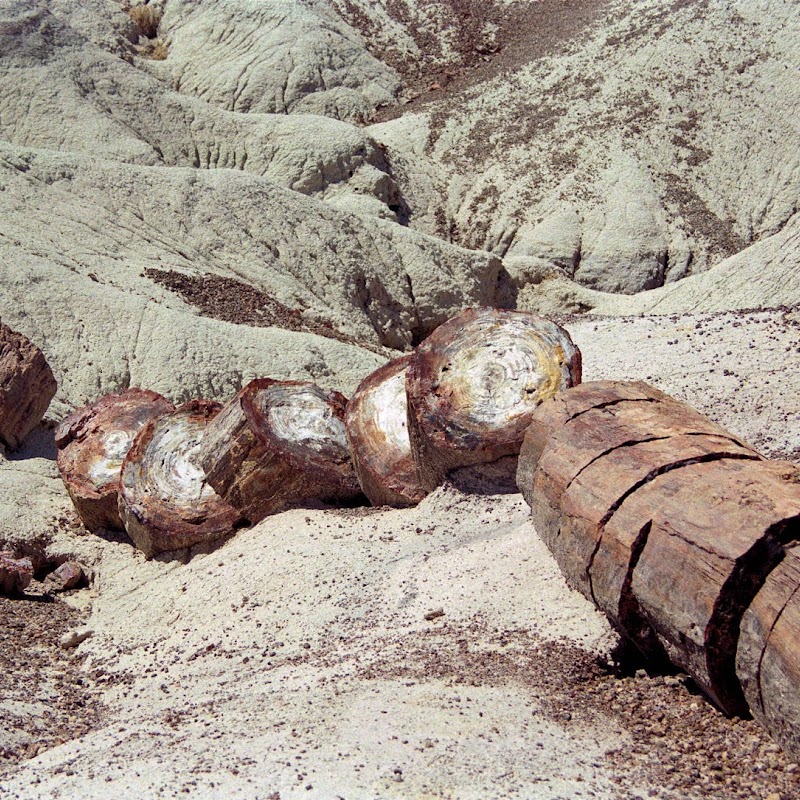 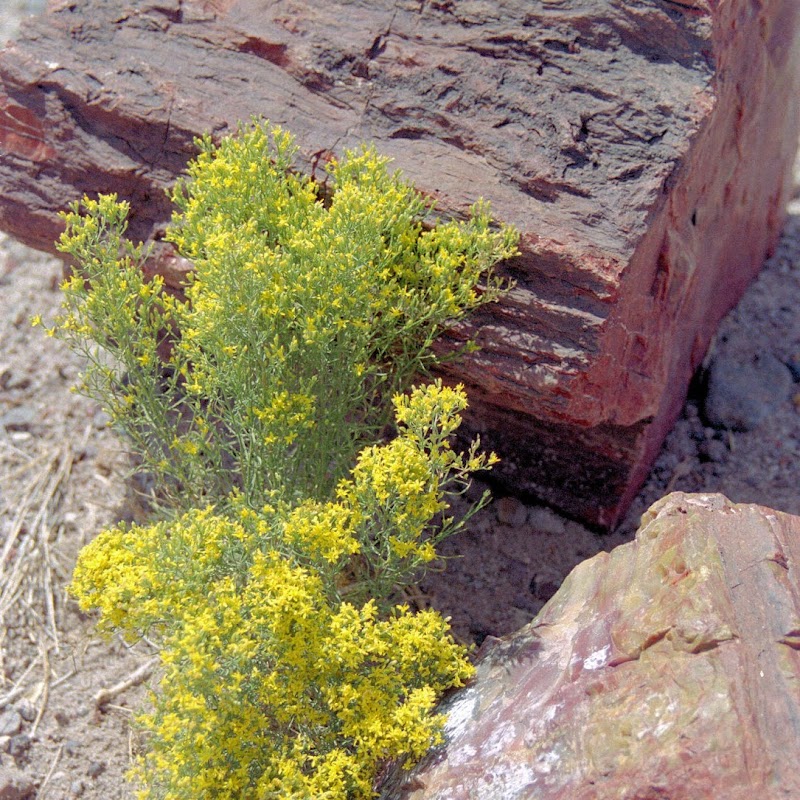 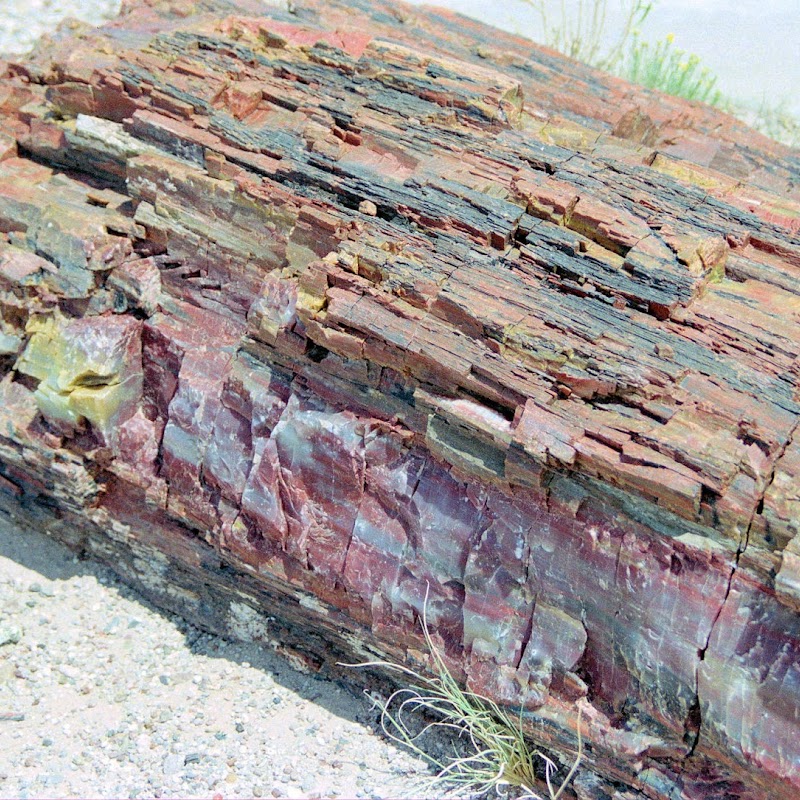 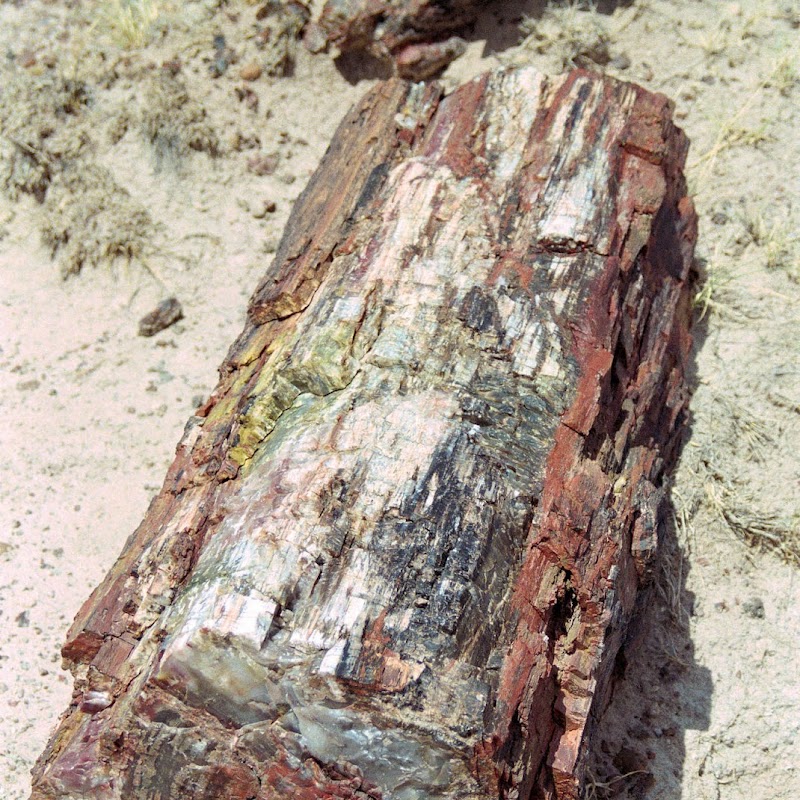 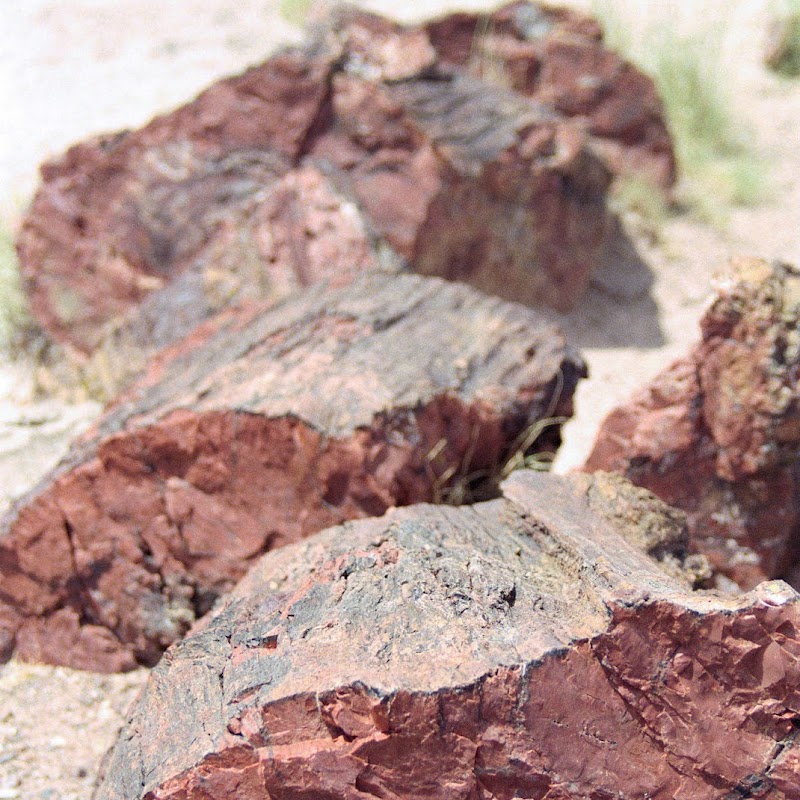 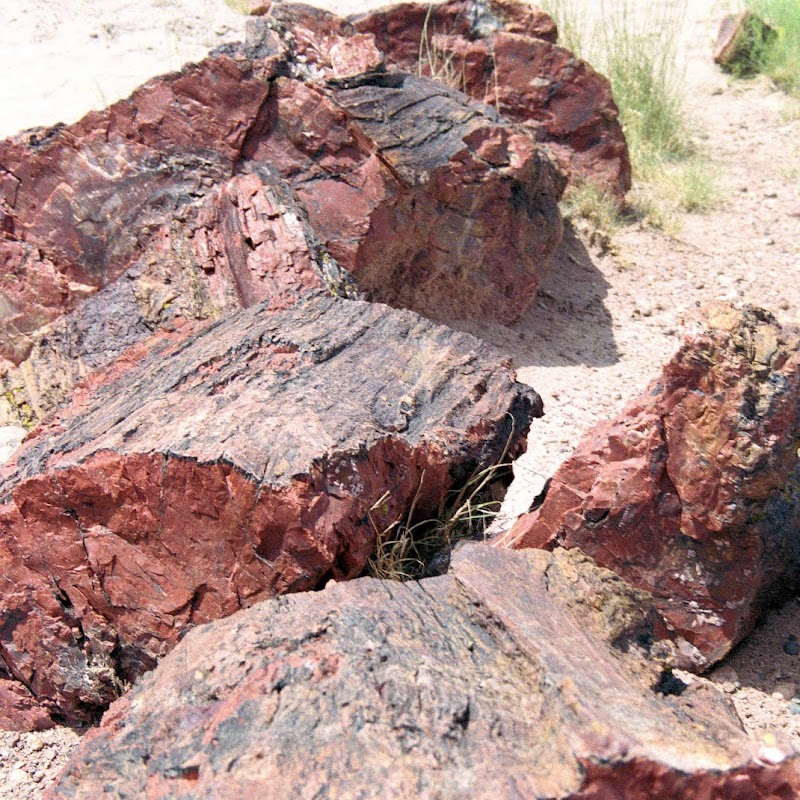 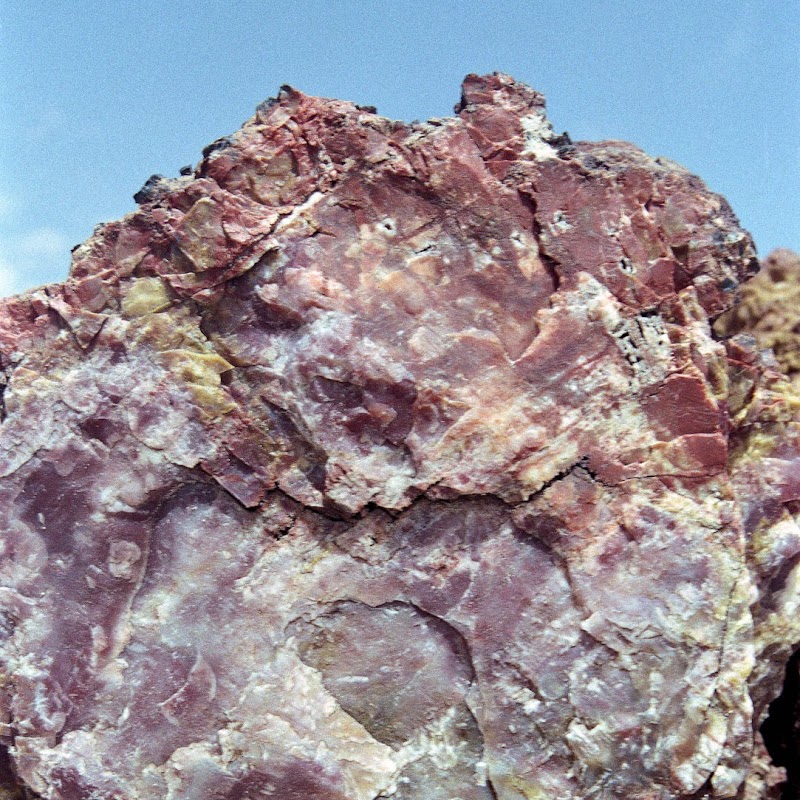 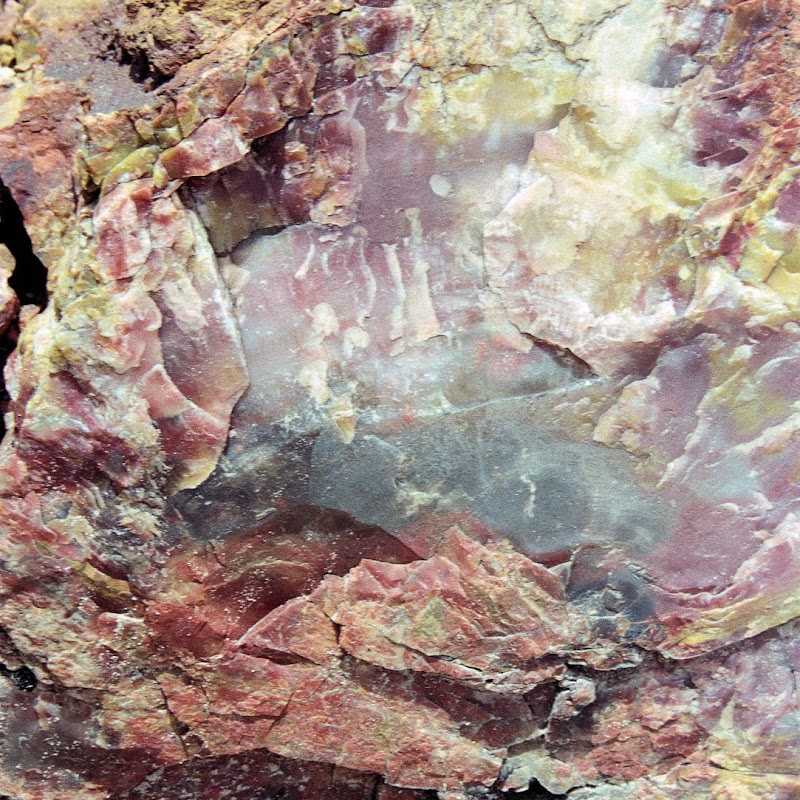 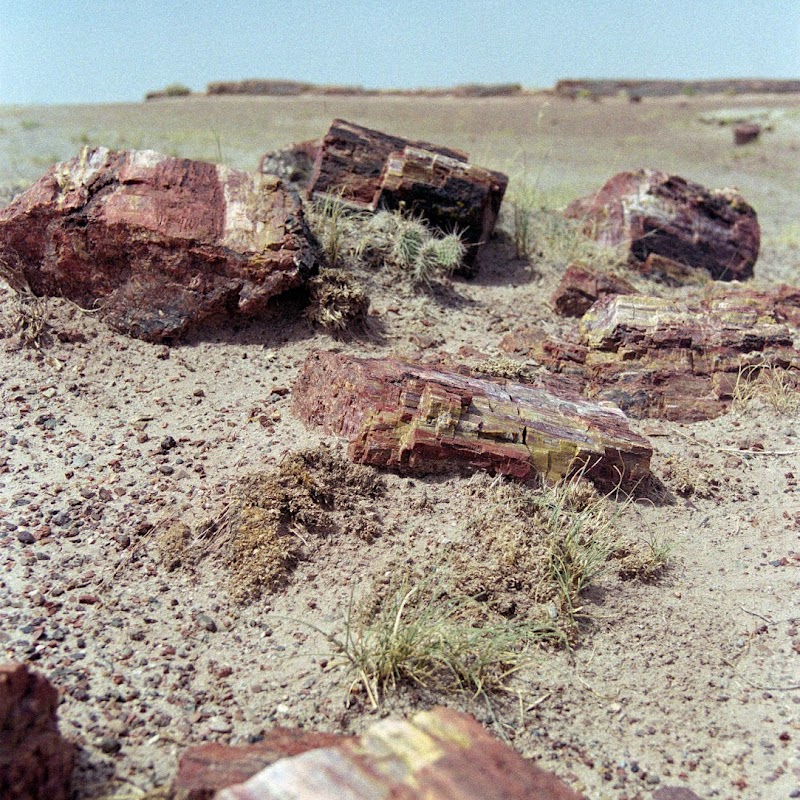 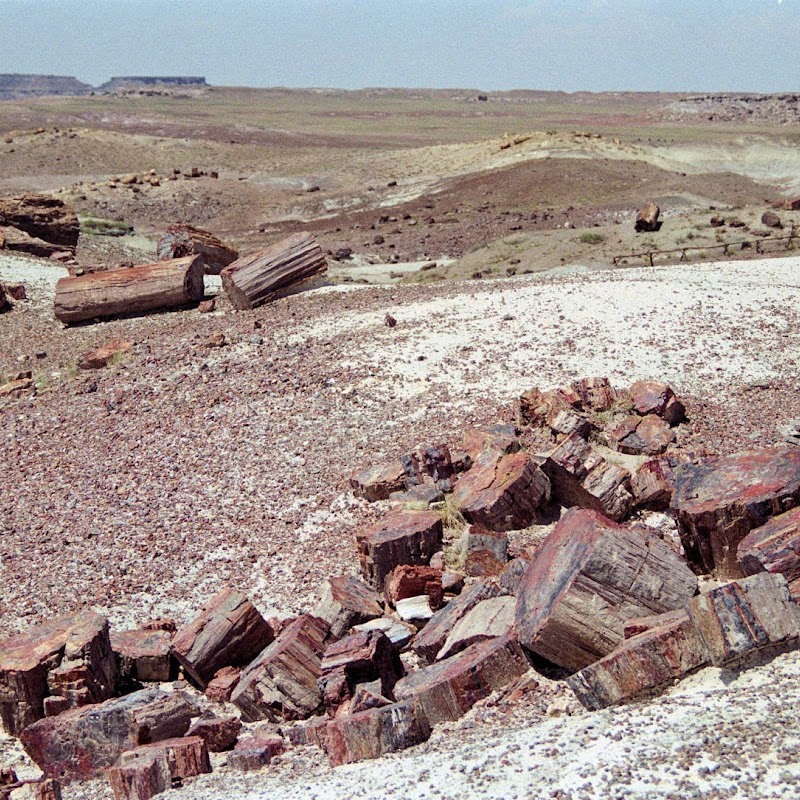 After this loop trail it was time for lunch, so we sat in the car at the Visitor Centre and devoured our jolly nice Subway specials ( and more Pringles ).  And so on to the rest of the park. The nearby Agate House was inaccessible, because the NPS had commissioned a group of navvies to resurface the road, so we proceeded further north towards the Crystal Forest.  This was more spread out than the Rainbow Forest, and so was much harder going, especially because it was mid-afternoon, and getting rather warm.

Next we stopped off at the Agate Bridge.  It’s a bit of a con really, because a previous generation of preservationists put a large concrete lintel underneath to stop it collapsing.  I’m sure this was a very laudable action at the time, but now it just looks silly – why did someone put that petrified log on top of that concrete block over that little creek.  The NPS are more enlightened now and would probably just let nature takes its course rather than trying to prop up bits just because they look funny.

Next up was the Blue Mesa.  This is a very worthwhile part of the park to stop at.  There is a loop drive around the top of the mesa and a couple of hikes.  The biggest one goes into some badlands composed of rounded hills in the Chinle rock formation.  The best feature of the Chinle is the variety of colours you get from the various minerals and substances in the clays, iron for reds, organic matter for greys and gypsum for white.  This is the official description from the books.  What the books don’t say is that the colours seem to change as the light moves around, and red, grey and white doesn’t begin to describe all the hues you get.  The loop trail off the top of Blue Mesa takes you down off the mesa itself so you can see the sides, and other hills.  Very little will grow in ground because it is impervious to water ( amongst other things ) so the effect is a bit of a moonscape – all coloured rocks and no plants.  Around this landscape are scattered chunks of petrified wood, in various colourful hues depending on the minerals in the water which caused the petrification.  It’s obvious therefore that these rocks were able to support vegetation at some point, in fact quite a lot of it if these enormous trees could grow in there.  More likely this was to do with the amount of rainfall at the time rather than the soil.  Apparently the rainforests of Amazonia stand on what would be very poor soil, because most of the goodness is caught up in the vegetation.  I guess the prehistoric forest of Arizona were probably the same, so when it all gets dried and buried and squished up the result is petrified trees containing all the goodness, and dried up impervious clay containing nothing of any use at all.  And now because it’s a desert there isn’t enough growing in it to improve the soil at all.  We have clay soil at home, but ours is rich because it is normally wet ( or at least damp ).  So once plants in our garden get roots more than an inch deep they are into a permanent water supply.  Northern Arizona doesn’t have the water, so no plants, so nothing to improve the soil, so nothing to break the soil and make it take more water, and so on.  And petrified trees aren’t biodegradable, so they don’t help much either. 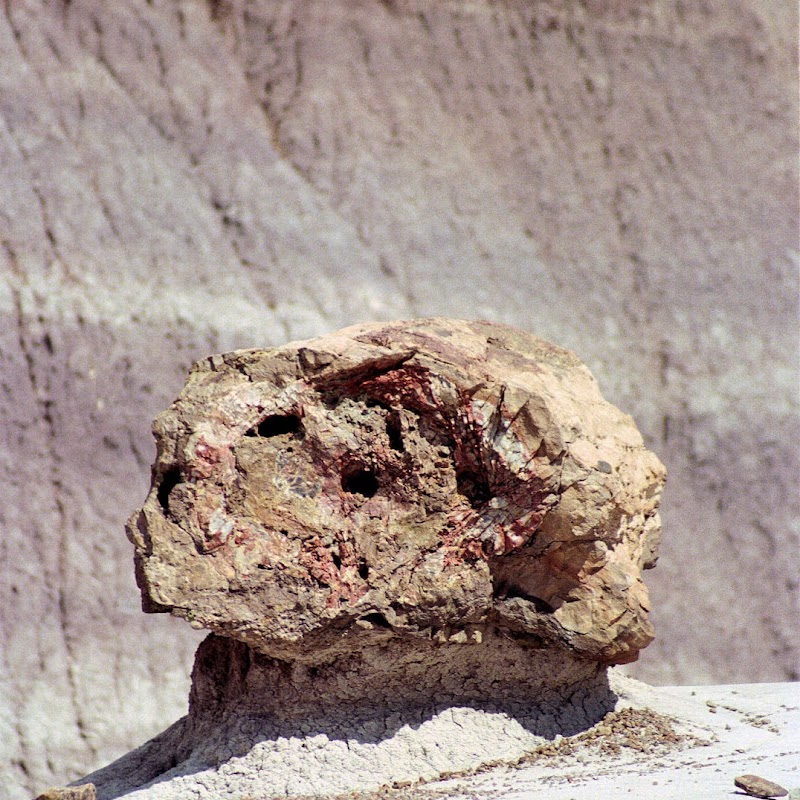 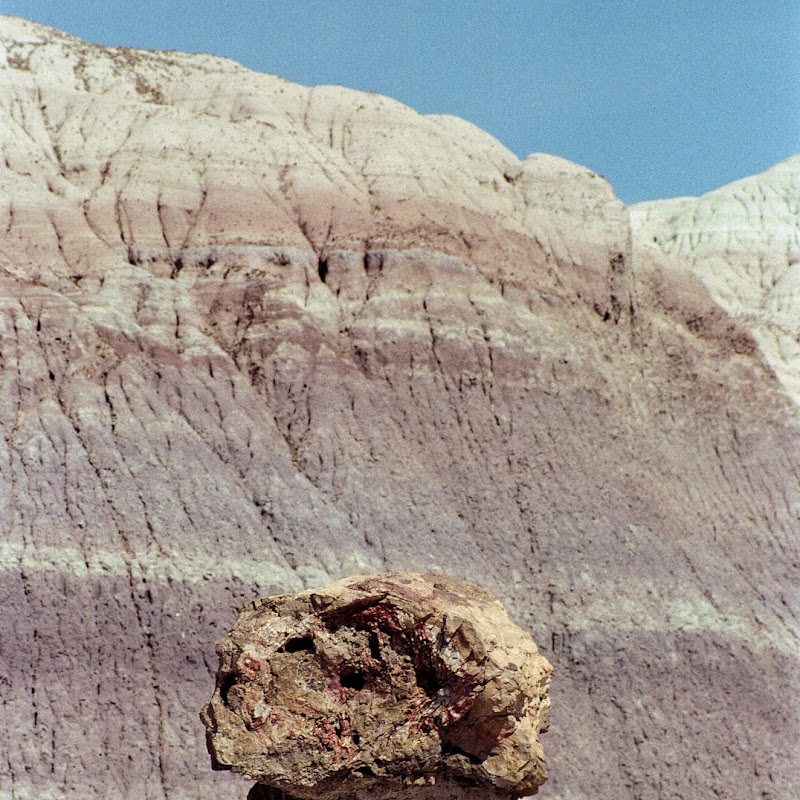 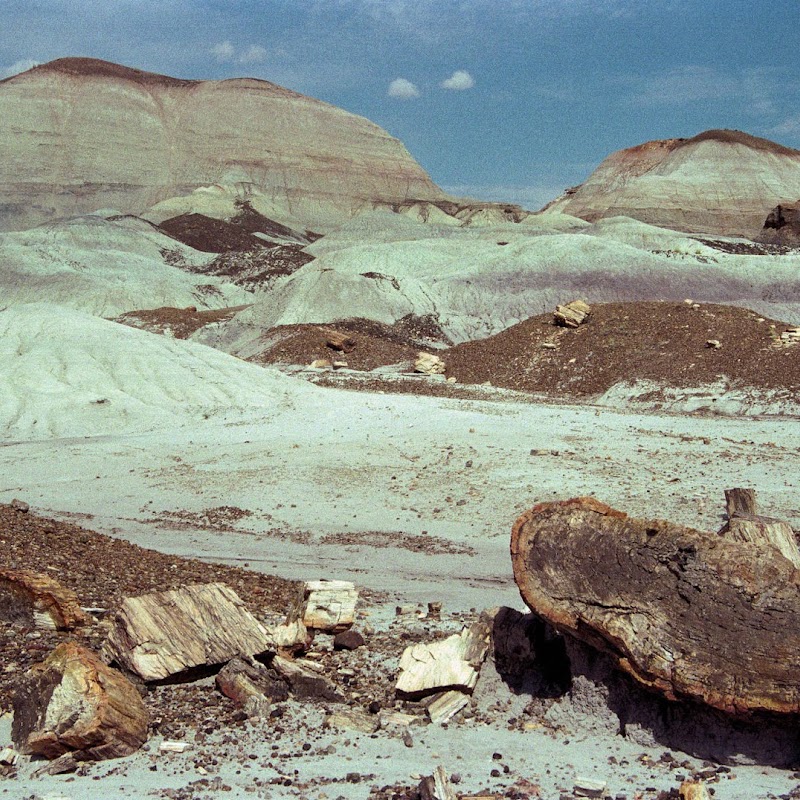 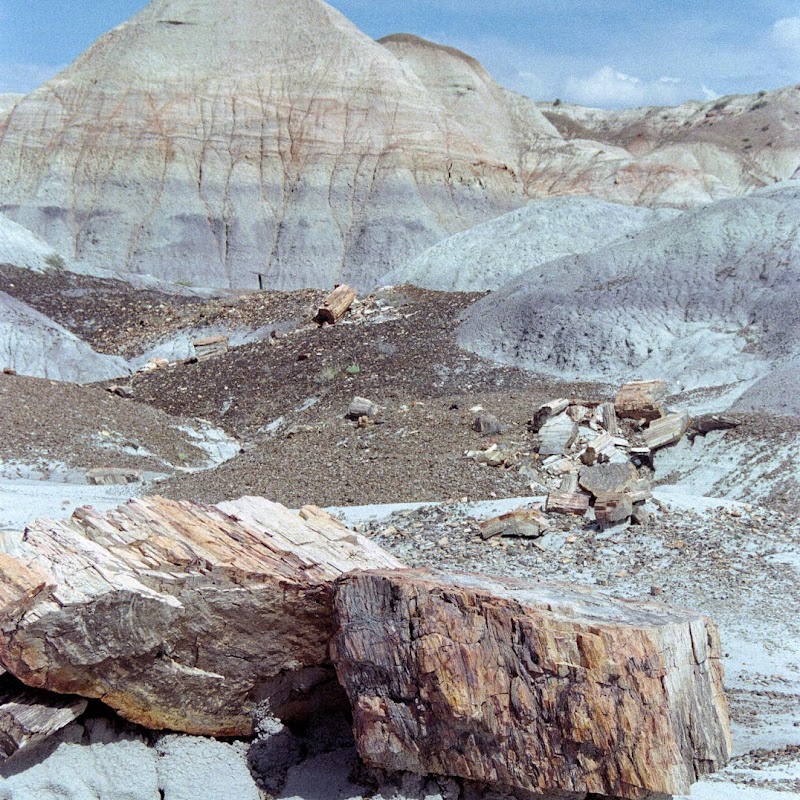 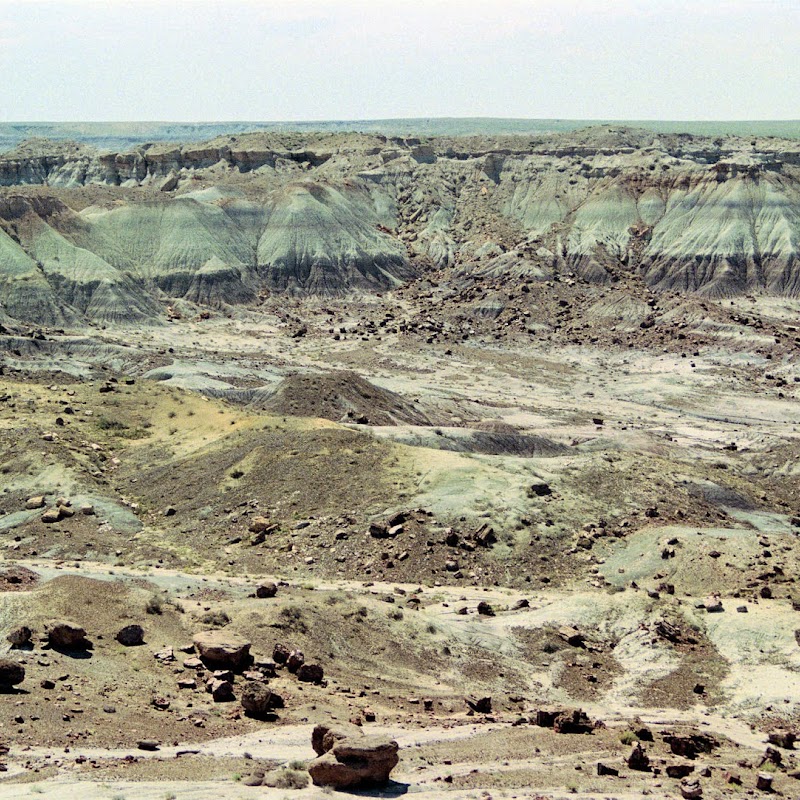 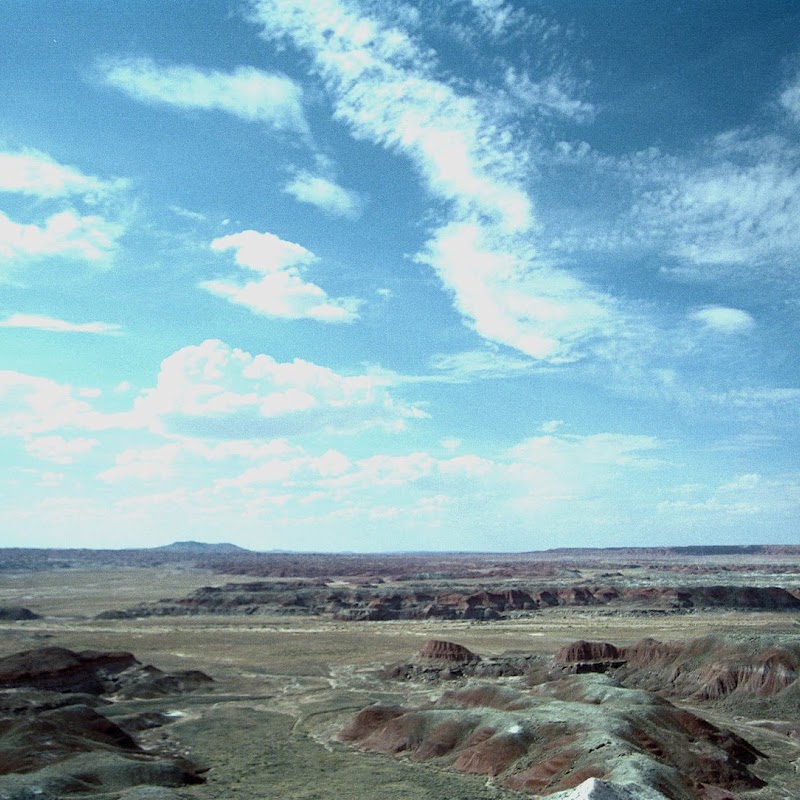 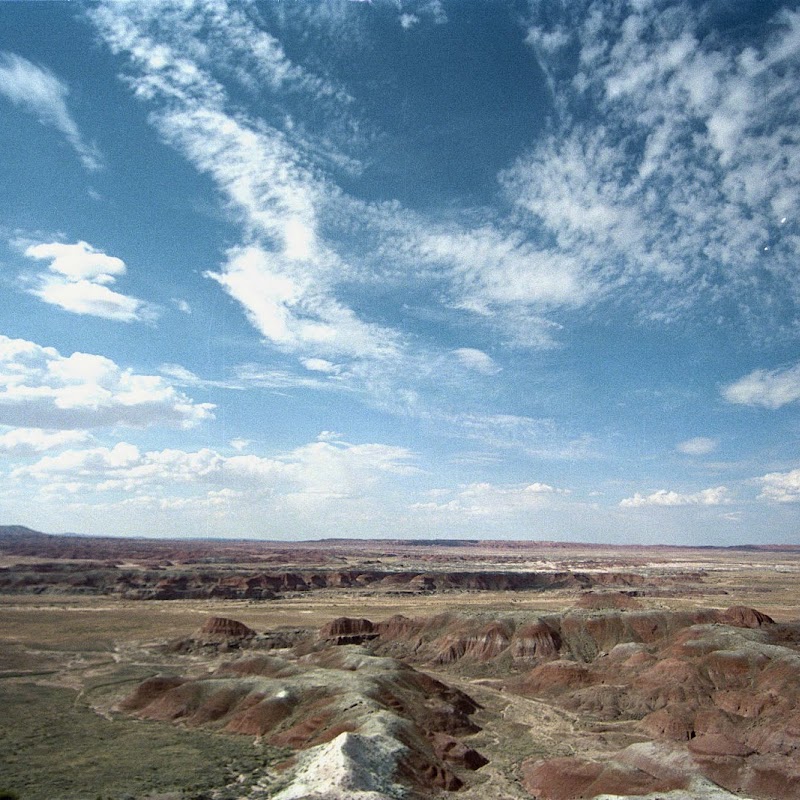 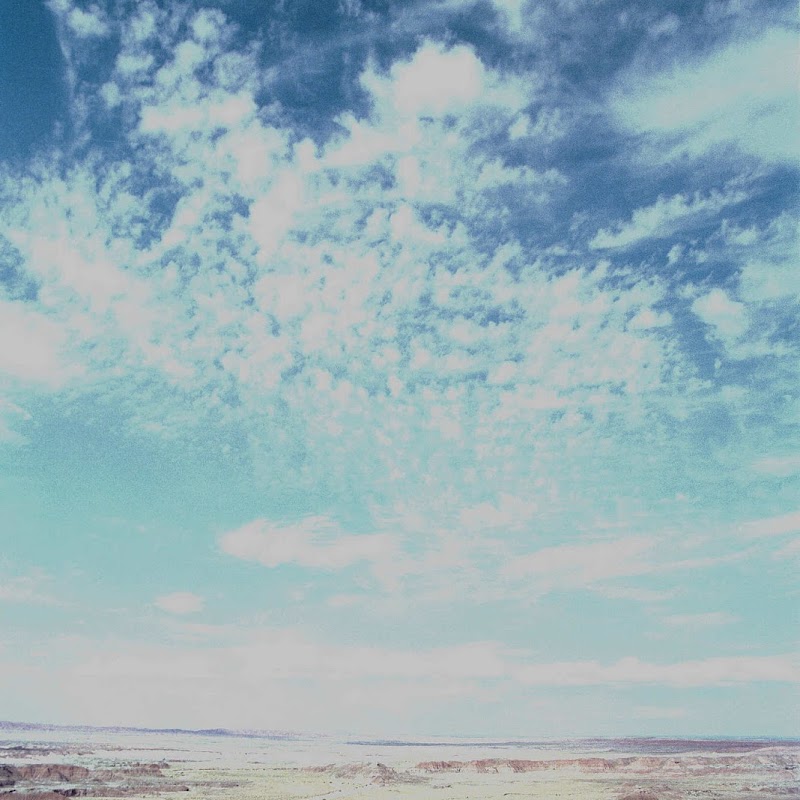 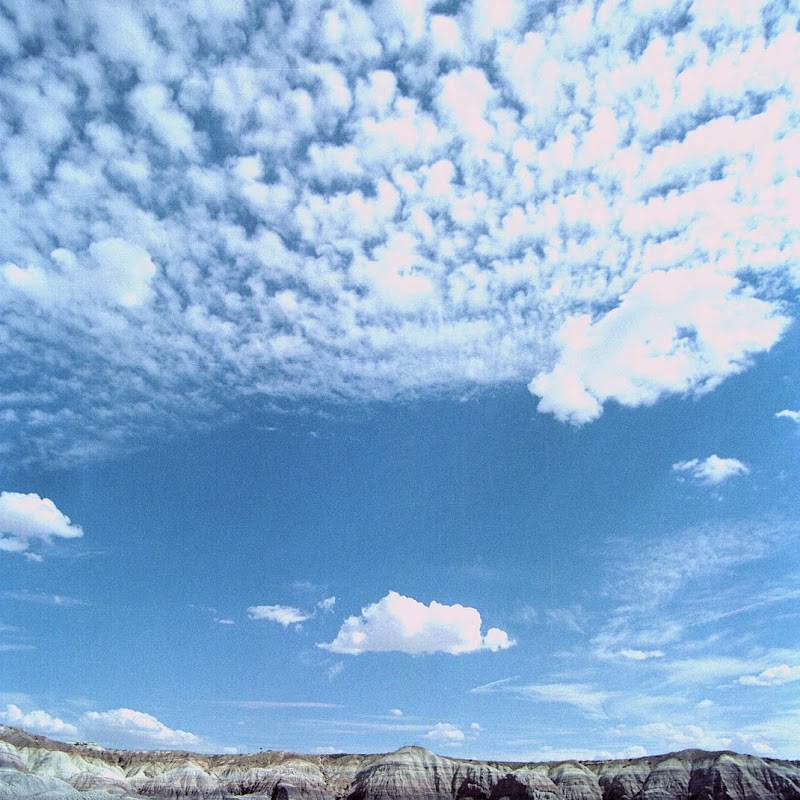 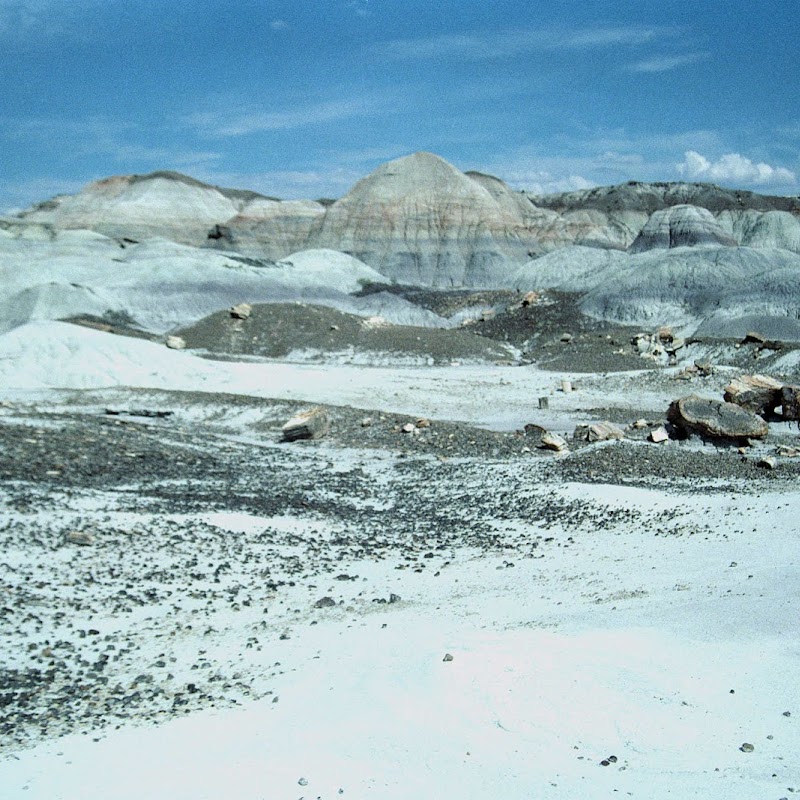 We were a bit kippered after this walk, because it was still pretty warm.  We drove further north over the railroad and over I-40 up to the Painted Desert section of the park.  There are a few stop offs here where you can get some wide views of the desert, with its varied colours.  On the day we were there, we also got the “big sky” effect.  There were a few high level clouds on the day and these seemed to group up into patterns which made the expanse look bigger.  Don’t know why, the sky just seemed big.  It may have been something to do with fairly flat horizon too.

After this lot it was definitely time for some retail therapy, so we dived into the main Park HQ and stores, which can be accessed just from I-40.  There is a fairly good souvenir shop in which you can acquire various bits of cack, plus a good selection of pieces of petrified wood.  These have been officially collected from sources external to the park.  One of the best aspects of the federal protection granted by the NPS ( apart from the ranger service, the good maps, the cheap entry prices and the clean toilets ) is that the protected land really is protected.  American National Parks are different to those in the UK.  In the UK, the National Park Authority is essentially a planning organization, whose main role is to define what type of stone you can use for building.  In the US, the government actually owns the majority of the land and stops any form of development except that mentioned above, for the purpose of making the protected areas accessible.  It is illegal to remove things from American national parks.  Don’t be tempted to steal bits of petrified wood because you can get nicked.  In fact, don’t drag your feet through the dust too much either because deliberately moving things around is illegal too.  This is a fine system.  It’s probably difficult to police, but it is a brilliant idea.  The idea of federal protection is that it should protect.  So any bit of petrified wood you buy must be certified as having not come from the park, but come from various privately owned sources nearby.  If somebody tells you the lump they are selling you came from the park then they are either lying or they have committed a federal offence.

We purchased a chunk about 10cm square and 3 cm thick which contains some nice yellow, red, brown and purple shades, and it now takes pride of place on our mantelpiece.

As well as the lump of rock we grabbed some ice creams before jumping back in the car.  As time was definitely marching on, we decided we would head for Winslow to stay the night.  We didn’t do this for the tourist traps, but more because it was in the right place and was likely to be cheap.  And cheap was pretty much how it proved to be.  Not in a bad way though. We stayed at the Best Western Motel just off I-40, and got a remarkably cheap deal for a good quality room.  The motel itself had good facilities, including an excellent indoor pool which we took great pleasure in using for half an hour or so.  When we arrived there were a couple of other families in the pool, but after a few minutes they left and we had the pool to ourselves.  Excellent. 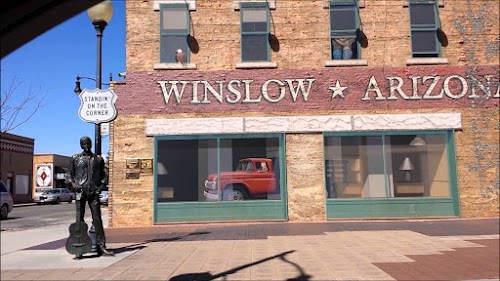 Winslow is also home to maybe the strangest public park I’ve heard of. The Standin’ on the Corner Park is dedicated to the Jackson Browne / Glenn Frey song famously recorded by The Eagles. We didn’t go to it though. It strikes me as a place you’d go for 5 minutes and then scoot off feeling slightly underwhelmed. So we didn’t bother.

A quick clean up was then required in preparation for dinner.  We didn’t really read up on what is available in Winslow, and neither of us fancied driving, so we enquired at the reception desk and they suggested we just try walking under the freeway to a truck stop on the westbound exit.  I’m not sure what I expected, but it turned out to be pretty good.  It was Mexican ( again ) but we were both getting pretty accustomed to Mexican and it wasn’t a problem.  The food arrived quickly, and was substantial, tasty and not expensive.  American truckers obviously have reasonable taste.

The walk back to the motel seemed more noisy than the walk out, and I’m sure it was further as well, but we got back safely and headed for bed, preparing ourselves for a long and fairly dull day to come.