Another substantial breakfast, more packed lunch from the general store and hump the bags into the RAV4 and then time to cross the divide and get down onto the other side of the Sierra Nevada. This is a trip which can’t be done in the winter, or at least can’t be done much of the time, because the road over the top gets a bit buried in snow. Thankfully it was August when we were there, so no snow.

It’s always worth one final drive round the Yosemite Valley one-way system, so we decided to do just that on our way out.  This time, we stopped at about four or five pull outs to take some photos of the meadows and surrounding cliffs.  At the bottom end of the valley there are some good shots of El Capitan and Cathedral Rocks.  As discussed earlier, weren’t any waterfalls flowing at this end of the valley, but never mind, it’s still pretty beautiful.  It also proved to be a great area for engaging in conversation with others there to enjoy the scenery.  There was a father/son combination over from somewhere in Michigan, I think, and I think it took them longer to get there than it did us.  But, on a lovely sunny, bright, warm morning like this, you could see why someone would drive a few thousand miles.

As time was pushing on, and we hadn’t quite planned where we were going or what we planned to do for the rest of the day, we decided to complete the valley loop and head of over the Tioga Road to see what the high sierra was like.  The answer proved to be equally beautiful, but a bit less craggy.  There are hills on the top – big by English standards, but just bumps in comparison to the main valley – and there are lakes, streams, trees, and some bears.  We managed to miss all the bears, maybe because we didn’t leave our pic-a-nic baskets in the car.  First stop was brief wander round and photography session at the side of Tenaya Lake.  It was still bright and sunny, but the chill on the breeze reminded us that it’s a long way up.  There were a couple of little beaches at the lakeside and some really arty bits of driftwood around the place, so some fine opportunities to experiment with depth of field on the cameras.

We then moved on to Tuolumne Meadows with the intention of taking the circular walk round Lembert Dome.  When we got there, though, it looked a bit bigger than we thought it might, and we decided that lunch was more urgent.  So we grabbed our Pringles, bread rolls and packed ham and went for a stroll towards a stream from a car park near the Tuolumne Meadows Visitor Centre.  We managed to find a tremendous spot alongside a little stream babbling over an area of slick rock, with a couple of little falls.  There were a couple of other people there, but I guess they’ve got a right to enjoy the countryside as well.  We were getting sunburnt, but the breeze was still there to remind you of the altitude.

Lunch finished and we had decided on our objective for the day.  We’ll drive up to Mammoth Ski Resort for a quick look at the interestingly named Devil’s Postpile National Monument ( www.nps.gov/depo/ ).  So we drove out of Yosemite on the eastern side, with some top views over Mono Lake and the vast expanse of Nevada.  Mammoth is a half hour or south and then back up towards the mountains.  The road up proved interesting, and we ended up at the north end of the town and turned directly uphill towards the ski base station.  Thankfully this is where we needed to be, but the presence of the National Monument up there didn’t seem to be well advertised.  Neither were the parking arrangements.  I think we passed ( and didn’t read ) a sign telling us to park up at the ski base station and catch a bus, but as we missed it, we just followed the road to the top of a hill, until we reached a station where we were told we shouldn’t have bought the car here – busses only.

OK, back down the hill and park up miles from the bus stop, and then stand in line waiting for a bus.  They didn’t seem to be that frequent, because there isn’t much room for turning buses round in the valley behind the ski area, so I think we waited about 30 minutes and got a bit cold. We were both just dressed in shorts & t-shirt. But we eventually got onto a bus and followed it down the valley to the drop off for the Postpile.  This is a wall of crystalline basalt columns in hexagonal shapes, which are gradually falling away with erosion.  For those of you who’ve been to Northern Ireland, the shapes are a bit like the Giant’s Causeway except the side is exposed, rather than the top.  There’s a scree slopes of hexagonal sectioned lumps around the base and a few interesting bits where the heat and pressure forced the columns off the vertical.  It proved to be another top site for testing depth of field, trying to get both rubble and posts in focus at the same time. 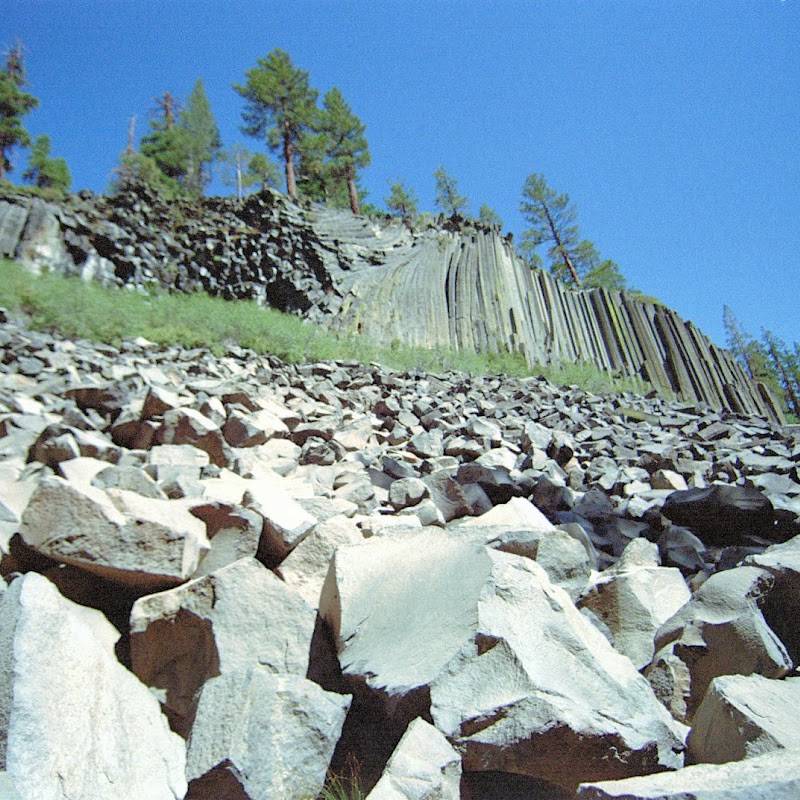 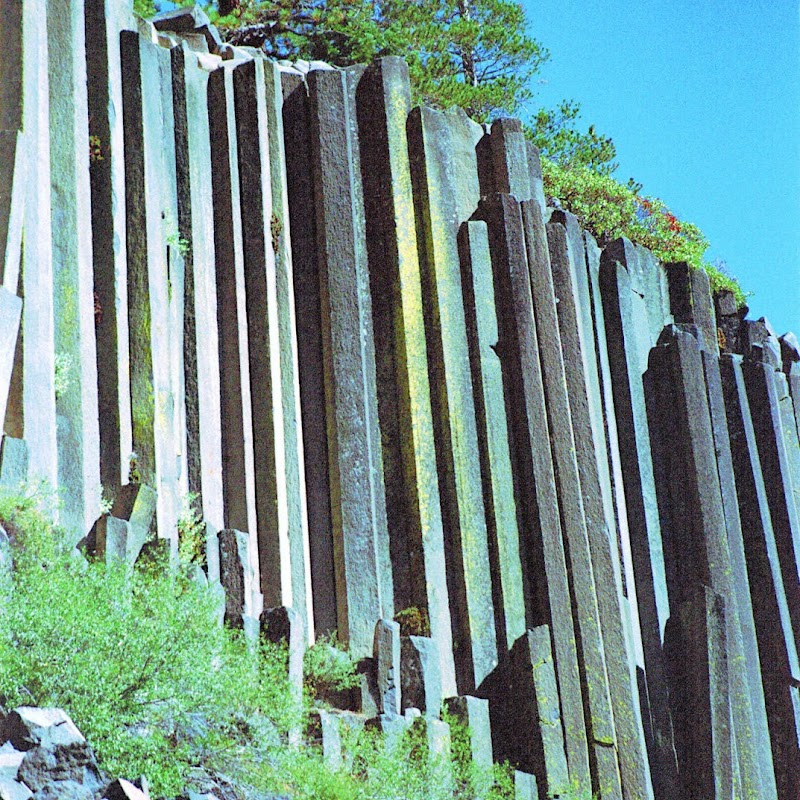 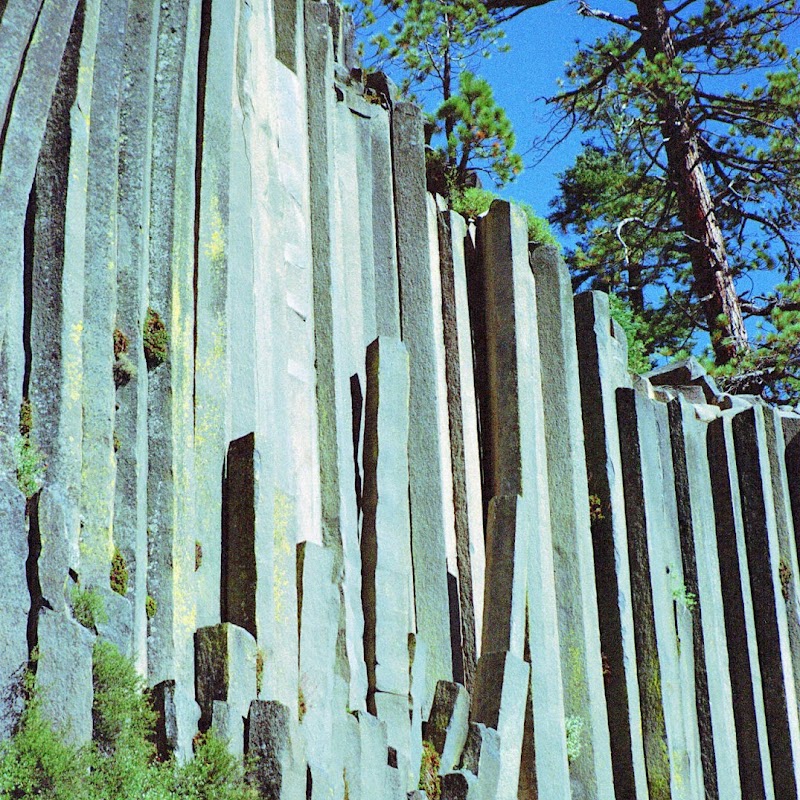 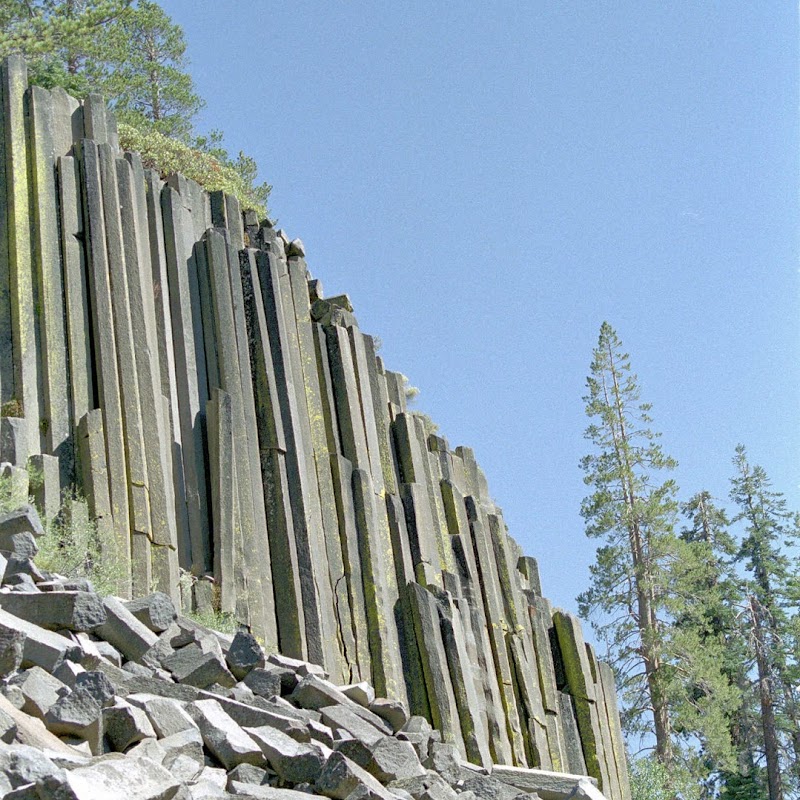 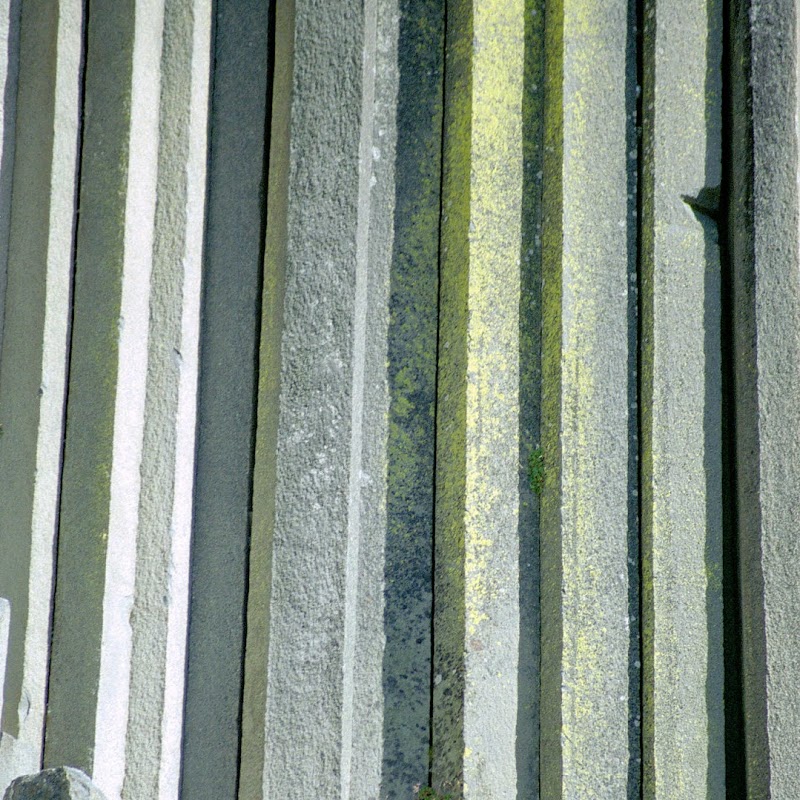 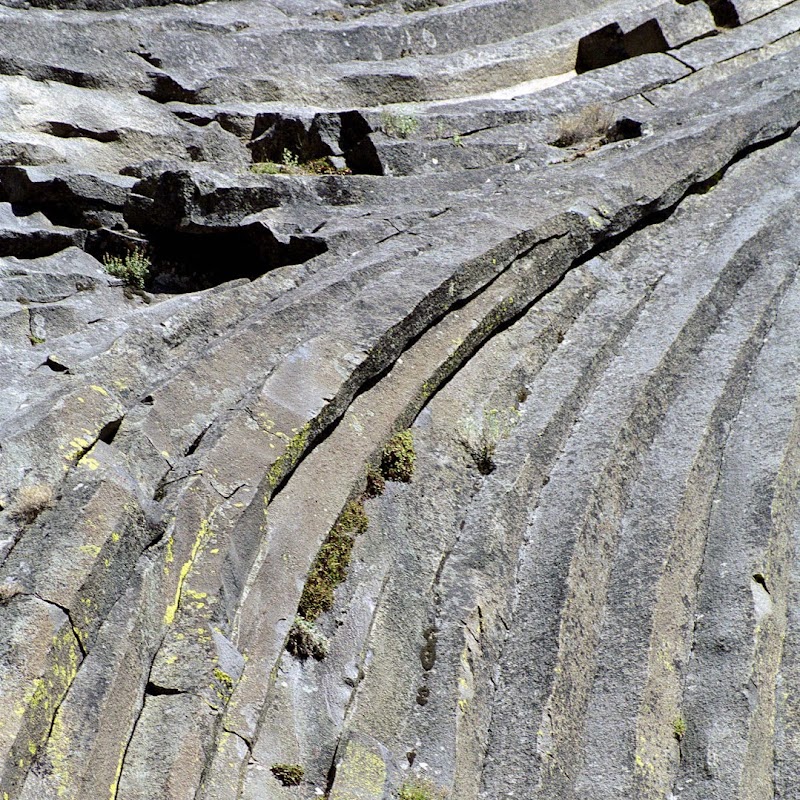 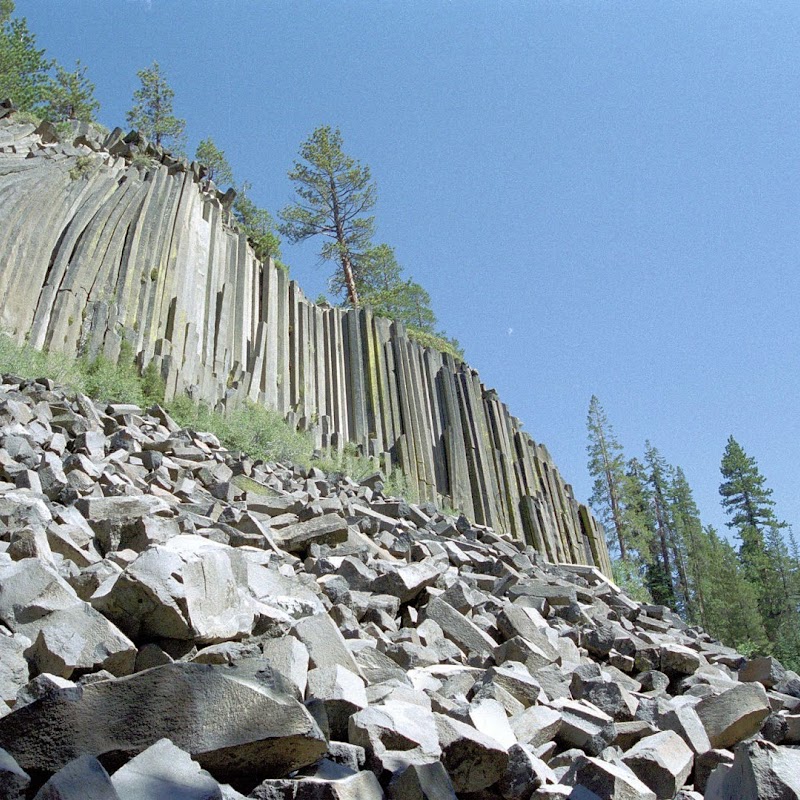 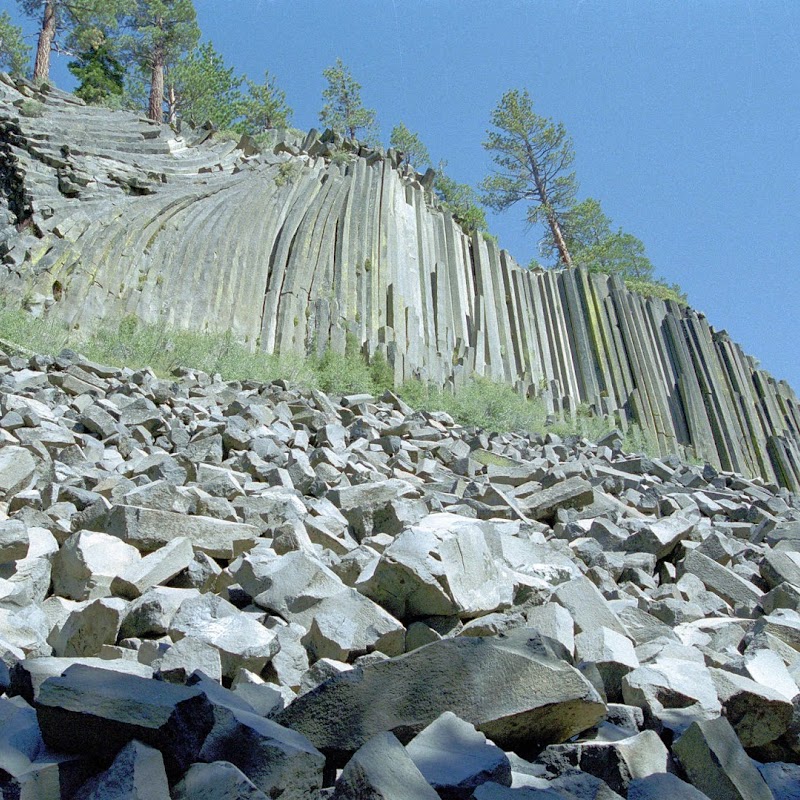 By this time, it was getting a little late, and we had yet to decide where we wanted to spend the night.  So we got back to the ski station and went for an ice cream and some planning.  We decided that there wasn’t much of interest in between here and the next big objective, Death Valley.  We also decided that Death Valley was big, so a) we wanted to stay in it and b) we wanted to get there on this day.  Out came the Moon Guide for Southern California to get some phone numbers, and we bought a phonecard so we could make use of the payphones.  The Furnace Creek Inn was a bit expensive, so we decided on the Stovepipe Wells Village Hotel. The booking conversation went something like this:

“Do we need to give you a credit card number to reserve the room ?” said I

“OK, we’ll take the room, and we might be a bit late, because we’re still at Mammoth Mountain”

So we made a quick hike back to the car, drove through central Mammoth Lakes for fuel, and then turned south for the next adventure, and judging by the scale of the map, it was going to be quite late by the time we got there. 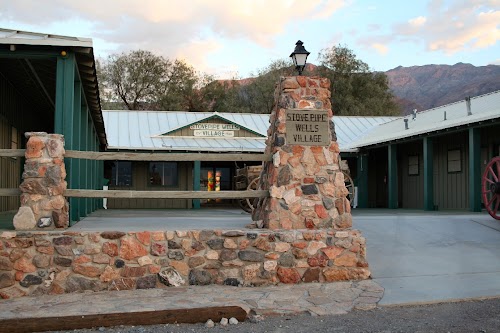 The drive down to Lone Pine is a bit dull.  A series of straight stretches of road with small agricultural towns which, by European standards, are a long way from anywhere.  Then you turn east towards Death Valley, and you start to realize why you’re making the effort.  The road in from this side is a bit winding as you enter the park and cross over the Panamint Range into the main valley.  By this time it was getting late, and the headlights were on.  The sun was behind us, so we got low level illumination of the area we were driving into, with our car casting a long shadow in front of us, and eventually no shadow at all.  The colours were very interesting with hues of red, orange and purple.  I don’t know whether this was the rocks, or the light, or both, but whatever it was it was gorgeous.

Stovepipe Wells is a tiny settlement, consisting of only about six buildings, and four of these belong to the only lodgings in town. It was fully dark and were fully hungry, so we decided to check in quickly, get into our room, and then see what the motel had to offer by way of food.  The restaurant seemed to just do an all-you-can-eat buffet, which sounds like a good idea, but it was late in the day and some of the dishes were finished for the night, and others didn’t look that appetizing, so we contented ourselves with a plates of something containing chicken and rice.  It turned out to be quite expensive as well, but then I guess when your nearest competition is 40 miles away and your nearest convenience store isn’t very convenient at all you can get away with more or less anything. At least the beer was cold and wet.

There were a few others in the restaurant room and they all seemed to be Europeans.  It must be off season for the locals.

Another long day, and time for a long snooze.